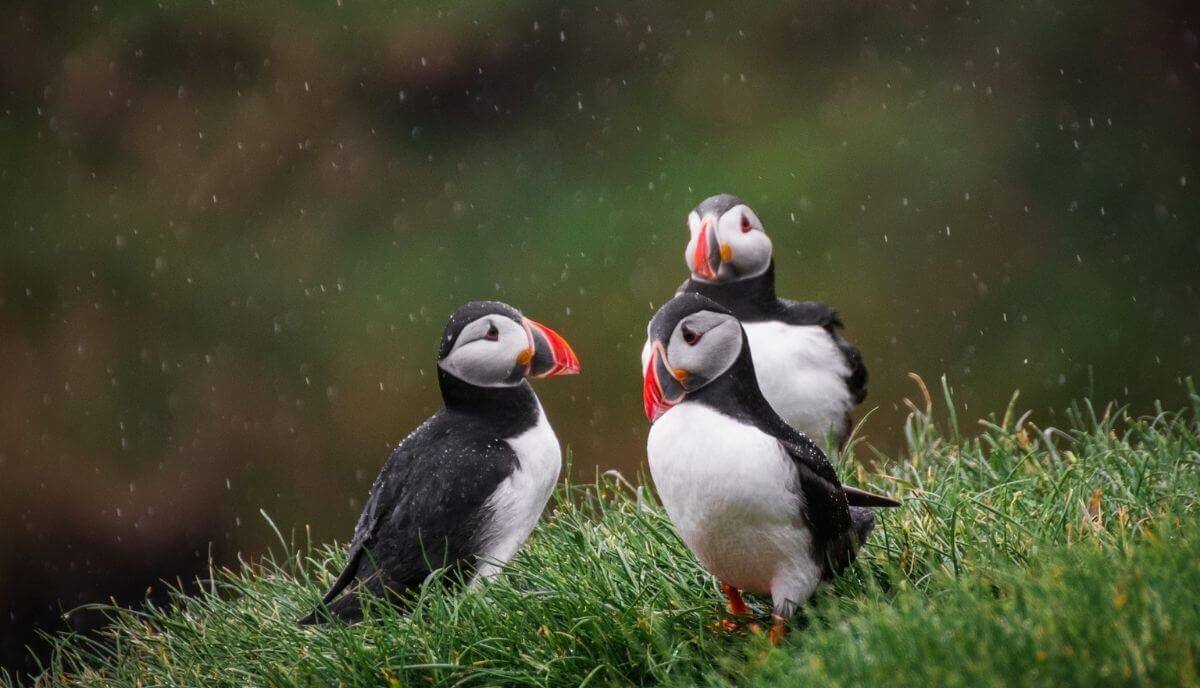 I have an acquaintance who adopted three birds from a local rescue shelter. He invited me for a visit after he learned about my love for animals.

As soon as I entered his house, the first bird that got my attention was a toco toucan. I was amazed at how beautiful its beak was in person.

That made me wonder whether there are other birds with colorful beaks?

After learning more about the toco toucan, I discovered that there are a lot of birds with beautiful and colorful beaks.

Some of them even have rainbow-colored beaks. Interestingly, there are reasons behind their multi-colored bills.

Let us discover about these birds and their colorful beaks: 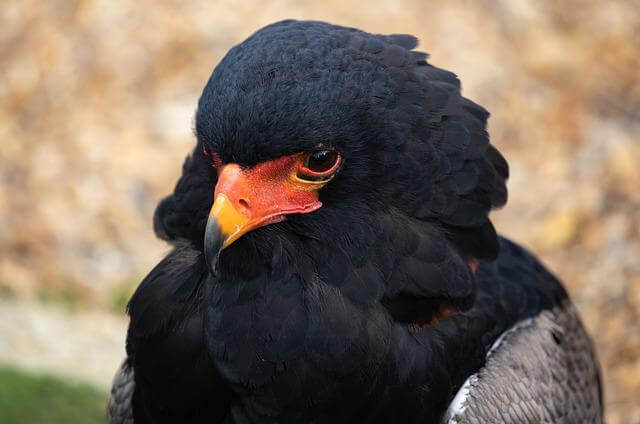 Unlike its bright, striking, multi-colored face and beak, the Bateleur feathers have a darkish, white, and brown color.

These eagles are generally found around East and South Africa and some parts of West Africa.

Bateleurs seem somewhat aggressive when they fly as these eagles rock their wings side to side. They often perform summersaults in the air and clap their wings.

These raptor birds also scream when they dive, which sometimes makes them pretty noisy. It is pretty ironic as they are quiet flyers that spend eight to nine hours a day flying for hundreds of miles.

Interestingly, you can also detect the Bateleur’s mood based on their skin color.

When their skin is orange or pale red, it means they are relaxed. If their skin turns bright red, it interprets that these eagles are agitated. 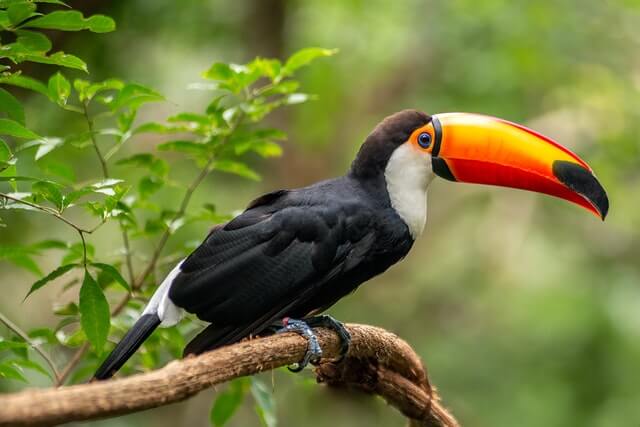 Toco toucan is the most popular breed in the toucan family. Being the largest toucan bird, they carry the nickname the giant toucan.

Its beak is seven-inch long with bright orange and yellow shade. It is in great contrast to the toco toucan’s black and white feathers.

These birds mainly live in South America. However, the toco toucan became a popular exotic pet, making them more present in other parts of the world.

If you plan to have a toco toucan as a pet, you must remember that they are hard to take care of. Also, in many countries, it would be illegal to keep them and they are protected by the law.

As for their beak, it is actually lighter than it looks. It is outer part is made of layers of keratin tiles, while the interior consists of bony fiber material that resembles foam. It also has a hollow area so it’s much lighter than most people think by looking at it.

These birds are not good flyers and rely on hopping as a way of locomotion. 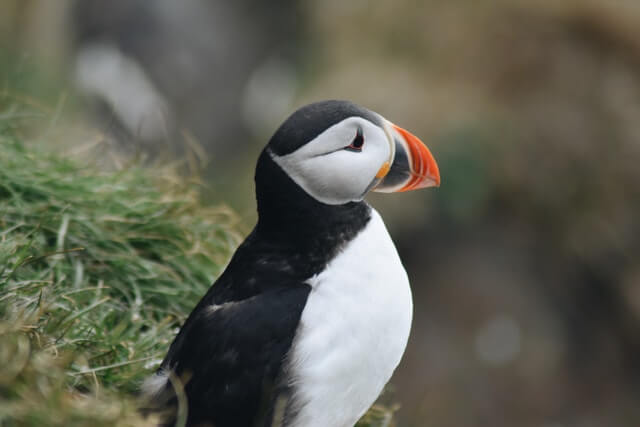 These small black and white birds are frequently misinterpreted as penguins. However, puffins are smaller than the latter in terms of physical appearance.

Besides their adorable looks, puffins have gathered attention because of their multi-colored bill. It has orange, black, and yellow colors all over its beak.

These seabirds are carnivores, mainly preying on sand eels, fish, and herring. The Atlantic puffin’s appearance has also reminded people of a parrot, hence the nickname – sea parrots.

Interestingly, the colors of their bill and legs change depending on the season. It will turn dull orange during the winter season.

However, the puffins’ beaks and feet become brighter as soon as spring comes.

Their bright bills are not only stunning to us (bird lovers), but female puffins are also more attracted to males with the most colorful beaks and plumage.

Puffins’ beak is even more remarkable because it glows under black light, just like glow-in-the-dark toys. 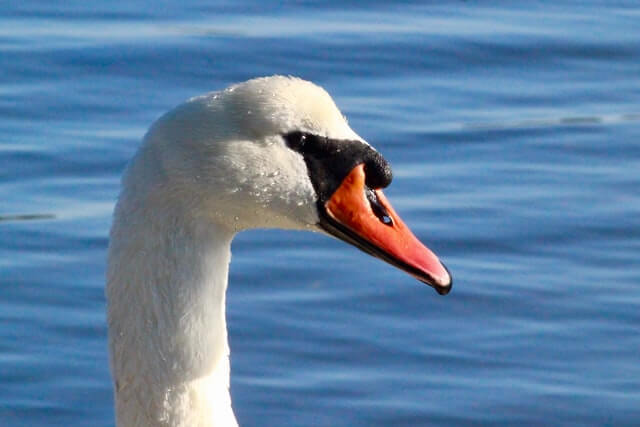 Mute swans are famous for being one of the most graceful animals on the planet. It adds that they have a beautiful orange beak with a black base to enhance their pure white feathers.

These water birds live in North America, Europe, and some parts of Asia. Mute swans are large birds that spend nearly their entire life on or near the water.

They even sleep on the water which is also a helpful way of protecting themselves from land predators. Because of their short legs, they look awkward walking on land. In contrast, their swimming is calm and gracious.

Swans are described as elegant with their long, slim neck and wide, large wings. Even though they are white, they are often hatched in dusky gray with gray-black bills.

Because of their looks, swans are often the cover or part of fairy tale stories. Most people would instantly remember mute swans when asked about the ugly duckling story.

Unfortunately, mute swans became an invasive species that destroyed wetland plants in some states. It removes food sources for native birds in the area. 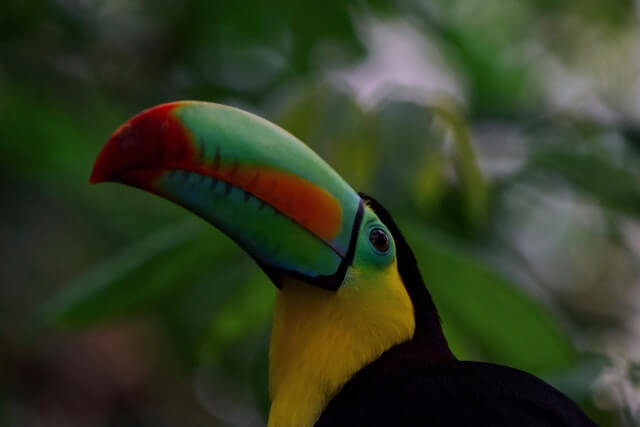 Similar to their cousin toco toucans, keel-billed toucans have an enormous bill. These birds with colorful beaks live in the rainforests of Mexico, Venezuela, and Colombia.

Keel-billed toucans’ beaks have a light green base, red-colored tips, a dash of orange on the upper beak, and a short blue coat on the lower part of the beak.

Depending on where you live, it could be illegal to own these birds or you would require a special license.

There are various territories of why keel-billed toucans have such large beaks. Attracting mates, scaring away predators, and feeding are some of the most common ones.

And while it does serve those purposes, the most critical role of toucans’ long beaks is to regulate the body temperature. (source)

Animal experts have discovered that toucans are able to move the blood to the different parts of the body depending on how warm or cold it is in their habitat.

These toucans are intelligent and friendly, which makes them easily trainable bird species. If you ever adopt one, make sure to treat them with fruits and berries after every stunt.

Although tolerant of human presence, keel-billed toucans can be aggressive as they have an inherent feisty personality. 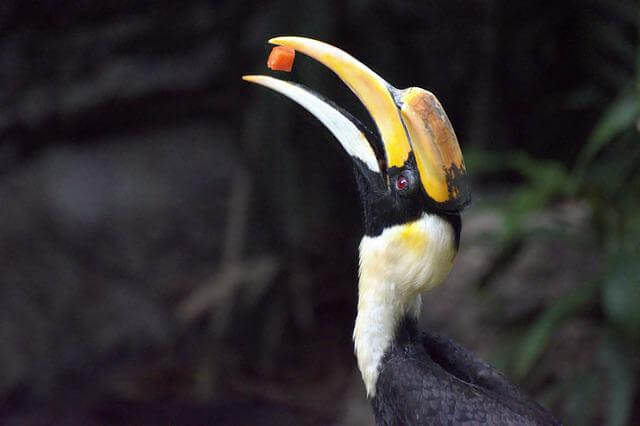 Great hornbills have one of the most interesting physical looks among birds. Besides their hooked beaks and striking yellow-black colors, these birds look as if they are wearing a yellow hat.

The upper part of the great hornbill’s beak has a stronger yellow tint, which appears almost orange. In contrast, their lower beak has a lighter, practically whitish-yellow color.

These colors can be a result of the bird’s rubbing its beak against the preen gland beneath the tail. However, it only applies to a few specific hornbill breeds.

Like with toucans, the unproportionaly large beaks of hornbills actually help the bird to dissipate the heat. In addition, their beautiful colorful beaks provide a few other functions, such as attracting mates, making resonant sounds, and even peeling off the tree bark.

Unfortunately, due to their striking appearance, great hornbills are often targeted by poachers, which makes their population threatened. 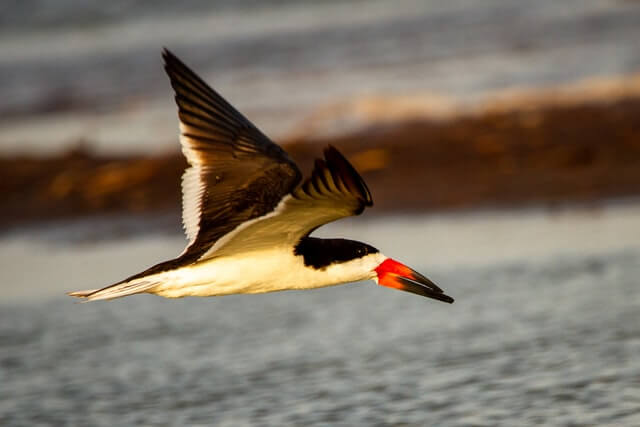 Black skimmers spend most of their time along coastal shores and sandy beaches. However, some find their homes near Florida and California lakes.

They are easily recognized by their orange base beaks with black tips. Colloquially some people call them the ‘birds without eyes’.

Unlike other birds, black skimmers’ eyes are hidden in their black feather, and it is so well-blended that some think these birds do not have eyes.

Black skimmers have large dark pupils that narrow to compensate for water surface glares and help hunt during a dim light.

They were once hunted almost to extinction. However, the trend for black skimmers’ meat eventually stopped.

You might spot a colony of black skimmers on a beach, a great spot to observe them from afar. These birds tend to stay in the same site after they establish it. 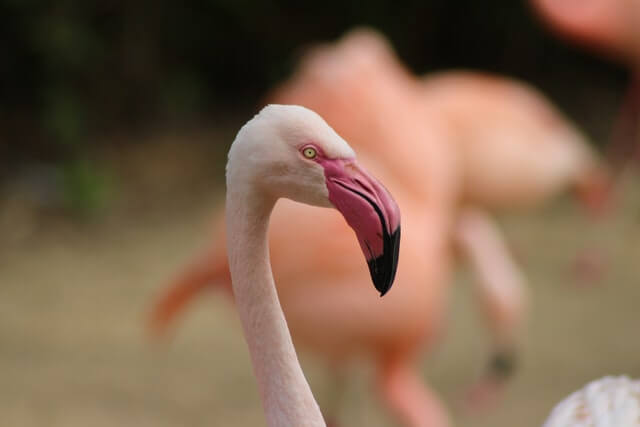 Flamingos are well-known for their iconic pink color. Sometimes, it is not only their feathers that are pinkish but also their beaks.

Most flamingos have curved beaks with pink bases and black tips. Some have brighter, almost red beaks, and others have an almost whitish-pink one.

These fascinating birds are spread on most continents, such as Asia, Africa, and Europe. Flamingos will flock around highly salt-concentrated lakes.

Interestingly, flamingos will drink water from boiling geysers, and they have the ability to excrete salt using the salt glands found in their nostrils.

Another fascinating fact about these birds is that their color comes from the food they eat. Flamingos eat microscopic algae and shrimps containing carotenoids.

Once they metabolize the food, the pigments then turn their feathers pink. Fancy! 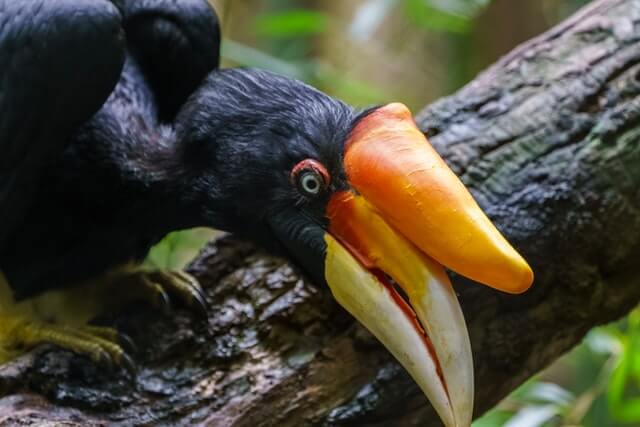 Rhinoceros hornbills are the biggest forest hornbills, weighing six pounds and measuring up to 90 centimeters. However, their immense stature is often overlooked because of the large orange, red and white beaks.

People might misunderstand the second bill on their forehead. It is merely a hollow keratin structure creating the impression of a horn, where the name hornbill came.

Like great hornbills, rhinoceros hornbills are a species with a striking beak color because they rub their beaks in the preen gland beneath their tail. It stimulates the production of outstanding colored bills.

Despite having large beaks, these exotic birds pose no danger to humans, and they are not aggressive to any individuals that may come their way.

If feeling threatened, rhinoceros hornbills would prefer to fly away from the location. 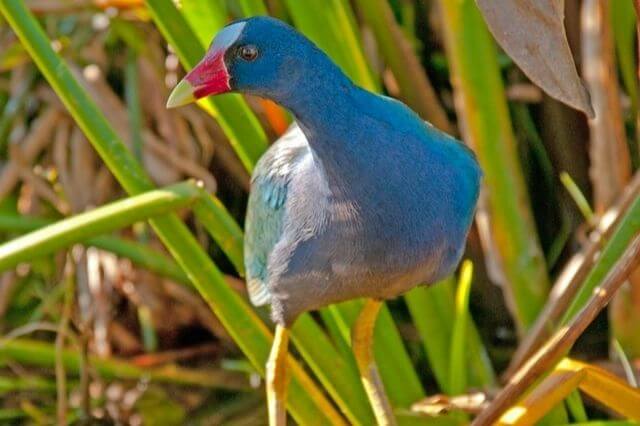 These gorgeous birds enjoy living in the dense freshwater wetlands.

Unlike other water birds, you can spot American purple gallinules walking on floating vegetation, such as water lilies and lotus, instead of swimming.

American purple gallinules’ yellow and red beaks stand out with their dark blue to purple feathers.

The color of their beaks may vary from one another. Some have darker orange, almost red color, while others have a bright shade of red.

However, all of them share the yellow-colored tip on their beaks.