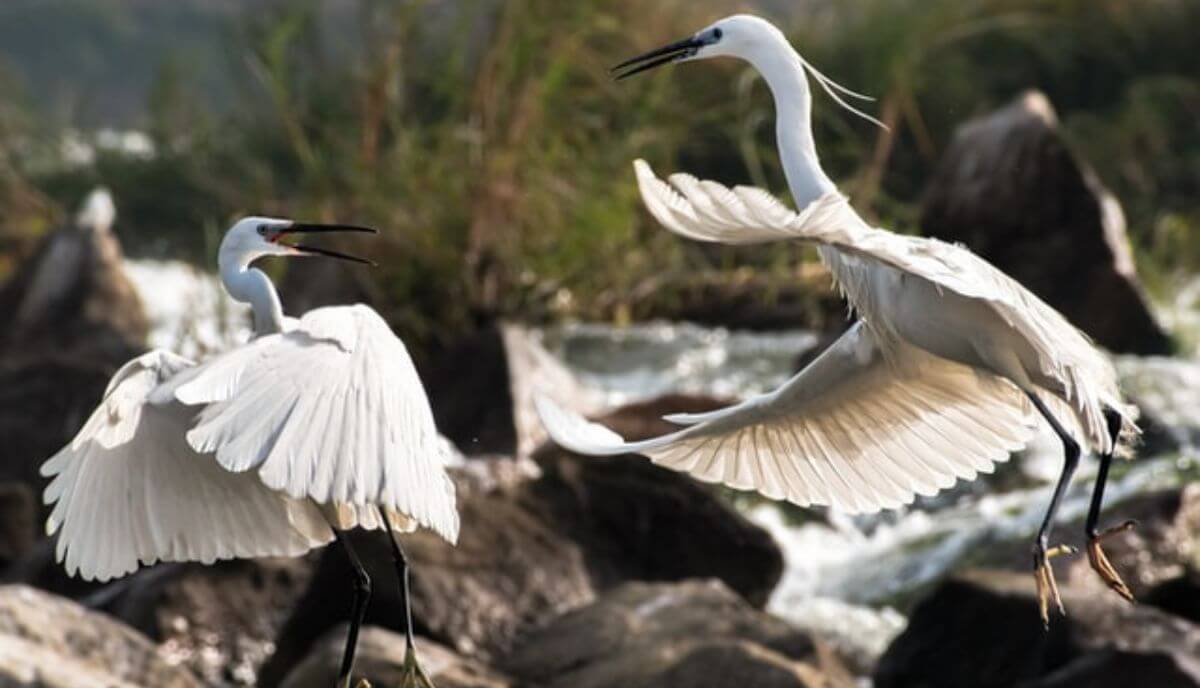 The white color is usually associated with the attributes of dignity, purity, and tranquility.

On the other hand, the black color symbolizes elegance, mystery, and sophistication.

White birds with black beaks embody a mix of these characteristics while looking immaculate in the wild.

This has led me to write an article on ten white-feathered birds with black beaks (which you will likely find on a peaceful stroll along the lake, pond, or beach). 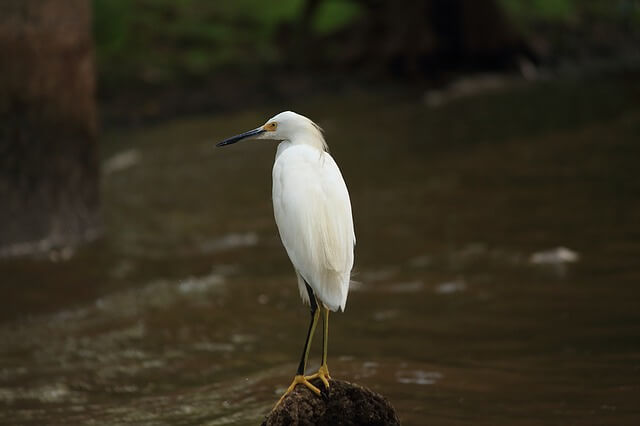 Coloration and identification: The snowy egret is an easily recognizable bird. It is a medium-sized heron with all-white plumage, a long neck, an equally long slender beak that is black with a yellow patch on each side, and yellow feet.

Adult snowy egrets have black legs while immatures have a more greenish pair of legs.

Distribution and habitat: These elegant white-colored birds with black bills are widely spread across South America, Central America, and the Caribbean. In North America, they are found throughout Mexico and sparsely across the United States.

Snowy egrets establish themselves in aquatic habitats, saltwater or freshwater areas, shelter bays along the coast, and marshes. Although rare, you might find snowy egrets in fields.

Nesting: Along estuaries, snowy egrets build their nest in shrubs or trees. Nests can be made on the ground or in trees up to 30 feet above the ground. 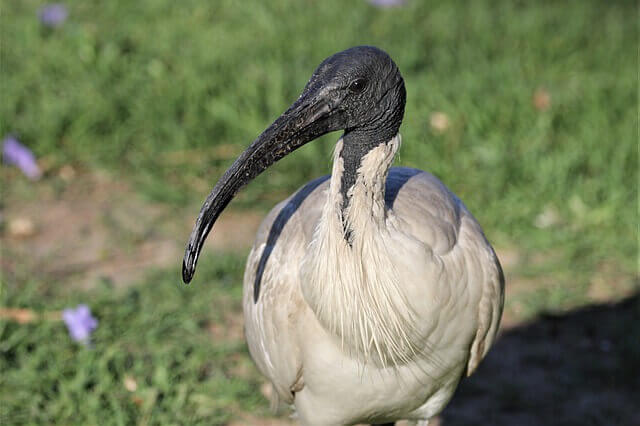 Coloration and identification: Australian white ibises are almost all white birds with black beaks. Their pure plumage is bordered by a bare black neck, head, tail, and black legs.

In addition, An Australian white ibis has a long under-curved beak, which measures up to 6.6 inches in length.

Distribution and habitat: Australian white ibises are native to most parts of Australia, some parts of Oceania, and Southeast Asia. They thrive in marshes and wetlands close to grasslands.

Nesting: Like snowy egrets, they build their nests in colonies filled with other birds and herons. Nests are usually built among tall reeds or trees close to water sources. 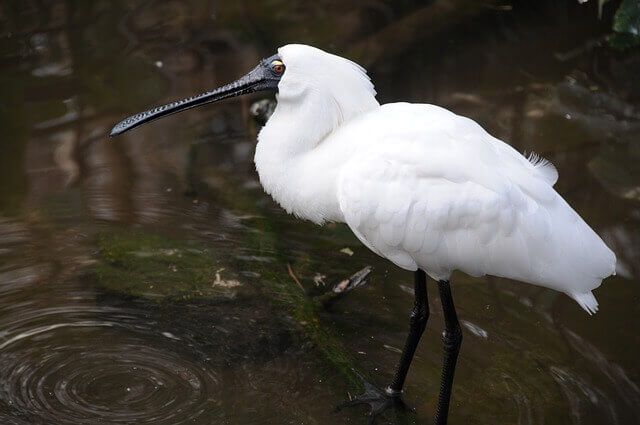 Coloration and identification: Royal spoonbills have a pure white plumage. Their feet, neck, as well as their bills are very long and inky black. Royal spoonbills’ earned the ‘spoon’ in their name from their spoon-shaped slender beak.

Apart from their enormous black bills, another exciting feature for adult males during breeding season is a mass of overgrown crest of feathers on their heads.

Distribution and habitat: Royal spoonbills’ range is restricted to Oceania. They are found in Australia, New Zealand, Papua New Guinea, Indonesia, Solomon Islands, and even as vagrants in New Caledonia.

Nesting: Royal spoonbills build sturdy nests from twigs, sticks, leaves, and water plants. The nest is placed at any height in the crown of a tree or reeds along water courses. 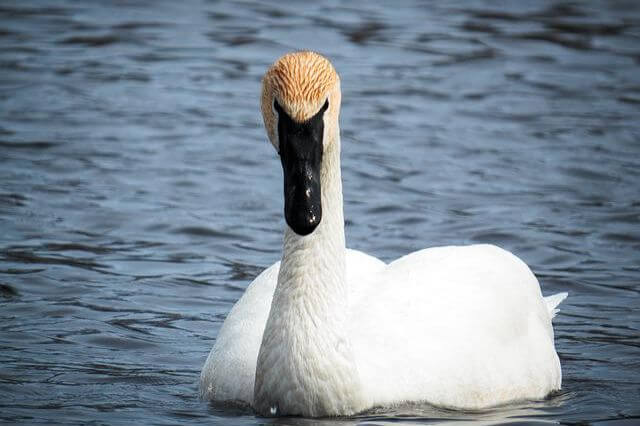 Coloration and identification: The trumpeter swan is a picturesque bird and one of the world’s largest waterfowls (aquatic birds). It is a white bird with a black beak that can be distinguished from its identical cousins, the tundra swan, and the snow goose, with two features.

Distribution and habitat: Trumpeter swans are native to the North American continent. Being migratory birds, trumpeter swans breed in Alaska, Canada, and the northern United States while migrating south and Eastern Canada for the winter.

As a characteristic of swans, trumpeter swans float in lakes, tranquil ponds, wetlands, sluggish rivers as well as marshes.

Nesting: Nests are built on the ground level from aquatic vegetation. They place their nest on small islands in wetlands or man-made platforms not too far from the shore (usually no more than 600 feet away). 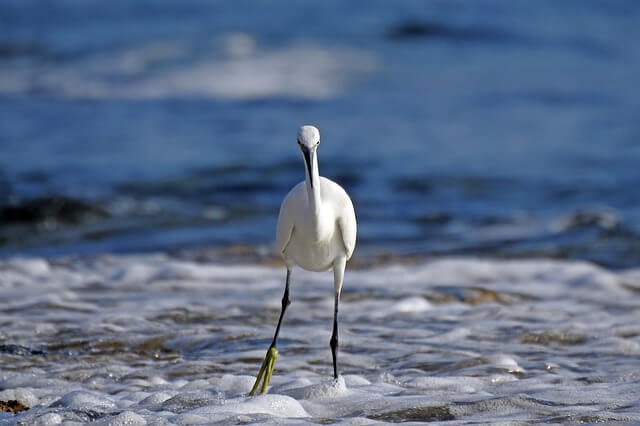 Coloration and identification: Little egrets are (despite their name) big white birds with black beaks. They have long necks and skinny long black legs. Their feet are a pale shade of yellow. Around their eyes and the base of their beak is yellowish-green bare skin.

Distribution and habitat: Little egrets occur on all continents except North and South America, where they appear as vagrants. Populations in Africa, the Far East, the Indian subcontinent, Southeast Asia (except the Philippines), and Australia are all-year-round residents.

In contrast, populations in the Middle East, Northern Africa, and Southern Europe are just winter visitors. As semi-aquatic animals, they reside in lagoons, shores of lakes, ponds, flooded lands, marshes, and canals.

Nesting: Little egret nests are just a puddle of sticks stacked together on trees, in reeds, bamboo forests, and rarely rock ledges. Like all egret species, little egrets nest in colonies.

Coloration and identification: Male adult black-tipped cotingas have all-white plumage with a black beak. Their wings are lined with black, and young males have both the wings and central tails lined with black. On the other hand, females have a brownish-grey and brownish-black plumage.

Nesting: These black-billed white birds use woody tendrils to create their nests. More often than not, their platform-type nests are placed above 60 feet from the ground.

Diet: Black-tipped cotingas are primarily frugivores, feeding on berries, palms, and other fruits. However, open country populations include insects in their diet.

You May Also Like: Small Black and White Bird Species 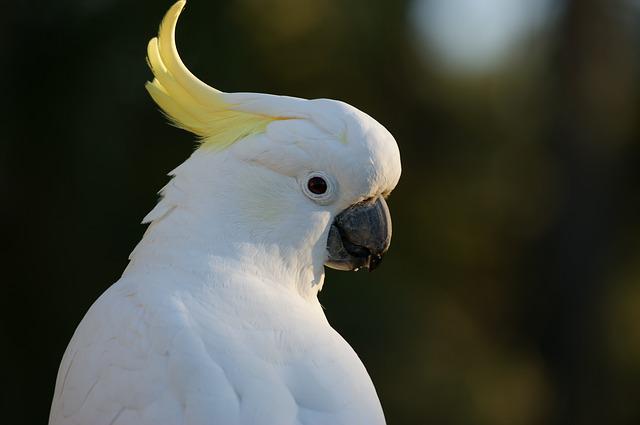 Coloration and identification: White cockatoos are among a few species of parrots without colorful plumage. However, white cockatoos have a remarkable all-white plumage with a tint of yellow under their tails.

These parrots have a mass of feathers on their head that fans out like an under-turned umbrella when startled and slips back when normal. Males and females can only be told apart from the color of their irises. Males have dark brown irises while females have red irises.

Distribution and habitat: White cockatoos are native to the islands of Indonesia alone. On these islands, they reside in swamps, mangroves, and woodlands, along clearings or water courses.

Nesting: White cuckoos choose the biggest and tallest trees with a hollow to build their nest. Nests are usually built 16 – 100 feet above the ground.

Diet: These parrots eat nuts, seeds, fruits, roots, and berries. Occasionally, they add insects and larvae to their diet, especially during breeding season. 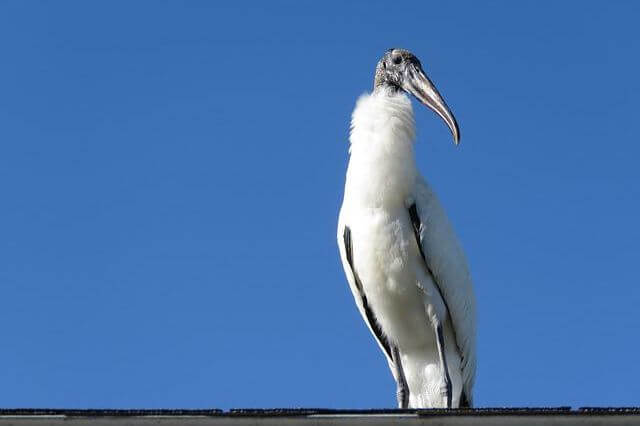 Coloration and identification: For many, wood storks are not such good-looking birds. They have an all-white plumage with black flight feathers and skinny black legs.

Apart from the attractive white plumage, wood storks have no vivid appearance. Their beaks are long, slender, and curved, and their head and neck are bare like that of vultures.

Distribution and habitat: Wood storks are found in coastal areas of Mexico and the United States, Central America, parts of the Caribbean, and almost all over the South American continent. They inhabit swamps, flooded and dry grasslands, ponds, and marshes.

Nesting: Wood storks build their nests in trees with surrounding water from 1-3 feet deep. They place their nest 3 – 50 feet high in forks of trees or on a branch.

Usually, they love company, which is why they live in colonies and have their nest next to a handful of other wooded storks on the same tree. However, in the breeding season, they nest solo.

Diet: Wood storks are carnivores. The bulk of their diet consists of fish, but they also eat crayfish, frogs, miniature alligators, and mice. 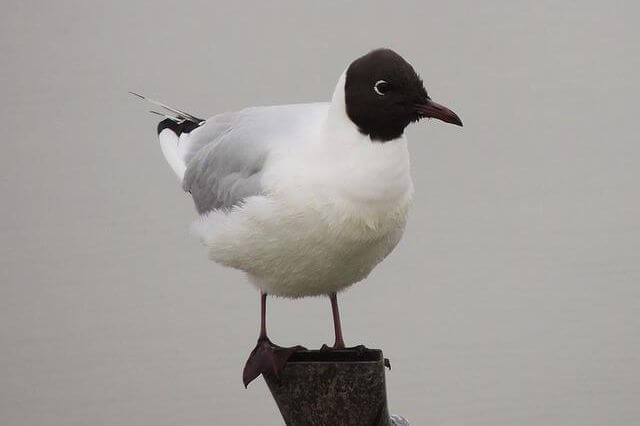 Coloration and identification: Both sexes of Bonaparte’s gulls have the same plumage color. During the breeding season, their plumage is white with gray flight feathers lined with black at the rim, a black beak, and a face mask.

However, in non-breeding birds, the black face mask is absent and replaced with a gray dot on the cheek, and their plumage has a more gray color.

Distribution and habitat: Bonaparte’s gulls are migratory birds native to the North American continent, the Caribbean, and as vagrants in Western Europe. They breed in southern Alaska and interior Canada and migrate further south along the United States’ coastal areas, Mexico, and northeastern Mexico.

Diet: Bonaparte’s gulls are opportunistic feeders. They eat small fish, tiny crustaceans, marine worms, and fly larvae. If the opportunity presents itself, they steal food from other birds.

Coloration and identification: White terns are beautiful all-white birds with black beaks. Their eyes are beady black, and their black beaks have a tint of blue. They have slender bodies and look the same as doves. Juveniles look slightly different from adults, with a brown tinge on their plumage.

These tern species inhabit trees in areas close to the ocean waters of these continents and the rocky regions by shore or inland.

Nesting: White terns do not build nests as most birds do. Instead, they simply lay their due eggs on a tree branch, rocky ledges, or in a mid-rib of palm fronds, usually 40+ feet high.

This concludes our blog post on black-beaked white birds.

Hopefully, the next time you see some of these stunning birds, you’ll be able to identify them with ease.

Thank you for reading. If you liked this article, here’s another hot bird post: White Birds of Texas.