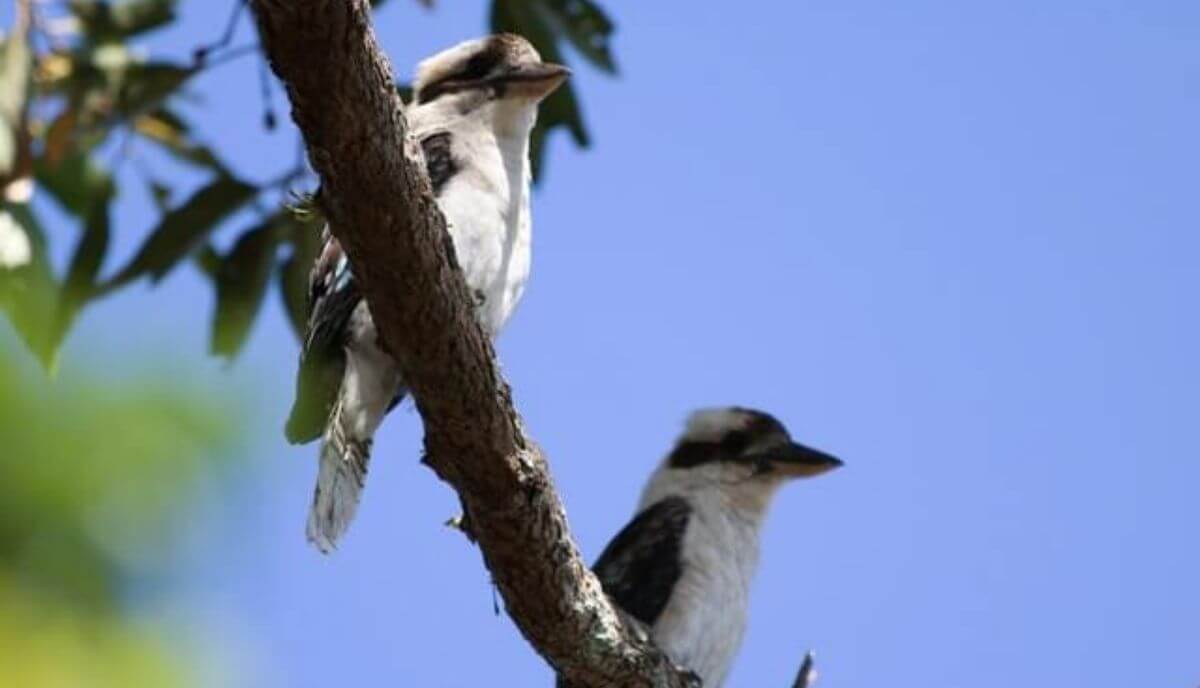 Birds come in all colors and sizes. However, some of the most common that you will spot around are small black and white birds.

These birds are found everywhere, so it is easy to see one around your home or when you go bird watching.

Since small black and white birds are so many, this article compiles some of the most popular ones. 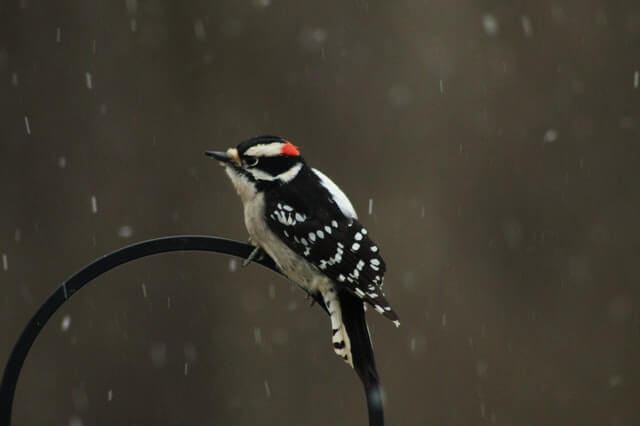 Downy woodpeckers are one of the smallest woodpeckers in the world, measuring between 6 and 7 inches. They are found in North America, specifically the eastern part of the USA and Canada.

They are black and white on the upper parts of their bodies and have a red spot on their heads.

You can usually find the downy woodpecker in forests and suburban areas. They prefer to make their nests in trees or, in some cases, inside the walls of buildings. 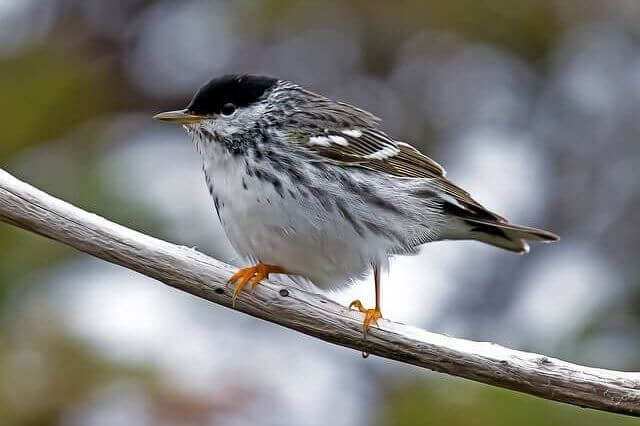 The blackpoll warbler is a quite tiny, black and white bird, weighing no more than a ballpoint pen. It breeds in Canada, yet it can be seen in the Eastern US during spring migration.

Interestingly, since they spend most of their time in higher evaluated mountains and brushy areas, these beautiful birds are more often heard than seen. The songs of blackpoll warblers are high-pitched repetitions of tsi notes.

These songbirds are characterized by thin bills, short tails, and a prominent black cap. In comparison to other warblers, they have a larger wingspan.

The bulk of blackpoll warblers’ diet consists of insects and spiders. However, they will also feed on different fruits and seeds. 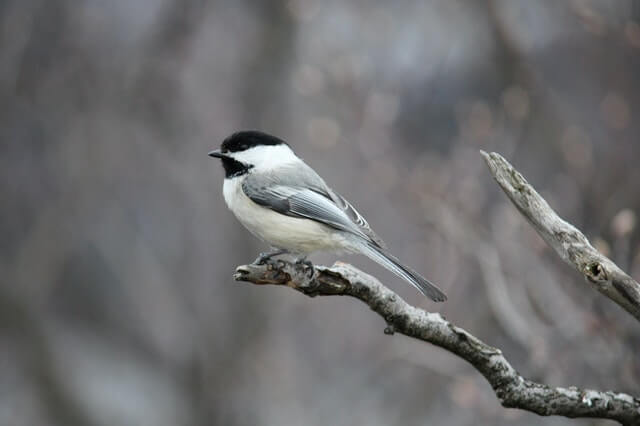 The black-capped chickadee is another small bird that measures between 4 and 6 inches. This non-migratory bird has a black bib with a dark cap and a bit of white on its cheeks, while its wings are black to light gray.

Mainly found in Eastern USA, the bird likes living in mixed forests, so it is not easy to spot it in residential areas. However, they can be attracted to your home with food and water, especially in the warmer months.

Black-capped chickadees primarily feed on fruits, berries, seeds, and insects. You can place these foods in feeders, and they may visit your home. 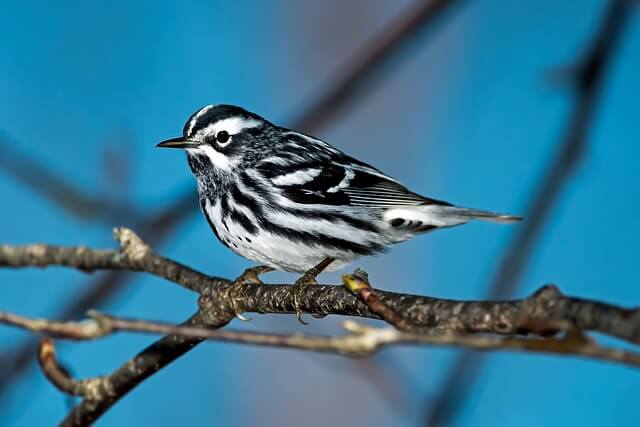 The black and white warbler is a quite small black and white bird measuring between 4.3 to 5.1 inches and weighing no more than 0.53 oz. It is known for its sharp singing voice that can be heard from afar.

Black and white warbler birds are found in North and South America and have different physical looks depending on the stage of life. During fall, it adopts a yellow-green color.

It is a migrating bird that travels a longer distance than any other songbird. It can go up to 1,800 miles over the Atlantic to the wintering areas. (source)

While their population is still stable, the total number has reduced by over 80% in the last 40 years.

Black and white warblers mostly live in forests and feed on insects and arachnids like spiders to get enough fats that help them in their long journey. 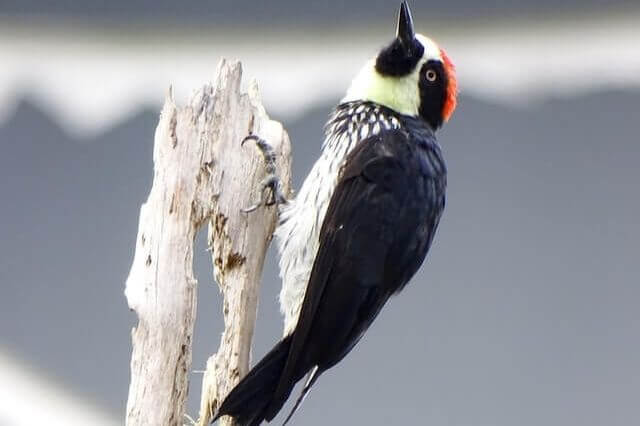 This small black and white-colored bird doesn’t migrate. Still, it lives in most parts of America, especially southern Canada and the Gulf Coast.

Acorn woodpeckers can be found in New Mexico, Texas, and Arizona throughout the year. It measures around 8 inches on average and it weighs about 3 oz.

Its body is black, with a white face, a long black bill, and a red cap.

The acorn woodpecker doesn’t like tall trees, so it can often be spotted on the ground or on short trees where it can easily spot food.

The bulk of their diet consists of small insects such as ants, larvae, nuts, and in some cases, berries. They use their long bills to peck through trees in order to reach insects and larvae. 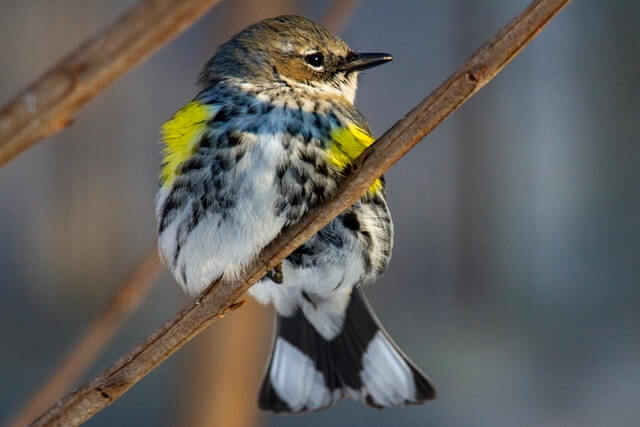 These birds are pretty similar to the black and white warbler, apart from the fact that they have greyish-black bodies. Yellow-rumped warblers also have a little yellow spot on their backs and a crown patch which is more visible when they take off.

The bird is mostly found in North America, where they breed both in the US and Canada.

This warbler can be encountered in wet forests or generally in places with many conifers. They like moving from one place to another.

Yellow-rumped warblers have various calls with different purposes, ranging from soft whistles to grunts and chirps. The bird is most vocal in the morning when they exchange songs. 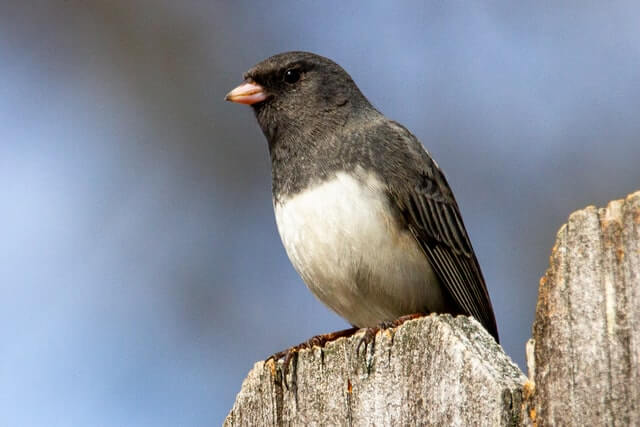 Dark-eyed juncos are categorized as sparrows and are displaying different colors depending on the different areas they live. Their color ranges from slate to black, white, and brown, especially in the west.

It is primarily found in woody areas in North America. The bird can be seen year-round in the Appalachian Mountains.

The breeding ones, usually in Canada and Alaska, migrate to some US states in the winter.

While they prefer the forests, you can attract them to your home using feeders with sunflower seeds, cracked corn, groundnuts, and millet. Also, have some water for them during the warmer months.

However, it is best to have the feeders on the ground rather than your porch since they are wary of people. 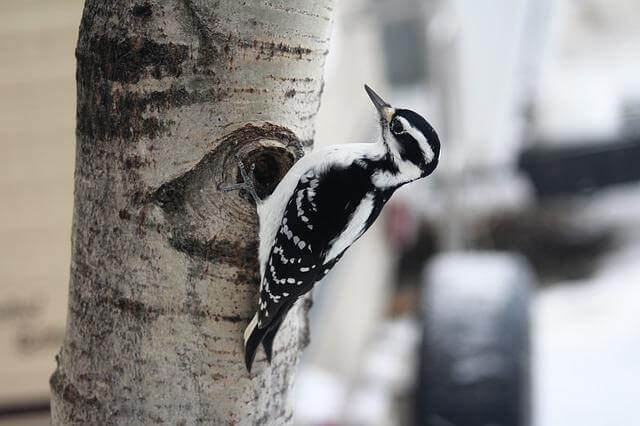 The hairy woodpecker is a small to medium-sized black and white bird measuring about 9 inches and weighing between 1.5 and 3.5 oz.

It is easy to confuse it with the downy woodpecker, but this bird is slightly larger. Hairy woodpeckers’ bodies have a white and black pattern with a sizable patch of white on the back.

You can distinguish males from females since males have a red spot behind their heads.

A hairy woodpecker’s call can be described as whiny and explosive, mostly heard in the morning. These birds can be seen in the woodlands or in secluded residential areas.

Hairy woodpeckers mainly feed on insects such as ants, beetles, spiders, and insect larvae. Their nests are usually in tree cavities, and they will lay around five eggs. 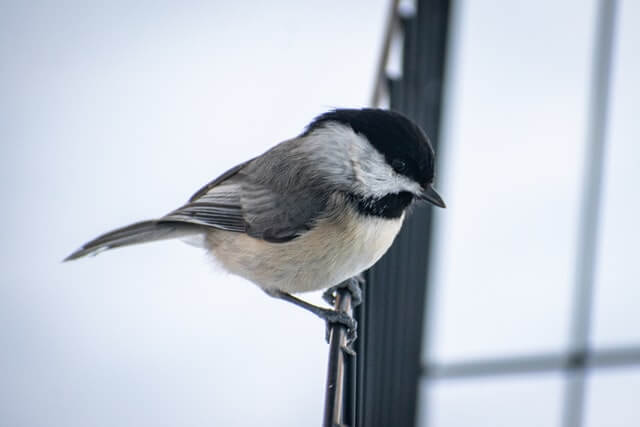 It is a small bird primarily found in thick woods, parks, and backyards in Eastern North America. Their head is quite large compared to the rest of their body, and they have a black cap with a bib and a bit of white on their face.

The  is a fluffy bird with black areas around the neck and a black-tipped tail.

They breed between April and July and make their nests in the cavities of rotting trees. Carolina chickadees migrate during winter when they mainly focus on the coasts where it is warmer.

They usually feed on insects, berries, and seeds during wintertime—however, they eat fattening foods such as larvae, caterpillars, and beetles in the warmer months. 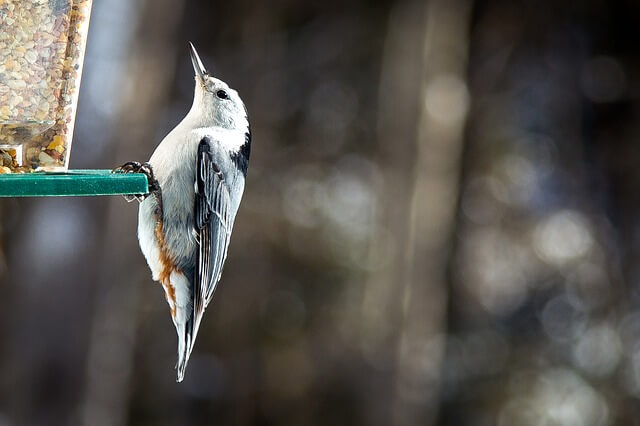 The white-breasted nuthatch is another small to medium-sized bird that measures about 6.1 in length and 0.72 oz in weight.

These lovely-looking birds have a long and pointed bill, black-gray plumage on their backs, white belly, and a black cap.

White-breasted nuthatches only migrate in the winter to parts of Mexico and Canada. They can be found in shrubs and coniferous forests and, in low numbers, in grasslands.

They forage on tree trunks, and sometimes they look for food on the ground. Their diet is based on insects and seeds, especially in the winter. However, if you want to create a feeder, they could also eat some peanuts and worms.

The white-breasted nuthatch lays up to 10 eggs that have an incubation period between 12 and 14 days. 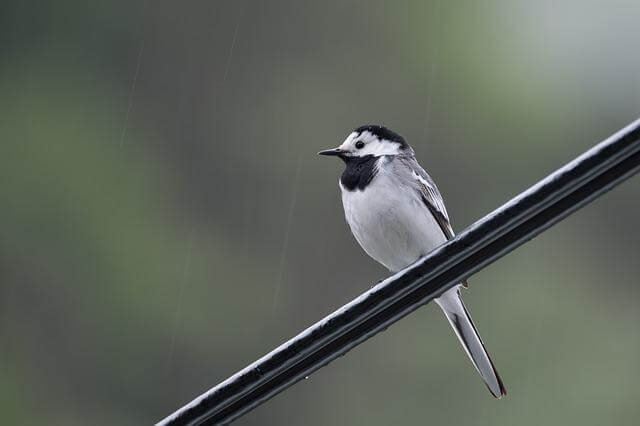 The white wagtail is a small but slender bird. Its plumage comes in different combinations of gray, black, and white.

There are many subspecies of white wagtails (between 9 and 11), and their colors depend on the part of the world they live in. White wagtails can be found in Europe, Asia, northern parts of Africa, and the western parts of Alaska.

Their diet varies by location, but these insectivores bird feeds mostly on terrestrial and aquatic insects. Small fish can also find themselves on the wagtail’s menu from time to time.

Their most notable characteristic is its almost constant tail wagging. This trait gave them its common name.

Interestingly, white wagtails are featured on stamps of several countries and it’s the national bird of Latvia. 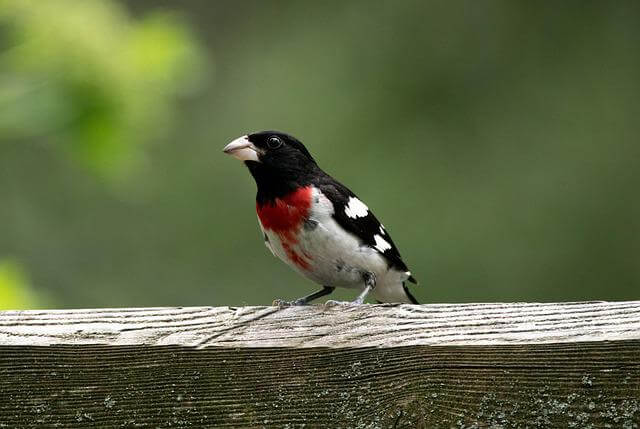 Rose-breasted grosbeaks are members of the cardinal family (cardinalidae). Their name comes from the colors displayed by the males.

Male rose-breasted grosbeaks have blackheads, tails, wings, and back, while their stomach and chest are white with a bright rose-colored patch. Due to this rose patch, they are colloquially called “cut-throat”.

Females are dark gray and brown on the upper parts of the body, while the chest and stomach are white with a buff tinge.

They are found in open woods across most of Canada and in the northeastern part of the United States. 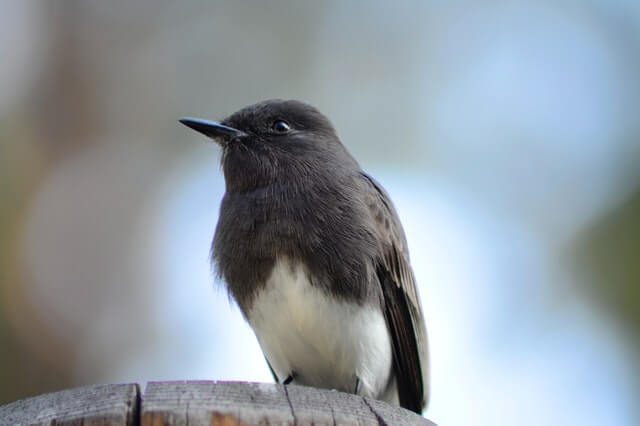 The black phoebe is the last member on our list of small black and white birds.

They breed from southwest Oregon and California, all the way to South America. You can usually find them perched low over the water, hunting their favorite food – insects.

Besides having white bellies, this tiny bird is predominantly black, with their dark feathers, beaks, and feet. Both males and females have identical plumage, and their coloration does not vary throughout the season.

The black phoebe lives in deciduous forests but occasionally moves into mixed forest areas. These unique birds produce “tsip” calls when feeding, during flights, and when protecting their nests.

The diet of black phoebes is mainly based on flying insects, such as wasps, bees, beetles, flies, and others.