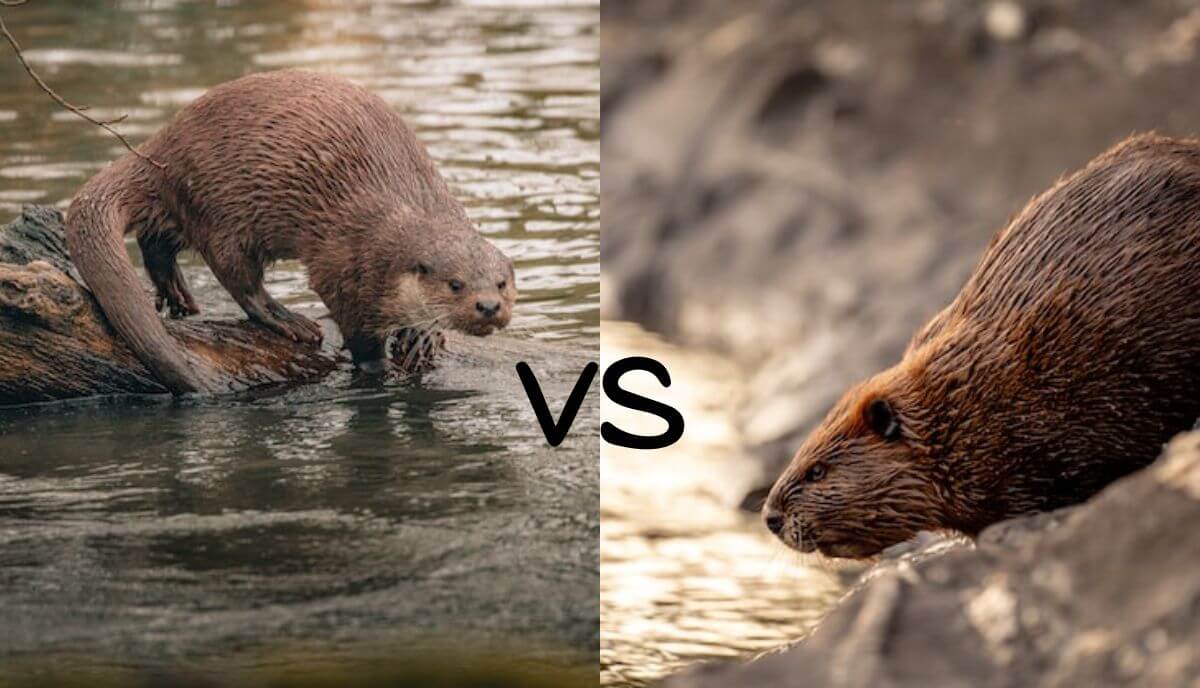 Due to their apparent similarities, otters and beavers are animals that are sometimes mistaken for one another.

Not only are they alike, but they also have some similar behaviors, like they live near water and are both skilled swimmers.

While there are similarities between the two, otters and beavers also have many differences, including their physical composition and way of life.

Once you become aware of these differences, you can quickly tell beavers and otters apart.

If you’re one of those who find it challenging to distinguish the two, make sure to read this post, and you won’t have trouble telling the difference anymore. 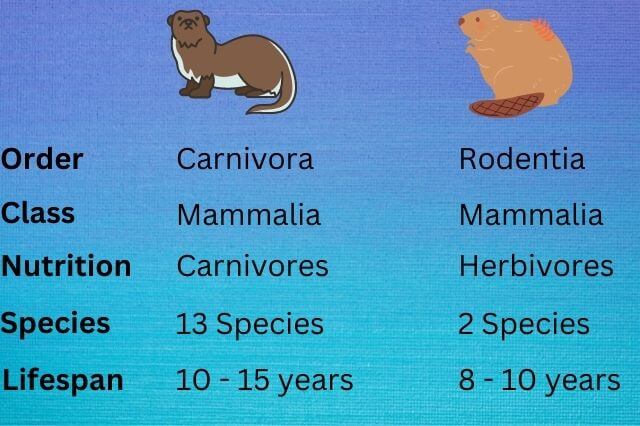 A beaver is a member of the Rodentia order, together with hamsters, muskrats, chipmunks, and squirrels, among others. It resembles a massive rat because of the long, thick fur covering every inch of its body.

Beavers have webbed hind legs allowing them to swim up to 5 mph (8 km/h). While on land, beavers appear awkward and are rather slow, making them vulnerable to predators.

Beavers use their claws to dig and break bark off trees to build dams – for which they are famously known.

Growing up to 3 feet and weighing up to 70 pounds, beavers are the second largest rodents in the world, right after capybaras.

In addition, they have big heads, long incisors (that grow for life), flat scaly tails, and bulky bodies covered in brown or gray fur.

An otter is a member of the Mustelidae family. There are 13 known species of otters, some being partly aquatic, others aquatic, and some marine.

Otters have long, thin, athletic bodies and are relatively small compared to beavers. They have a very streamlined shape, powerful tails, and webbed feet, contributing to their fast pace in the water.

However, otters can move on land very fast too. While beavers are slow when they aren’t in the water, otters can reach top speeds of 29 mph.

Also, otters have a very high metabolic rate. Depending on the temperature, otters need to eat between 15 and 25% of their total body weight daily to obtain enough energy.

In addition, otters are skilled hunters and are one of the few animals on the planet known for using tools.

Related: Why Are Otters Evil?

Otters are carnivorous, while beavers are strictly vegetarian and do not eat any form of meat.

Spending most of their time in the water, otters primarily hunt fish and other aquatic animals, such as crabs and crayfish. They may also eat small birds available in their environment.

On the other hand, beavers are herbivores feeding on leaves, twigs, fruits, and barks. They supplement their diet with aquatic plants.

Beavers also enjoy eating the foliage of trees such as willow and red maple trees. In the winter, when vegetation is scarce, their diet mainly comprises tree barks which they break using their big claws.

It is easy to confuse these two animals when looking at them from afar. However, up close, they have striking differences that make it easier to differentiate between them.

An otter can be described as a cute creature that looks similar to a seal. It has smooth fur elegant body, a tiny head, and small ears.

The beaver’s face is more structured, making it look like a giant rat. It has a large head, hair covering its cheeks, and two incisors that extend from its mouth.

While both animals are good swimmers and have webbed feet, their tails also differ in shape. Beavers have flat tails, while otters have long muscular tails that are more like a paddle.

In addition to physical differences, beavers are heavier than otters. On average, beavers weigh 60 pounds, while otters typically weigh no more than 25 pounds.

Otters are skilled predators and spend up to 12 hours a day hunting their favorite food. Their whiskers are quite sensitive to changes in the current which further aids when catching prey.

They are also playful and often chase each other in the water.

Beavers, on the other hand, are prey, not predators. These natural architects are hunted by various animals, predominately coyotes, foxes, bears, and birds of prey.

Otters are polygamous animals that mature sexually at around two to three years of age. Their mating season changes depending on the species and where they live.

While their mating season is usually once a year, they can mate more times if food and shelter are enough. Usually, males and females live in separate circles. When it is mating season, males approach females.

Beavers are quite different, and they practice monogamy. They mate with the same partner throughout their life and will only get another one when they die.

Mating season usually starts in January and until February. The gestation period of beavers is 120 days, while that of otters is about 60 days.

Otters are born in a den in the water and are usually blind for the first year of life. Once they get their sight, the mother takes them out to the water to teach them how to swim and hunt.

The mother remains the main caregiver and nurses the young for up to 12 months. If the pups die and the female is left without offspring, it usually hurries to get pregnant again.

Beaver offspring, called kits, are born fully functional, and within their first two weeks, they are already used to the water and swimming.

Weaning starts at two weeks, but despite their independence at a young age, they usually live with their parents for two years.

Similarities Between Otters and Beavers

Even though they differ significantly from one another, beavers and otters have a few similarities.

Also, both creatures are excellent swimmers who adapted to the aquatic lifestyle in a way that their nostrils and ears close up underwater.

Another similarity between the two species is the webbing between the feet. Since they depend on water, they evolved physical adaptations that aid their swimming abilities.

Both animals are primarily nocturnal. Meaning they sleep during the day and are mostly active at night.

Freshwater otters and beavers may interact with one another but are not usually friends or foes. They stay out of the other’s path since they have different behaviors, but they hardly ever fight.

For example, otters and beavers don’t eat the same things, so they don’t usually conflict.

FAQs on Beavers and Otters

In this section, I’ll quickly answer some of the most common questions regarding beavers and otters.

Are Otters and Beavers Related?

Other than the fact that they are both mammals, otters and beavers are not related. Otters are part of the Mustelidae family, while beavers come from the Castoridae family.

They live in a similar environment and have a similar way of life, but that’s about it.

While otters mostly swim with their bodies and tails to navigate, beavers mostly use their legs to swim. So, even in water, it is easy to distinguish them.

Do Beavers and Otters Get Along?

Beavers and otters can be friends, mostly because they don’t compete on anything, especially food. The way of life of beavers is not affected by otters, but otters have a lot to gain from beavers.

Since beavers build dams, it helps otters with habitat and plenty of food. The dams trap fish, making it easy for otters to get their meal and eat.

A friendship between otters and beavers is quite rare since they won’t hang out together. However, they can coexist in the same habitat in harmony.

There have been instances where otters have killed and consumed beavers, but this is uncommon. According to studies, there was 0.4 percent of these occurrences, with March and April being prime months for otter beaver predation.

In summary, while they may appear like similar animals, otters and beavers are actually quite different.

Beavers are much larger, live in freshwater, build dams, and are vegetarians. On the other hand, otters are smaller, more agile, build dens, and eat a lot of fish.

However, both animals are pretty interesting, and hopefully, this article has helped you learn a few fundamental differences between the two species.

Thank you for reading. If you enjoyed reading this post, here’s another popular read: Lions vs Shark – who would win?