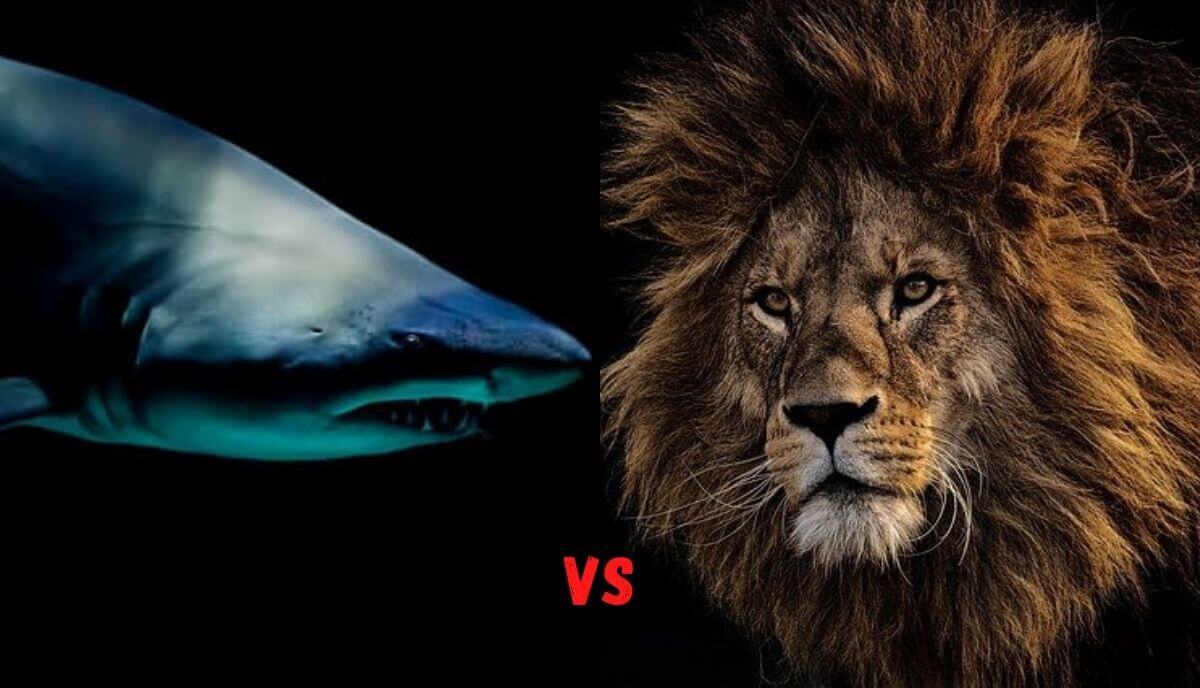 Both lions and sharks are fearsome creatures, so it is no surprise that people wonder which one would win in a battle.

While some may argue that the lion would be the more likely victor, others could make an argument for the shark. It really just depends on your perspective!

If the battle occurs in the water, the big fish will be the ultimate victor in a fight between shark and lion. In general, sharks have an advantage in water territories and brute force. However, in case the battle somehow happens on land, the lion would most likely come out as the winner, as sharks can’t utilize their full potential outside the water.

If you want to know more about the strengths of these two predators, which one is more dangerous, and what would be a decisive factor in a potential brawl – keep reading!

Shark vs. Lion: Who is More Dangerous?

Starting with a good question, I see that it is something that bothers many people. Especially if they have decided to take a walk through the savannah or swim across the ocean, it is essential to answer your question and say which animal is more dangerous to US – humans.

Lions are much more dangerous to humans than sharks are. On average, lions kill more than 100 people per year, putting them in the spot of the top ten deadliest animals on the planet. On the other hand, sharks are responsible for about ten fatalities.

Furthermore, most shark attacks are not lethal. In fact, many people who a shark has attacked end up with ‘only’ injuries.

When a shark launches an attack, it is typically to scare off the potential threat, while there is no backing off in the case of lions. They do not stop until they put away their enemy. 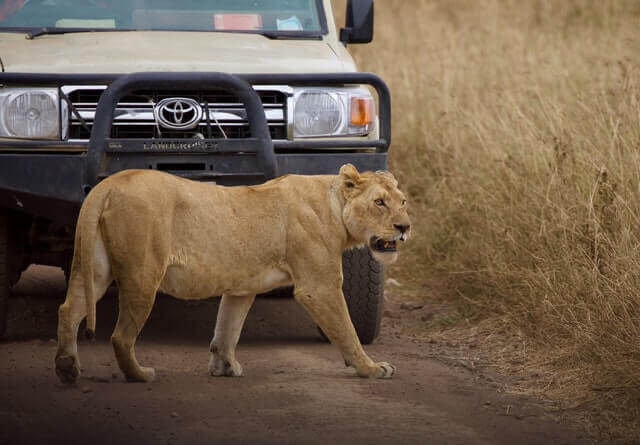 When it comes to lions are territorial animals living in a specific area that they protect from other creatures.

It means that they would not love to have random humans passing by. Especially near them, like way too close to them like in a zoo.

Such irrational behavior like getting too close to big cats may lead to someone’s inevitable end – DEATH.

Lions do not see people as a primary food source, so raiding a village with their brethren is not a common occurrence. However, lions are extremely dangerous to humans and will still endanger your life if you get into their territory.

In fact, in the records, you can see that many more people fall prey to these cats. Because of similar behavior, people get too close and end up badly.

But, of course, that is not in every situation.

Sometimes the big cats whose habitats get taken over by people get too close to the villages or places inhabited by humans. They hunt animals and sometimes may endanger the people living there. 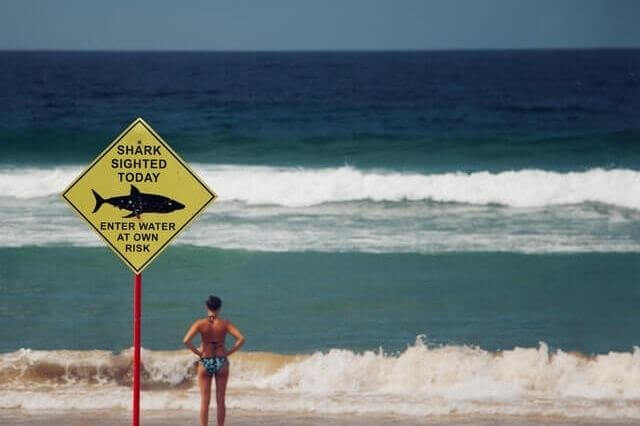 Now it is time to pay attention to the big fish – our shark contender.

There are many subspecies, and each of them has its behavior. Because of that, we will speak in general and not be paying attention to a specific subspecies of sharks.

The ocean kings are one of the animals that have this kind of bad image due to Hollywood movies.

However, the sharks rarely attack humans on purpose or prey on them. Instead, the animals rather avoid them, as people are not in their diet plan.

Although the sharks do not prey on humans, it is not impossible to get eaten by one.

Sharks are ocean carnivores, and if f they see a hurt human – especially whose blood is alluring to them in the open sea there is a big chance that the hurt person will become a victim of the big fish – be it great white or bull shark.

In the end, even if that is true, sharks are less likely to attack people.

That makes them less dangerous for us, which means a person is more likely to die from a lion attack.

Bite force – our favorite part. Here we will show you who can bite you harder – hopefully, you don’t get to experience it.

If we look at the lion, you can expect a bite force of up to 650 PSI maximum 700. As you may know, this is not the strongest in the animal kingdom, but still a great power. So if you get bitten, you will definitely feel it (or stop feeling anything)

Not taking a look at the sharks, we have decided to use the great white as a reference. It has the most potent bite force among the shark species, and its jaws can create up to 4,000 PSI of pressure that may crush anything in its way. If you doubt it, check how they munch on giant whales and understand how terrifying it is.

As you can see, when it comes to bite force, a shark’s jaws are far superior to a lion’s.

However, it is essential to note that the chance for these two animals to encounter is minuscule – unless a lion decides to jump on a beach vacation.

Plus, the animals have adapted to live in their respective habitats, meaning their build and weapons are different.

Behavior and Intelligence – Lion vs. Shark

Who is smarter? Well, a tricky question to ask. Let us say that both are intelligent to a point which you will get surprised.

Let us start with the sharks – they are brilliant animals, and it has been proven that they are prone to learn from each other.

Surprisingly, many have not expected this, but scientists found out that if a shark knows something new, soon all the ones living with it will adopt the new behavior or skills discovered.

Do you know what is more attractive? The big fishes can even solve their own problems.

Related: Can Sharks be Friendly?

Unlike many human beings, sharks can develop solutions to their issues.

Of course, they are not fundamental ones like “Which was first the egg or the hen?” but it is still impressive that they can think and find a solution to various problems in their lives.

Turn and gaze towards the big cats. It is their time to shine now!

It may sound surprising, but the lions are pretty intelligent animals, especially when it comes to the cat family. They outshine species like tigers and cheetahs.

Lions can cooperate, hunt together, and enjoy life in pride due to their intelligence. When you look at them, you may not expect it.

Still, lions have proven that they can also solve their problems quickly because they live in a social environment – communicating with other lions, etc.

It will be hard to deduce which animals are more intelligent because they both have similar qualities.

Now when it comes to problem-solving, they are almost equal. Both creatures are prone to learn from their species’ behavior and can make rational decisions interestingly.

When it comes to behavior, both can be aggressive and, at the same time, passive. They will either ignore you totally or will munch you for lunch.

The essence of their predator nature is that they either will see you like food, neutral, or another predator (threat). The best advice will be to not mess with any of them!

Lion vs. Shark: Attack and Defense

Time to start the brawl section. Who wins is an exciting yet subjective topic to talk about.

The first thing we have to talk about is who owns the high ground? Will they play on the lion’s home ground or in the ocean where the sharks dwell?

Let us be realists; a lion will be dead before it can even make a move in the ocean. The same goes for the land, and a shark will be helpless and die pretty quickly.

To make the contest fairer, we will compare a fight between a lion and a shark in the shallow water.

Let us say they engage there and have a suitable match. Who will win is something to be decided by how they engage.

In the shallow waters, neither of them can rely on their speed. Both will have to use other means to fight.

The shark will be able to utilize its tail and jaw. While the lion claws and bites while trying to avoid the ocean predator.

Read Also: Tiger vs. Hippo: Who Would Win?

Round 1: Let the Fight Begin

Let us say that the lion takes the initiative, realizing it is smaller and trying to surround the shark.

The big fish will have a more challenging time moving or turning around in the shallow waters, and thus the lion will be able to go behind it.

Using its trials as a defense means the shark will keep the lion on the side. The primary weapon of the big fish – the jaws will be after the lion nonstop.

The first round will be hide and seek like a battle where the lion will surround and attack the shark while it defends and tries to catch the guard’s big cat with its jaw.

As you can expect, the fight would not be the most entertaining one given the disadvantages that both animals experience.

Therefore, it will be mainly decided once one of the contestants takes a slight advantage over the other.

In the lion’s case, it will be if he manages to jump on the back of the shark, stay on it using its claws, and keep biting till it kills it – low chance. On the other hand, the shark will end things as long as it can bite the lion.

If the shark catches the lion – it will end the big cat’s life, as the jaws are strong enough to crush its body in milliseconds.

While on the other hand, a lion will have to dry the shark’s energy out in order to win. While constantly scratching and biting its thick layer of skin.

Lion vs. Shark – Who Would Win the Battle?

In summary, it is hard to say who would win in a fight between a lion and a shark, but we vouch for the giant shark; again, it depends on many variables, such as the shark species – as it can change the possible outcome, as well as the battleground.

As we said, a giant white shark can quickly end the lion’s life with one bite. But, on the other hand, a smaller shark can easily swim even in shallow water and still be able to win.

A lion will win only if it fights a giant shark, which will have a hard time moving in the shallow waters, and only if the cat manages to tire it out. Another scenario in which a lion would come out on top is if the fight took place on the shore, and in that case, no shark species would be able to utilize its strengths fully.

And that’s about it. With this, we have concluded the “lion vs. shark” article. Thank you for reading!

If you like this type of article, we recommend another similar read: Lion vs. Bull: Who Would Win?