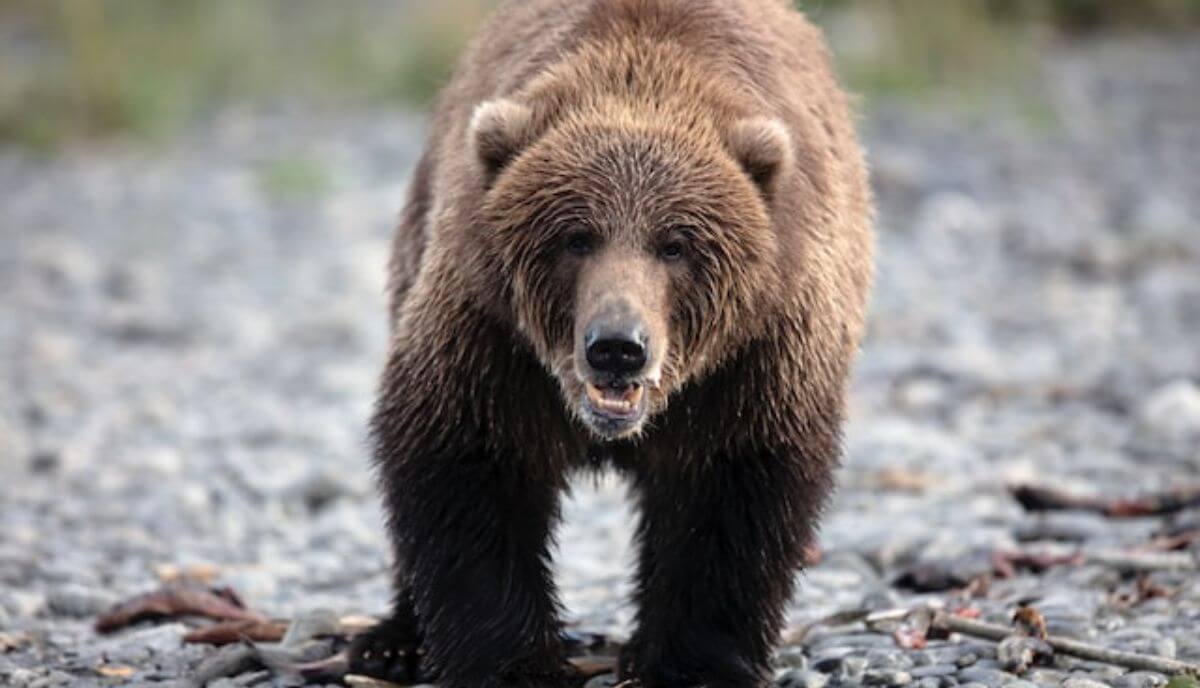 You’d surely get the chills if you saw a Kodiak bear. Weighing up to 1,500 pounds, they’re one of the biggest land predators.

But are Kodiak bears dangerous?

They may not be as deadly as you may think. Of course, as with any other predator, Kodiak bears can be dangerous if they feel threatened or when protecting their cubs. However, Kodiaks don’t usually hunt mammals (including humans), as they primarily feed on plants and fruits rather than meat.

Keep reading to find out when a Kodiak bear may get dangerous and how to react.

No, Kodiak bears aren’t typically aggressive, as they usually try to avoid humans and fish in areas far away from people. But, if someone gets too close to them and frightens them, they may choose violence.

Here are two different examples of encounters with Kodiak bears:

One hunter almost lost his life in 2006. First, a cub and then two more bears attacked him. This cub weighed more than 250 pounds! Luckily, the hunter was able to survive and says that he did nothing to trigger the attack. But, he had a doe that he previously shot, so this could have been a possible reason for the attack.

Usually, Kodiak bears would pay little attention to you.

So not every story has a fatal ending.

Don’t approach them, don’t try to feed them, and you’ll live to tell the tale.

A large Kodiak male can be over 10 feet tall and weigh up to 1,500 pounds, whereas females are about 25% smaller. They are one of the largest land predators, so you’d expect they’re equally aggressive, but this isn’t the case.

Kodiak bears aren’t voracious carnivores. They’re omnivores, with most of their nutrition coming from plant-based food!

This means they eat a variety of foods, including plants, berries, and even grass.

Grizzlies are by far more dangerous than Kodiak bears.

So what are the differences?

Grizzly bears are more aggressive than Kodiak bears. In fact, they’re one of the most aggressive (and dangerous) bear species. Unlike their relatives, Grizzlies hunt large mammals: elk, moose, deer, and bison.

Also, grizzlies are responsible for 40 attacks on humans, of which 10% ends in fatal scenarios. On the other hand, only one death by Kodiak bear attack has occurred in the last 75 years.

Related: How Dangerous Are Grizzly Bears?

What To Do When Encountering a Kodiak Bear?

To be safe and prevent a Kodiak bear attack, you should avoid the animal’s habitat. However, if you find yourself near a Kodiak, here are the key factors that will help you stay uninjured.

When visiting the Kodiak archipelago, keep your distance and stay alert.

This may seem obvious, but don’t feed the bears, no matter how friendly and calm they look.

A good idea would be to bring your bear spray with you.

You may have heard that you should play dead when encountering a bear in the wild. Slow and steady go a long way with Kodiak bears, but it’d be wise to get away from them and not lay down and wait for them to get to you.

In Summary – Are Kodiak Bears Dangerous?

All in all, the result of a possible encounter with a Kodiak bear depends on you. How prepared you are, how calm you are, how much food you carry, etc.

Kodiak bears only act aggressively to protect themselves or to get the food you’ve got. If this happens, stay calm. Wouldn’t you get scared if someone started yelling out of fear and running hysterically?

Don’t bother them, and they won’t bother you. It’s not in their nature to attack without a cause. Don’t give them one, and you’ll have a great story to tell your grandkids one day.

Thank you for reading. If you liked this article, here’s another popular topic about bears: Are Polar Bears Dangerous?