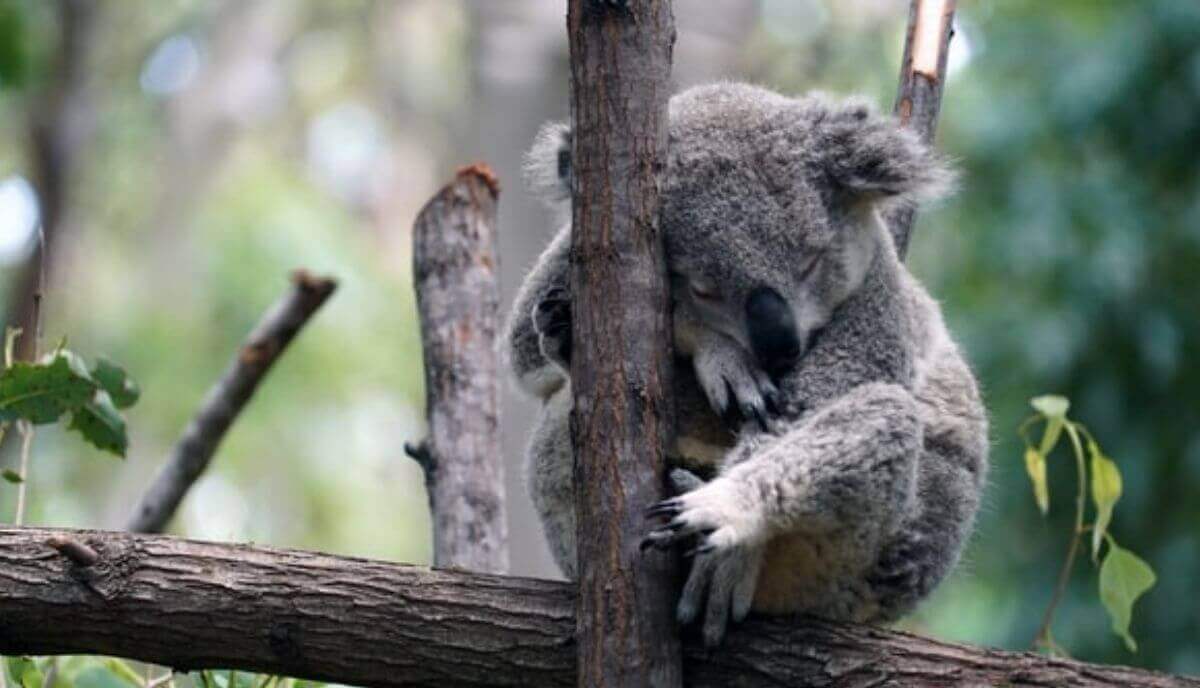 One of the most famous animals globally and Australia’s most known representative across the globe is a koala. When people see their cute faces, the first question that pops in the head of many is, are koalas friendly? And that’s an excellent question.

Koalas are not friendly to humans, even if they seem like they are. They are wild animals, and like many other wild animals, they don’t like any contact with people. Koalas are by nature solitary and shy animals, and they like to do their own thing without humans or other animals bothering them.

Despite their cute-looking appearance, koalas are not really friendly, and it’s a myth that they enjoy contact with humans. There are some cases of koalas that enjoy being petted and are okay with being touched by humans. But in those cases, koalas were raised by those same humans.

If a wildlife caretaker is raising an orphan koala, it’s expected that the animal will form some relationship with the person with whom it is spending the days. However, even a koala that’s been raised in an enclosure surrounded by wildlife caretakers isn’t friendly with unfamiliar people.

Even if they seem friendly, they are often triggered if humans come near them and become very nervous. They are not dangerous animals per se, but they are still wild animals, and if they feel threatened, they will attack you.

Are Koalas Friendly With Each Other?

Koalas are not friendly to each other, and they prefer to live a solitary lifestyle. Not often, but sometimes koalas can be very aggressive toward each other’s, and they can even fight.

Koalas live in social groups, and they don’t like to migrate. When they find their home, they like to stay there with their group. They are highly territorial, but they respect the territory of others.

The fact that they live in complex social groups is fascinating. Even though they are not friendly with each other, they will try to avoid conflict. And they will do it primarily because they are trying to save their energy.

In the social groups where koalas live, every group member knows its place and what it can do or not. Now you see, if koalas are not friendly with each other, why would they be friendly with humans.

Koalas don’t like humans in most cases, and it’s simple as that. It may sound a bit harsh, but the reality is that koalas don’t like humans. And if they could choose, they wouldn’t interact with us. Wild koalas are quite territorial, and they will more likely display aggressive rather than friendly behavior.

Did you ever assume that koalas are sluggish animals that like to hang around and eat eucalyptus leaves? Because most of the time, koalas are just like that. However, they are not lazy.

Wild koalas don’t like to be petted, they are not fans of cuddling, and they won’t like it if you come close to them. So, if you ever come across a koala, make sure not to get too close to the animal.

But even if you come close, the koala will runoff. Because although they lead a slow lifestyle, they can be pretty fast when they see an annoying human.

Can Koalas and Humans Be Friends?

Sometimes koalas and humans can be friends. But it can happen only in specific scenarios, and it’s not something that usually happens.

If a baby koala becomes an orphan and a wildlife caretaker starts taking care of it, a bond can be formed between the koala and the human. If the koala is raised by the caretaker and surrounded by people from its first days, it can get used to people.

And even in those cases, can we say that koalas and humans are friends? Not really. A koala is a wild animal with instincts, and it will always be a wild animal.

This means that the bond that’s been formed between a koala and a human is never going to be the same as the one the human can form with a dog.

Can You Touch a Koala?

Many videos on the internet show you koalas that like to be petted and koalas that seem to enjoy a casual afternoon cuddling session. In those videos, koalas are often touched by the people they are used to, so they are permitting them to pet them.

However, koalas can be highly irritated and upset by other people they don’t know.

If you try to touch a koala, it can get pretty angry and even try to chase you. They look like they are unbothered, but in reality, people are bothered a lot.

So, please don’t try to touch a koala if you encounter one.

Koalas are cute, and they are a definite symbol of Australia. They seem lazy, but they are sleeping for 18 hours a day because they don’t get enough energy from the diet they practice. So, even if they seem like a friendly animals, they aren’t. They may seem friendly due to their sleepy-like eyes and slow lifestyle, but in reality, they love to be left alone.

Unfortunately, koalas are losing their homes due to frequent deforestation and bushfires. Also, their numbers are falling due to the same reasons and diseases.

So, if you like koalas and you would love to do something good for them, restrain yourself from petting them and instead donate to help an organization that’s trying to save them.

There you have it. I hope this article has helped you solve the dilemma “are koalas friendly?”

If you liked this post, I would recommend a similar read – Are Lions Friendly?