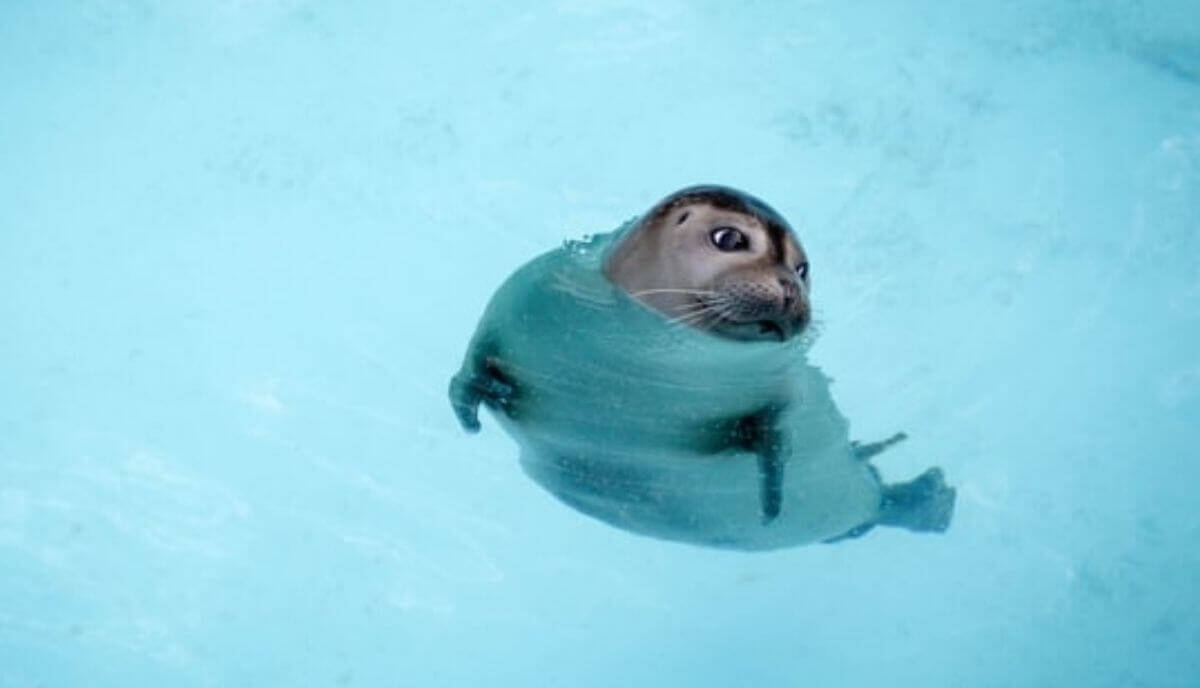 An image that comes to mind when thinking about seals, is that of a colony of seals lying on a beach or ice, sunbathing. Seals are easily identified by their long flabby bodies, short flippers, finned feet, and whiskered noses.

They are semi-aquatic mammals found in the cold seas around the world, and today, there are more than 30 seal species. Physical characteristics aside, many people wonder – are seals friendly?

Wild seals are not friendly towards humans, but they’ve got used to human presence as they are often fed, so they’ve become neutral. However, despite their friendly-looking appearance, seals can be dangerous to humans, and because of that, they should be treated with caution like every other wild animal.

Seals are usually peaceful and non-aggressive unless they feel threatened. Situations, where seals would feel endangered or display aggression, are when a mother is with her young, when two males are fighting over a female or for territory, or when a seal is approached directly by a human. However, if one allows a seal to ‘make the first move’, one will be met with a much gentler creature.

Seals are also naturally curious and will easily approach an object or a person simply to explore. In order to get close to a seal, one must be still and patient and allow the seal to approach them.

Once the seal is familiar enough, it will permit itself to be touched. A seal’s mood can change quickly though, so one must always exercise caution when interacting with this animal.

However, it is strongly recommended to stay at a safe distance and not try to interact with wild seals unless you are accompanied by an animal expert.

Seals are social animals as a species, and one can easily see this when the seal colonies come out of the water and spend some time on land. The huge colonies will have sub-cliques, where the smaller groups of seals will do most of their activities together.

Seals do not have a high history of aggression toward humans, and there are only a few records of seals attacking humans. They are intelligent animals and have been known to make social connections with human beings, particularly caretakers in zoos. This could perhaps be due to the type of care they receive from humans; they are fed regularly and are also treated for any injuries or illnesses.

In captivity, seals have to adapt to a different way of life that goes beyond regular feedings and health checkups. This includes interaction with the visitors that come regularly to these exhibits, in addition to the regular interaction with their caretakers.

As a result, seals in captivity have often demonstrated a higher degree of friendliness toward humans than their counterparts living in the wild.

Despite not having a history of aggression or violence toward humans, seals are still wild and dangerous animals. Out in the wild, humans must respect seals’ territory and are advised to keep their distance.

At least 100 feet (33 yards) away from a seal colony. This may be due to their moody nature. In water, another recommendation is not to make sudden movements in order not to trigger an attack from the seal.

Can You Have a Pet Seal?

Although these creatures are fascinating to observe, one cannot keep a seal as a pet. The environmental, dietary, and health needs of an individual seal cannot be met by a single person. Further, seals need to live in groups with other seals, and this creates an additional burden of responsibility for their care if each member of the group is to thrive.

Seals as a species are also protected by the Marine Mammal Protection Act. This act states that one cannot touch, pet, feed, or harass a seal. Harassment under this act means any kind of behavior that causes the seal’s behavior to change.

Proximity to a seal can cause behavioral change on the part of a seal, as it may attack. Even a distance of 2.5m (8 feet) away is considered very dangerous for a human.

Exhibits such as zoos, marine parks, and aquariums are the only ones licensed to keep seals. These exhibits are mandated to keep and care for seals ensuring their health and safety.

In these controlled environments, caretakers will interact readily with the seals. At these locations, one can observe seals at a closer range. However, this would be behind a glass wall or a fence.

Why Are Seals So Cute?

It is not easy to define why seals appear to be so cute. It could be that they have front-facing eyes, making them look like they have a ‘face’. Maybe it is because they have big round eyes that remind us of babies. Perhaps it is because they look so similar to dogs, which often elicit strong positive emotions in many people.

Either way, the adage goes, beauty lies in the eyes of the beholder. Whatever the case may be, there is actual science behind why we find some animals ‘cute’ that involves more than just what we see.

Cute also engages our other senses and when it comes to seals, hearing their clicking and trilling noises when they interact with us or seeing them respond to our touch creates a positive emotion. This inter-sensory interaction could be at the core of our perspective.

In conclusion, seals can be friendly among themselves, yes. Their social side emerges strongly during mating season in particular. Mating season is an annual event whereby males will mate with a singular female. In some species, the male seal possesses several females to form his harem and drives the other males away from his territory.

When it comes to humans, seals are usually not as friendly, but not aggressive either. However, you should always keep your distance from wild seals, as they can potentially become dangerous, like every other wild animal.

And that’s about it. I hope I have helped you understand seals a bit better, and also resolved the question of “are seals friendly?”

If you enjoyed this post, I would like to recommend you a similar article – Are Elephants Friendly?