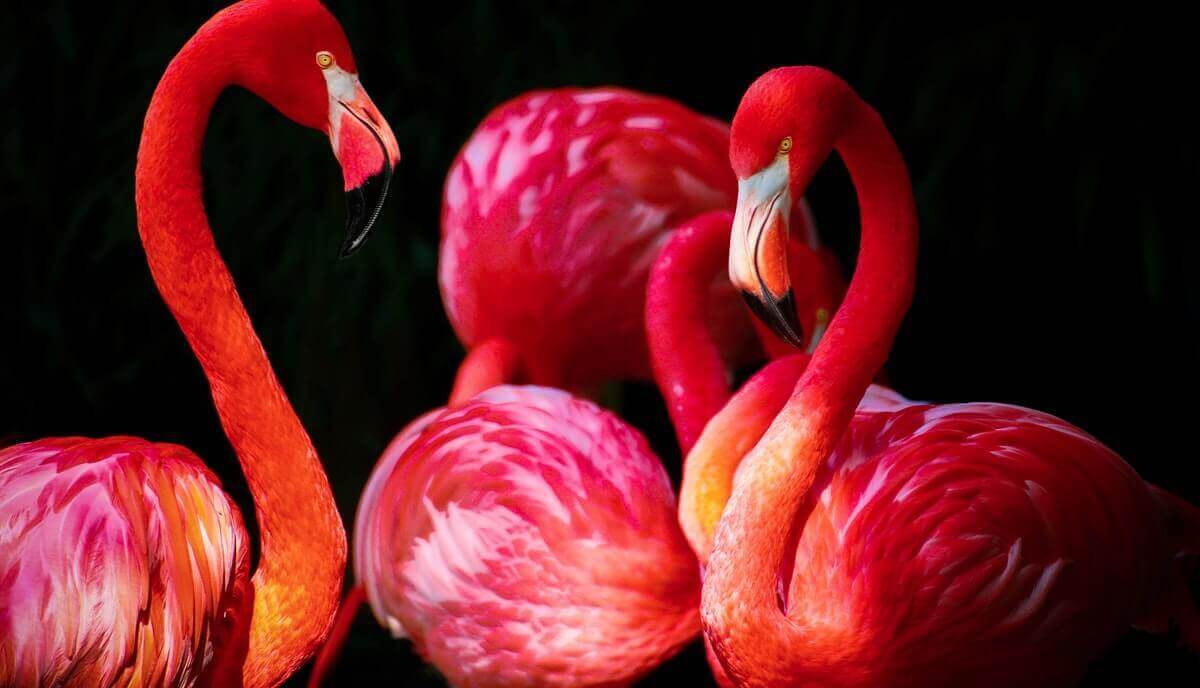 There are six species of flamingos in the world, and all are quite remarkable. Each species has its unique traits.

For example, Greater flamingos have their flirt dance as a mating ritual. Lesser flamingos live and feed in poisonous lakes of Africa. Other flamingo species also have their unique traits.

The question is, what can we say about their intelligence and if are flamingos smart.

How smart flamingos are?

Compared to most birds, flamingos are not much smarter.

Yet, a lot of people think that flamingos are dumb. They say it because the birds don’t have many natural predators in their habitat, and they stand around looking pretty all day.

There is some truth to this. Flamingos live in shallow wetlands, lagoons, or salt lakes. Because they inhabit these areas, there are not many predators to worry about. Their bodies are well equipped to live in a harsh environment and they find safety in large groups.

We say flamingos are smart as much as they need to be. Evolutionary they have developed resilience to harsh environments, but they didn’t need to develop high intelligence.

Not all birds need to know how to crack a walnut, like crows, and learn words like parrots. Flamingos are as smart as they need to be to survive.

Their intelligence is less focused on complex problems, but more on the social side of their life.

Most flamingo species are monogamous, and they mate with one partner in their life. Both parents take care of the egg while it is incubating.

The incubation period lasts from 27 to 31 days (source). Once it’s hatched, both male and female flamingos take care of their offspring.

Even in such a big group parents are able to recognize their chick and hear its calling. They feed the chick by producing so-called ”milk” out of their upper digestive system.

Flamingo milk is a secretion from the digestive tract, and it has similar nutrition as mammal milk. And you guessed it – it is pink in color.

Flamingos are not highly intelligent animals, but are they really dumb? The answer to that question is yes and no. It depends on what you mean by dumb.

The word “dumb” refers to having a lack of knowledge, understanding, or intelligence. Just because they can’t solve puzzles or mimic words, doesn’t make them dumb. Their intelligence matches their need to survive.

Flamingos breed and live in flocks of different sizes. Usually, the flock consists of several dozen birds, but there are records of flocks larger than one million birds.

Most of the species are migratory, and they would move to a warmer climate during colder seasons. If they were truly dumb, they would just stay in one place and die out.

Due to their ability to adapt their behavior and their bodies they are able to survive. They are not in danger of extinction. Unless humans start hunting them, they will be safe long in the future.

Even though we don’t think they are dumb, there are some fun facts about flamingos.

A recent study showed that it is easier for flamingos to stand on one leg instead of two. That’s why you see these birds sleeping while keeping the other leg close to their body.

Flamingos can fly, yet they never fly away from captivity. Again, this doesn’t mean they are dumb; they are just happy.

In captivity, they can live up to 50 years, while in wild their lifespan is between 20 and 30 years (source).

Flamingos feed with their head upside down in the water. This can seem stupid, but their beaks are adapted to catching food in shallow waters, and this style actually makes sense.

Which birds are the most intelligent?

Flamingos definitely don’t come at the top of this list, so let’s see which birds are the most intelligent. When we talk about intelligence, we mean the ability to solve problems.

Most birds are not able to understand causality and predict future events. The most intelligent birds can analyze the situation, and come up with a solution, and even use tools to get food.

Crows and ravens come from the same family (Corvus) and are considered by many the most intelligent birds in the world. Some research even says that these birds are smarter than apes.

They find creative ways to get to their goal.

Crows are seen using breadcrumbs to catch fish, throwing walnuts from height to break them, pulling human fishing lines to grab the hooked fish. They are able to think about causality and come up with complex solutions.

Not all parrots share the same level of intelligence, but many species stand out. Some of them are Amazon Parrots, Cockatoos, Macaws, African Gray, and Keas.

Test show that some of these parrots are as intelligent as small children. We all know their ability to mimic words and sounds, but they can do other things as well.

They can also understand words, pass temptation tests, and much more.

Jays are smaller relatives of crows and ravens and part of the same family. Jays are among only a few species that use tools from their environment.

They are also known to imitate birds and sounds from their environment. Jays would mimic hawk sounds to warn others that danger is near.

Also, they figured out how to remove the bitter substance from ant toxins before eating them. They do this by rubbing the ants against their feathers, practically scrubbing them before eating.

Flamingos may not be the smartest bird species in the world. They are as intelligent as their environment requires them to be.

So, in conclusion, we can say that flamingos are not smart because they don’t use complex problem-solving to survive. Their bodies have developed other feats that help them to survive, and they find safety in larger groups.

Thank you for reading. If you liked this article, here’s another popular flamingo post: White Flamingos.