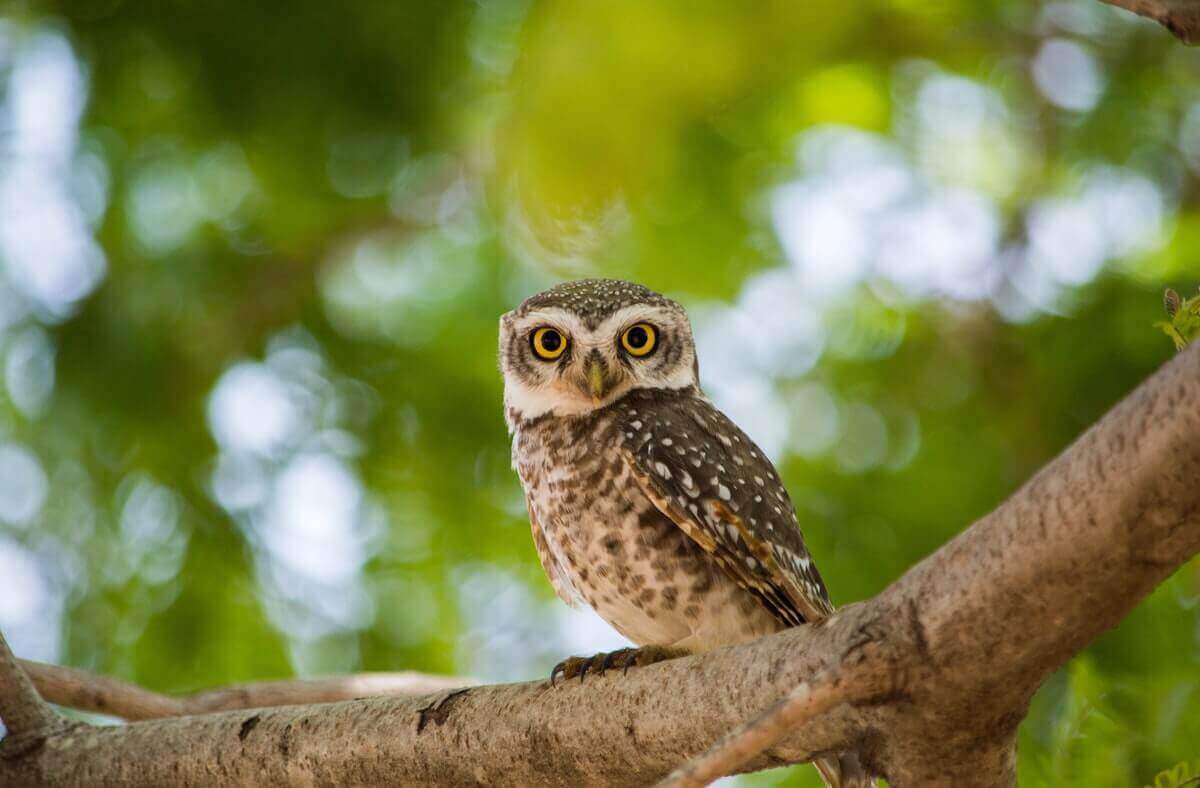 Owls are pretty unique birds known for their exceptional sight and hearing abilities. Besides that, owls represent the symbol of wisdom. You probably have heard the saying ‘as wise as an owl’.

But is it true that owls are wise? How smart are owls?

Despite the reputation of being smart creatures, owls are not intelligent birds. In fact, many birds are smarter than owls. The reason owls are not smart lies in their brain capacities. Namely, two-thirds of an owl’s brain is devoted to the senses of hearing and vision, which leaves only one-third of its brain available for other cognitive functions.

Bird intelligence has always been an interesting topic to explore. By doing numerous experiments on different bird species, researchers have realized that many birds exhibit smart behaviors that were not attributed to instinct.

But what about owl intelligence?

Owls are birds of prey specialized in hunting and killing small animals. No wonder; they are gifted to see their prey from miles away and to hear even the slightest movements in their surroundings.

However, these two senses are also the main reason owls are not overly intelligent. 75% of an owl’s total brain capacity is in use by only doing these two basic functions. Which leaves only 25% of its brain to process all other operations.

Also, in a recent study conducted, a group of owls was tested in a simple string bait experiment. In other words, an owl’s task was to get the remote bait that is connected to a string.

This kind of experiment doesn’t require previous experience, and many birds have completed the task in no time. But not the owls.

Only six out of twelve owls were able to solve this easy string-pulling task. With this kind of result, owls performed far worse than many other birds tested.

Does that mean that owls are dumb birds? Absolutely not! Some owl species have displayed an advanced way of hunting by luring their prey in a fascinating way. To which we will return shortly.

Let us first see how smart are owls concerning other birds.

Are Owls Smarter Than Ravens and Crows?

No, owls are not smarter than crows and ravens. Crows and ravens are considered to be one of the most intelligent birds on the planet. Some researchers go even further and claim that birds from the Corvidae family are smarter than apes.

These two types of birds know how to use tools, tackle complex problems, share knowledge, and even mourn their dead. No owl in the world can perform either of these tasks.

Are Owls Smarter Than Eagles?

Eagles and owls have a lot of things in common. Both are solitary birds of prey with exceptional vision and hunting abilities. But what about intelligence?

Owls are not as intelligent as eagles. In fact, eagles are believed to be one of the smartest birds of prey, if not the smartest, whereas owls are down at the lower end.

Which Owl is The Smartest?

Burrowing owls have an impressive way of ‘bait and wait’ strategy to catch prey. Namely, owls were collecting the dung, which they were using to lure beetles to come out of the burrows.

So, the fact that they were clever enough to deploy bait to attract their prey places the burrowing owls in the position of one of the smartest owl species.

Why Are Owls Considered Wise?

The saying that owls are wise dates all the way back to ancient times. Different cultures have believed that owls represent symbols of wisdom because of their unique appearance and mystical night lifestyle.

But not all cultures considered owls as wise creatures. Let’s see what owls have represented in different parts of the world.

In Greek mythology, an owl represents Athena, the goddess of wisdom and knowledge.

In numerous paintings of that time, the goddess Athena was painted in a companion with an owl.

The connection between owls and wisdom is unknown. However, it is believed that the symbolism is associated due to the owl’s ability to see in the dark.

Unlike wisdom in Greece, in Native America, owls were usually associated with death.

The Aztecs and the Maya considered owls symbols of destruction and death.

The Ojibwe tribes viewed the owl as a symbol of death and evil.

The Pawnee associates owls as a symbol of protection.

The Puebloan people viewed owls as the god of death, as well as the spirit of fertile.

In Japan, it is quite contrary. Owls have the status of something positive, and they represent a symbol of fortune and wisdom.

Also, an owl in Japan is viewed as good luck and represents protection from suffering.

Like Greeks, Roman people associated owls with Minerva, the goddess of wisdom and prophecy.

They also believed that owls could predict the future and therefore warn people and bring wisdom.

However, it is trusted that the death of many famous people from that time, including Julius Caesar, was predicted by an owl.

Owls are amazing creatures in their own right, but they are far from being smart birds. Owls are as intelligent as their environments require them to be. Their brain is tiny, and it is mostly dedicated to the sensory processes, with very little room for learning abilities or intelligence in general.

Thank you for reading. If you liked this post, here’s another popular read on owls: Owl Colors.