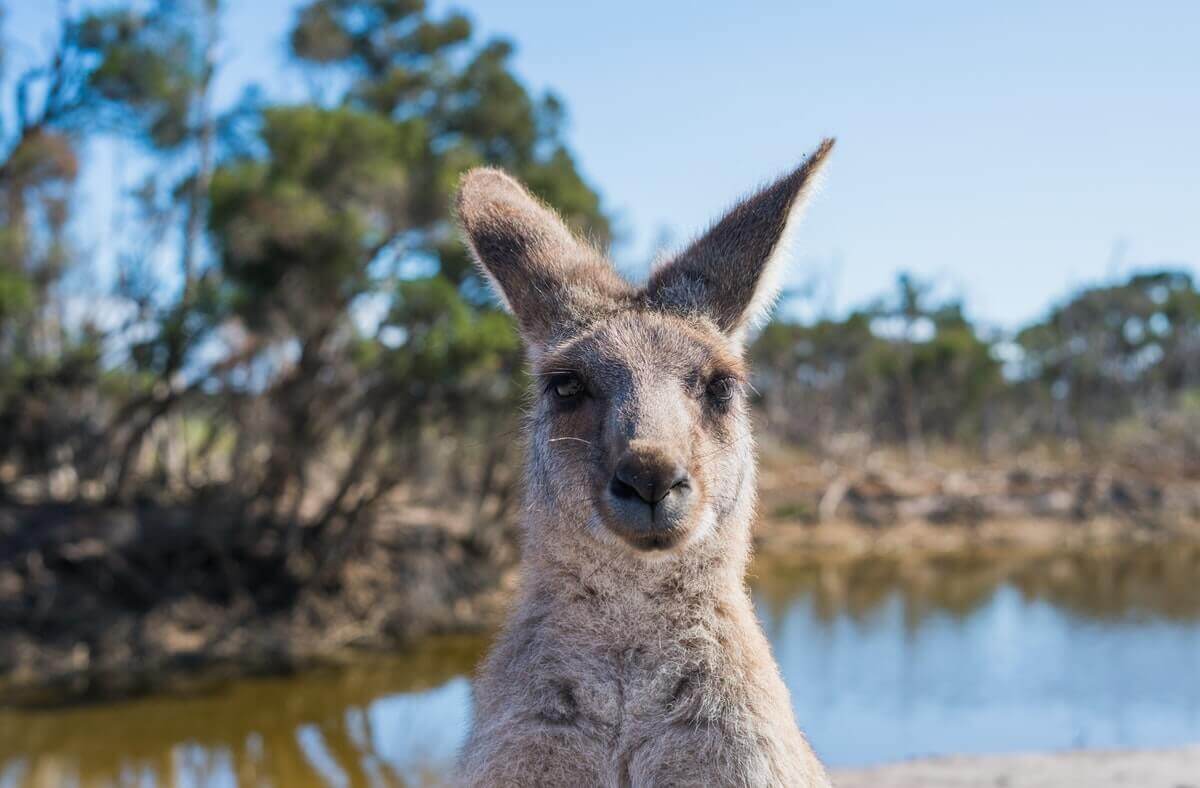 You’ve probably heard of stories where kangaroos hopped onto the road with the full-on glare of vehicle headlights but refusing to budge. Also, you’ve heard speculations about kangaroos and you’re seriously wondering, “are kangaroos smart?”

In this article, I will answer the question with reasons to back up my answer based on my research.

Yes, kangaroos are smart animals. They have shown intelligent behavior in different situations. In a recent study, kangaroos have displayed high levels of cognitive functions by communicating with humans in order to get food. Another intelligent behavior seen in kangaroos in the wild is the way they lure their predators into the water so that they can fight them back.

Why are kangaroos considered smart?

Kangaroos hop, so they move in only one direction and they don’t hop to the next spot if they can’t see where they’ll be landing.

Of course, kangaroos are not as smart compared to humans but as non-domestic animals, they exhibit some attributes that other wild animals don’t which is considered smart.

Dedicated researchers and wildlife enthusiasts carried out experiments and studied kangaroos, and here is what they found.

Kangaroos can communicate with humans

So, a lot of you might be on the edge of your seats and wondering, “The Parrots kind of way?” Of course not! Kangaroos can’t talk. But they can communicate in the way our dogs and cats do, even if they were not as domesticated.

To validate this fact, a group of scientists carried out an experiment on about 10 kangaroos from an Australian Zoo in an enclosed setting – the kangaroos were partly domesticated so they didn’t pose any potential harm to the scientists.

The kangaroos were locked in with a box of food and a lone researcher. The researcher confirmed that when the kangaroos couldn’t get the food out after a while; the kangaroos resorted to asking for help. And not verbally, but how the average domesticated pet would ask.

He said that the kangaroos made gestures by looking between him and the box and later they began to stroke his hands and legs.

These were surprising results, which showed that these hopping animals possess higher mental capabilities than previously thought.

An animal behavior scientist explained that this was their way of communicating their needs. Compared to the same research done on wolves, they resorted to ripping the box apart.

Related Article: How Smart Are Lions?

Now, let’s take a detour to the wild. Although most of the kangaroos’ natural predators like the Tasmanian tigers, the thylacines, marsupial lion, and wonambis have gone extinct, humans and dingoes occasionally prey on them.

Most animals in the wild escape their predators like… Well, how wild animals do – run away – but not kangaroos. They run with a plan.

Kangaroos are muscular animals with very good swimming abilities. These natural gifts have helped them tremendously in the wild.

When kangaroos are pursued by their predators, their first instinct is to locate a water source and when they do, they lead the predator right into it.

Once they succeed in getting them into the water, they use their forepaws to drown them! That’s about the smartest a prey in flight mood can get.

Another important characteristic that affects the level of the kangaroo’s intelligence lies in their social life. Social intelligence results in higher mental capabilities, unlike a solitary lifestyle.

However, it is worth mentioning that not all animals that live in groups are necessarily smarter than solitary animals, but social structure certainly affects cognitive abilities in a positive way.

Kangaroos live in a group of typically ten or more individuals, where’s the most dominant male is the leader of the group.

Kangaroos have several ways of building cohesion. Nose touching, sniffing, or simply producing “clicking” sounds when they are happy and affectionate.

Kangaroos also have a unique way of displaying dominance or trying to win a mate. They box.

Boxing among males is a scene that is often seen in a kangaroo mob. Typically, the older kangaroo comes out as a winner because male kangaroos never stop growing.

As a result, the older the kangaroo, the more dominant it gets.

Although many people tend to believe that kangaroos are not overly smart animals, recent studies have suggested the opposite. A kangaroo is smarter than an average wild animal. Apart from social intelligence, kangaroos showed a way of communication with humans, as domesticated animals would display. Besides, kangaroos have probably the most clever defensive tactics against potential predators in the whole animal kingdom.