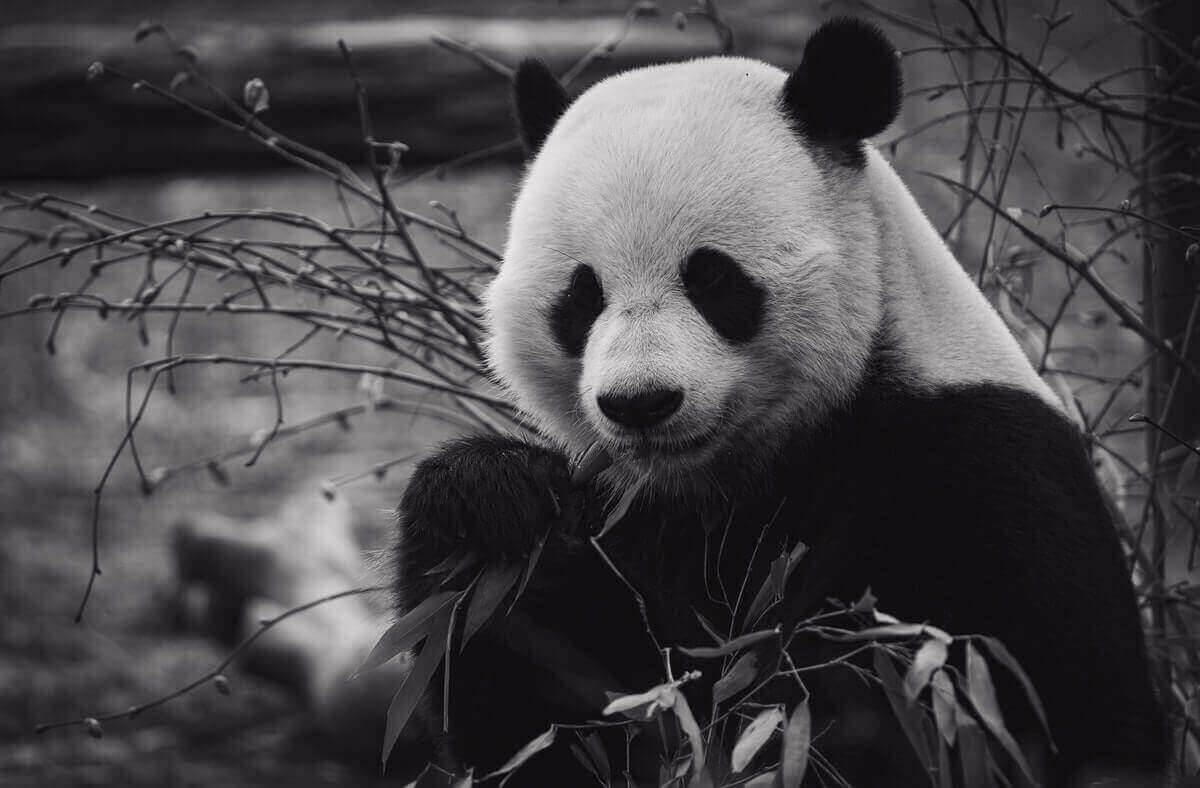 The exact diet of individual animals is vastly varied. However, the animal diet is split into three main categories. Herbivores, Carnivores, and Omnivores.

Today, we are going to talk about herbivores, to be exact, herbivores that eat bamboo.

While some animals eat bamboo as the main part of their diet, others may occasionally forage on this giant woody grass. 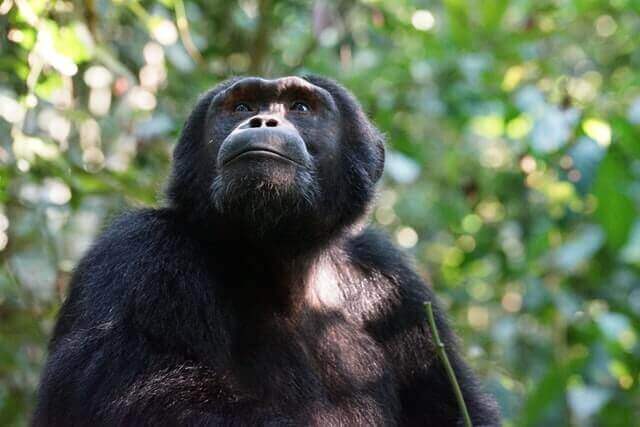 Chimpanzees or chimps are great apes that inhabit African savannas and forests. Chimps are quite familiar to all of us, probably because their behavior is very similar to ours.

Chimps live in complex communities that count 20 to 150 individuals. The hierarchy is purely based on dominance, and males are normally dominant over females.

Male chimps are also responsible for food, protection of the territory, and other group members. The more dominant chimps usually tend to be more aggressive.

Most chimpanzees are omnivores, meaning they feed on both plant and meat-based food. Their diet is very diverse, including bark, fruits, insects, leaves, meat, nuts, and bamboo.

However, chimps are animals that eat bamboo only occasionally, and it is not their main source of food. The bulk of their diet is fruit, around 60% of the total intake. 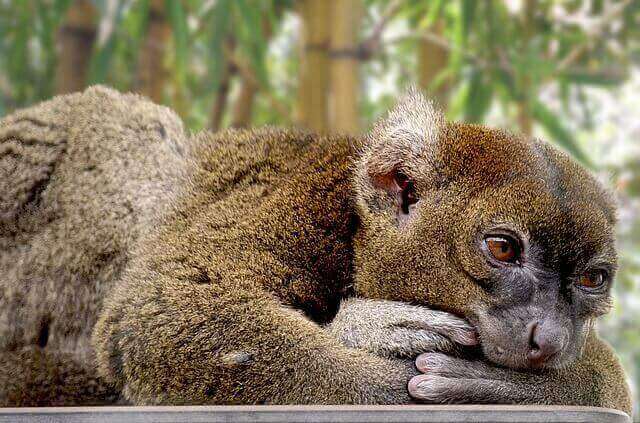 When we talk about animals that eat bamboo, we must not forget bamboo lemurs.

Bamboo lemurs or gentle lemurs are primates that only live on Madagascar. Bamboo lemurs are medium-sized animals recognized by their short muzzles, round ears, and grey-brown fur.

Gentle lemurs are social species that live in groups of up to four individuals. They are primarily arboreal and are mostly active after dawn.

Bamboo lemurs live in dumb forests where bamboo grows. What’s interesting is that these animals eat bamboo exclusively, but biologists are not sure how they can detox such a high amount of cyanide found in bamboo shoots.

On a daily average, the bamboo lemur eats 500g of growing tips of giant bamboo – that dosage of cyanide would be lethal for most mammals. (source) 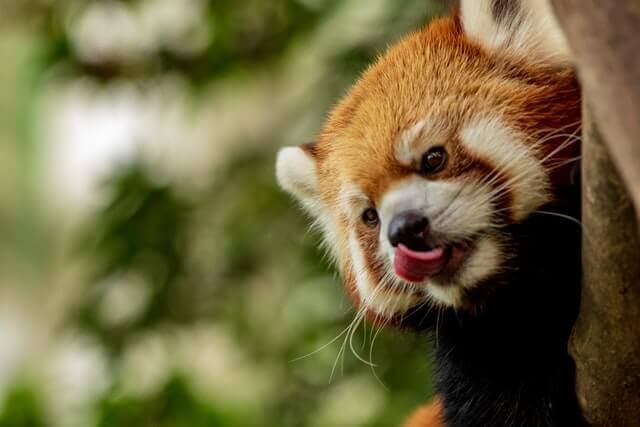 Another animal that eats bamboo as its main source of food is the red panda. In one day, red pandas can eat approximately 20 thousand bamboo leaves.

Despite their name, red pandas are not related to giant pandas.

Red pandas are solitary, territorial animals that are usually active in the afternoon and late evening. They are excellent climbers, and they spend their time primarily on trees.

Besides bamboo (90 – 95 % of the total diet), red pandas are animals that eat grasses, roots, bark, leaves.

Due to their low calory intake, these creatures are on a tight energy budget.

Unfortunately, their population is unstable, with a population of fewer than 10,000 individuals. 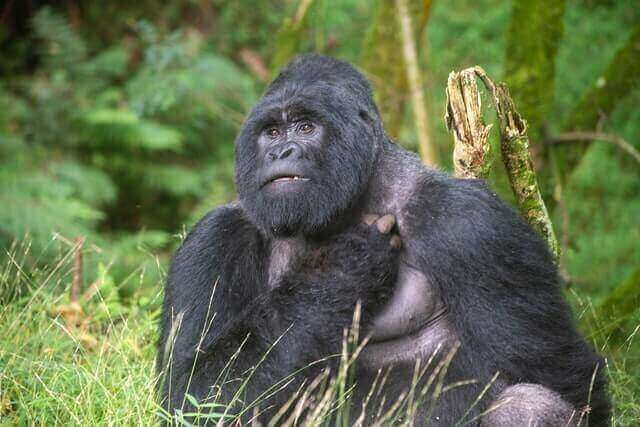 There are less than a thousand mountain gorillas left in the world, and the majority of the remaining inhabit jungles and forests of the volcanic mountains of Central Africa.

Mountain gorillas are great climbers, but they spend most of their time on the ground.

They are social primates that tend to live in communities that consist of 30 members. Even though they have the reputation of being aggressive animals, they are usually shy and calm unless being previously disturbed.

These apes have access to a wide range of plants suitable for their vegetarian diet.

Most of their diet is composed of leaves, bamboo shoots, stems, and fruits. In fact, 86% of their food intake is based strictly on these plants. 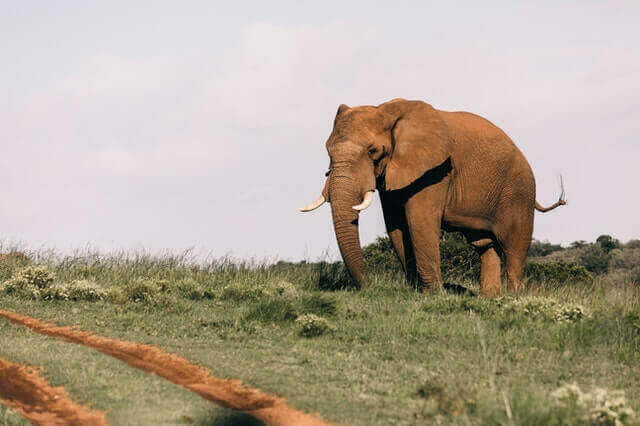 Elephants are gentle giants that live in forests, deserts, and savannahs. These big-eared animals are extremely smart, and their mental capacity is frequently compared with that of primates.

Elephants are known to be social animals, and often they create fusion societies (multiple family groups). In which the group is typically led by the oldest cow.

Almost eighteen hours or 80% of their activity is spent eating. Elephants eat up to 300 lb of vegetarian food daily. In fact, elephants feed on 112 different plants.

Besides eating a lot, elephants also drink enormous amounts of water. They consume 152 L (40 gal.) of water every day.

When it comes to bamboo, elephants mostly prefer eating Mai Roak bamboo. However, their favorite food is tree bark because it is rich in calcium and roughage, which aids digestion.

Sadly, both African and Asian elephants are endangered due to frequent poaching. 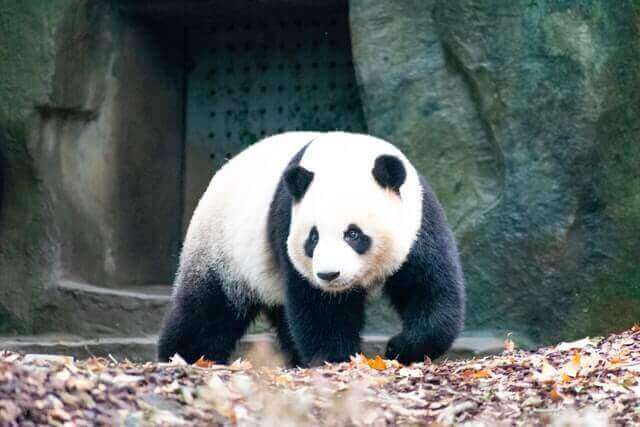 Due to their uniqueness, for many people, giant pandas are the cutest bear species. Despite carnivore taxonomic classification, pandas are herbivores animals that eat bamboo as a bulk of their diet.

In fact, giant pandas are the only bear species that have a digestive system that depends nearly entirely on bamboo.

Due to their poor nutrient food resources, pandas have a lower metabolic rate and generally live a sedentary lifestyle.

Giant pandas are primarily solitary animals, and they spend most of their life roaming and feeding in the bamboo forests. 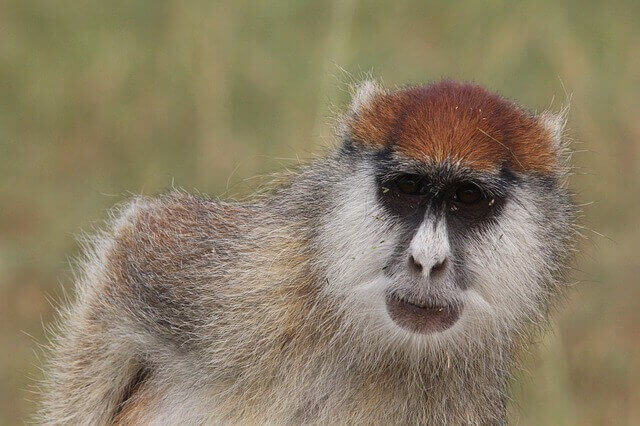 The golden monkey is ape species native to the volcanic uplands of Central Africa. These primates are recognizable by the orange mark on their back, upper flanks, and forehead.

Golden monkeys are very social creatures, and they format groups known as fusion. The fusion is a seasonal formation that contains up to 600 individuals during summertime but splits into subgroups of 50 to 60 members when the cold weather begins.

These primates are primarily arboreal animals, and their diet may vary depending on the season.

Bamboo rats are small-sized animals that eat bamboo exclusively. These rodent rats are found in bamboo-covered mountains of Southern and Eastern parts of Asia.

The bamboo rat uses its teeth to create extensive burrows in order to feed on bamboo roots.

They spend most of the daytime under the ground, but during the night they forage on fruits, seeds and even climb the bamboo to pick up nutrients for later.

These slow-moving creatures are usually solitary, and due to their underground lifestyle, their behavior was not extensively studied.