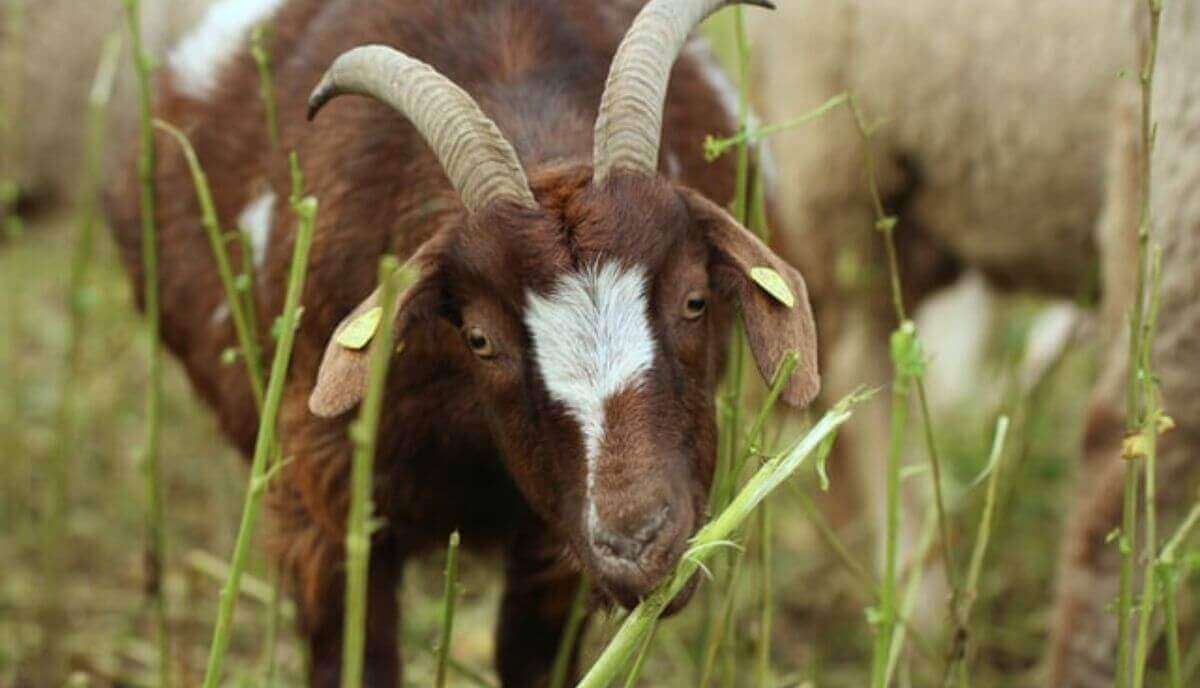 Chewing cud is a process whereby herbivores regurgitate the food they had grazed on earlier and chew it a second time. Although usually, the herbivores are animals that chew cud, not all herbivores are cud chewing animals.

Herbivores that chew their cud are called ruminants. The word ruminant comes from the Latin term ruminare, which means ‘to chew over again’, which is literally what chewing cud is; chewing again. Since humans do not chew cud, the idea of regurgitating food to chew it again seems disgusting.

However, the stomach of a ruminant cannot digest cellulose, which is found in all the fiber they ingest from the vegetation they graze on. Chewing cud is the way ruminants get more value for their food.

In order to break down this fiber, a ruminant’s stomach is divided into four somewhat specialized chambers that present a unique digestive process.

There are many species of ruminating herbivores, both domestic and wild. 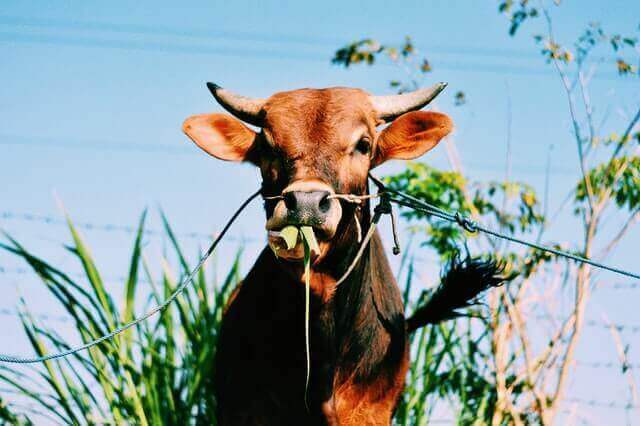 Cows are probably the most known animals that chew cud. Perhaps because cows have been a domesticated species for thousands of years, humans have had a longer period of time to observe their behavior. Cows are kept for commercial use, such as beef, milk, and leather production. They are also raised for sport, used as a measure of wealth, and even revered as objects of sacred worship.

In nature, calves begin gazing at about 5-7 months. The weaning period helps calves to develop their rumen. The rumen is the first of the stomach chambers, where plant fibers are broken down by microbes in a process of fermentation; it is a pre-digestion in a sense.

Depending on the function that they serve, cows have different names. Heifers are female cows that have never given birth. Once they give birth, they are called cows and are kept for milk. 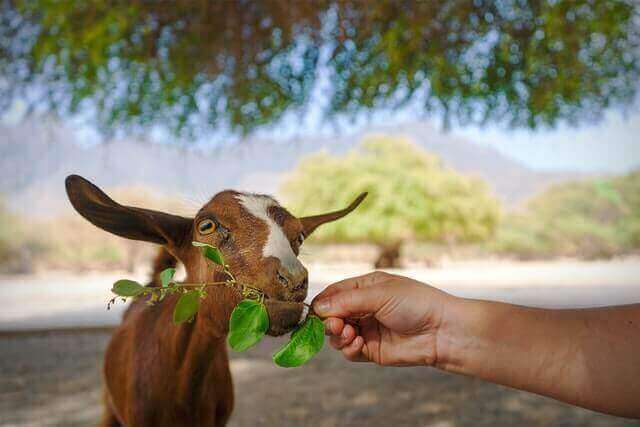 Goats have a similar digestive system as cows and their rumen can hold from 3-6gallons (13-27liters) of material. During periods of rest, goats will chew cud, mixing it thoroughly with saliva. When swallowed, it goes into the second stomach chamber called the reticulum.

A goat’s reticulum has a honeycomb lining that acts as a sieve, preventing any rubbish the goat may have swallowed from going through the digestive tract. It may be of interest to know that there are times when a goat will not chew its cud; like when it is bloated, or when its rumen becomes acidic (often due to a change in diet). If treatment is not administered, these conditions could prove fatal.

These cud chewing animals are often reared for their meat and milk. Some species are raised for their fur such as the angora and cashmere breeds and in some parts of the world, goats are kept as pets. 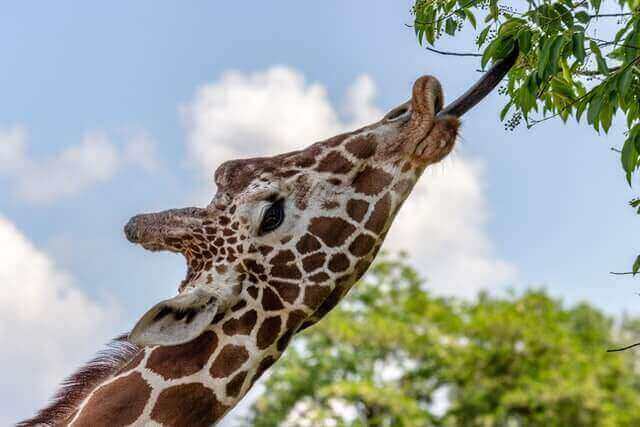 These gentle giants are easily identified as long-necked, brown spotted, acacia-eating, savannah-dwelling herbivores. Giraffes have adapted prehensile tongues that grow to about 18inches for feeding. This means that they grasp their food by wrapping their tongues around it, similar to the way a monkey would use its tail for grasping branches.

They too chew cud and this process is especially fascinating because it can be observed with more clarity due to the giraffe’s long neck. When their chewed cud moves from the reticulum to the omasum, which is the third chamber, the volatile fatty acids, and ammonia that were generated in the first two chambers due to fermentation are absorbed.

Interestingly, giraffes graze for 16-20hours per day and consume an amazing 34-75kg (75-165lbs) per day. And is it any wonder, considering their physical size?

Curiously, they sleep for 5-30minutes per day, mostly on their feet. Most herbivores graze, however, the term used to describe a giraffe’s foraging is ‘browsing’. 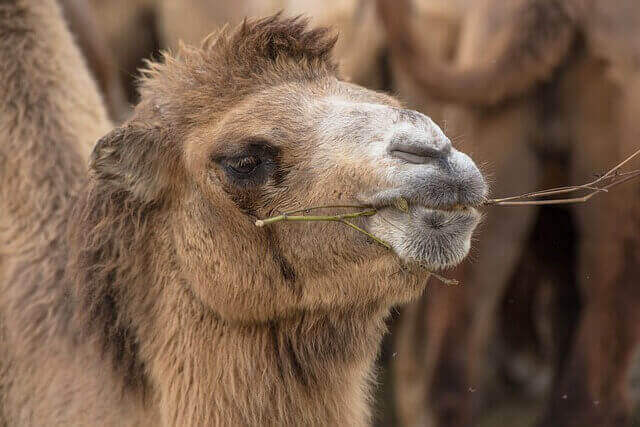 Talking about animals that chew cud, we must not forget camels. Camels, like giraffes, are identified by their unique features starting with the humps on their backs. They are also associated with long-distance desert travel as pack animals and known for their ability to go without drinking water for long periods of time, from 1 week up to even 10 months if there is sufficient foliage.

Although camels can drink up to 100litres (25gallons) of water in less than 10 minutes when water is available, their ability to stay hydrated for long periods of time is owed to the fact that they are excellent at regulating how the water in their bodies is used. They minimize sweating with the aid of their wool coat and by allowing their body temperature to rise up to 41˚ C (106˚ F). They also reabsorb water moisture from their nostrils when exhaling, minimize the amount of urine output and produce dry feces.

Perhaps due to their survival needs, camels are the one ruminant that does not have four compartments. A camel’s digestive system has three compartments similar to the rumen, reticulum, and abomasum, the final of the four stomach chambers in all ruminants. This means that the digestive process is shorter, which is an added advantage as it reduces perspiration.

Apart from their value in travel, they are also kept for their milk, meat, hides, and wool. Interesting facts about camels; they have a split top lip and each side can move independently, their nostrils can be squeezed shut to keep out blowing desert sand from their lungs. They will also occasionally kick or even when agitated, and when excited, will huff so sharply, that they will spit. 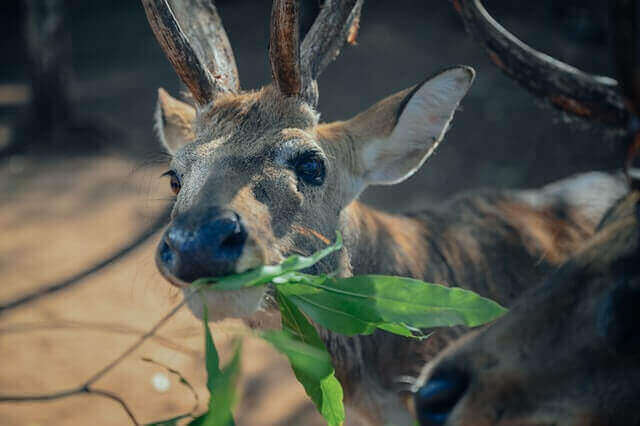 Another ruminant animal that chew cud is the deer. Deer have a wide range of diets, and their intake largely depends on the part of the year. Yet, their favorite foods are primarily based on leafy parts of woody plants, forbs, grass, fruits, and mushrooms.

If there is enough food in its environment, the deer will eat 6 to 8 % of its total body weight per day. As a result, a 200-pound deer will eat anywhere from 12 to 16 pounds of food every day.

Once their first stomach is filled with food, the deer will rest down to chew its cud. After a certain period of time, the deer will start its second phase of chewing its cud by passing the food (re-swallowing) to the second portion of the stomach, also known as the Reticulum. This part of the stomach is responsible for filtering out a useless matter, and altogether this process may last for up to 16 hours.

It is said that this digestive process was an evolutionary necessity before the domestication of animals. Most herbivores will graze with their heads down, which is a vulnerable position to be in, in the wild. Being able to grab what they can while their heads are down, and digesting it later enables them to eat in large quantities quickly. It also comes in handy when they need to suddenly stop feeding and flee from predators.

And that would be all for ‘animals that chew cud’. If you enjoyed this article, I would recommend you to read – Animals That Eat Grass