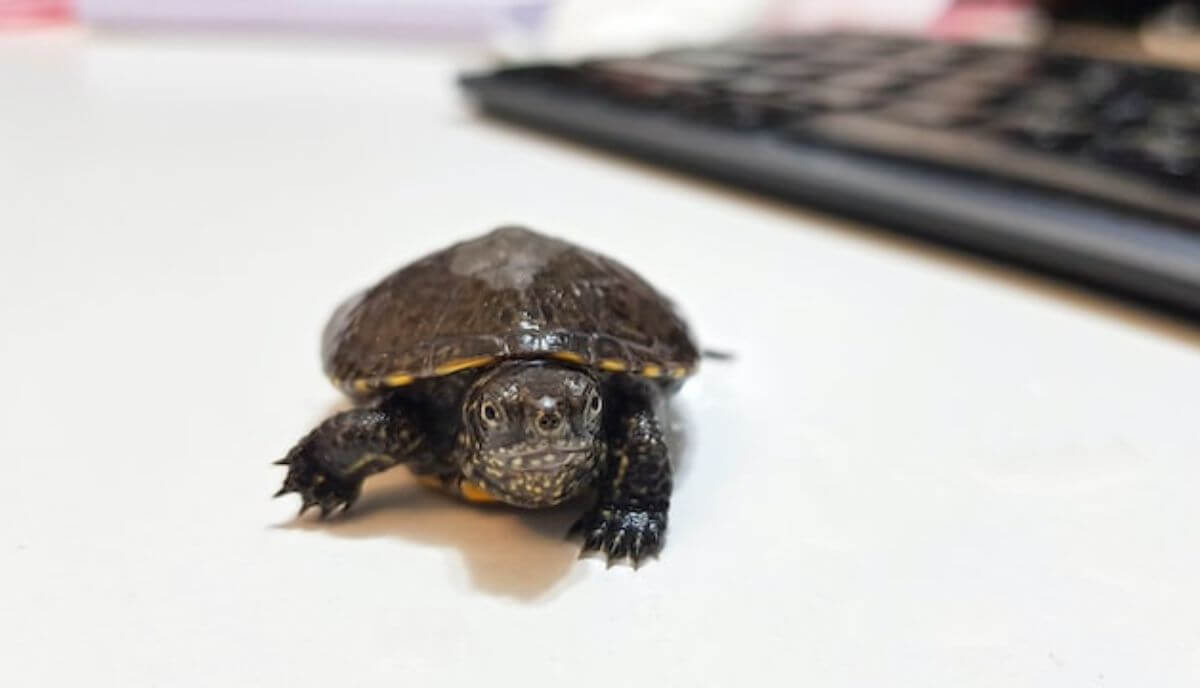 Have you ever wondered which are some of the smallest turtle species in the world? In case you did, now it’s time to find out.

People nowadays are looking to keep tiny turtles as pets because these are ideal for captivity, very easy to care for, and don’t take up that much space.

This article talks about the top 5 world’s smallest turtles, their habitat, lifestyle, and diet, along with some interesting facts.

There are 13 families of turtles, including over 356 different turtle species, ranging from 9 feet to only a few inches in length.

Among these, the smallest species of turtles are listed below:

The speckled padloper tortoise is the smallest turtle ever identified. While the mature female can grow to around 3.5 inches, adult males can only reach a maximum length of 3 inches, weighing on average 4 ounces.

These tiny tortoises consume the leaves and flowers of many plants, much as most tortoises do.

Their extraordinary mating ritual is amongst their most noteworthy characteristics. When preparing to mate, the male and female start swiveling their heads. Other turtle species don’t exhibit this kind of behavior.

As its name implies, the speckled padloper tortoise has little black spots all over its shell, which is a shinier color while the tortoise is young.

Most turtle species, the speckled padloper tortoise included, have somewhat bigger females than males. The females need to be larger because, unlike the males, they must carry the eggs until these are laid.

Speckled padloper tortoises survive by squeezing and remaining hidden in cracks. They inhabit the rocky terrains of most South African regions.

Being very small in size, they are easy prey for various hungry predators in South Africa. As a result, the speckled padloper tortoise is an endangered species.

However, the leading cause of this is human activity. Over time, people have ruined its habitat by building highways, leading to fatal vehicle accidents and poaching.

As you would expect, it’s against the law to acquire a spotted turtle since this specie is considered endangered. In other words, unless you obtain special authorization from the government, you will not be allowed to keep the world’s tiniest turtle as a pet.

Besides, getting one would be challenging because selling them is also against the law.

The bog turtle is the smallest turtle on the whole North American continent, measuring only 4 inches in length.

It can be found in the marshes covering a large area of eastern US, and you can recognize it by the yellow or orange marks on each side of its black-colored neck.

An omnivore that veers slightly toward eating animal products, the bog turtle prefers to feed on insects. However, it will also consume berries and some other plant species.

Even though the North American bog turtle has been protected in the US since 1995, scientists and environmentalists are still baffled by the species’ recent decline in numbers.

One of the reasons for this is the introduction of various invasive plant species like the purple loosestrife, which grows thickly and obstructs the little turtle’s mobility and access to food.

Besides, most of the bog turtle’s natural habitat was severely destroyed by urban development. This reptile was forced to explore drier meadows when the construction of buildings in its natural habitat started, putting it in greater danger of getting eaten, killed, or maimed.

Bog turtles are sought after by shady pet dealers due to their tiny size and appealing patterns.

They should not be kept as pets, as it’s said they can’t survive in a cage. Selling bog turtles is out of the question too. In case you ever come across one, be sure to leave it alone.

It’s easy to identify the musk turtle because it has a unique keel along the middle of its carapace and is brownish. The turtle’s length is only 3 to 5 inches.

Their natural habitats are lakes, ponds, rivers, or clear water small streams. They like the shallower areas of the body of water they live in.

You can find them on tree trunks or branches that dangle over rivers and ponds because they love soaking up the sun.

Musk turtles appear to be mostly carnivorous like other aquatic turtles, but they will also eat plants such as duckweed. Give them turtle food when keeping them as pets, and add shrimp, bloodworms, and mealworms to it as supplements.

You can keep this tiny turtle as a pet but know that it will need an appropriate tank that enables it to swim easily. The turtle won’t need deep water or to have its tank’s bottom covered in a substrate (like gravel).

You can decorate its surroundings with medium-sized gravel if you want the tank to look nicer. The water must be shallow so the turtle can get to the bottom of the tank and extend to the top without having to paddle too much.

Since musk turtles are very active, preparing a tank to accommodate at least 30 gallons of water for each turtle is generally advised.

You must keep an eye out for the male being too eager to pester the female (in case you decide to house the two together). If pestering occurs, separate the male from the female.

In addition, it’s not advisable to house two male musk turtles in the same tank.

Striped mud turtles might resemble musk turtles a lot, but their carapaces are flatter. These adorable turtles are among the world’s smallest species, growing no more than 4 inches.

Striped mud turtles are often kept as pets; they don’t require a large tank as they are super small-sized turtles. Given that it may live for between 30 and 50 years, the mud turtle is a great lifelong friend for anyone.

Being an omnivore, a striped mud turtle consumes fish, insects, algae, plants, and even carrion in its natural habitat.

In captivity, you can feed it earthworms and cut fish. At the same time, you can also give it leaves and seeds of plants.

In the wilderness, you can find striped mud turtles in Florida’s ponds and ditches.

Despite being adorable, they still aren’t the friendliest pets out there. On the contrary, handling or picking them up with your hands is not advisable because they bite quite hard.

And since the mud turtle bites, it’s rather more appropriate as a pet for older children.

This species differs from others in its category through behavior. For example, it spends much time wandering or relaxing at the tank’s bottom instead of sunbathing.

You should keep these tiny turtles in larger containers since it likes to walk and swim too.

While mud turtles don’t spend much time in the sun, building a platform with light above is still important. Their water temperature must be 70-80 degrees and never colder than 70 degrees.

They’ve got their “muddy” name from loving to dig in muck when hibernating. However, clay shouldn’t be present in their confinement, as hibernation is not advised for animals in captivity. 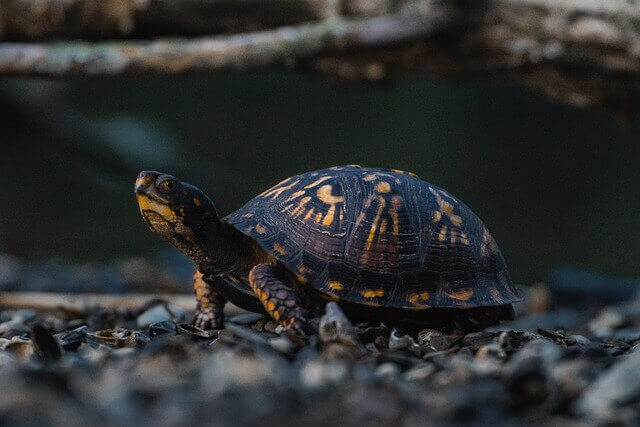 The Eastern box turtle is the last member on our list of the smallest turtles in the world. This cute turtle species is most frequently seen in nature.

This species is easy to identify also because it has a small hook on the top of its mouth and measures only 5 to 6 inches in length.

Spread across the eastern US, box turtles can often be found close to ponds, meadows, forests, and fields. It’s not unusual to spot them in other parts of the US either since they’re highly well-liked as pets.

Eastern box turtles are terrestrial even though they live primarily in ponds. It’s legal to keep them as pets; thus, they need a terrarium rather than an aquarium.

When their owners decide they no longer want them or need to relocate, they release them just about anywhere in the wild.

They consume snails, bugs, meat, and leafy greens like dandelion, clover, curly kale, and leafy salads in the wild. If you adopt one as a pet, you should feed them 80 percent of veggies and flowers and about 20 percent of fruits.

During summer and spring, box turtles can be kept in an outdoor enclosure, whereas in the autumn and winter, they should be moved inside.

Box turtles resemble tortoises because they have tall domes. As pets, they should be kept in dry environments such as wooden vivariums or tortoise boxes.

On the other hand, they need to have water, as well as a UVB light, much like any different type of turtle. If kept outside, sunshine will do the work.

What’s also interesting about them is that they have a strong defensive strategy. When under any threat, they will all curl up inside their shell, which they can clamp shut. Because of this, only a few predators can successfully feed upon them.

This section will answer some of the most common questions regarding tiny turtles (primarily for those who want to adopt one as a pet).

How Long do Small Turtles Live?

Small turtles have a lifespan of 20–50 years. This varies greatly depending on the species, but a lot of things come down to how well you take care of them. In other words, long-term turtle health and happiness depend a lot on proper care.

Small turtles make excellent pets because they take up little room, which means you can clean up after them very easily and fast. Land turtles, like the Eastern box turtle, are a great option if you don’t want to tend to an aquarium. What’s also great about tiny pet turtles is that they’re not at all demanding.

What is the Best Small Turtle for a Pet?

Musk turtles and box turtles will be the ideal small turtles for beginners. If you think you’re up for tending more to its environment and ensuring you won’t get bitten, you can get a mud turtle. Box turtles don’t swim and require a terrestrial setup, so it can be said they’re the easiest to care for.

There you have it! With this, we conclude the article about the five smallest turtle species in the world.

Whatever species you decide to adopt, make sure to buy only from reputable and reliable captive breeders.

And even while they might not be demanding as pets, turtles still need care and love. Adopt a tiny turtle only when certain that you can give it the attention it requires.

Thank you for reading! If you liked this article, here’s another popular read on a similar topic: Smallest Owls.