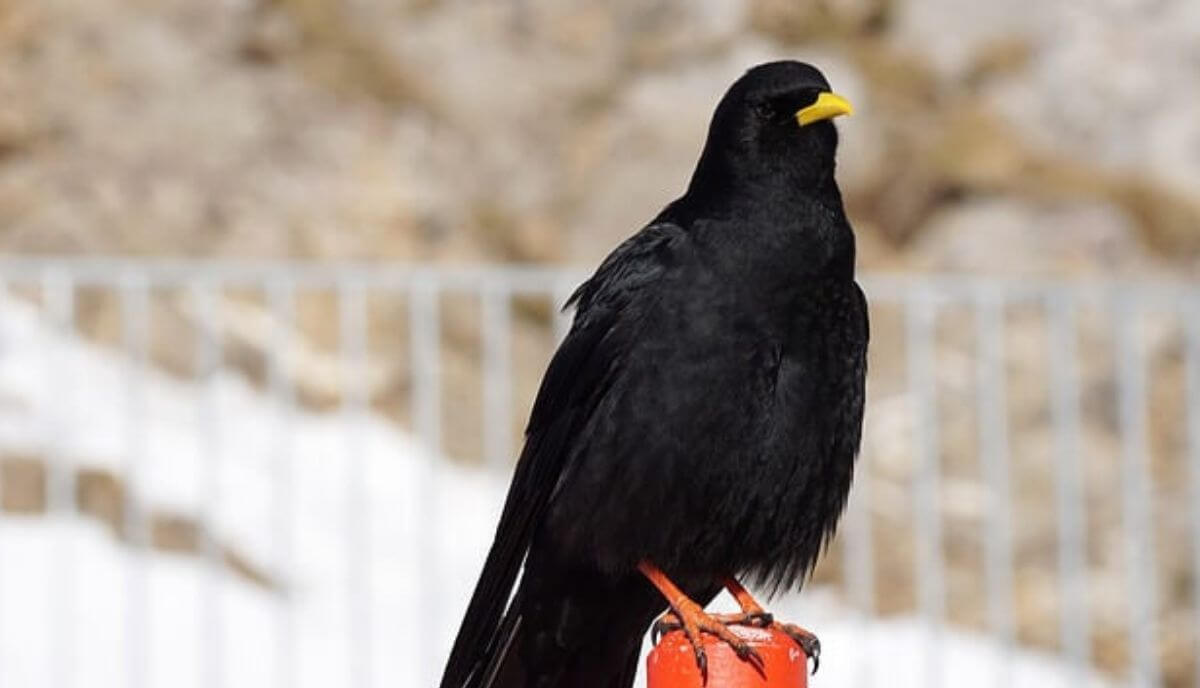 Did it happen to you to see a gorgeous black bird with a shiny yellow beak but wasn’t able to find its name?

Well, you are not alone.

Yesterday, this exact scenario has happened to me, so I decided to write an article for all of you out there that are interested in learning more about these beautiful black birds with yellow beaks. 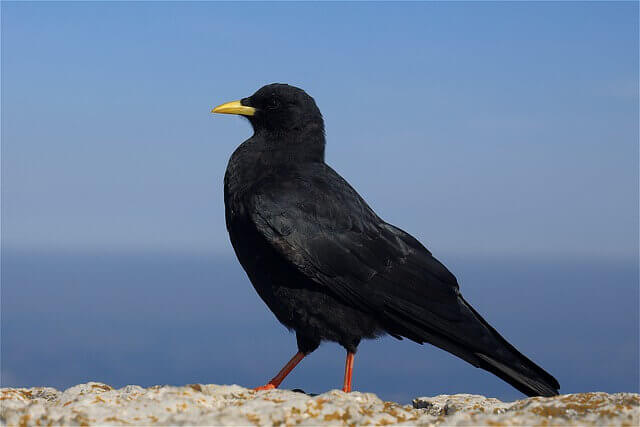 The Alpine chough, also known as the yellow-billed chough, is a crow family member that lives in the high mountains of Europe, Africa, and Asia. These birds nest higher than any other bird on the planet.

It is characterized by its beautiful shiny black plumage, yellow beaks, and red legs.

Alpine choughs are monogamous birds, forming a lifetime relationship with mates. They typically grow no more than 15 inches and weigh up to 8.6 ounces.

By being omnivores, yellow-billed choughs feed both on meat and plant based food. During the winter, they eat fruits, while in summer, they hunt invertebrates. 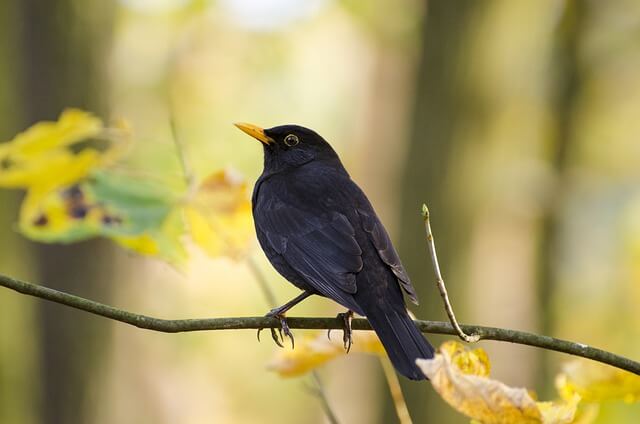 The Eurasian blackbird is a thrush bird residing in Europe and southern Asia. They are also found in North America and are migratory birds.

Female Eurasian blackbirds, on the other side, have brown plumage, brown beaks, and no eye rings. 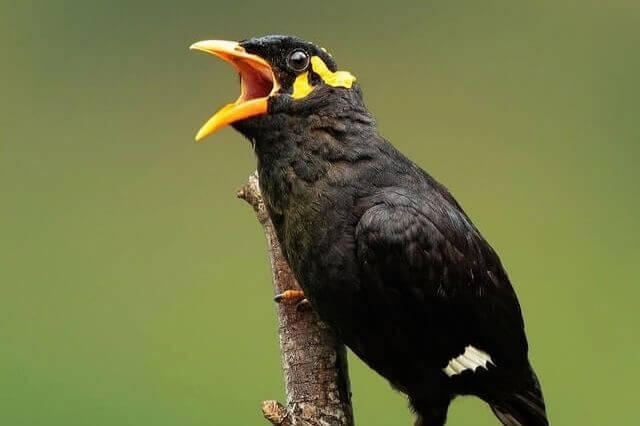 Speaking of black birds with yellow beaks, hill mynas are must mention species on our list.

This beautiful avian is a member of the Sturnidae family. They are native to India, the Himalayas, the Philippines, Thailand, Indonesia, and Southeast Asia.

Lately, mynas have become very popular pets, as they are pretty talkative and interesting creatures.

Adult male and female mynas have the same features. They have black feathers that show a hint of blue in the light. A yellow band of feathers raps around their neck and stops at the corner of each eye.

Their beaks are yellowish-orange, and their feet are a bright yellow. Hill mynas weigh about 0.3 – 0.5 pounds and are about 11.4 inches long. 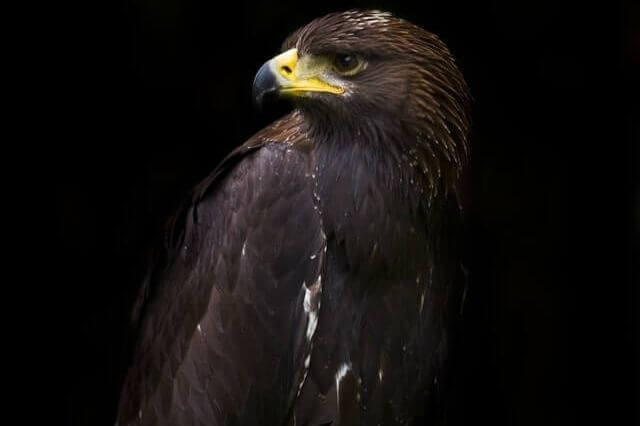 Common black hawks are medium-size raptors. They belong to the same family as eagles and old-world vultures.

They typically live in the mangrove swamps of Mexico and Arizona. But they breed in the warm parts of Central America, North America, and Peru.

Common black hawks weigh about 2 pounds and can grow to 21 inches in length.

The single white band of feathers on their tail distinguishes them from other hawks. Their beak is a faded yellow color with a black rim. Their legs are also faded yellow.

Most times, common black hawks fly at chill speeds to find prey. But they are avid hunters.

Common black hawks can sight game from 100 feet in the air. They can hunt while perching or on the ground. but they are such capable hunters that they can fight for food mid-air.

Considered to be apex predators, common black hawks eat crabs and invertebrates like snakes and insects. 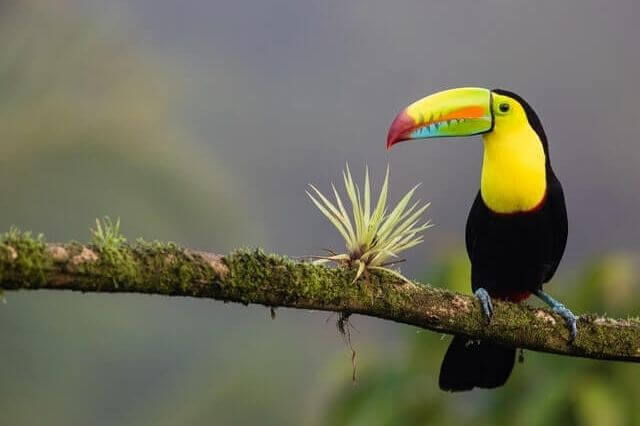 These unique birds belong to the family Ramphastidae. Members of this family have black feathers, colored beaks, and bills.

An average adult toucan weighs 2 pounds and can grow to 25 inches – its beak can grow up to 7 inches!

Apart from its vibrant colors, a toucan’s beak is a great wonder to many. It might come off as heavy and a burden to bear, but a toucan’s beak is light. The beak is made of keratin protein and is hollow with thin bones to support it.

Nonetheless, a toucan’s beak is no better than a blunt shovel or spade. They use it to dig and intimidate predators. But in an actual fight for their lives, their beak is useless.

However, toucans are intelligent birds – and they know for a fact their beaks are intimidating, so they use it to scare away predators. Still, toucans fail to deceive hawks, eagles, and owls, to whom they fall prey.

An example of toucans with yellows beaks is Yellow-throated toucans. These species live in parts of Venezuela, Peru, and Colombia. 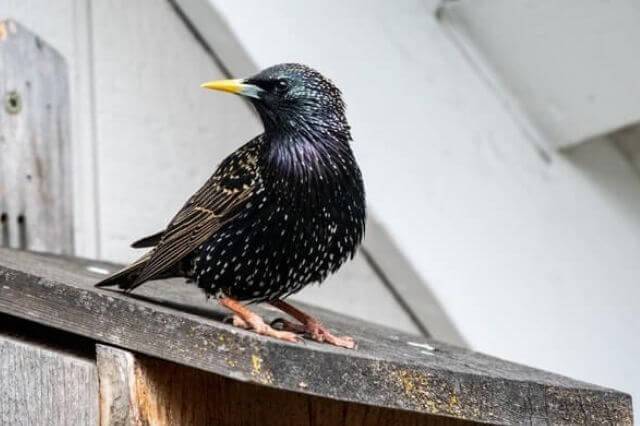 European starlings do not have vibrant colors, but they have a lot going on with their feathers. Their plumage is blackish purple, and their underbelly is a dark shade of green.

Unlike other birds, European starlings do not have melody – they are tone-deaf. Their song is a chaotic mixture of sounds made by other birds, men, and machines.

But, European starlings do not care about winning a medal but rather the ladies. Female starlings choose their mate judging from the complexity of a male starling’s song.

European starling weighs about 0.12 – 0.22 pounds, and they can grow up to 8.6 inches in length. Their diet consists of insects (caterpillars, spiders, and grasshoppers). While in winter, they can also eat berries and seeds.

Adult European starlings are prey to great raptors like falcon and hawk. Owls and raccoons will rather eat their eggs. 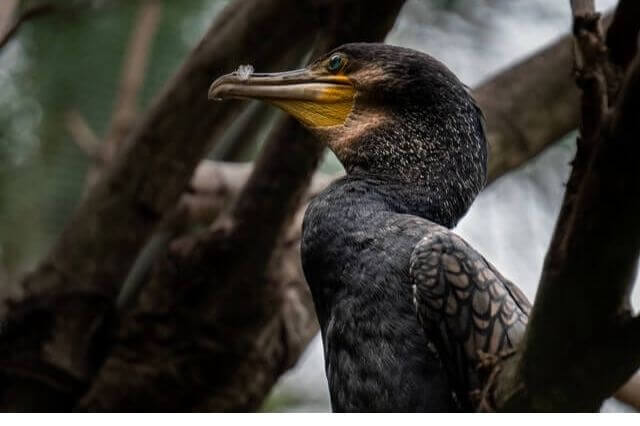 They got their name from their horn-like crest; it grows a white patch on both sides of their head in the breeding season.

These birds almost look like mute swans. But unlike mute swans, their wings are not water-resistant. After swimming and fishing, double cormorants spread their wing halfway to dry.

They prefer to eat fish but will also snatch amphibians or crustaceans given the chance.

Different animals prey on adult, young, and eggs of double-crested cormorants. Gulls and crows will prey on their eggs. Coyotes and raccoons, their chicks. 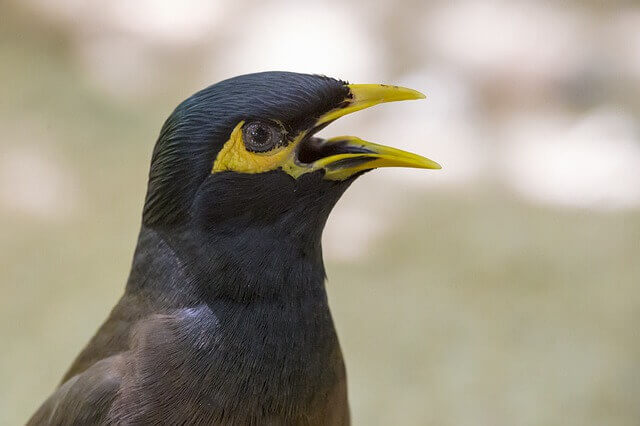 The common myna is a small black bird with a shiny yellow beak. They are native to Asia and have adapted to urban areas in Australia and New Zealand.

After gray parrots, the common myna is the next favorite of bird enthusiasts. These birds are beautiful, can mimic human speech, and are chatty.

Common mynas have brown feathers, black-hooded heads, white underwings, and underbelly. The color of their feet, beaks, and eye edges are yellow.

An adult mynah weighs about 4.3 ounces and is 9 inches long. Despite being tiny, these avians can be very aggressive, and during the breeding season, will actively defend their territories.

Mynas are omnivorous and opportunistic birds, and their diet consists of insects, worms, vegetables, and roadkill. 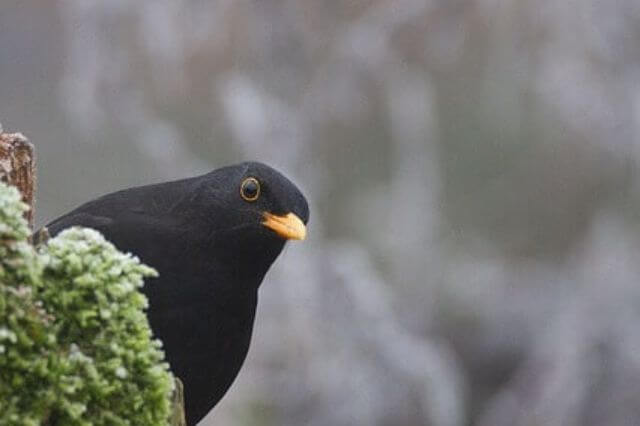 The black thrush bird belongs to the Turdidae family. It is native to the Oaxacan montane forests of Mexico, Honduras, and Guatemala.

Black thrushes have black feathers and feet – while some individuals have underbelly has a hint of white feathers. Besides their glossy yellow beaks, they have a yellow ring patch around the eyes.

Both female and male birds grow up to 9.3 inches in length, including their tail.

Black thrushes are omnivores, and they eat insects, worms, and berries. Snakes, domestic cats, raccoons, and a couple of songbirds prey on black thrush birds. 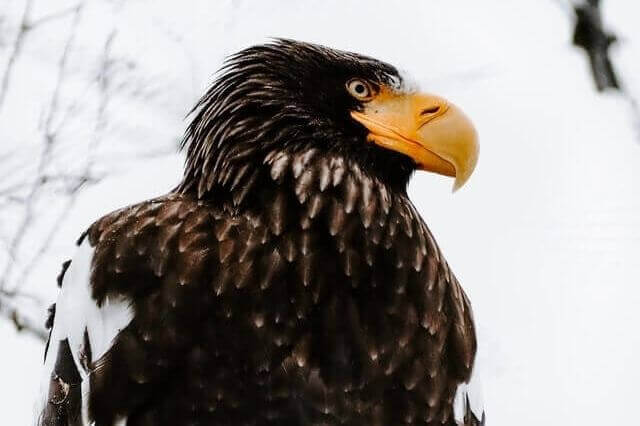 At 11 – 19 pounds, Steller’s sea eagle is the largest, and one of the strongest eagle species in the world.

Females can grow to about 3 feet and males to 2 ft 11. Steller’s sea eagles weigh more than harpy eagles and Philippine eagles but are smaller in height.

A plumage of Steller’s sea eagle is a mix of black and white feathers. Their underwing has some white feathers, and their thighs are white-colored. Their beak and feet are a bright yellow.

Fish and water birds are a Steller’s sea eagle’s favorite meal. Their talon is sharp and curvy, the right tool to hunt fish. They do not have any natural predators, but arboreal mammals prey on their eggs.

Steller’s sea eagles live in North-Eastern Europe. They are abundant in Kamchatka, a Russian peninsula. 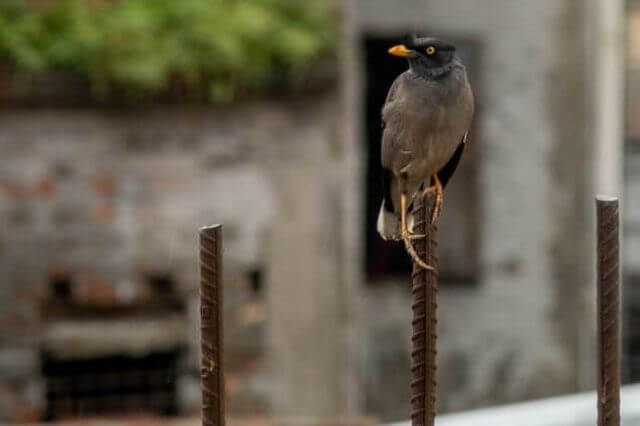 The last member on our list of black birds with yellow beaks are Indian blackbirds.

The beak of an Indian blackbird and its legs are a bright yellow. The ring surrounding their eyes is also shining yellow.

Indian blackbirds find habitat with deciduous vegetation perfect for habitation. They are not shy of humans. But unlike Eurasian blackbirds, they do not live in the urban settlement.

Their diet consists of insects and fruits. Domestic cats prey on Indian blackbirds found around humans.

And there you have it. The next time you forget the name of that cutie bird with a yellow beak and dark plumage, you can come back to this article and get your knowledge refreshed.

Thank you for reading. If you liked this post, here’s a recommendation of a popular read: List of Animals With Feathers