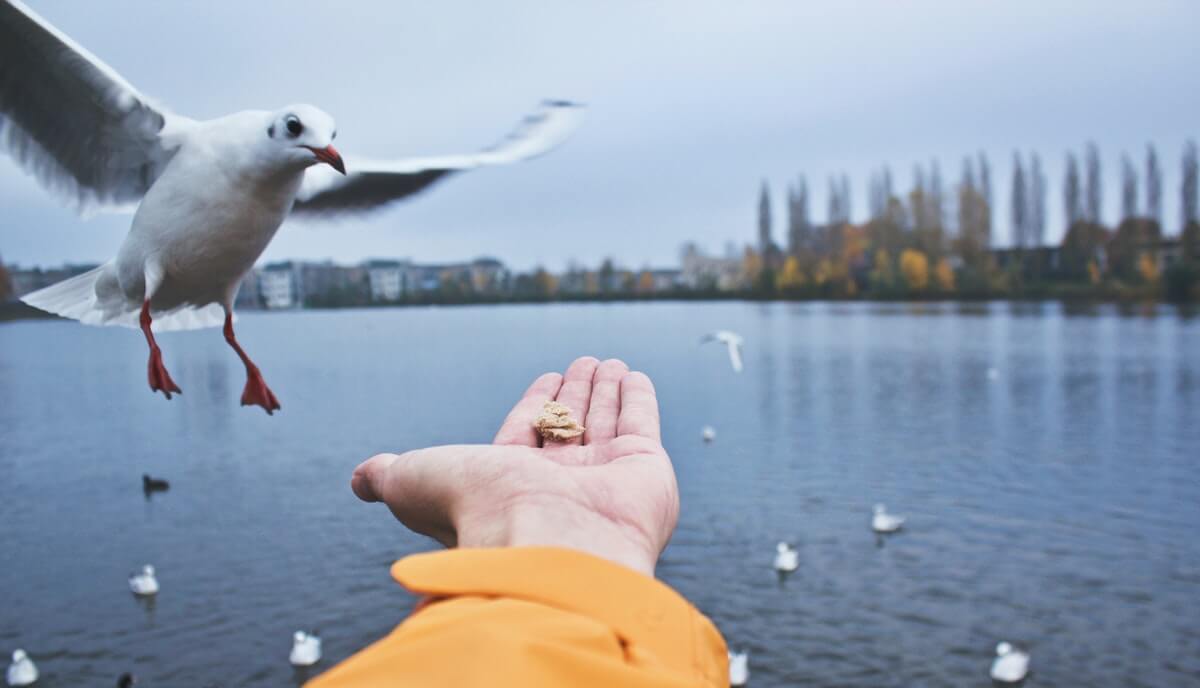 Seagulls are interesting birds. They’ll rifle through bins, steal pet food and sometimes snatch your snack while out in the open air, but while they can be a source of trouble, aggravating passers-by and all the nasty things associated with them, the seagulls can also be awe-inspiring creatures.

Are you considering adopting a seagull as a pet? Read on to discover more about seagulls and if they make or don’t make good pets.

Like most wild animals, the seagulls are protected under the Migratory Bird Treaty Act of 1918 in the US and the EU Birds Directive in the European Union. Keeping the gulls in both US and Europe is illegal, so any decision affecting them, such as keeping them as pets, requires a special statutory conservation agency license for the relevant authorities.

More and more seagulls are moving to urban spaces, adapting and building nests to rear their young ones. With the fish stocks and seafood becoming scarcer, the easy picking from litter and household garbage make urban space favorable and perhaps explains why they are finding it comfortable staying close to humans the closest possible.

With an ever-increasing human and seagull interaction, it is not surprising that you might fight the need to adopt a seagull as a pet. Of course, this could be for various reasons, like helping a bird in need, but not purely as a pet since this is not allowed in many countries.

Seagulls are highly adaptable creatures. The birds are far from picky when choosing where they live, what they eat or drink. They can live anywhere and eat anything they find edible.

Like most animals, the seagulls want warmth, water, and a place where there is plenty of food.

The birds are omnivorous, so they can eat anything that human beings eat. You don’t have to worry about food, though, to prevent the malnourishment of the bird; their favorite food includes aquatic life and carrion. A mix of these once in a while will work for the bird.

Maybe something to note about gulls is that they have weak legs, since, ideally, they were meant for swimming and not walking and scavenging around in public parks. Providing them a pool in your backyard where they can swim can be a great idea.

Seagulls are very, exceptionally very clever creatures. Indeed, various researches have shown that they have exceptional ability to learn, master, and remember and even pass on behaviors.

Pegged on their intelligence, the seagulls can read human cues such that all you will need to do to ward them off is a gaze, and they will respond.

Seagulls Can Remember You

Some of the behaviors that fascinate us about these birds are their acrobatics and noisy squabbles. The squabbles especially can irritate the many, but they are part of a series of communication codes for their interactions and communication.

So how do you communicate with the seagulls? The birds have high learning abilities, so by keeping them as pets, you will develop your communication methods to which they will learn to remember you.

The seagulls are social animals, and their lifestyles are more or less like that of human beings. Sometimes they’ll behave as they can’t stand each other, fighting, disputes, and destroying each other’s eggs. It is more like a social dominance war, but they are highly social creatures.

Adult seagulls fly far from home once in a while and take a few days with fellow seagulls, and while some might get lost and never return, they usually return.

The love and hate for seagulls come in equal measures, but do seagulls really make good pets? While few people have tried keeping seagulls as pets and have succeeded, many have failed. Here is the reason why.

Seagulls are indeed very messy and noisy creatures. They are very aggressive, especially when they are hungry, and make a lot of noise. Don’t be surprised if they rip open your dog and turn over your dust bin scavenging for food.

Seagulls Are Not as Friendly

Seagulls are known for their intrusive behaviors. Snatch food, and tamper with everything on their way. Many people hate the birds because they are ‘thieves,’ but are the birds anything friendlier? Not getting closer to the birds may trigger a response such as biting you, so it takes effort to get the birds close and familiar to you.

Seagulls Are Challenging to Tame

While it is easy to attract the seagulls, maybe by providing an easy-to-get food source, pet lovers will not be able to keep the birds for long. They can get uninterested and find a suitable place elsewhere, making them difficult to keep as pets.

The birds are considered wild animals and are protected by many states and governments. It is illegal to capture them intentionally, disturb them or harm them in any way.

While it is illegal in some countries to keep seagulls as pets, this does not exempt them from care and protection when vulnerable.

To keep the birds around, you will need special authorization from the concerned authorities.

What Else Do I Need to Know About Pet Seagulls?

The seagulls are not only protected in Europe and United States. The law which seeks to protect countries’ migratory birds, protects the birds from selling, transportation, capture, kill or harm the birds in Canada, Russia, Mexico, and Japan.

While few circumstances allow the culling of seagulls, the birds have become adapt to living with human beings, and they gather their food from heavily polluted areas like garbage dumps, landfills, and home garbage bins.

It is not only humans beings who are susceptible to the birds. Uric acid in the bird droppings can cause corrosion and even cause structural damages to buildings.

Lastly, seagulls are known to cause serious security threats to air traffic. They can potentially cause a threat to low flying aircraft so, if you live near airs, this is a factor you should consider before adopting the bird.