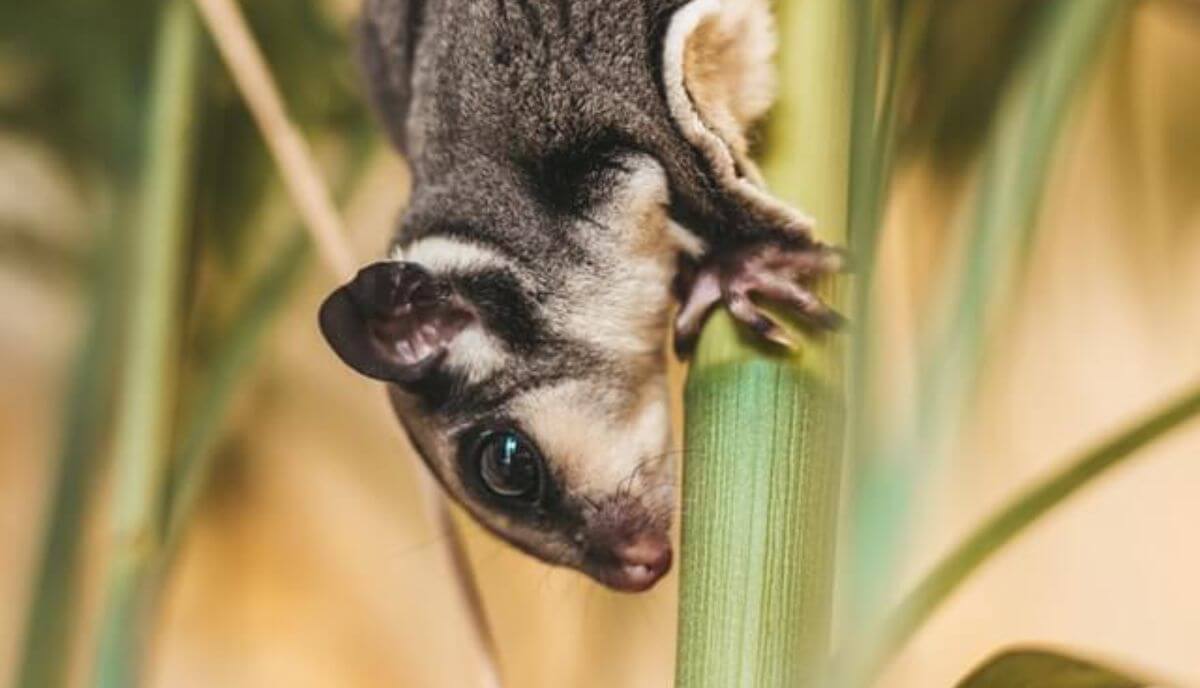 Gliding is generally associated with birds, but did you know that birds are not the only animals that glide? Hundreds of species besides birds have evolved the ability to travel incredible distances through the air.

However, this does not mean they can fly. Actual flight, or powered flight, uses the animal’s muscle power to get it airborne and keep it aloft, as we see when birds flap their wings.

Gliding is passive aerial locomotion that allows the animal to travel from one place to another without wings. There are many animals capable of gliding; some of the most common include sugar gliders, gliding ants, flying fish, and flying geckos, among others.

Here are some of the world’s most exciting gliding animals. 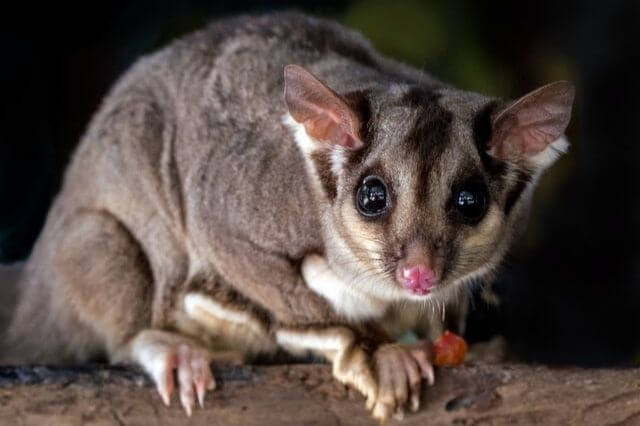 These adorable marsupials are found in the forests of Australia and New Guinea and fall into the category of “wrist-winged gliders.”

This means that they have a flap of skin running from their wrists to their ankles, known as a patagium, which they use to glide.

Suger gliders leap from the trees by extending their limbs like starfish and using their “wings” to soar over 150ft (45m) in the air. They have long, bushy tails which serve as a rudder and help them steer while gliding. 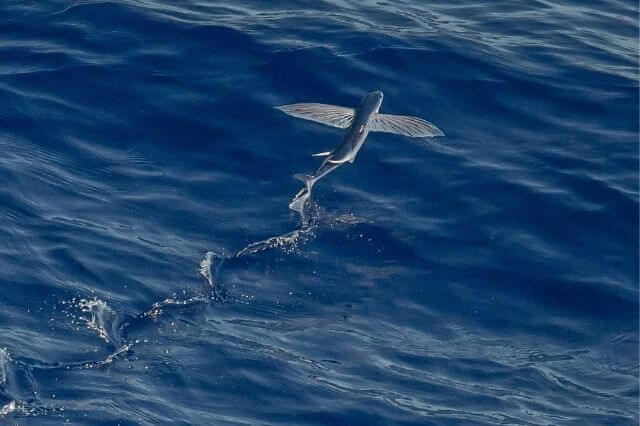 There are over 60 species of flying fish found in warm waters throughout the world, particularly around Barbados, known as “the land of the flying fish.”

Flying fish glide by increasing their speed as much as they can underwater and then propelling themselves past the surface, extending their large fins in the air.

They use this behavior to escape predators, such as swordfish.

According to the National Wildlife Federation, some species of flying fish can reach speeds of over 35mph (56 kph) and glide up to 650 ft (200m) in a single glide!

Flying fish can even continue gliding without fully returning to the water, using their tails to propel them further. These “compound glides” can span an incredible 1300ft (400m)!

These 4-inch (10 cm) frogs are native to Southeast Asia and are found in humid rainforests. They have an unusual method of gliding, more akin to parachuting.

Like Wallace’s flying frogs have webbed feet, but rather than using them to propel themselves through water, they splay their long toes and use them as a kind of parachute to glide up to 50 ft (15m) to the ground.

They also have loose skin flaps on their sides which help them in this process of gliding.

This squirrel species uses a similar mechanism to the sugar glider to glide. It, too, has a patagium, or skin-flap, stretching between its front and hind limbs, its tail to steer.

The Indian giant flying squirrel’s tail is actually longer than its body, measuring up to 20 inches (52cm). 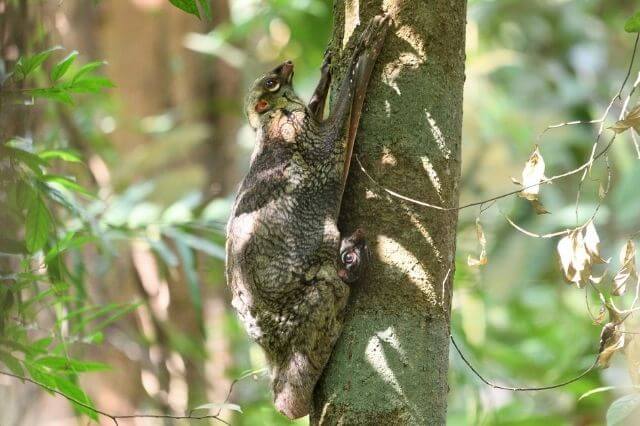 Colugos are gliding animals found in Southeast Asia and are becoming increasingly rare due to habitat destruction. They have almost perfected the art of gliding with their remarkable physical adaptations. 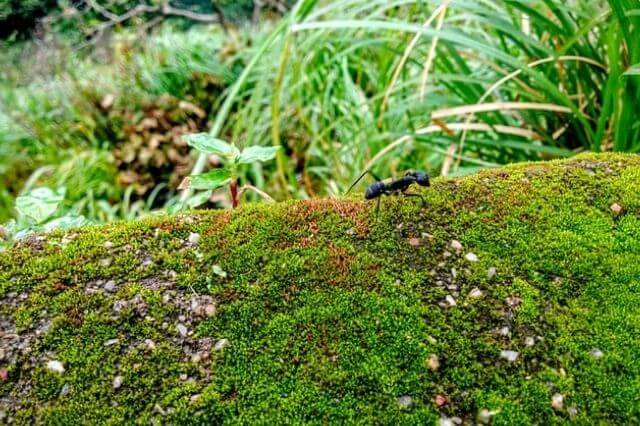 As their name suggests, these are ant species capable of gliding.

There are several species of gliding ant found in rainforest canopies throughout the world. All have a most unusual method of gliding.

When they perceive a threat, gliding ants leap out of trees and free-fall for a few meters. They then flip themselves onto their backs, using their flat heads and bodies to slow their fall, and peer between their legs to see where they are going.

Once they have a target destination, they use their long hind legs to steer themselves towards it. While this might seem ridiculous, it is apparently very efficient for the tens of ant species that do it!

Another Australian native, the greater glider, is the world’s largest gliding marsupial. Like many gliding mammals, these creatures use their patagia to help them glide and exceptionally long tails to help them steer.

Their tails can, in fact, be up to twice as long as their bodies!

Unlike the sugar glider, the greater glider is an “elbow-winged glider,” meaning their patagium extends from ankle to elbow rather than the wrist.

These cat-sized marsupials can glide up to 330 ft (100m) and are able to turn 90 degrees in the air (horizontally, not vertically…anyone can drop).

The common gliding lizard is one of around 40 species of gliding lizard, known as Draco lizards, which are found throughout the forests of Southeast Asia and southern India.

Draco lizards all have a similar gliding mechanism, which is quite different from other gliding animals. They have a membrane that runs down the side of their torso and is controlled by elongated ribs.

In other words, some of the Draco lizard’s ribs can actually extend out to the side, stretching the membrane into a kind of wing.

If they feel threatened, the lizards leap from the trees headfirst, extending their wing flaps once their bodies are parallel to the ground.

You May Also Like: Animals That Eat a Lot

Arachnophobes may take some small comfort in the fact that spiders cannot fly. Unfortunately, this does not stop them from being airborne.

Several spider species are capable of a truly unique and unusual form of gliding, known as ballooning. For one thing, they produce their own gliding material out of gossamer or spider silk.

They do not only rely on air movement but also on electrical currents. Ballooning spiders are highly sensitive to electrical fields, and they use static charges to propel them through the air, clinging onto their silk “kite” as they go.

Fortunately for arachnophobes, the only species of spider capable of doing this are very small…mostly.

Squid may be a surprising addition to this list of animals that glide, but the Japanese flying squid is capable of soaring over 100 ft (30m) in a single glide.

They do this by propelling themselves out of the water and spreading their tentacles and mantle out like wings. It is believed they do this either to escape predators or to save energy during migrations.

Since squid travel in large groups, it is not unusual to see entire shoals of flying squid gliding through the air above the Pacific ocean at once.

Of course, if you’re in the right place at the right time.

The thirteen or so existing species of flying gecko are found in the rainforests of Southeast Asia.

Unlike Draco lizards, these reptiles do not use their ribs to glide. Instead, they have soft membranes, essentially excess skin, on their face, torso, tails, and between their toes.

Flying geckos glide by leaping into the air and using these membranes to control their descent. Some species are capable of gliding up to 200 ft (60m)! 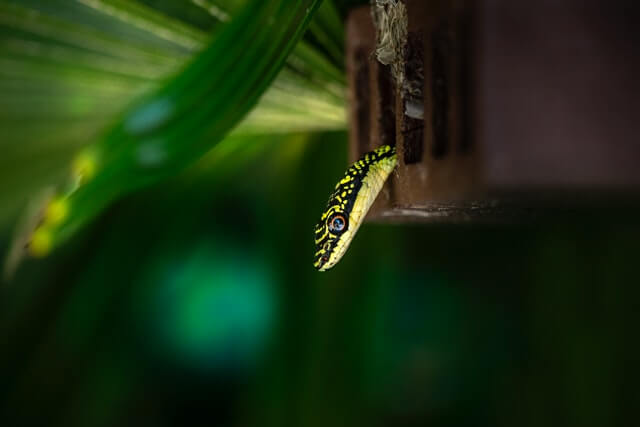 As if flying spiders weren’t enough, apparently snakes can take to the sky too.

Fortunately, of the many species of flying snakes found throughout Southeast Asia, none are considered dangerous to humans.

The largest of all flying snakes, the Moluccan flying snake, can grow to around 47 inches (120cm) long and is found on a number of Indonesian islands.

Flying snakes can glide distances of up to 300 ft (100m) and change direction by curving their bodies. They glide by dropping from trees and immediately flattening their bodies, bending the underside upwards in a c-shape to catch the air.

Surprisingly, flying snakes are better gliders than most mammals, such as flying squirrels or Australian gliders.

Related: Animals That End with E

The Japanese dwarf flying squirrel is a relative of the Beecroft’s flying squirrel, found in Japan. These squirrels are up to 8 inches long, while their tails are about 5.5 inches in length.

Like many other flying squirrels, they are “wrist-winged gliders” and glide much the same way as their cousins.

There is nothing particularly unusual about the Japanese dwarf flying squirrel besides the fact that they are undeniably, ridiculously cute.

The northern glider is close to both the sugar glider and the greater glider and is endemic to Papua New Guinea.

These tiny gliding marsupials barely weigh 9 ounces (250g) and are critically endangered, their main threats being deforestation and hunting.

Like their relatives, northern gliders use their large wing flaps to glide from branch to branch and can travel tens or even hundreds of feet.

Halfbeaks are actually a group of around 70 distinct fish species, so-named because of their unusual jaws. The lower jaws of halfbeaks are longer than their upper jaws, giving them a “half-jawed” or “half-beaked” appearance.

Halfbeaks are found in warm waters all over the world. Some species of halfbeak are capable of gliding, much like other flying fish.

They use their fins to propel themselves out of the water and through the air.

However, their fins are relatively small, making them somewhat inefficient gliders, with a maximum gliding distance of only around 10 ft (3m). 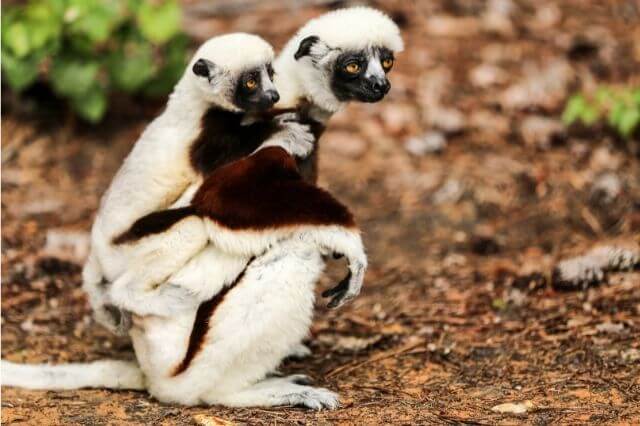 Speaking of animals that glide, sifakas are a must mention.

The sifaka named after its “shi-fak” alarm call, is a lemur species found only in Madagascar.

There is some controversy around whether these endangered primates can really glide or whether they merely leap.

Either way, sifakas are capable of traveling 33 ft (10m) in a single bound, and it is widely believed that they use flaps of skin under their arms to extend their time airborne.

These, along with the saw-tailed lizard, are one of two species of African gliding lizard.

Neon blue-tailed tree lizards do not, at first sight, have any obvious gliding adaptations besides flat bodies and webbed feet, yet these animals can glide some 100 ft (30m) through the air.

This is primarily due to their extremely light bones.

Like many birds, the bones of the eastern neon blue-tailed tree lizard (try saying that three times fast) are porous, with air pockets making them very light.

The feathertail glider is the world’s smallest gliding animal, weighing less than half an ounce (12g).

These minute marsupials are found only in Australia and are relatives of the sugar glider. Feathertail gliders have unusual tails covered in stiff, feather-like hairs.

Feathertail gliders use their tails, along with their patagia, to glide up to 100 ft (28m) between trees.

Like greater gliders, feathertail gliders are “elbow-winged gliders,” with patagia extending between their elbows and ankles.

The long-eared flying mouse is not a mouse, though it does have relatively long ears. They are actually a type of flying squirrel (which are not actually squirrels…who named these animals??).

Long-eared flying mice are found throughout central Africa and only weigh around an ounce (30g).

Their gliding mechanism is similar to other flying squirrels: they use their patagia, or wing-flaps, to glide and their tails to steer and brake.

The last member on our list of animals that glide is the Beecroft’s flying squirrel. This is a species of scaly-tailed squirrel (charming name) found throughout central Africa.

Unsurprisingly, scaly-tailed squirrels are so-called because of the scales that grow on their tails. The Beecroft’s flying squirrel, like many mammalian gliders, has a patagium between its front and hind limbs and a sturdy tail for steering.

This flying squirrel is covered in grey and white or brown fur, apart from the underside of its wing membrane, which is almost totally bare.

Gliding is an effective way of aerial travel from one place to another (usually from tree to tree). Gliding animals typically need some form of propulsion or to start from a raised location, whereas true flyers do not.

It is believed that gliding evolved before the actual flight, which is why we see gliding across such an extensive range of species. In contrast, true flight evolved only four times in history: in now extinct pterosaurs, birds, bats, and insects.

If you liked this type of listicle post, here’s a recommendation of another popular read: List of Animals That Waddle