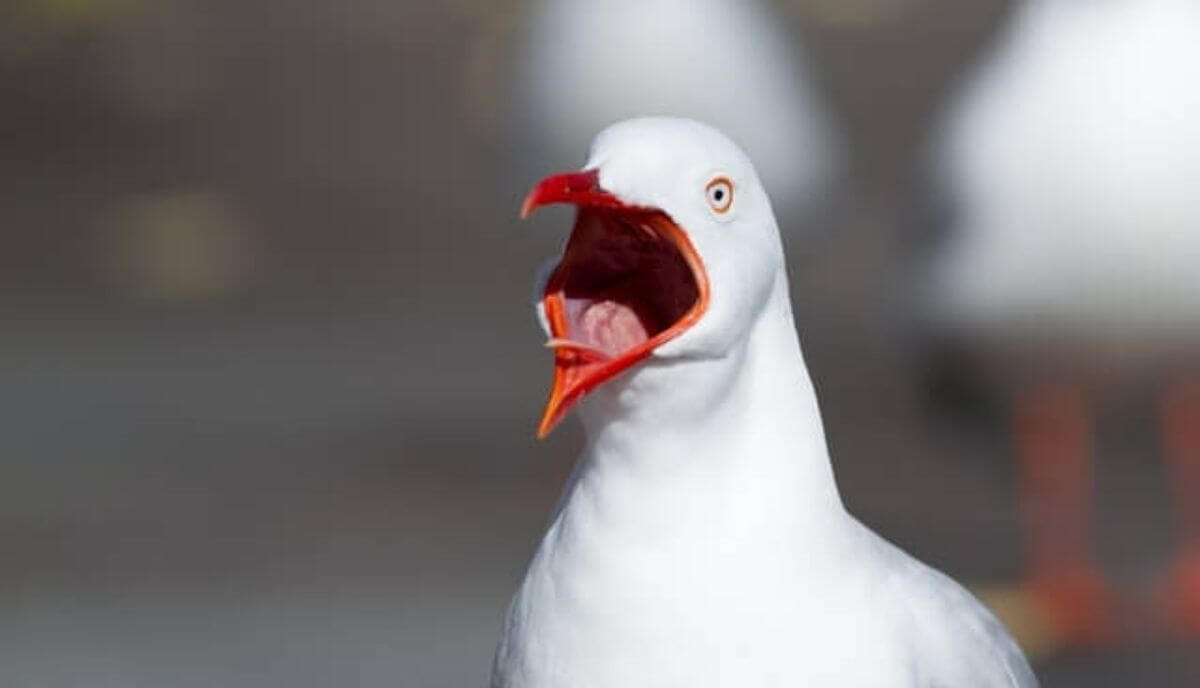 We all know that the sound of an animal is enough to make you jump and be startled. The thing is, we spend much time hearing the same sounds repeatedly, and we start to tune them out without even realizing it.

But have you ever heard wild animals that scream, for example, koalas? What about the seal or the gibbon ape?

This article will let you know which are the top 13 animals with the most intriguing screams out there!

If you are curious to learn more about these screaming animals, read on!

Foxes are one species that have the weirdest screams of all animals. On top of the list is the red fox species which usually “screams” to attract its future partners.

Besides that, red foxes use growlings, barkings, and yelling sounds to communicate with each other.

These sneaky animals are very loud, and their calls can primarily be heard at night since they are nocturnal animals.

If sometimes, you find yourself walking in a forest hiking, and you suddenly hear horrific sounds like a woman yelling for help with a shrieking note to it.

You do not have to fret!

If the forest has foxes, it is likely one calling for its partner. However, if there are no foxes in the vicinity – you are about to join a horror movie!

Another exciting representative of the noisy animals, the gibbon ape, tends to scream aloud when protecting its territory. They are very territorial animals and usually make a loud whoop like cry when they want to chase someone away.

Being extremely loud, gibbon apes can frighten anyone unfamiliar with the animal’s cry. That goes especially for tourists who most likely haven’t heard this creature yelling.

It is pretty hard when it comes to how we can compare it, and maybe the closest comparison would be that of cheering sports fans.

Be it football or volleyball; it is similar to any of them. If you hear a group of Gibbons screaming “Woop Woop Woow” sounds, you may mix them for a cheering group.

Peacocks are beautiful animals, and they have this colorful and pleasant look at feathers and are generally impressive. But did you know that they make one of the weirdest screams?

These birds are types of animals that can scream like a child or more like a furious one.

Their noises are also sometimes similar to a cat meowing. This animal makes high-pitched and honking sounds. Their calls often announce their majestic presence once they enter their domain (habitat).

Besides that, peacocks make such noises when communicating or trying to impress the females.

You can also hear their scream at night if they feel endangered. By yelling as much as it can, it informs the presence of a threat and warns the other animals.

Speaking of screaming animals, the penguin is a must mention.

These black and white Antarctic creatures make unique growling and honking screams. Of course, it all depends on the sub-specie of the penguin, but most of them produce sounds that resemble car honking.

Interestingly, penguins’ noise is different from that of other birds because these creatures scream by making high-pitched braying sounds using a unique structure in their throats.

Most commonly, you can hear these birds’ noises when they communicate or try to call for their mate or youngling.

Another remarkable fact about the screams they make is that they can identify each other by it as they are different and can be individually identifiable. This way, even among the whole colony, a family can find each other.

Seals are one of the funniest screaming animals on our list. Besides being lovely and cute, this animal can give you the freaks if you hear them for the first time.

Thinking about it, this animal screams like a man and, on top of that, a grown one!

So, if you get caught by surprise, you will believe that someone is charging at you screaming “aaaaaaaargh,” like sounds which you would usually hear in a bar fight!

Besides this noise, seals tend to make much grunting, growls, roars, barks, and even honks-like sounds while communicating.

Mating and fighting sounds are also not uncommonly heard. Interestingly enough, they make different sounds on the surface, and in the water, the sound frequency also changes!

Parrots are not the only bird that can try to mimic human speech. One of the animals that can also do that is the musk duck found in Australia.

This extraordinary animal can closely copy human voices or sounds and try to imitate them.

Sometimes they do well and can pronounce whole phrases, but often it is misspelled and can even sound creepy, especially if you hear the bird scream at night!

Besides copying what they hear, musk ducks tend to use a variety of other sounds. For example, when they call for their duckling, female musk ducks use a soft, calm, and inviting shrill call to their young ones.

On the other hand, if they are scared or feel danger, these ducks make quacking sounds like you have heard on TV or croak when they are surprised.

Koalas, ahh, this cute and fluffy animal we all love. They are one of the creatures with the weirdest screams in the wild.

Besides living their leisurely lives, they tend to make various sounds, such as squeaks, yips, and screams.

Making these odd sounds is something they do purposely. When looking for their mommies, the young ones will produce yip and squeak calls (which sounds pretty adorable).

Both males and females make a screaming-like loud calls during mating season, which is enough to frighten someone, especially if they are not expecting it.

Besides these screaming noises, koalas make a bunch of snarling and yawning while communicating with each other.

Probably the animal you least expected to see on our list is a dog. But, do not get surprised by it!

These adorable-looking dogs are one of the weirdest barking and screaming animals you will ever meet!

An angry pug screams loud enough to make you think your toddler did something and is crying about it. The noises they make are impersonating an angry child almost 1:1.

When this small dog gets mad, it will surprise you with various noises and shrieks that it can produce.

Besides that, like any other dogs, you can expect them to bark and growl while communicating with other dogs or just expressing themselves.

We cannot miss the goat if we are talking about screaming animals! This animal is one of the weirdest ones, and trust us; it is not only bee and mee sounds that they make!

Surprisingly enough, the goats can produce various noises depending on their sub-specie, mood, and situation. For example, the animals can scream anything from “aaaaaaaah” to sounds like an old man grunting, “Whuuut whuuut.”

There are various reasons why goats yell. However, most commonly, these anxious animals will produce scream alike sounds when scared.

As you know, the typical goat’s scream is bleat. The animal uses this one to recognize and find its mate in the herd. By using it, mothers can see their children, and partners can see their mates easily!

When it comes to when they do it – there is no rule. Goats are animals that scream equality loud both day and night!

This creature is not favored by many mainly due to its outer appearance. But it is still one of the animals with the best local cords among the frog species!

Bullfrogs, like every other frog, are animals that scream at night.

The noise that bullfrogs make is incredibly unpleasant, and it is most often connected to that of a crying baby. It depends on how you accept it, but it can be either angelic or horrifying, especially when you hear it on a night’s walk.

These amphibians will most commonly scream when they are under stress.

However, bullfrogs also use these cries to communicate with each other. If they are not making this scream, they will most commonly use chirping or rasping sounds.

The funniest one, in our opinion, on this list is that of the marmot. This adorable animal is similar to the squirrels, but the sounds it produces when screaming, are way too different from squirrels.

If you hear a marmot in a while, you will think that you hear a small girl scream. The high-pitched noises they produce are so high that they will stun you in awe or make you laugh.

Interestingly enough, they produce this type of sound to either sound an alarm for their kind of an incoming intruder, for some danger, or to find their mates.

As you may know, they are hibernating animals, so coming out of their winter sleep, they need to find their mates, and what’s better than screaming high enough to be heard everywhere!

Squirrels, these fluffy creatures, can make quite the noisy sounds in the wild. You will not be surprised to hear that their grunting, like screeching noises, is something that can often be heard even in your backyard!

The animal tends to make these noises mainly for protection.

Depending on the species, they can vary in tone and manner, but they often use them to sound the alarm for intruders.

For example, if they spot anything threatening them from the tree branches, they will make these bird-like noises to warn the other animals.

Interestingly, the squirrel’s scream can be close to mixing with that of a bird’s call.

Parrots are probably the most well-known animal that can scream out loud. They are also one of the most extraordinary mimicking sound creatures who can produce loud noises imitating anything from human speech to a loud car or other noises.

There are many reasons why this bird may make different sounds, but all of them are based on its emotional condition.

For example, if a parrot is sad – it will cry, making this tragic but loud scream. When they are angry, the birds growl or make clicking noises. Lastly, they make whistling and chirp noises while communicating when they are happy.

These animals can make any of the cries from above during various time frames. It may be in the middle of the night to frighten you or in the morning when you least expect it.

There are many animals that scream – some of the most common ones include goats, gibbon apes, seals, marmots, and squirrels. Besides making scream-alike noises, animals produce various sound-based signals to communicate with each other or express their feelings.

If you liked this type of article, here’s our recommendation of another popular read: Quietest Animals