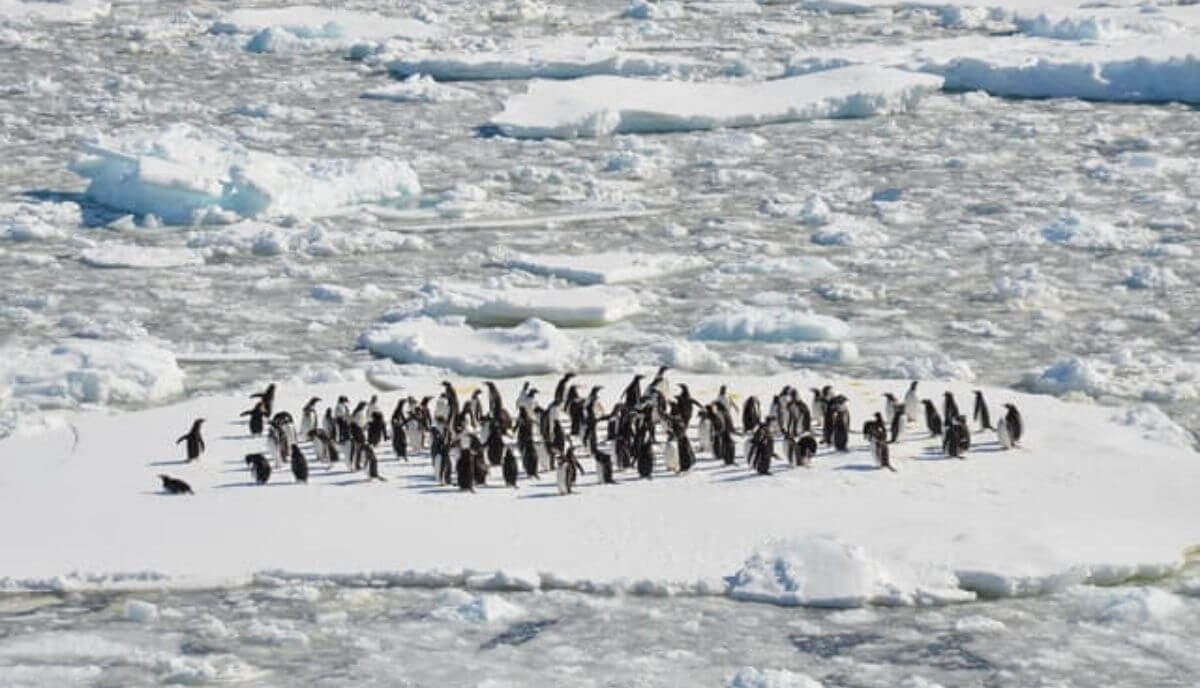 We all know how to get winter off on the right foot – we wear clothes that give us comfort and warmth. But what about the winter animals?

We know that some animals migrate to warmer places while others hibernate. Others stay put and adapt to the colder weather by having various adaptations.

For animal lovers, snow and cold weather is the perfect season to observe winter animals and see what they do to keep themselves warm.

Today, we are going to talk about animals that live in some of the coldest regions on the planet earth. 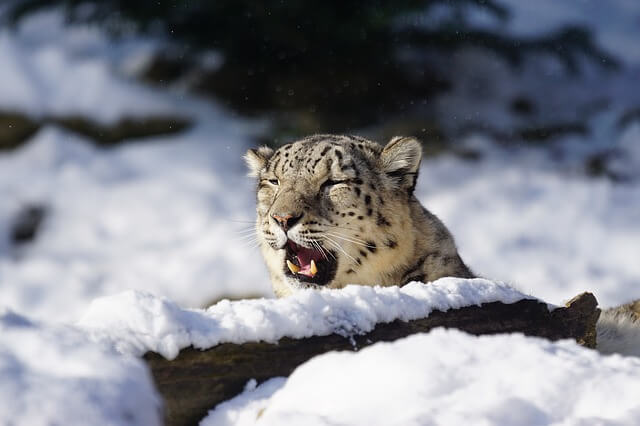 The beautiful snow leopard’s environment doesn’t give way to brighter days with the approaching spring.

That’s because the mountains of Central Asia where it lives remain cold and inhospitable even in the summer months.

Nonetheless, the snow leopard can survive the harshest winters with its thick fur and enlarged nasal cavities. With these enlarged nostrils, the cat can breathe easily in high altitudes.

Their long thick tail is useful for wrapping around themselves to keep warm.

Related: Animals That Have Fur 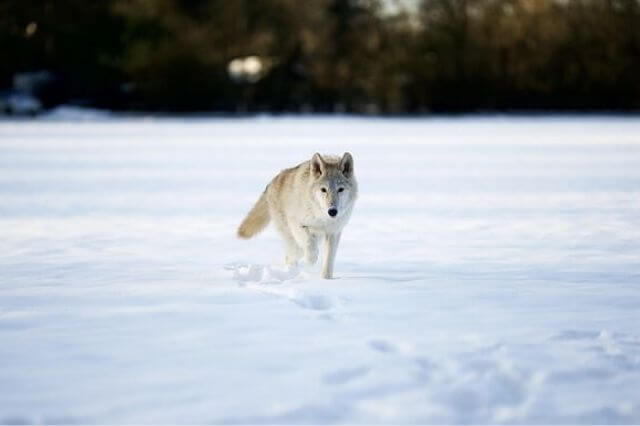 The Arctic wolf is no stranger to freezing conditions, and where it lives, temperatures can plummet to -50°F. It is well adapted to survive in icy landscapes, and its 2 layers of fur provide insulation and waterproofing.

To help reduce heat loss, the arctic wolf has shorter legs, nose, and ears than other gray wolf subspecies.

Its fluffy tail also comes in handy in cold environments. When curled up, the wolf uses its tail to wrap around itself. 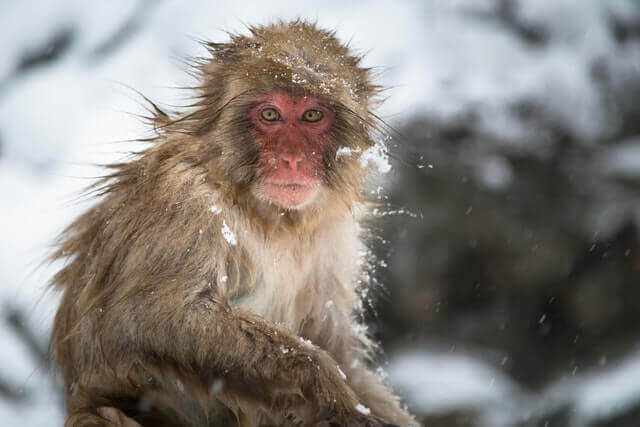 The fascinating Japanese Macaques monkeys are the world’s most northern-living primates.

They have to contend with living in icy, snowy conditions, but they have an arsenal of resources that give them an edge.

The monkeys form groups and huddle together to share body heat and keep warm. They also sport a longer, thicker winter coat to fight the cold.

These intrepid snow monkeys have adapted to Japan’s freezing winters by also making use of the natural hot springs in the Jigokudani Yaen-Koen National Park. 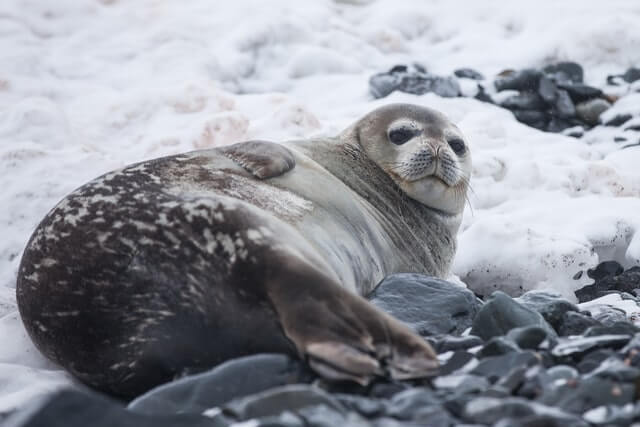 Harp seals are found cavorting around in the freezing waters of the North Atlantic and Arctic Oceans. Of course, they’re hunting for their favorite fishy meal – crustaceans and fish.

The babies are born on floating ice. The coat is white at birth, and the baby seal is referred to as a ‘Whitecoat’. As they mature, the coat darkens.

Those mature seals also have a thick blubber layer that provides insulation and a source of energy that is used when food is scarce.

Another behavioral habit of theirs to reduce heat loss during freezing winters is to keep their fore flippers held against their bodies. By pressing flippers together, seals cover exposed body areas and conserve heat. 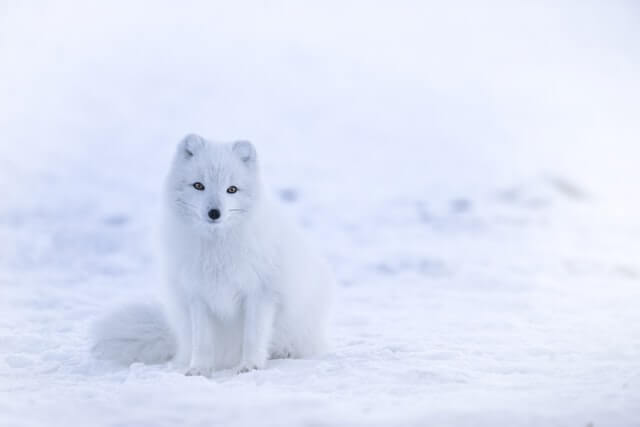 Possessing some super senses gives some animals like the Arctic fox a head start when it comes to hunting prey during the big freeze.

They have a number of adaptations that allow them to survive in freezingly cold regions.

Their legs, ears, and muzzle are short which conserves heat. The outstanding feature of the fox is its thick fur which helps the fox to maintain a consistent body temperature.

The Arctic fox also has thick fur on its paws, allowing the fox to walk on ice and snow. 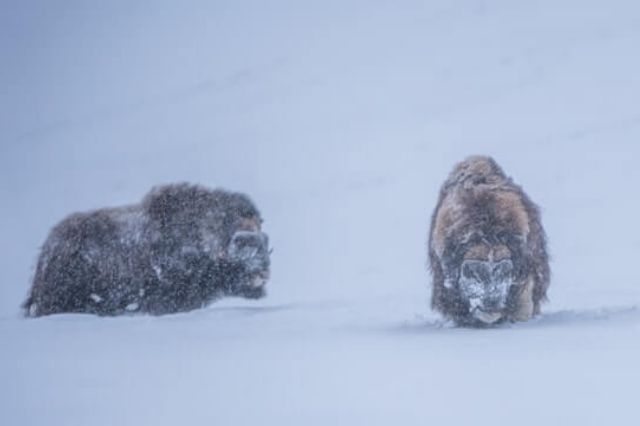 The massive musk oxen of the Arctic tundra are often found on open, unsheltered tundra, where they have to cope with freezing galeforce winds and temperatures of –40° in the winter.

One thing that helps them is their extraordinary 2-layered coat of fur.

In fact, apart from his nostrils and lips, every part of the muskox is covered in fur. It is this fur that becomes its main defense mechanism against freezing conditions.

The coat is extremely thick and long, insulating him and making sure that no heat escapes. Huddling together is another tactic that the musk ox has up its sleeve to keep warm. 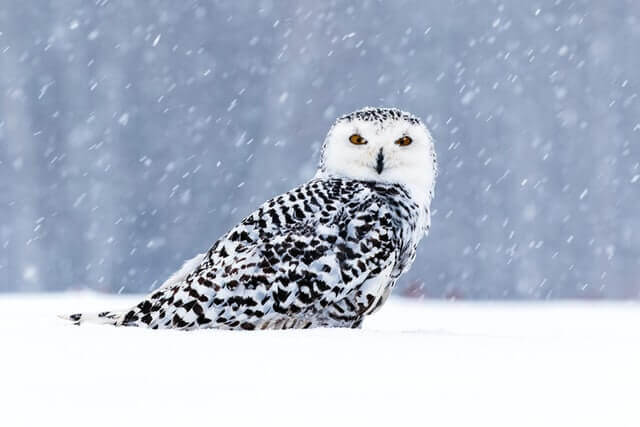 Known also as the Arctic Owl, the Snowy Owl is a distinctive bird species with its white plumage, contrasting yellow eyes, and black beak and talons.

The harsh cold, dry tundra habitat is home to these cute owls. It is extremely well adapted to surviving in the cold habitat.

Its plumage is thick, making it a particularly heavy owl. They’re stoutly built, which helps them maintain their body heat.

It has feathers covering its feet and legs to insulate it from the cold. Also, to survive in this harsh wintry environment, snowy owls use up little energy, keeping flights short and low. 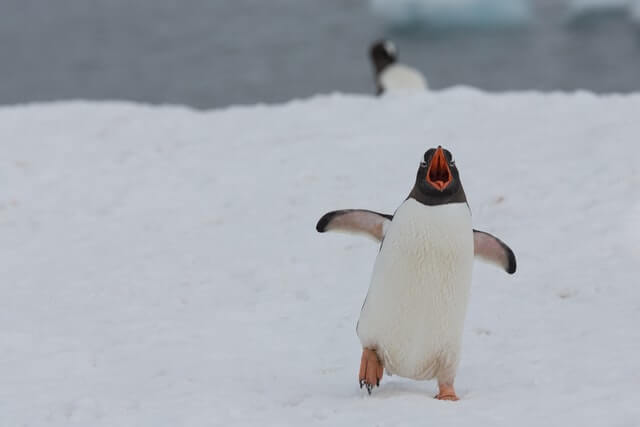 There are four species of penguins that live in Antarctica. It’s the Gentoos, Adélies. Chinstraps, and the better known Emperors.

How do these animals with flippers survive in the harshest and iciest climates on earth? They minimize heat loss by keeping the outer surface of their thick plumage below the air’s temperature.

Luckily they also have blubber under the skin. They also have a weird activity – rocking backward on their heels so as to reduce contact with the snow.

Also, to warm up, penguins huddle together, rotating around so that the same penguins don’t remain on the outside of the group.

You could say that this ‘penguin huddle’ is key to this amazing bird’s ability to conserve body heat and survive this utterly inhospitable environment. 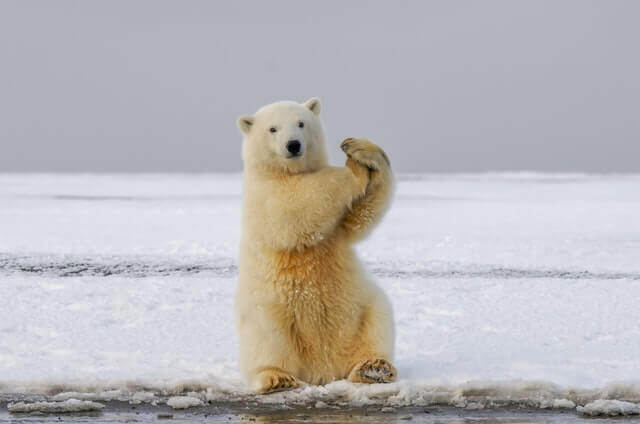 Speaking of winter animals, polar bears are for sure some of the first creatures that come to our minds. These powerful bears live above the northern tree line in the Arctic.

Polar bears are built for conditions where temperatures plummet to -50 degree F. They have two layers of fur that prevents most of their heat loss.

In combination with thick layers of fat, they are not concerned about the cold despite living in some of the coldest parts of the world. In fact, polar bears are known to overheat when running too much.

Their white fur acts as camouflage on the snow. Polar bears’ paws are as large as dinner plates which helps them walk on thin ice without falling through.

Papillae on their footpads grip the ice to prevent them from slipping, while fur between their toes helps with warmth. 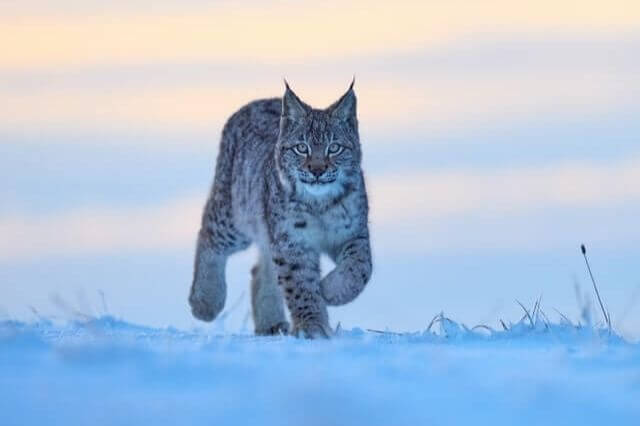 Another winter animal that inhabits the dense cold forests of Canada and Alaska is the Lynx. They tend to hunt in high altitudes and areas of deep snow to avoid predators.

Many animals hibernate during winter, but the Canada Lynx has specially adapted to endure snowy conditions and icy weather.

It gets a thick winter coat and has furry padded paws which resemble snowshoes. They are nocturnal animals and have exceptional night vision.

Their ultra-sensitive whiskers, quick reflexes, and acute hearing also help them with their night hunting. They also have a large gap between the first and second toes of their feet which helps them maneuver through deep snow. 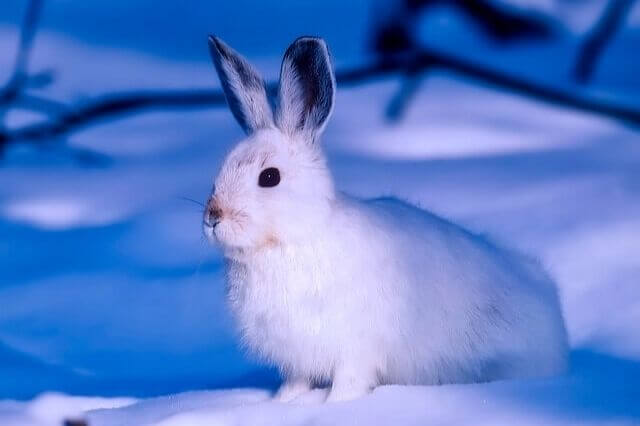 The Arctic Hare has adapted well to living successfully in the harsh North American tundra. The lovely white fur is thick and insulating.

Its fur also acts as camouflage in the winter, giving the hare good protection from predators. Apart from that, they also have a low metabolic rate which allows them to conserve energy.

The Arctic hare can run at a rate with long periods of resting and shorter bouts of foraging, which conserves energy, allowing him to survive on a low food intake.

Their paws are thickly padded with fur to provide grip on slippery surfaces. The snowy-looking hare will cleverly burrow beneath the snow to escape the bitingly icy wind. 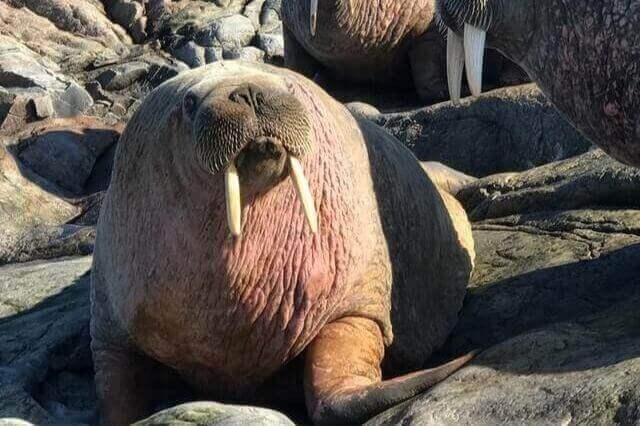 In fact, it spends most of its time right in the water. These huge sea creatures winter in the central and south Bering Sea.

To be better suited to living in this freezing environment, the Pacific Walrus has its adaptations.

Like your regular seal, the walrus keeps warm in the icy Arctic waters with a thick layer of blubber. The blubber can be several inches thick and keeps its vital organs warm.

Its blood vessels constrict, and blood is moved away from the skin and towards its main organs, where heat can’t escape. When the walrus has been underwater in freezing water for a time, its skin appears white because of this very reason.

They use their elephant-like tusks to break the ice for breathing holes.