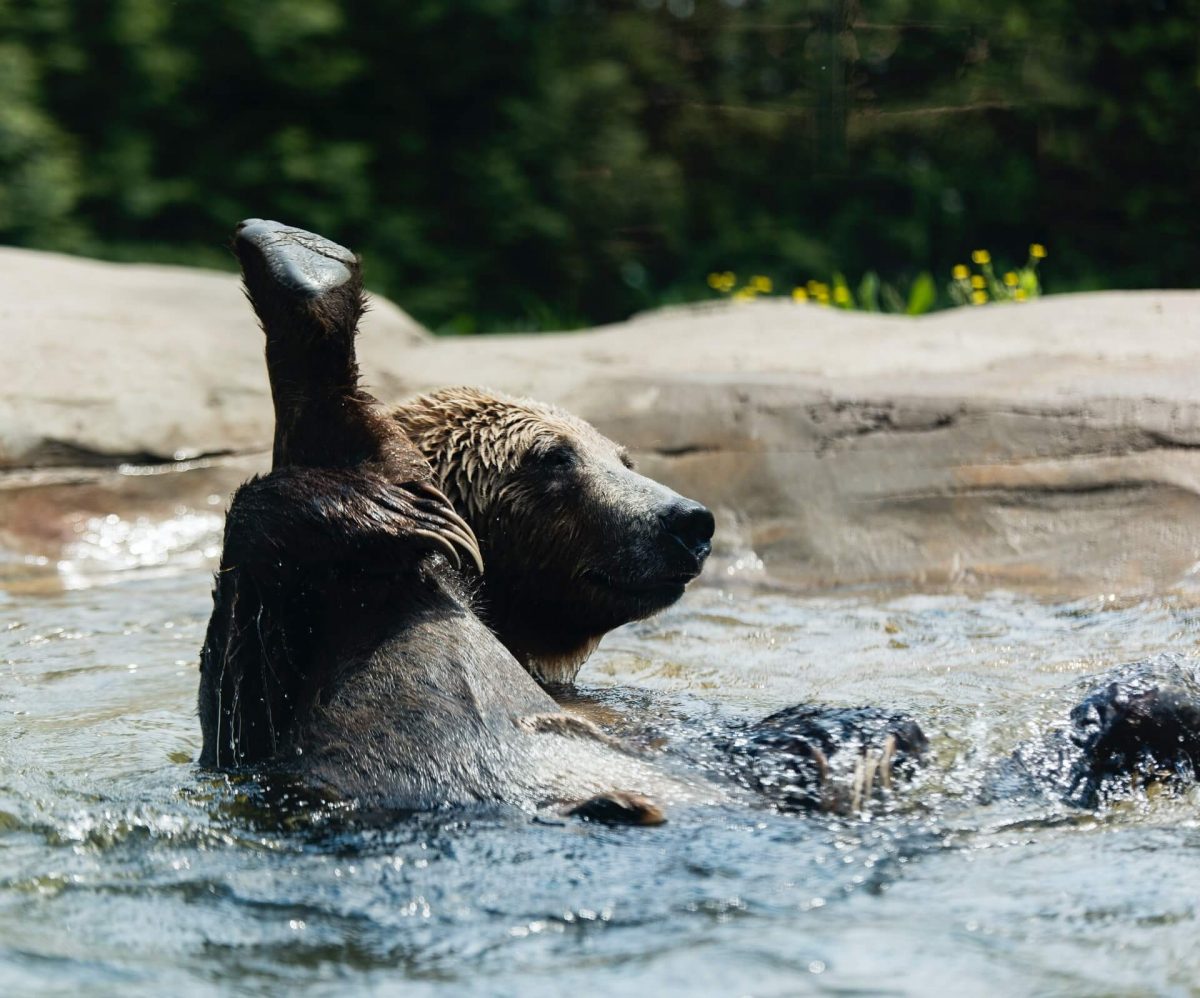 We all know bears are intelligent animals that can adapt to different environments and situations. But sometimes, their behavior can confuse the bystanders.

Why bears wave is something that you have to ask yourself when you see a bear acting like a human. Bears waving is not a natural behavior for bears, and they don’t use it to communicate with each other.

So, why do bears wave?

There are a few reasons why bears wave. It’s most likely they are imitating humans in order to get food. Bears also wave, as they were taught to do so by their trainers, or they are trying to warn you to stay back.

There are plenty of videos online showing bears standing up and waving. In this article, we are going to explore the top three reasons why bears are waving.

Why do bears wave?

We’ll go over each of the potential causes for this uncommon bear behavior in more depth.

As we already mentioned, bears are intelligent, and they can often be seen imitating the behaviors of humans and other animals. In some areas of the world, where bears and humans live in close proximity, encounters are common.

Campers in the wild would often cross their paths with wild bears. In most cases, they can be seen from a distance, but sometimes the encounter is close enough to be captured on camera.

Some of these videos show bears waving back at the campers. Bears are probably not trying to say hi, but just imitating what the campers were doing.

Since bears would often take any leftover food from the campers, they could associate imitations with food. And could do it again next time they see a bunch of scared campers.

This is more common in captivity, where zoo visitors are often seen feeding the animals. Even with the clearly visible sign “don’t feed the animals.” Zoo bears will quickly learn that they get more food if they do something that visitors like.

No matter how cute and fluffy they look, bears are dangerous animals. And if you encounter them in the wild, we suggest you slowly walk away from them to a safe distance.

Bear standing and waving might look friendly, but this could be a warning sign. Bears are mostly afraid of humans and would not attack unless they feel threatened. Bear on their back legs standing straight could be trying to appear as big as possible to scare you off and get you out of its path.

Bear waving should never be taken as an invitation to come in closer. Especially if you see there are small cubs around. Be sure the mother would protect her young at all costs.

Modern zoos are trying to make the lives of their animals as nice as possible. Ones that take care of their residents would often perform health and mental checks.

To make sure animals are staying healthy and bonding with the zookeepers, they would try to teach the bear some tricks.

In contrast to the animals in the circus, these tricks are being learned without forcing and punishing the animals.

Why do bears stand up?

You would often see in the movies that bear stand up just before charging and attacking. More often than not, this behavior is a sign of curiosity and not aggression.

This doesn’t mean that if you see a big grizzly bear standing up in front of you that you should take selfies with it. Bear is a dangerous animal and should be treated so.

To get more information, bears would stand on their hind legs to be able to catch more smells or hear better what is going on in front of them.

Bears would stand up when they notice something interesting, but also when they feel threatened. Cubs would do this even more than adult bears to be able to see over the high grass.

Be careful if you notice a bear grunting, barking, or making woofing sounds, making eye contact, and holding its head low with ears laid back. These could indicate that bear is ready to attack and defend itself.

Why do bears walk upright?

The usual way of walking for bears is on all four, but most bears are capable of standing and walking on their hind legs.

As we already covered in this article, there are many videos showing bears standing on their back legs and behaving out of the ordinary. There was a recent case of a bipedal bear that was seen many times roaming around on two feet. It was later found that this bear was hit by a car and injured. The poor animal had to adapt to the new circumstances and continued living and walking upright.

Since this is not a normal occurrence, you would rarely see bears covering long distances on hind legs.

However, if they do get upright, bears are probably trying to get more information about their surroundings. Trying to find something to eat. Or trying to be more intimidating.

This is the case for bears in the wild. Yet, circus-trained bears are walking on their hind legs as part of the performance.

How do bears show affection?

Bears are wild animals. In their natural habitat, they are more concerned about feeding, reproduction, and survival than making friends.

They are communicating with each other by leaving scents and markings on the trees. Nonetheless, there are many recordings where you would see a mama bear displaying a lot of affection towards her cubs. Bears are extremely protective and caring for their offspring.

Bear shows affection for her cubs in a similar way that humans do. By hugging and kissing, or by touching their muzzle, body, and paws.

Bears in captivity can also develop a connection with their keepers. However, most people would argue that it is not a true “friendship” and that bears can’t be fully tamed. Considering that incidents between bears and their trainers are not uncommon.

Bears are very intelligent, and they can learn to associate the keeper with food, which makes this person their favorite.

Which bear is the friendliest?

We often depict bears as friendly, fluffy, careless animals that love to eat and sleep. There are a lot of cartoon and movie characters that are portrayed like that.

However, in real life, their first instinct is not to make friends, especially not with humans. In this regard, we can only say which species are the least aggressive and not likely to attack:

When bears wave at you, they are not trying to send you regards. Bear waving is associated with several possible behaviors. Imitating human behavior in order to get food. Warning sign, as bears are usually afraid of humans. Or learned trick.

Thank you for reading. If you enjoy posts about bears, here’s another popular article: Bear Teeth Explained