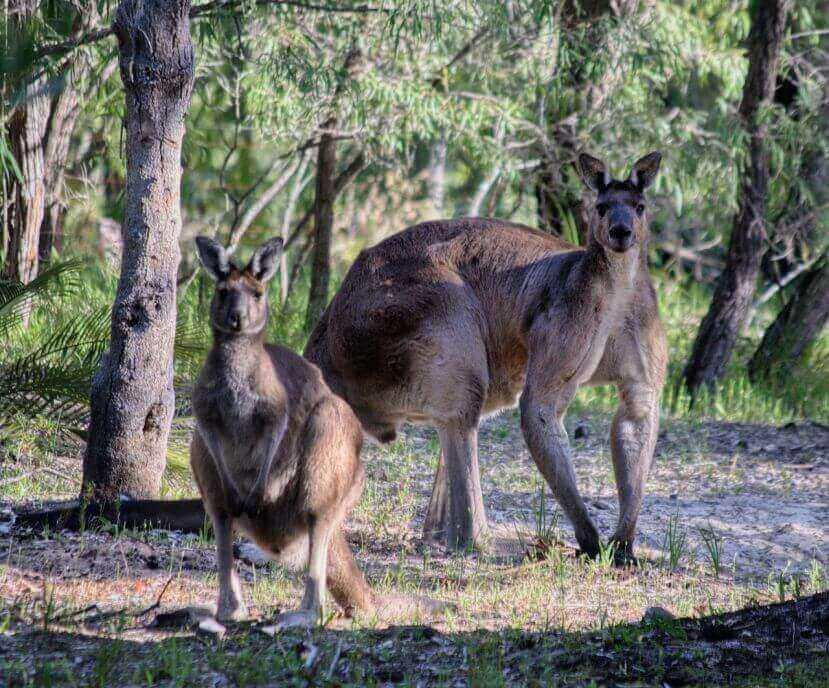 Kangaroos are pretty unique animals. They’re marsupials, meaning they carry their young in a pouch and have a specialized fourth toe to help them hop quickly over long distances. Kangaroos are also covered in thick fur that insulates them against extreme temperatures.

But have you ever wondered why kangaroos are so buff?

The fact that kangaroos have muscular bodies is due to several factors. Male kangaroos with bigger muscles appeal more to females than those skinnier individuals. Kangaroos are also the largest hopping animals, giving them powerful, muscular legs. In addition, the genetic propensity for muscle development in kangaroos is also a significant factor. Pure muscle accounts for 50% of their overall weight.

You may have seen a few kangaroos on the side of the road or at your local zoo. They’re usually just standing around, and they don’t look very intimidating. But as it turns out, kangaroos are actually pretty buff animals! Especially red kangaroos.

If you want to know more about this strange creature from Australia, read on for some facts about these marsupials.

Why are kangaroos so buff?

Many of us are envious of kangaroos’ muscular bodies. Like a jacked and powerful boxer who dominates his division, a buff kangaroo also rules its habitat by being the strongest and most muscular within the group.

But why are kangaroos so muscular, and how do kangaroos get so buff in the first place? Is it all-natural, or what lies behind their athletic physiques?

There are three main reasons behind such phenomenon, which we are going to cover in more detail each.

The largest species from the family is the red kangaroo, as well as the largest marsupial on the planet. Two forelimbs and two hind legs combined with a muscular tail allow these animals to move in various ways.

These super aerobic animals have large hearts as well as high levels of muscle mitochondria, which are essential for such a muscular body. Similar to animals like horses, dogs, and antelope.

The main difference in aerobic potential between animals is primarily associated with the total amount of mitochondria in skeletal muscle and in organs.

The red kangaroo has 50% muscle mass of the total body mass. This fact is even more fascinating, knowing that most of those muscles are situated around the hind legs and pelvis.

Further studies have shown that more ‘athletic’ species may have three times the greater oxidative capacity of muscles. In comparison to more inactive animals of similar body mass.

The same results are seen in humans.

But when it comes down to it, there’s the main key factor that makes this animal stand out from others: Kangaroos use bipedal hopping for locomotion instead of quadrupedal walking as most mammals do.

Have you ever looked at a jacked kangaroo and wondered why they have such big and muscular legs?

First of all, kangaroos are the largest animal that hops as the primary means of travel. Their legs are powerful because of their flexible tendons. Specialized for storing energy while jumping.

Compare this to compression springs. By pressing the weight down to the spring as much as possible, it condenses, storing the force up until it is released.

Similarly to that, whenever a kangaroo’s feet touch the ground, its tendons squeeze to accumulate energy for the kangaroo to rebound.

Kangaroo hopping is very different from the way people jump, which requires a lot of energy and effort. In fact, kangaroos spend almost no energy on breathing.

Also, their tail plays an important role, serving as a balancing tool, launching the kangaroo into each leap. Strong muscles are needed to support their large, heavy bodies.

The combination of muscles, large feet, and its tail allow kangaroos to jump up to 25 feet in one leap. And also travel as fast as 43 mph over short distances.

In the animal kingdom, different animal species use different tricks and strategies to attract females.

Buff kangaroos have a unique way of exposing themselves to females. They would “box” with other males. And they would show off and flex their muscles to attract female attention.

A kangaroo’s muscles play an important role when it comes to mating rights. They live in groups of up to ten individuals, called a mob. The size of a mob depends on species and geolocation.

In any mob, the largest and the most muscular kangaroo is dominant throughout the mating season.

When females are in the oestrus cycle (reproduction cycle), they attract the attention of males. Which usually leads to fighting among male kangaroos.

Fights for females are generally short, yet they can last long and sometimes be very intense.

The bigger and more muscular kangaroo usually wins a fight.

Male kangaroos never stop growing, which allows them to extend their mating dominance as they get older. Female kangaroos are attracted to more muscular and bigger kangaroos.

Kangaroos are one of the most jacked animals in the world. Their muscular bodies are naturally designed for hopping as a way of travel, which makes kangaroos’ legs extremely strong. Their muscles are also important for reproduction. The stronger and more muscular the kangaroo is, the more rights it gets in the mob.

Thank you for reading. The next time someone questions you, “Why are kangaroos so buff?” – You already know the answer!

If you liked this post, here’s a recommendation for another popular kangaroo article: What is a group of kangaroos called?