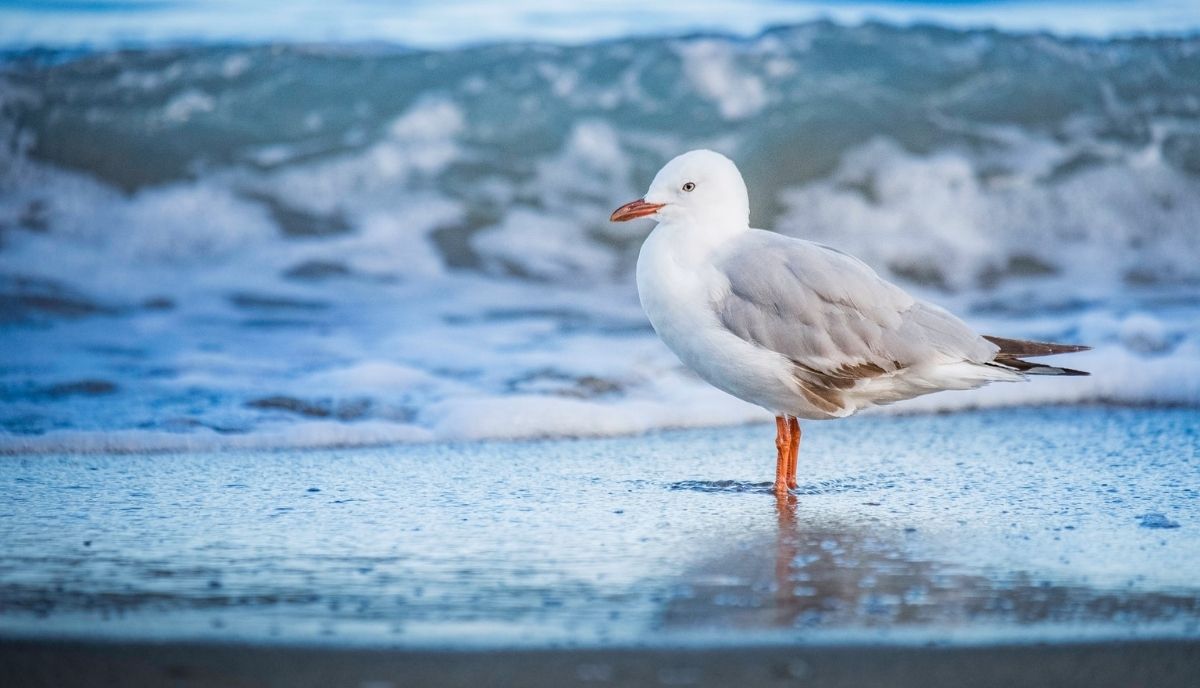 In this article, all your “wheres” and “whys” questions will be answered, but let’s start with the question – where do seagulls sleep?

Seagulls usually sleep on beaches when the waves are not hitting the rocks and unsettling the sea. They enjoy sleeping on lakes, rivers, and anything natural water sources. Gulls pick their sleeping habitats in areas where predators can’t hunt them. But, recently, seagulls have also been spotted near dumpsters and alleys, where they are closest to their improvised food source.

Where Do Seagulls Sleep?

Seagulls prefer sleeping near open water, while gulls in town roast on rooftops, dumpsters and just like I already mentioned, in your backyards.

Most seagull species are diurnal, meaning they sleep during the night, and are awake during the day. However, when it comes to seagulls, nothing is certain.

These scavenger birds do not have a strict sleeping place or schedule and have been frequently seen flying at night. The main reason some seagulls swap day for night is because of food.

And speaking of food sources, you probably have seagull visitors because you’ve had a habit of taking out the yummy trash at specific times of the evening or morning. Yeah, me too!

How Do Seagulls Sleep?

Seagulls sleep with their eyes closed and with their beaks tucked between the plumage. But they’ll open their eyes every five to ten minutes to check their surroundings and make sure they are not swallowed by a big whale, shark, or devoured by the eagles.

Very strange sleeping habits. I hope they manage to get some sleep.

But here comes the weird part. While we humans have figured it out that taking watch-by-turns to avoid enemies swooping in on us was the perfect strategy, but no, seagulls base their decisions on other birds in the colony to gauge what time is safe to sleep and what time isn’t.

Causing there to be a massive amount of birds sleeping and waking at the same time. What happened to the vigilante roasters?

When Do Seagulls Sleep?

For seagulls that prefer to sleep on lakes and rivers, they probably gauge the level of calmness of the water before tucking themselves to sleep.

Basically, they usually sleep at hours when they feel it’s calm, disturbing, and with lesser predators around.

Like all birds, seagulls can be very protective of their young. So sometimes it depends on the time their young have been satiated with hunger and have slept. Although research has it that most species of birds are inactive at night, while other birds – inclusive of a few species of seagulls – are active at night.

Where Do Seagulls Sleep When It Rains?

All kinds of true birds have feathers that were made to also withstand the rain. Their feathers get wet in the process of trying to block the rain from coming in and at the same time trap air to the body.

Once the rain begins to pour heavily and the feathers have taken in more than enough water, gulls resort to taking shelter under trees and hedges.

Some seagulls might decide to ride the rough waves into the eye of the storm for drylands. This might be a couple of miles away from their present location.

Seagulls also fly out before it pours when a storm begins to brew. Fishermen use the seagulls at times to know when a storm is coming. Seagulls might be the self-acclaimed neighbor backdoor, but at sea, they are the bay watchers and fishermen’s best friend – when they don’t try to steal from them that is.

Read Also: When and Where Do Lions Sleep?

What Time Do Seagulls Wake Up?

As birds are widely spread around the globe, it depends on the sun’s rising time. Seagulls are those alarm clocks you can’t shut off at will.

A curious animal enthusiast tested the sounds of his doorbells and the seagulls caring. When he compared both of them, it came to a whopping 70db! Expect an even louder disunited choir rendition during breeding seasons.