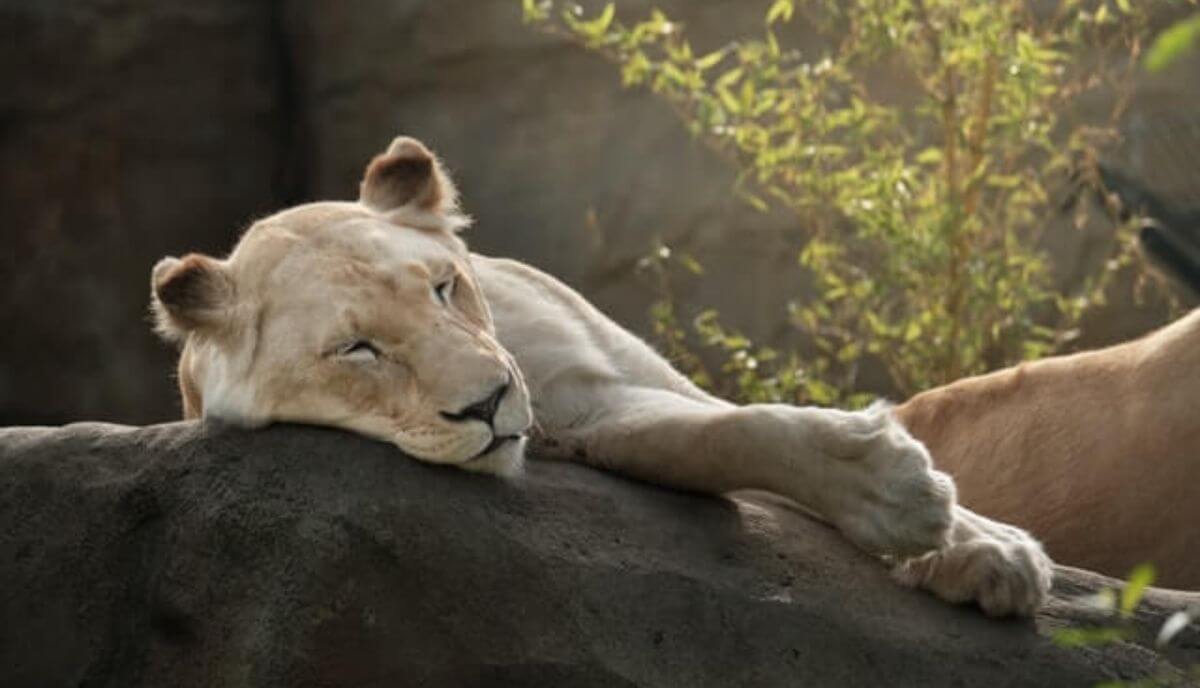 Just like sleep is crucial for the wellbeing of humans, it is equally important for animals as well, including the king of the jungle! Known to be the lethargic creature they are, lions spend the majority of their day resting.

But, if you wonder, where do lions sleep, how long, how, and when? You’re in the right place!

Where Do Lions Sleep?

Lions prefer sleeping in shady areas, like under a tree, in cave openings, under dense bushes, below fallen logs. Their sleeping choice is usually in cooler spots to beat the hot or warm temperature around them, especially during the hottest times of the day.

The life of a lion is, for the most part, filled with sleeping, resting, and napping. In the 24 long hours of a day, lions lie around sleeping and resting for close to 20 hours, and the remaining few hours are normally spent performing intense activities like hunting.

Lions can jump high and climb trees, and since they live in open woodlands, grasslands, and plains, they like resting in trees, catching the cool breeze, and getting a breather from the savannahs’ hot climate.

As you might know, lions are territorial animals and always mark their territory to about 150 square miles, warning other animals about their presence. Of course, no animals would dare to step into a lion’s territory, which makes it easy for the king and his pride to sleep in the open without any worries.

Lions’ sleeping spot varies depending on factors like the amount of shade available, proximity to a watering hole, and/or around common hunting spots.

How Long Do Lions Sleep?

Lions sleep or rest close to 20 hours a day. They are predator animals who spend a lot of their energy hunting, so they tend to conserve their fuel during the day as much as possible. However, the duration of sleep can vary between male lions, female lions, and lion cubs.

Male lions spend 18 to 20 hours of their day sleeping and resting. The rest of the time, they spend guarding their pride and territory, and while they do lie lazing around, they are always wary of their surroundings and keep an eye out for potential predators.

Female lions, sleep for anywhere between 15 and 18 hours a day. As the hardest working members of any pride, lionesses perform physically intense activities, including hunting for the entire family as well as caring for their young ones. This hard work involves the exertion of a lot of energy and brute force, which they can restore only with proper sleep.

Coming to lion cubs, they can sleep for about 12 to 20 hours. Just like human babies, lion cubs also spend their infancy eating and sleeping, and they wake up in between naps only to refill their bellies. As they grow, playing is another activity that takes up their time.

When Do Lions Sleep?

Lions, for the most part, sleep during the day. They are mostly inactive, napping, sleeping, or resting in the late mornings, hot afternoons, and early evenings, as they perform many of their activities during the cooler nights.

Lions are known to be nocturnal animals (for the most part, at least!), which means they are most active during the night since it is cooler at that time than during the day, and they also prefer to hunt at night.

In fact, there are also reports stating that the success rate is high when lions hunt on moonless nights.

So, these big cats accumulate their activities to be performed during early mornings, late evening, and of course, nights. After experiencing the wrath of the hot sun throughout the day, they love the cooler temperature of the night.

Also, the darkness offers perfect camouflage for the lionesses when they hunt, not to mention their night vision ability.

How Do Lions Sleep?

One common belief about lions’ sleeping habits is that they sleep with their eyes open; this information is both true and false. Here is why:

Since lions are known to be lazing around most of the time, sometimes, they tend to do so with one or both of their eyes open, lying down in the shade, sleeping lightly.

For the eyes of another animal or humans, the lions might look like they are sleeping with their eyes open.

However, during this time, no matter how still the lion looks, it will be fully aware of its surroundings. When it senses danger nearby, it will be up in no time, ready to attack with all its might.

The following are some most common questions related to the sleeping habits of lions:

Why Do Lions Sleep so Much?

Lions sleep so much in order to conserve and recover their lost energy so that they can do the same the following day (or night!). The primary source of food for lions is hunting, which requires a lot of energy, as well as protecting their territories.

Though considered lethargic animals, and the laziest of all big cats, it makes total sense why lions sleep so much.

Male lions, whenever there is a need, are known to cover as much as 20 km (over 12 miles) in a single night. As far as female lions are concerned, it is a well-known fact that they are the most active members of a pride and carry out most of the tasks, including the most strenuous hunting.

Therefore, if lions spend their day roaming around without any need for the same, they are wasting valuable energy that can otherwise be used sensibly during the night.

Do Lions Sleep at Night?

While lions typically sleep during the day, they are also known to nap during the night, some of the time, mainly before their hunting process begins. This is just their way of warming up and getting themselves ready for whatever is about to come.

Also, during a lioness’ recovery period after giving birth, she will need more sleep than usual, especially during the first few weeks.

This is the time when she will need to generate more energy to feed and care for the newborns. And the energy she restores during this time will also help her to rejoin the pride and get back on her hunting duties a few months later.

Do Lions Sleep in Trees?

Yes, lions do sleep in trees, especially those lion prides that live in forests and jungles. However, those lions that live in the African savannahs rarely sleep on trees because the trees there are rather small, weak, and brittle.

The forests and jungles, on the other hand, have lush greenery, with strong and thick trees and branches that are more than capable of holding the weight of these large wild cats.

In summary, lions sleep in various places, under trees and dense bushes, below fallen logs, as well as in cave openings. All they need is shade, and they would set themselves for a long nap. As they are primarily nocturnal, lions sleep during the day, sometimes up to 20 hours a day.

And here you have it. Thank you for reading. If you liked this article, here’s a recommendation of a similar read: Where Do Tigers Sleep?