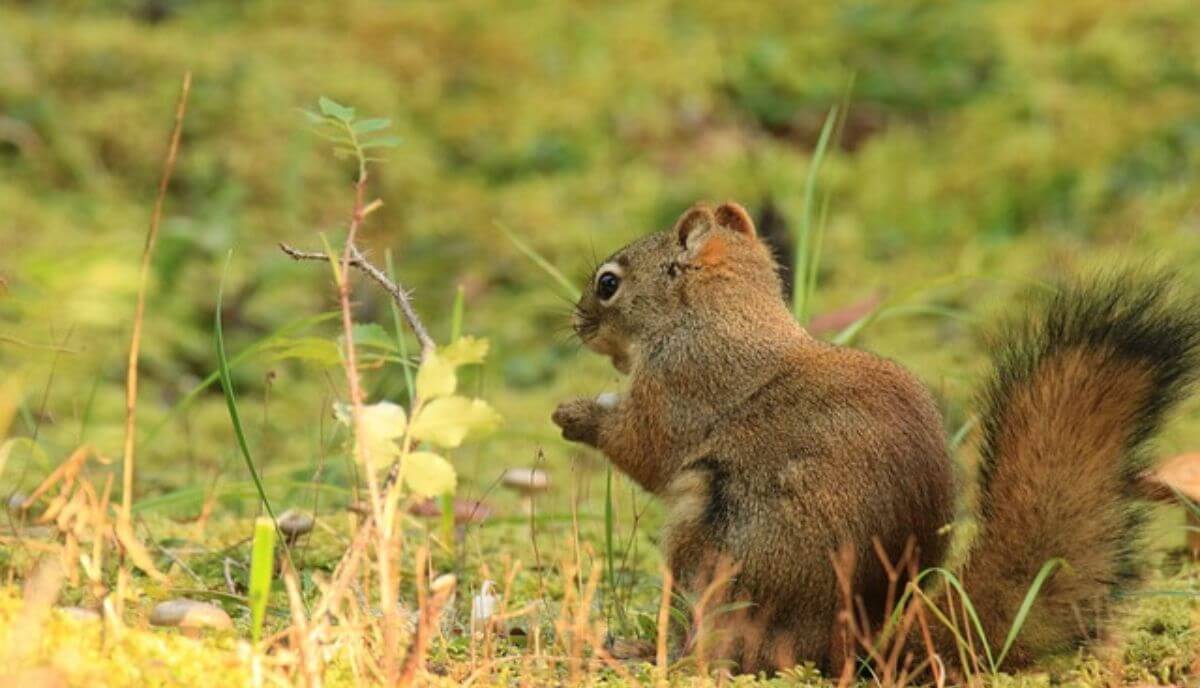 Mushrooms are often considered food for humans, but did you know that many animals eat these nutritious vegetables?

Some of the most common animals that eat mushrooms are marmosets, deer, bonobos, wild boars, slugs, fungus beetle, and land snails. But many other creatures would consume mushrooms if the opportunity arises, including bears, squirrels, gorillas, foxes, mice, pigs, and turkeys.

Mushrooms are rich in b vitamins, protein, fiber, and antioxidants, which is why they’re such a popular food source for animals in the wild. 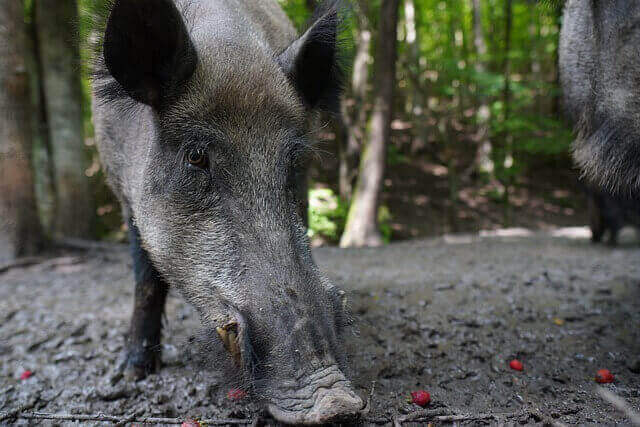 The first animal on our list with mushrooms as part of its regular diet is the wild boar. These beasts are omnivores with a similarly diverse diet as humans. They are not picky eaters and will eat almost everything readily available.

Not only do they eat delicious fungi, but wild boars also consume nuts, seeds, berries, leaves, and tree bark, as well as meat in the form of fish, rodents, lizards, snakes, deer, and even garbage.

Wild boars have high nutritional needs, requiring over 4,000 calories daily to survive. As a result, they have a few “food-finding” adaptations.

As part of their adaptability, wild boars can detect odors 25 feet below the ground surface, which is why mushrooms are a crucial part of their diets. 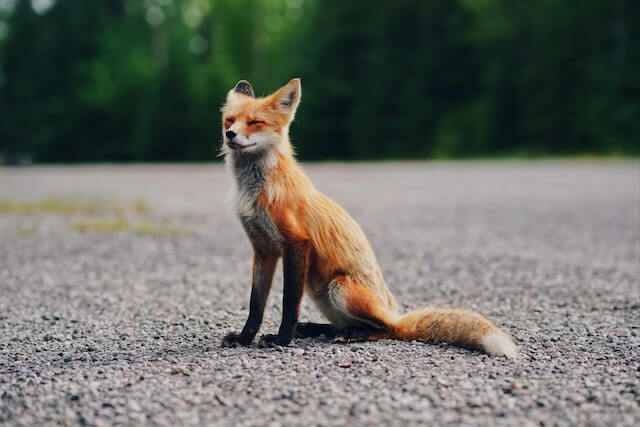 Like wild boars, foxes are omnivores with a diverse diet, including mushrooms.

Although they slightly prefer meat, as their primary energy sources are insects, reptiles, and birds, foxes are highly adaptable. So, in case of food scarcity, they will turn to berries, fruit, and fungi.

However, mushrooms aren’t a staple part of this predator’s diet since most edible fungi in the wild only grow for a short period each year.

Foxes consume over 2 pounds of food daily to fulfill their nutritional requirements. Consequently, if more enticing options are available, a fox would rather consume meat than mushrooms. 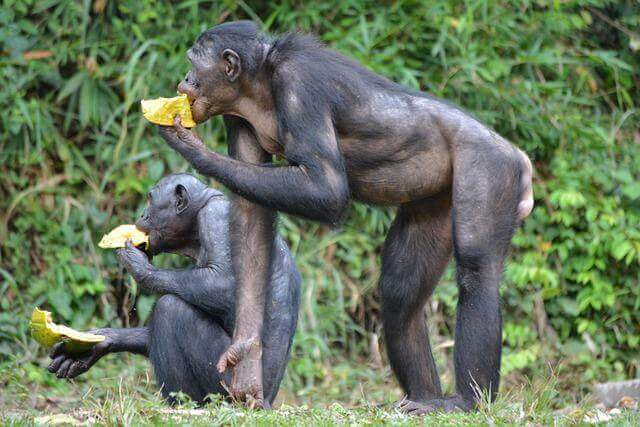 Bonobos are great apes, similar to chimpanzees, that are one of the closest relatives to humans. Unsurprisingly, they are omnivores that are known to eat eggs, honey, insect larvae, small mammals, and even mushrooms.

However, unlike humans and other omnivores on our list, bonobos are technically frugivores, meaning they thrive on eating fruit, which comprises over 50% of their diet.

Still, bonobos have an interesting relationship with eating fungi. Unlike wild boars and foxes, bonobos seem to seek them out actively.

A 2021 study found that bonobos are actually more likely to eat fungi when they have easy access to fruit. As a result, these animals eat mushrooms as a regular part of their diet, fulfilling nutritional needs that are otherwise unavailable. 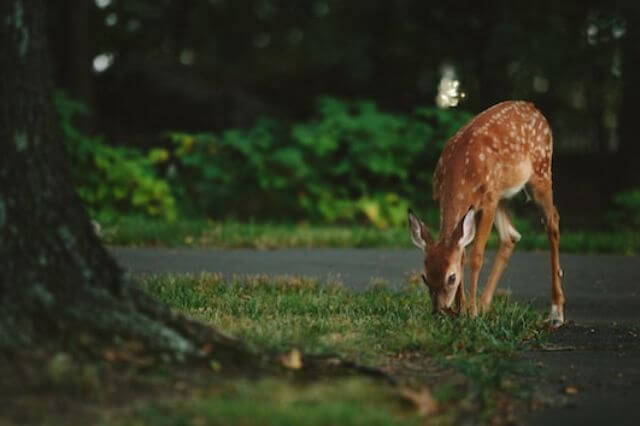 The first herbivore on our list that likes to munch on a fungus is the deer. Deer require a lot of minerals on a daily basis to support their nutritional needs, as well as to ensure healthy and strong antlers.

Depending on the species, deer mostly live in forests where mushrooms and lichen are readily available. However, these mammals seem to eat fungi, not only because it’s convenient but also because they enjoy the taste.

On top of that, deer have much stronger stomachs than humans – allowing them to consume foods that we consider inedible.

The most common types of mushrooms that deer consume depend on their location. Usually, these include waxy caps, russula mushrooms, luxuriant ringstalk mushrooms, and even the fly agaric – a known psychedelic.

Interestingly, after consuming the psychoactive fungi, deer can seem disoriented and more vocal. 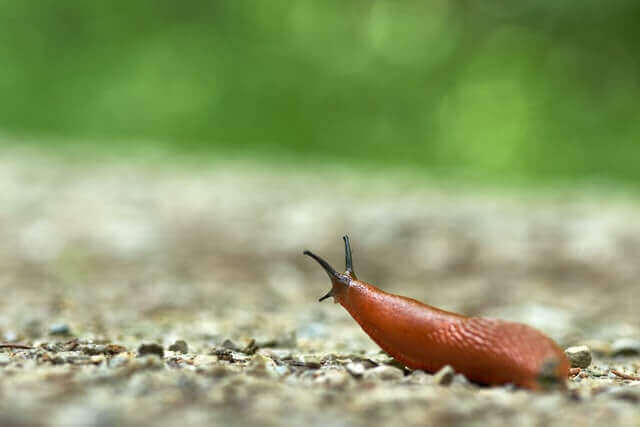 Slugs are known to enjoy mushrooms as part of their regular diet. Besides mushrooms, they eat fresh or decaying plants, earthworms, and grass.

It’s easy to see when a mushroom has been nibbled by a slug since it will usually be left with a slimy trail.

In addition, these mollusks are a significant part of the ecosystem. Apparently, they are crucial for creating new colonies of fungi spores.

Slugs act as distributors of these spores by consuming mushrooms and spreading the colony through their feces. Pretty interesting, right? 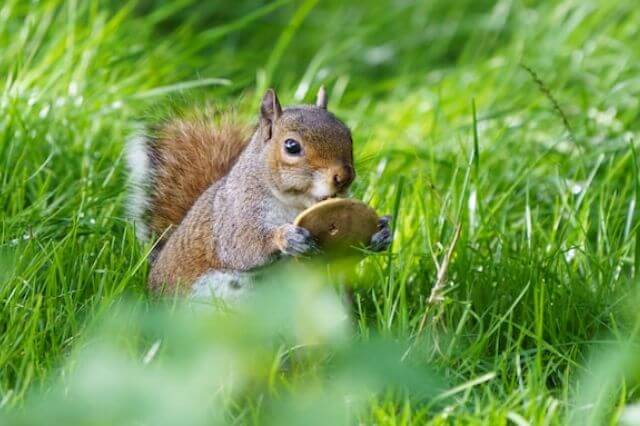 You may already know that squirrels are excellent foragers, spending most of their day finding food to hide. The diet of these adorable rodents is primarily herbivorous and almost entirely dependent on eating nuts and seeds.

However, squirrels will also eat fruit, plants, mushrooms, and even small amounts of meat.

What’s interesting about squirrels and mushrooms, however, is that some subspecies are immune to known toxins that these fungi produce. A 2022 study found that Japanese squirrels can eat poisonous mushrooms without issues.

It is believed that mushrooms develop these toxins to deter animals from consuming them. It’s fascinating how an animal that doesn’t even have fungi as a primary food source develops immunity to the poison. 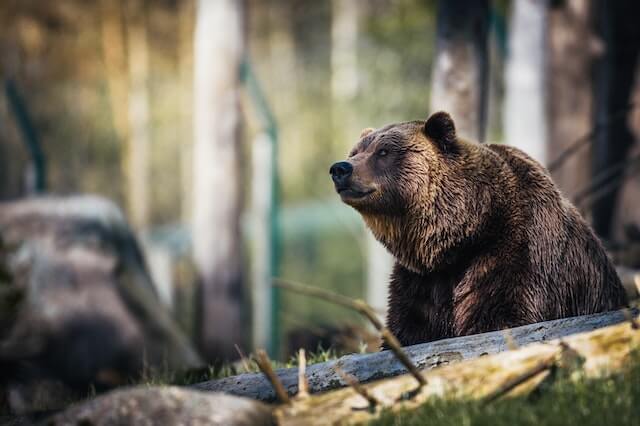 There are eight species of bears in the world. Apart from polar bears, mostly carnivores, and pandas, which survive solely on bamboo – bears are omnivores with highly diverse feeding habits, with a slight preference for a plant-based diet.

Most bears are opportunistic, meaning they will eat what they find available. As a result, it is known that these animals enjoy consuming mushrooms as well.

Still, unlike others on our list, bears don’t tend to forage for mushrooms and will only eat them if they’re available in plain sight.

Depending on the species and location, bears enjoy morel mushrooms, puffballs, slippery jacks, russula, and truffles, among others.

Like deer, these beasts can stomach mushrooms that would be poisonous to humans. They also have a powerful sense of smell – allowing them to avoid a particularly toxic species of fungi. 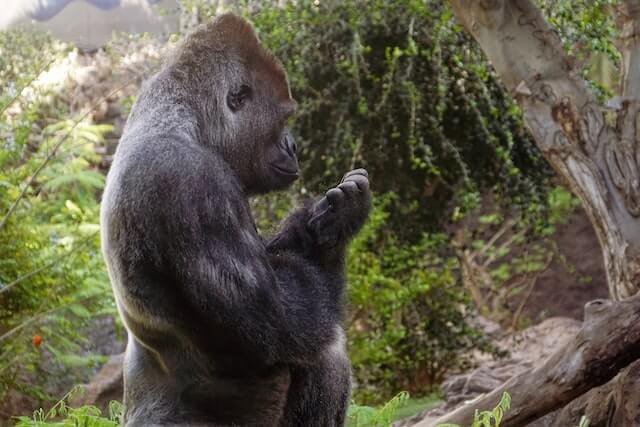 We’ve mentioned that bonobos and chimpanzees are the closest relatives to humans regarding DNA. Following right after are gorillas, who share around 95% of our DNA.

Another ape with a predominantly herbivorous diet, gorillas are known to feast on leaves, roots, fruits, and, yes – mushrooms.

However, fungi aren’t a top source of nutrition for gorillas. In fact, they spend very little time searching for mushrooms, opting for other foods instead.

Interestingly, these animals are rarely seen drinking water, as they fulfill their hydration needs through their diet. 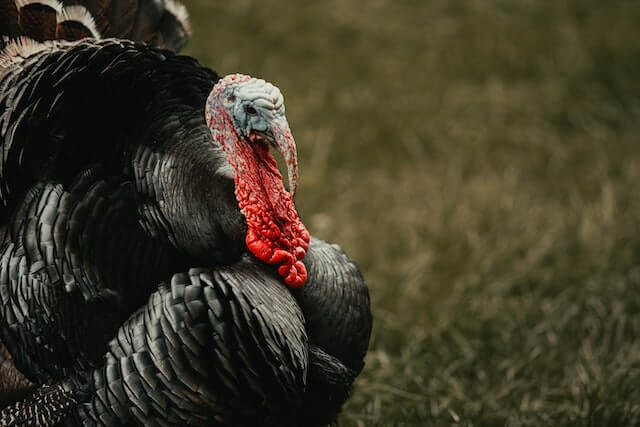 For wild turkeys, that means foraging for food. Their diet usually consists of nuts, seeds, and berries, but also lizards, snakes, slugs, and even sand to aid digestion.

As food can be scarce for these large birds, they are open to eating anything they can find, which includes mushrooms. In particular, they have a special fondness for morels.

These fungi can be found in many different environments and usually grow in spring, particularly after a cold winter. 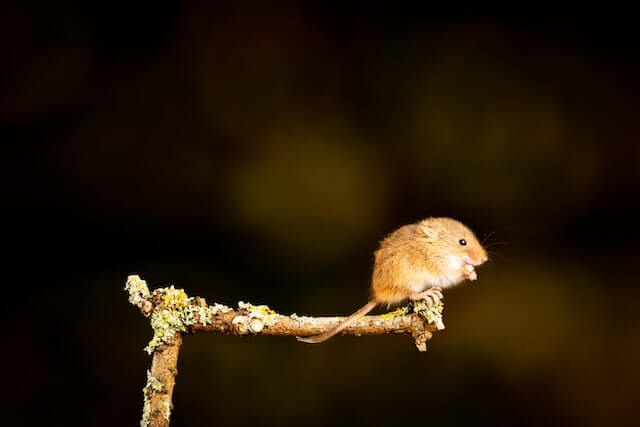 Mushrooms are a staple in a mouse’s diet for numerous reasons. For one, mice are naturally curious and intrigued creatures – they love to explore and spend a lot of their time searching for new foods.

Although these tiny rodents primarily feed on seeds and plant-based food in the wild, they are very adaptable. They will quickly get used to new additions to their diet.

Like slugs, mice also play an essential part in a forest’s ecosystem. These creatures spread spores to create new colonies of fungi through their feces.

Since small rodents, such as mice, tend to have huge populations, they distribute many mushrooms, especially truffles. Truffles have no natural way of spreading since they grow underground. 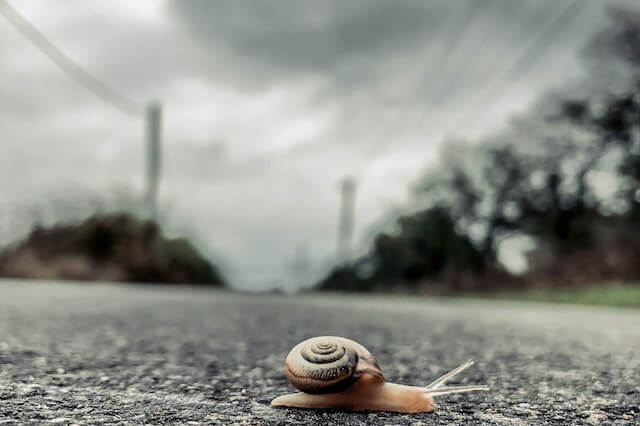 In the most simplified way, snails and slugs aren’t all that different. The main difference is that snails have an outer shell, while slugs have an internal shell or don’t have one at all.

Diet-wise, land snails can be split into different groups, but most are herbivorous.

These mollusks like to eat berries, leaves, bark, fruit, vegetables, algae – and fungi. As a result, if you wonder whether you can give a white button mushroom to your pet snail, rest assured that it would be a tasty treat! 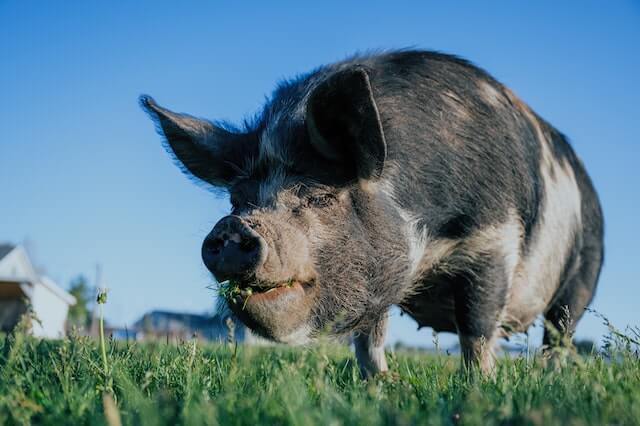 Did you know that pigs are sometimes used for hunting for truffles, one of the most expensive foods in the world? That’s right, and the unassuming livestock boasts impressive foraging skills paired with their keen sense of smell.

It’s interesting to note that female pigs are usually used for searching truffles because the fungi emit an aroma similar to a male pig’s musk.

Nowadays, people prefer to use dogs to find truffles for a straightforward reason – it’s challenging to train a pig not to eat the mushroom it has found! It’s safe to say that these mammals have a strong fondness for fungi.

Whether we’re talking about a feral hog or a pet pig, mushrooms are a great source of nutrients.

However, it’s important to remember that pigs are domesticated animals. Although wild hogs may have an instinct that helps them differentiate a poisonous fungus from a safe one, a domestic animal cannot be expected to do the same.

Handsome fungus beetle is an endearing name for the Endomychida, which is a beetle that, as you may have guessed, feeds almost exclusively on fungi.

These creatures can be found in hay, on trees, and mushrooms (for example, on a puffball). They are somewhat rare, taking residence in Southeast Asia and equatorial Africa.

Further research is needed on the feeding habits of these aptly-named insects. However, when discussing animals that eat mushrooms, it’s difficult to omit a creature that received its name because of it!

The last member on our list of animals that feed on fungi is the Goeldi’s marmoset. Also known as the Goeldi’s monkey, it is the only tropical primate that requires mushrooms in order to survive!

The primate can be found near the Amazon basin in Bolivia, Brazil, and Colombia.

Goeldi’s marmosets are omnivores, but their diet depends on the season. During the wet season, when vegetation flourishes, their diet consists of fruit, spiders, lizards, and other invertebrates.

However, in periods of low rainfall, their primary source of energy is mushrooms, compromising more than half of their diet. Specifically, they have a particular fondness for jelly fungus and bamboo fungus.

In conclusion, it is clear that mushrooms play an important role in the diets of various animals, from insects and mollusks to mammals and birds. While some of these animals consume this vegetable to supplement their nutritional needs, others eat it as a staple part of their diet.

Thank you for reading. If you liked this article, here’s another popular post about animal diets: What animals eat pumpkins?