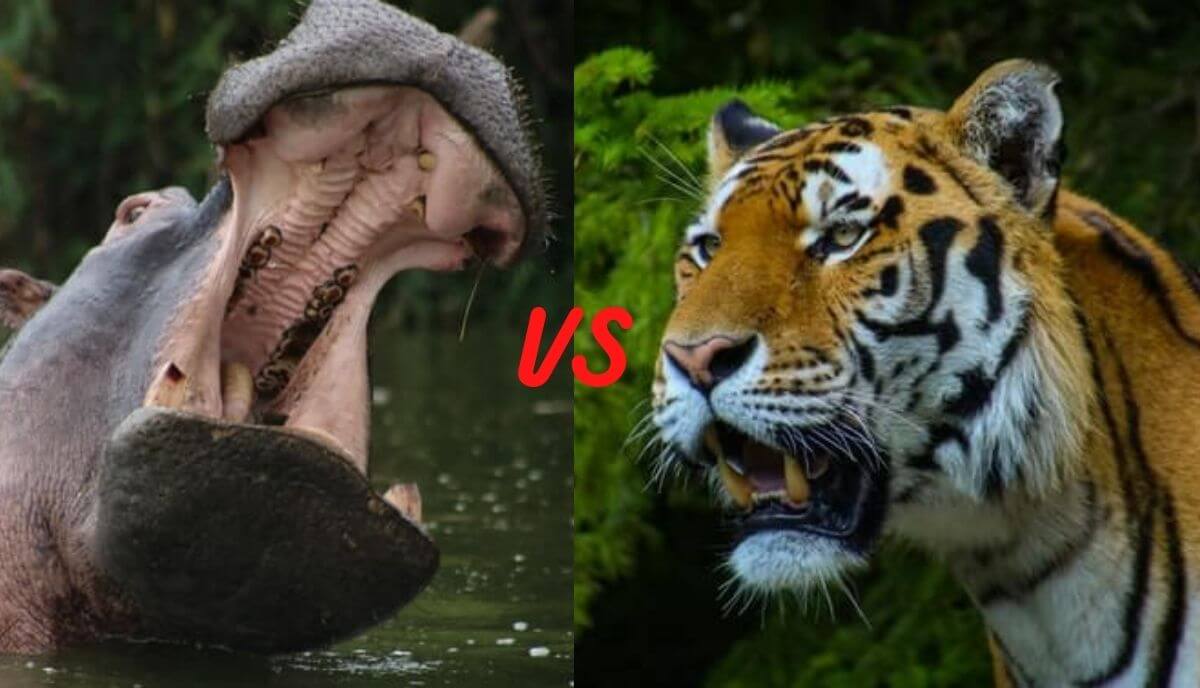 It’s hard to decide who would win in a fight between a tiger vs hippo. So many factors like size, age, fight terrain, and many others come to play, and the answer could be completely different in different circumstances.

But, what if you could get an answer to any question — even the ones that seem impossible to know certainly?

If a tiger and hippo fight, the winner would be the hippopotamus based on brute force. A tiger would only win if it outsmarts the walking tank. The semiaquatic giant has the upper hand in most categories and will likely survive due to its armor-like skin and powerful bite.

We will compare and show you the most likely winner of such a fight in the text below. If you are curious, continue to read!

Size Comparison of Both Animals

When it comes to size, each animal is different. Looking at both – tiger and Hippo, you can see the clear difference in the height, length, and weight, which are determinants in a possible fight in the animal kingdom.

As you can see, the size difference is quite significant between the two animals. However, this is far from enough to put a verdict on who would in a potential fight between a tiger vs hippo. Other factors can change the tide.

Tiger vs Hippopotamus – Who is Stronger?

Now this one is interesting; as you know, when it comes to animals, we measure their strength most often by their biting force. To do so, scientists take various measures and calculate the bite strength of an animal in PSI – Power Force per Square Inch.

Although it does not have the most robust jaws – the big cat has its secret weapon. THE CAT PUNCH!!!! – this one is amazing and surprising at the same time. If you are a cat owner, you probably have seen your cat playing around throwing punches.

Now, do you know what happens if a tiger does this? If it is your cat, it’s cute – but a tiger swap power can be anywhere from 4 500 kilograms to 10 thousand! With this force, you can easily be thrown away like hit by a truck.

Related: How Strong is a Tiger?

These animals prefer biting, so you can not expect them to throw punches and kicks. However, their biting force is among the top of the animals on the land – so their most potent weapon is also the most effective one.

Besides that, hippos weigh more than the average vehicle. You don’t want this powerful giant to trample on you at full speed.

Behavior and Intelligence – Hippo vs Tiger

This part can be interesting – while the hippos are enormous, they are also dumber, while the smaller cats are being intelligently superior.

Putting it like that may not mean a lot, but knowing that the hippopotamus is not one of the most intelligent animals is what makes them dangerous and unpredictable. That behavior there can be very problematic whenever you are near them.

They have been part of many types of research and tests. But scientists still can not understand them completely.

Sometimes you may even wonder if the big animal knows what they will do – their unpredictable nature makes them hard to understand. On top of that, they are strongly territorial and aggressive – they may attack you unexpectedly.

Related: How Dangerous Are Hippos?

On the other hand, when it comes to tigers, we can say that they are highly intelligent, have a good memory, and can even make some brilliant moves – especially when hunting.

The best example of how clever the big cat is seen in its hunting skills. For instance, they will use various tricks to separate the victims from each other and then launch a final attack killing their prey.

Another great example is that the animal has a huge variety of skills. For instance, as mentioned above, they can swipe the animal, bite it, scratch it, cripple it, etc.

Tigers come up with various methods based on the current situation and always pick the best option.

Attack and Defense: Comparison Between Tigers and Hippos

Looking at the final points, it is time to compare them to the actual fight scenario. Reading all the information from above, you already know the difference in their weight class, behavior, intelligence, and even their most potent weapons.

If both animals are to fight, the one with the upper hand in the weight class will be the Hippo. Overall it is bigger, heavier, and can easily crush a tiger with its body.

Due to their aggressiveness and low intelligence, they are most likely just to rush the big cat straightforwardly. That will be very dangerous – but not deadly.

The more intelligent tiger will definitely avoid it in such a situation – they are almost three times faster than the running tank. Dodging the attacks, the cat will gain the initiative to use some of its skills and attack vital points of the hippo, which is typical for the animal type.

At this point comes into play the hippopotamus’s strong defenses – the rock-hard skin. That will be the biggest obstacle facing the tiger as the hippo skin is super durable.

The next move will be to try to bite – from the hippo side. Its biting force is deadly and will easily crush even the tiger’s muscular body. So the big cat will most likely avoid it again and rush for weak points like the eyes and neck, probably one of the few ones in the hippo.

Overall the fight would last long and end up with both animals getting hurt. The different factors in which animals exceed will prolong the battle and increase the chance for both animals.

The most definite winner will be decided by various factors like the environment and who uses their advantages better. For example, in the water, the tiger would be smashed.

In a jungle environment tho, the hippo will lose – as it will be hard to use its speed and power in a narrower place.

In the end, the winner between a hippo vs tiger would be based on how great the animal is in using its skills and weapons.

Comparing just brute force and size is not continuously determining. If you look for an answer based on numbers, the hippo will be the winner. On the other hand, if you look up skills and intelligence, I would be a tiger.

Bottom Line – Tiger vs Hippo: Who Would Win

The various factors would determine the winner in a fight between a tiger vs hippo. In most cases, the hippo would come out victorious – due to brute force. But if a tiger utilizes all its skills and intelligence, then the big cat can also be a winner.

Thank you for reading. Hopefully, this article was interesting and fun to read.