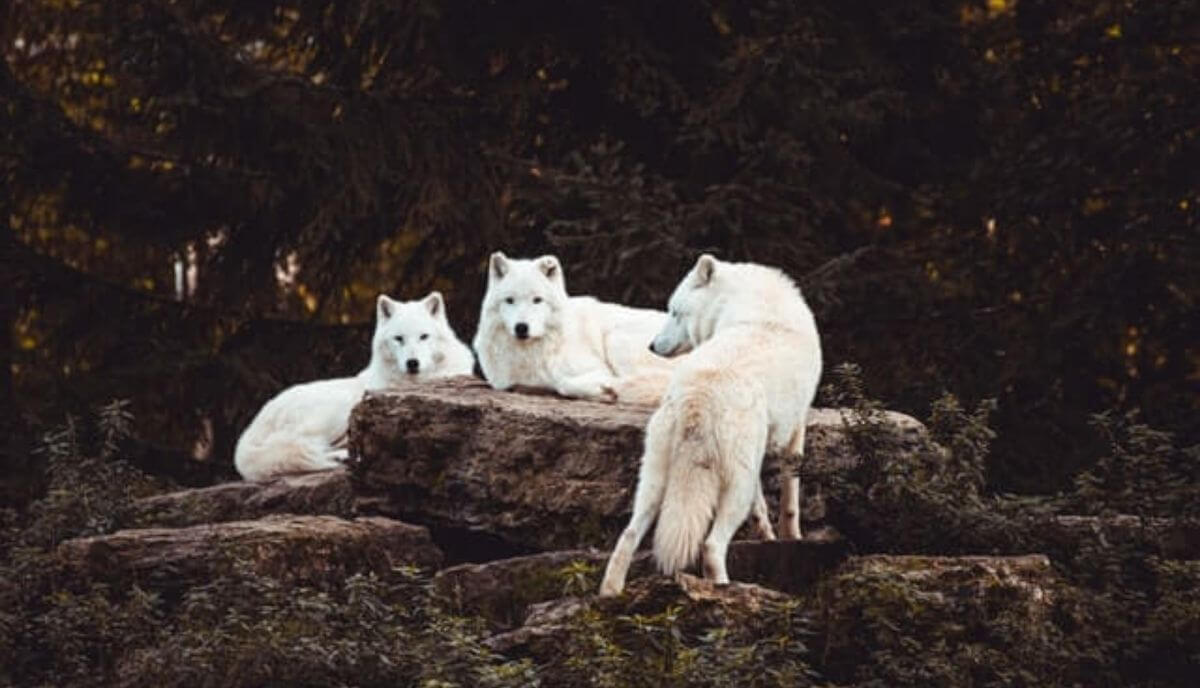 Wolves are powerful predators known for high endurance and immense physical strength. They have massive jaws and bite forces of more than 400 PSI, powerful enough to pierce through thick bones with ease.

But not all wolves have the same level of strength. Some wolves are much stronger than others.

Which leads us to the question – which wolf breed is the strongest?

However, the Mackenzie Valley wolf is not the only strong wolf breed out there.

In this article, we are going to talk about the top five strongest wolves and what separates them from the rest.

Top 5 Strongest Wolves in the World

There are about three wolf species: the Gray wolf, Red wolf, and Eastern wolf, which are further divided into 40 subspecies found around the globe.

While all of them are lethal hunters and apex predators, we are going to talk about the top five best of the best.

As introduced, the Mackenzie Valley wolf is the largest and most powerful wolf breed in the world. This beast stands up to seven feet and weighs a maximum of 154 pounds.

Mackenzie Valley Wolf can run at a speed of 64 kilometers per hour; they are fast enough to hunt even the quickest of their prey.

Mackenzie Wolves have a variety of animals they target as prey. This includes sheep, rodents, beavers, mountain goats, and elks.

Also known as the Northwestern wolf, the Mackenzie Valley wolf is commonly found in the mountainous forests of Canada and Alaska. They also inhabit the area near the Mackenzie River.

Interestingly, the wolves are introduced to control the elk population and coyotes.

Like most wolves, the Mackenzie Valley wolf moves in a pack of at least six members. To ensure a sure kill, they will cause a stampede that can lead to the weakest of the herd being left behind.

Although a predator, the Mackenzie Valley wolf are a target for grizzly bears, polar bear, tigers, and humans. Using their specialized body to hunt, the wolves also use their thick and long limbs to outrun their threats.

Having large lungs, they have a huge amount of stamina that allows them to travel up to 70 miles per day.

Like the Mackenzie Valley wolf, the Eurasian wolf is a Gray wolf sub-specie. They are also known as the Common Wolf, the European Wolf, and the Chinese Wolf, among other names.

The Eurasian wolf has a variety of names because it can be found within two continents – Europe and Asia.

Also, the physical characteristics of these wolves will depend on the region they are found.

Generally, they are five feet in length and weigh up to 130 pounds. Their length compensates for their skinny build.

What sets Eurasian wolves apart from other wolves is their coarse fur. European Wolves have a wide range of fur colors. They are spotted having beige, white, black, gray, and red-colored furs.

Eurasian wolves are skilled predators, running up to 62 kilometers per hour. They can easily hunt for small to medium animals, such as wild boars, hares, and red deer.

However, since Eurasian wolves live in a diverse habitat, they also have other alternative prey like frogs and lizards.

In European countries, Eurasian Wolves started preying on livestock. Currently, there is a conflict regarding the culling of these animals, considering they are protected under EU laws.

Despite their skinny build, Eurasian wolves are very strong wolf breeds. Forming a pack does not only make it easier for them to hunt but also protect themselves. They are also apex predators, meaning they do not have a natural predator.

Recently, these social animals started forming small packs. In the Carpathians, some Eurasian Wolves even started becoming solitary hunters. It appeared that this was caused by changes in their habitat.

As their name suggests, Arctic wolves or Tundra wolves are found in Northern Arctic and Boreal Regions. These winter animals thrive in an extremely cold climate. Thanks to its thick and dense underfur.

Besides their thick fur, Arctic wolves can withstand cold with their small rounded ears. Having this specific trait helps reduce body heat loss.

Most Arctic wolves have gray colors and a mix of red and black. They also have bushy tails, which is their distinguishable feature.

Arctic wolves are as large as Mackenzie Valley wolves, having a body length of five feet. They usually weigh up to 125 pounds.

Despite being medium-sized subspecies, Arctic wolves are known for being quite strong wolves with high endurance. They also have long legs and a high stance, which helps them run up to 67 kilometers per hour.

Like every other wolf species, Arctic Wolves are carnivores and predators, and they mainly prey on mammals such as moose, bison, and mountain sheep.

These powerful wolves have a taste for bigger mammals because an adult individual needs to eat at least 20 pounds per feeding.

Due to their location, Arctic Wolves mate in a later season. Their breeding season is around March to April, while other wolves mate around January to March.

Similar to other wolves, Tundra wolves move and hunt in a pack. Unfortunately, they are not as protected as other wolves.

In Russia, these wolves are being hunted as they prey on livestock. This led to a sudden demand for hunters to cull the wolves.

The Interior Alaskan wolf, also known as the Yukon Wolf, lives around Alaska and Yukon.

Having a body length of seven feet, the Interior Alaskan wolf is one of the largest and strongest wolf breeds. This beast is also quite heavy, weighing on average 110 pounds.

They are differentiated from other wolves because of their teeth. Interior Alaskan wolves have large and heavy teeth in both jaws. Another key difference is their skull.

The Interior Alaskan wolf has a bigger skull than a Mackenzie Valley wolf but has a considerably smaller body size.

These wolf breeds are easy to spot due to their dominantly black fur. Their fur may have white, gray, and brown spots.

This is probably one of the reasons why Interior Alaskan wolves are not found in Tundra. Their fur is too easy to spot in a completely white area.

This highly intelligent animal cooperates in a pack to hunt down large prey like bison, elk, and moose. A pack is usually composed of six to nine members.

Interior Alaskan wolves will stalk their prey and attack it from all sides. They use this method to reduce any possibility of the prey running away.

At the same time, this minimizes the chance of any of the wolves being injured.

However, Interior Alaskan wolves suffer some problems with moose as the latter tend to stand their ground. It makes moose more difficult to hunt in comparison to other prey.

The Great Plains wolf has another interesting name – the Buffalo Wolf. Unfortunately, this beast was already declared extinct in 1926. There are unverified reports that they still exist.

Regardless of their existence, it does not remove the fact that they used to be one of the strongest wolves in the world.

Great Plains Wolves used to roam the lands of southern Manitoba and Saskatchewan in Canada to northern Texas in the United States.

Their fur color was mainly ash-gray, with a mix-match of brownish-black and gray. It was also noted that their fur had black tips, giving the gradient effect.

The Great Plains wolf was also quite a fast and agile animal. These wolves could reach speeds of up to 64 kilometers per hour.

These powerful wolves were usually spotted in a pack of five to six members.

Native Americans in North Dakota described the Great Plains wolves as one of the strongest wolf packs in the world as it only took three wolves to take down a bison.

Besides bison, Great Plains wolves used to hunt buffalos. Their large built and muscular bodies can explain why they opt to hunt large-sized mammals.

Interestingly, Great Plains wolves are reported to be not full-blooded wolves. In 1856, a study was conducted to compare the skulls of this beast. The Great Plains wolf’s molars show that they are a hybrid.

There were stories about them being tame in comparison to other apex predators. Others said that due to the lack of fear of humans, the Great Plains wolves used to mate with domesticated dogs.

A year after the study, the sightings of the Great Plains wolf became smaller. The last known wolf was killed in 1922.

Conclusion – What is The Strongest Wolf Breed?

The Mackenzie Valley wolf is considered to be the most powerful wolf breed, thanks to its long limbs, high stamina, and heavy build. However, all wolf breeds are apex predators in their habitat and have their own strengths.

Though every breed has different strategies and tactics, they all tend to live in a pack.

As for the Mackenzie Valley Wolf, they heavily rely on the stampede strategy. So, they can only exert their energy towards hunting the weakest of their prey.

Unfortunately, even being the most powerful wolf breed, human activities are their biggest threat. To prevent further damage to them, the government is interfering and imposing rules to protect them.