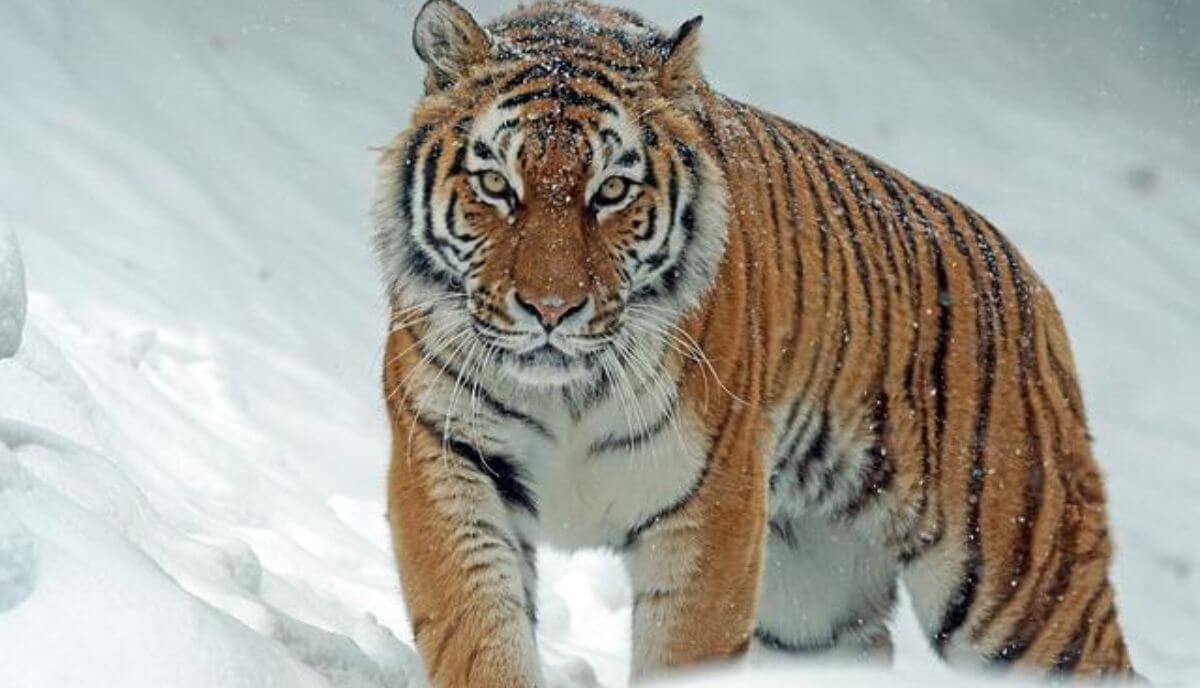 And if you’re curious to find out which one is the strongest tiger species on the planet, you are in the right place.

Let’s look at some other powerful tiger species and determine what makes them so uniquely strong. 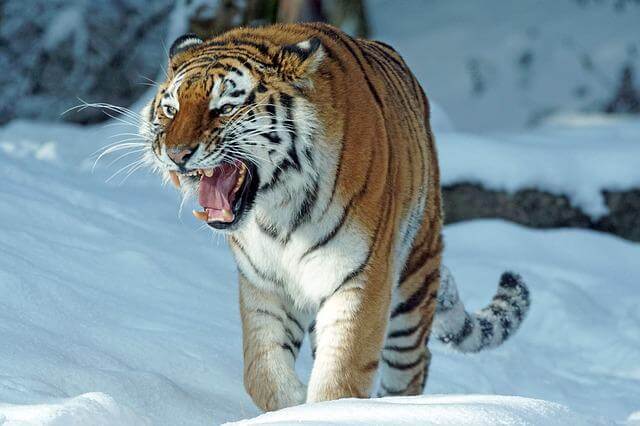 As mentioned, the Siberian tiger is the strongest and largest tiger species. In fact, they are the most powerful of all big cats.

Often confused for the Bengal tiger, this tiger is slightly larger than the latter and stands a higher chance of winning a fight in case the two ever meet.

Siberian tigers usually avoid conflict with humans; however, if they fall ill or find it hard to hunt their usual prey, they may choose to attack humans.

You can distinguish Siberian tigers from other subspecies by their striped fur. Similar to people’s unique fingerprints, tigers can never have the same striped pattern. Unlike other tigers, a Siberian tiger has a mane, and its stripes are also fewer and paler.

The mane and thick fur help the animals to keep their bodies warm in the cold regions of Russia, where they reside. There are also small populations of these tiger species in North Korea and China.

Siberian tigers are largely solitary creatures, interestingly, far more than any other subspecies.

When it comes to their diet, Siberian tigers hunt various games, from fish and rabbits to elk, deer, and even bears! They can consume up to 60 lb (27 kg) of meat in one sitting. However, they generally eat 20 lb (9 kg) on a good day (source). 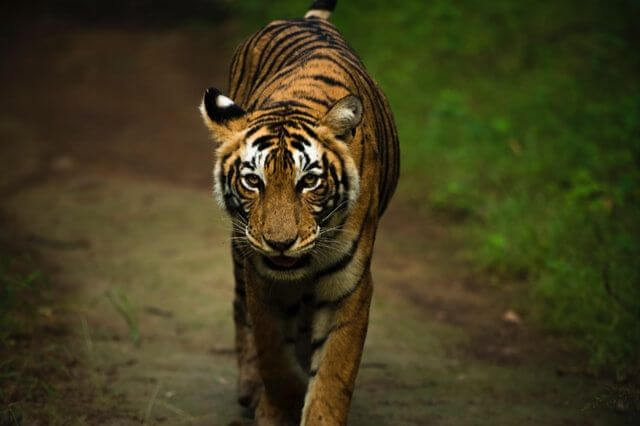 Also known as the Indian tiger or the Royal Bengal tiger, this feline is among the oldest and most recognized tiger species. It is estimated that the origin of Bengal tigers dates back 12,000-16,000 years from the late Pleistocene era.

These wild cats are characterized by their orange fur, black stripes down the back, and white tufts around the ears.

Bengals are the second-strongest tiger species thanks to their size, mighty jaws, strong hind legs, and front paws that can tear apart and cripple any creature in their way.

Apart from that, Bengal tigers are arguably the most beautiful tiger breeds. Have you seen the white tigers before? Those belong to the Bengal tiger species.

While many assume that white tigers are albino, quite the contrary, they have a genetic mutation that contributes to their white fur and blue eyes. It’s a rare mutation, occurring in just one in every 10,000 births.

In addition, Bengal tigers are also impressive swimmers and can swim up to 30 km a day.

Their soft paws conceal blade-like claws that grow up to 4 inches (10 cm) long. One punch of their foot could fracture or crush the skulls of almost any living organism.

Bengal tigers can kill a game that is 2,3 times their own weight. Even elephants and rhinos tend to avoid these big cats.

Indochinese Tigers, also known as Corbett’s tigers, are felines recognized by their short narrow single stripes. Unfortunately, they are endangered, with their population decelerating fast.

According to Nate Geo, only about 250 Indochinese tigers are left, classifying them as endangered species.

This species makes them remarkable night hunters, as they evolved into seeing perfectly in the dark. Moreover, they have excellent hearing that helps them hear prey from miles away.

Like its tiger cousins, the Indochinese tiger prefers a solitary lifestyle. You might catch a mother tiger taking care of her cubs. But they usually leave their parent as soon as they mature.

These tiger species are rather shy and avoid confrontation with people in their habitat. On the other hand, humans (their only predators) often hunt these majestic felines for sport or their fur despite being near extinction. 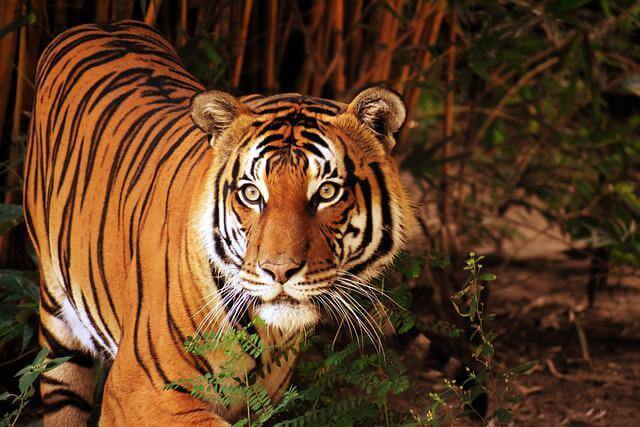 Like the Indochinese species, Malayan tigers are critically endangered, with less than 300 individuals left.

Malayan tigers feed on deer, wild boars, bearded pigs, monkeys, and reptiles. They are capable of eating up to 88 lbs (40 kg) of flesh at a go.

Besides their hunting skills, Malayan tigers are exception swimmers and are often seen in rivers and streams. Their webbed paws help propel themselves through the water more efficiently, while their muscular legs serve as paddles.

These felines have a perfect fur combination for the habitat they live in. As a result, it is remarkably hard to spot a Malayan tiger as it constantly moves in tall grass or dense vegetation blending perfectly into its environment.

Adult Malayan tigers, like other subspecies, prefer a solitary way of living, and they mark their territory by clawing tree trunks to leave their scent that keeps other felines at bay.

Sadly, this tiger species is declared functionally extinct, with its existing population currently preserved in zoos. There are only 30-40 South China tigers left in the world.

Hopefully, with the help of conservationists, these precious big cats will be reintroduced back to their natural habitat once they learn how to hunt in the wild.

Guided by the past, it won’t take them too long to carry on what they were doing the best. South China tigers are exceptional predators and hunters, associated with an old regal strength symbol.

A fully grown South China tiger can weigh 221 – 430 lbs (100 – 195 kg). While not as big as most other tiger species, their small stature has an advantage in maneuvering swiftly through thick forests.

The South China tiger’s hunting tactic combines patience, speed, and timing. They hide in tall grass while stalking their prey until the perfect opportunity to strike presents itself.

Having read this post, you can now identify the five strongest tiger species on the planet. Some of them are almost extinct, like the Indochinese, Malayan, and South China tigers, while the Siberian and Bengal tigers are the most dominant.

The population of all tiger species is rapidly decreasing by the year. If we don’t support tiger conservation efforts, there might not be any more of these beautiful felines to view anymore in the coming decades.

Let’s hope it doesn’t come to that!

Thank you for reading. If you liked this post, here’s another popular topic: Most Dangerous Big Cats.