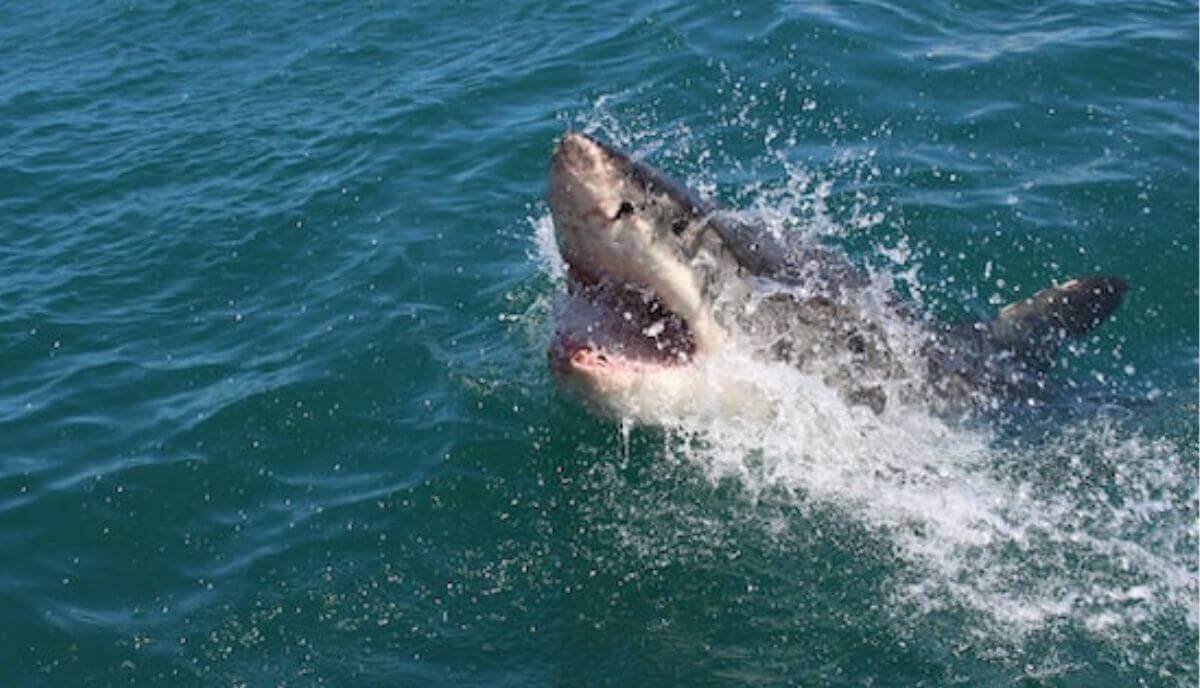 It might be fun to snorkel and explore the ocean, but when you do, make sure you learn about deadly marine wildlife.

There are shark attack reports worldwide each year, and people are left in shock after hearing or seeing such scenes.

The truth is that if you go out swimming, it’s very unlikely to become a shark’s food source. Of all sharks, only about 30 are known to attack people.

However, it’s not harmful to know a few facts about some of the most powerful sharks around the world.

So, I’ve created a list of some of the world’s deadliest and strongest sharks.

Top 6 Strongest Sharks in the World

There are more than 500 extant shark species on the planet ranging from 8 inches to up to 60 feet in length.

Among these, the most powerful and toughest ones are listed below.

The great white shark is known for its aggressiveness and ferociousness. It has an incredibly strong physique and can pursue even the fastest swimmers in the ocean.

Being apex predators, great white sharks have no natural enemies except for the orca.

Despite the rumors of being man-eaters, great white sharks attack humans only by mistake, as they have a sight problem. This means they can mistake any human for their prey.

However, great white sharks are the leading species when it comes to fatal human attacks.

Male great white sharks are smaller than females and can grow up to 13 feet, weighing up to 1,700 pounds. On the other hand, the female weighs anywhere from 1,500 to 2,450 pounds, measuring up to 21 feet.

While the white shark’s body shape (and size) might suggest that this fish doesn’t swim very fast, the speed it can reach when in the ocean is 35 mph.

Equipped with 300 3-inch long teeth, the great white shark can produce the power of 4,000 PSI, ranking them as the most powerful sea animal by bite force measurement.

However, the bite strength depends a lot on how big the shark is. In other words, the larger the shark, the more forceful its bite is.

A great white shark is a solitary nocturnal hunter who goes out when there’s no light and stalks its prey from close to the ocean floor to remain undetected. After, it launches its vertical attack with great precision.

During the juvenile life phase, these sharks feed on fish and rays. As they enter adulthood, great white sharks primarily hunt sea lions and seals.

As a rule of thumb, white sharks eat between 1% to 10% of their total body weight weekly.

Another powerful shark specie, the bull shark (the name comes from the fish’s blunt and short snout), is known for being extremely lethal.

It’s one of the top three most dangerous shark species to humans – bad news for people living on the coast.

Bull sharks have been responsible for 69 unprovoked attacks on humans (many of which ended fatally). Some scientists say that the numbers might be higher.

It lives along the Pacific coast along the Atlantic ocean, but they are also known to be found in freshwaters. Also, unlike most species, bull sharks prefer shallow waters; hence they frequently come into contact with people.

The bite force of the bull shark is 1,350 PSI, and according to biologists, it has the greatest pound-for-pound bite force among sharks.

These powerful fish tend to clamp onto their prey instead of shredding (like most sharks do).

The bull shark usually hunts in murky waters where visibility is low. In addition, bull sharks use a bump-and-bite hunting strategy, continually bitting and tackling the prey until too exhausted to swim.

Being an opportunistic feeders, bull sharks are not picky eaters. They kill and eat other sharks, birds, mammals, and even turtles.

These deadly sharks can reach speeds of 25 mph, three times faster than the fastest Olympic swimmer.

The tiger shark weighs up to 1,400 pounds and can reach up to 16 feet in length.

Its jaws are mighty, and its 48 razor-sharp teeth allow the animal to grip the prey firmly. Tiger sharks have a combined bite force of 325 PSI and can cut through any organic material such as flesh, bone, and even turtle shells.

The hunting strategy of tiger sharks is ambush predation, which means attacking quickly and in bursts to grab the stalked prey between the deadly jaws.

Like most other sharks, the tiger shark undergoes the continuous replacement of teeth with age, growing new rows in time.

Interestingly, tiger sharks have an undeveloped palate, so they go after seals, birds, stingrays, and even car tires. This is what has been found in their stomach. Large prey is usually finished gradually over time.

According to estimations, the tiger shark can swim at 20 mph, making short higher speed bursts lasting only a few seconds.

You May Also Like: What is The Strongest Ape?

The Greenland shark is also called the ground, gray, or sleeper shark. This fish hasn’t been reported to attack humans, but one incident was registered in 1859 in Canada.

In this case, a human leg was found in the shark’s stomach.

However, the chance of this predator attacking humans is reduced to minimal as it lives in very cold habitats.

The Greenland shark weighs 2,200 pounds on average and is one of the ocean’s heaviest sharks. It can reach up to 21 feet and moves sluggishly, but this doesn’t make it any weaker than other species.

Greenland sharks move rather slowly, at only 1.9 mph. They are carnivorous and eat all types of other fish, including flounders, sculpins, eels, smaller sharks, and so on.

There’s no information on the bite force of the Greenland shark, as well as on how this fish hunts, but it’s very likely that it ambushes its prey.

Hammerhead sharks are recognized for having rather oddly shaped heads. There have been a total of 16 documented cases of hammerhead attacks on humans.

While not hostile, these sharks are still dangerous and can attack. They don’t seek to make any victim, but their space should not be invaded.

The hammerhead shark has long, serrated teeth that it uses to detect and consume food. On its head, it has electrical receptors that sense prey, even when the target is buried in the sand.

These sharks spend their time in subtropical, tropical, or temperate seas. This means they don’t travel to Arctic areas but can occur close to the coastline and along continental shelves.

When compared to great whites, hammerheads are less aggressive. They don’t attack if not provoked, preferring to pursue their prey only underwater, at 25 mph.

Oceanic whitetip sharks are voracious. If you find yourself in the middle of the ocean, then you should be worried that they’re going to attack you.

At adult age, the oceanic whitetip can weigh up to 370 pounds. Even though not as big as other species on the list, it is a pretty ferocious and powerful shark.

The bite force of this specie has not been recorded yet, but it’s known to feed on squid, cephalopods, bony fish, marine mammals, other sharks, and sea birds.

As its name says, the oceanic whitetip has distinctive white marking patterns on its pectoral, dorsal, and tail fins areas, so you can easily recognize it when in the water.

Oceanic whitetips have been almost decimated in the shark fin and fishing trade. They’re the most common tropical pelagic shark specie, so it’s only evident that they have been hunted for food.

And there you have it, with this, we conclude our article on the strongest sharks in the world.

Sharks are, indeed, powerful aquatic creatures because they weigh a lot, are incredibly sized, have deadly jaws, and swim in the deepest ocean waters, where currents are so strong.

As you have seen, the great white is the strongest of all, whereas the bull shark has the most powerful pound-for-pound bite force. Each species differs in size and has its unique way of hunting and killing.

However, they all have one thing in common – strength.

Thank you for reading. If you liked this listicle type of article, here’s another popular read: Strongest Reptile Species.