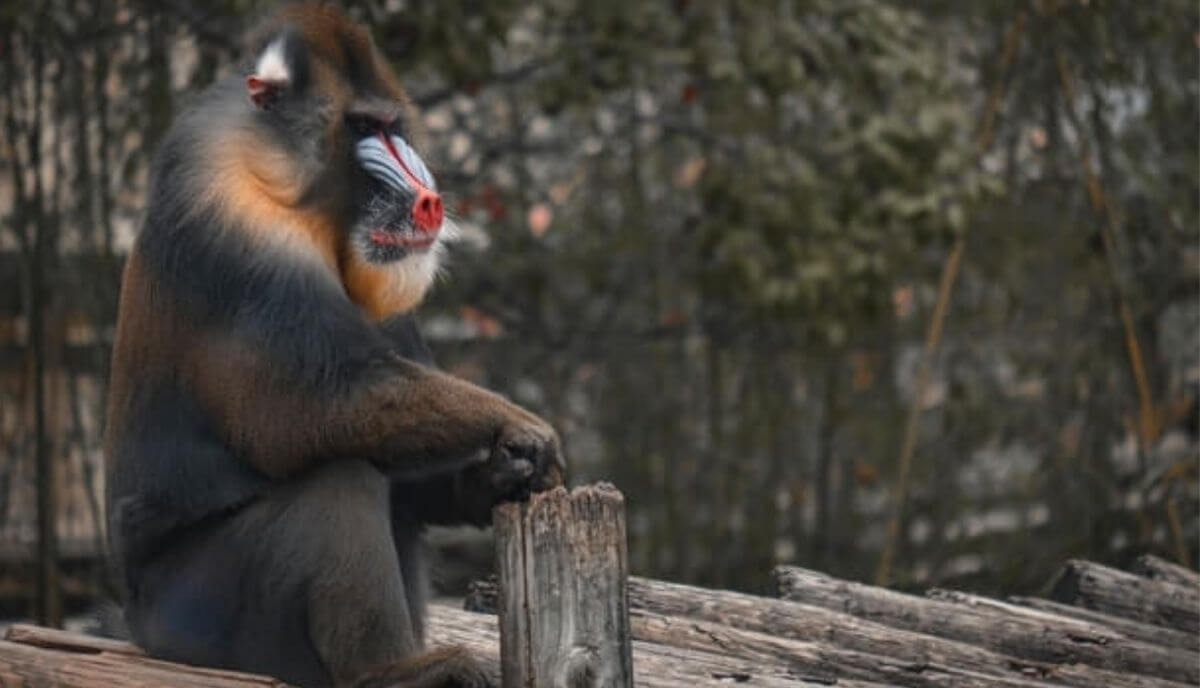 As some of our closest relatives, monkeys are often a subject of fascination to us humans. Monkeys are intelligent and impressive animals, not to be confused with their larger ape cousins.

All species live in complex societies with unique laws and forms of communication. Almost invariably, these societies, or troops, are led by a dominant male, who is deemed larger and more robust than his competitors, and, indeed, several times more than any female.

The dominant male is responsible not only for protecting his troop but also for his position as leader. For this reason, only the strongest monkeys are in charge. But which monkey species is the strongest?

The mandrill is the largest and the strongest monkey species in the world. While mandrills are the most powerful monkeys, with their sharp fangs and formidable size and build, a few other species are known to be tough because strength isn’t always what you have, but sometimes, what you do with it.

Let’s look at some of the world’s strongest monkeys and determine what makes them uniquely strong. 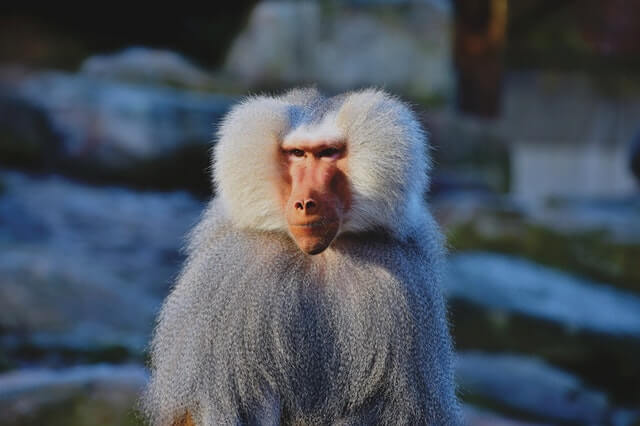 Once revered by the ancient Egyptians as a sacred animal, the Hamadryas baboon is an impressive-looking animal. They have long, silvery manes, framing their faces and running down their backs.

Males are large and robust, weighing around 66 pounds and measuring up to 31 inches in length. Though primarily herbivores, hamadryas baboons are equipped with exceptionally sharp teeth.

While a group of hamadryas baboons may be physically capable of defeating some of their predators, such as leopards or wild dogs, they typically don’t risk it and would rather flee. This does not mean they are not aggressive, however.

Read Also: How Strong Are Baboons?

Hamadryas baboons have a complex social structure, and groups can be gigantic, sometimes up to hundreds of individuals. As such, dominant males are under a considerable amount of pressure to maintain order and protect their position.

They, therefore, rule with an iron fist, punishing anyone who steps out of line in an almost despotic manner. 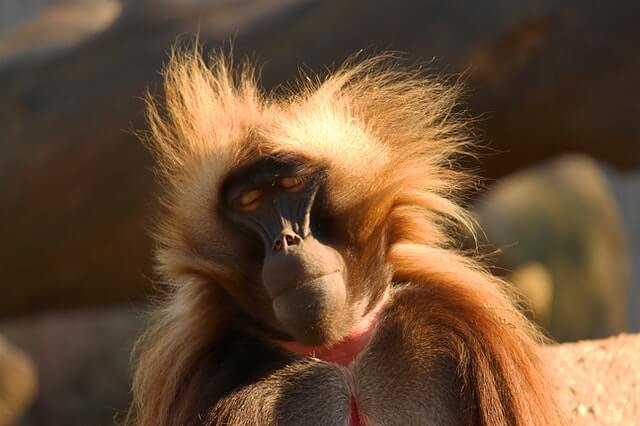 Geladas are found only in the high grasslands of Ethiopia. These majestic creatures are almost lion-like in appearance, with long golden-brown manes and exceptionally long fangs.

They are powerfully built, weighing up to 47 pounds, while their length is 20 to 30 in.

Despite their scary appearance, geladas almost exclusively eat grass and other plants, spending nearly all of their time grazing or grooming.

This does not mean they are docile, however.  As with many other primates, gelada troops are led by a dominant male, who is in constant competition with others attempting to take his place.

Male geladas often have to face groups of 7 or more rival males at a time.

Even being clearly outnumbered, the dominant male will generally not back down, and fights can be brutal, sometimes endangering other troop members.

Yet, male geladas are not the only ones who will fight against a more powerful adversary; females will often punish much larger males if their young have been endangered, bearing their massive fangs and even attacking them in groups.

Sometimes, size isn’t everything! And that’s particularly true for the strongest animals in the jungle! 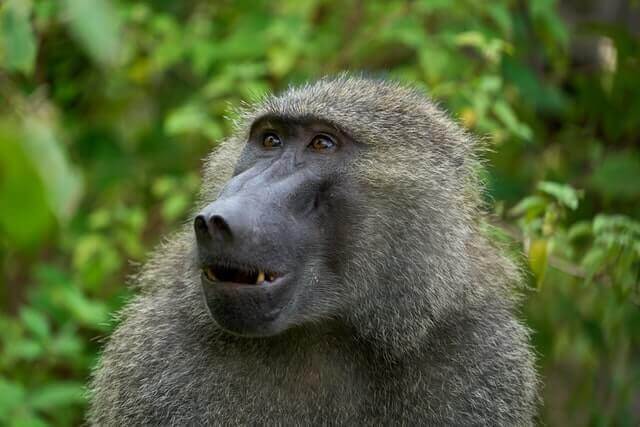 The chacma, or Cape baboon, is the longest monkey in the world. They are tall and long-limbed, less compact than some of their cousins.

They can grow up to 3ft9in. in length and weigh up to 100 pounds. While they are not the strongest monkeys in their world for their size, chacmas are fast and agile, running at over 35mph.

Cape baboons are also armed with long, sharp canines, growing over 2 inches long, which they use to attack, defend and intimidate. Arguably the baboon’s most impressive feature is their fearlessness.

In the wild, baboons are frequently attacked by wild dogs, hyenas, and lions, all much larger and more powerful animals. However, baboons are no cowards and do not back down easily.

Large males have been seen facing down and chasing big cats, such as cheetahs, leopards, and even lions, sometimes on their own. Baboon troops also work cooperatively to chase away or injure these predators, relentlessly pursuing them until they are sure they will not return.

Groups have even been recording attacking massive Nile crocodiles to help their companions escape their jaws.

Related: How Dangerous Are Baboons?

Worryingly, baboons frequently come into contact with humans, particularly in areas frequented by tourists, who enjoy feeding the females and young. This encourages baboons to associate humans with food and enter human settlements.

In some regions, baboons are known to mug people, break into their homes and chase them out! Perhaps tourists would think twice about getting so close if they knew what these courageous monkeys were capable of. 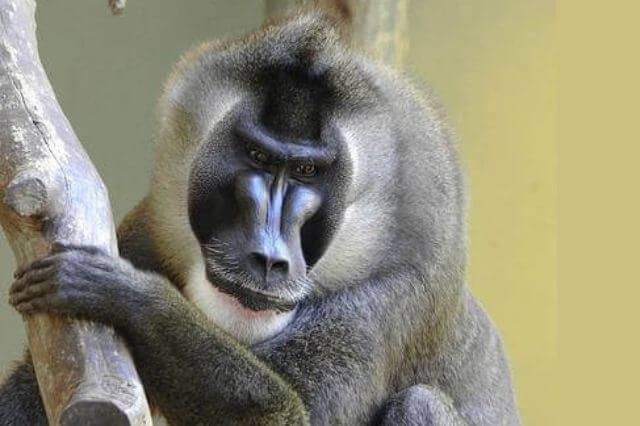 Drills are large short-tailed monkeys found in remote forests of Africa. Though slightly smaller than its cousin, the mandrill, the drill is still a considerable big monkey, weighing up to 110 pounds.

These monkeys are powerfully built, with muscular bodies and limbs and 2-inch canine teeth.

Although they look formidable and are undoubtedly strong, drills are actually shy and peaceful animals.

Unlike baboons, when faced with the option to fight or flee, drills will generally choose the latter. They consume mainly fruit and rarely prey on anything larger than a crab.

Drills are also endangered, mainly due to poaching and habitat destruction.

Their shy temperament means they typically do not do well in captivity, and breeding them is difficult. This means that not much is known about them, and we are running out of time to find out. 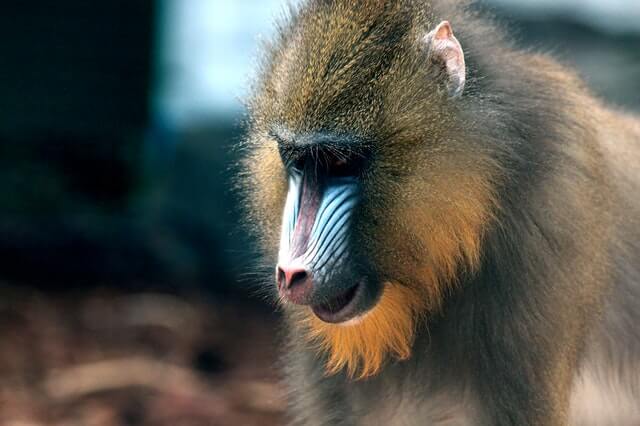 Finally, we have the world’s strongest living monkey, the mandrill. While they are not the tallest monkey, at around 37 inches, they are incredibly compact and muscular.

Male mandrills can reach a whopping 120 pounds of mostly lean muscle! For their size, they are far more robust than any human.

They have impressive canines, measuring over 2.5 inches long, which they display to intimidate adversaries (usually very effectively). They also use these teeth for feeding and will bite the nape of the neck of larger prey, such as small antelope or even crack open tortoise shells.

This is not to say mandrills, particularly the young, do not face a number of natural predators themselves. Smaller individuals may be preyed upon by eagles, pythons, and leopards.

However, large males will defend their horde fearlessly and can even fend off leopards, which are formidable apex predators.

Though they are generally considered shy, quiet animals, they can be fearsome foes when provoked. Mandrills are also highly social and protect one another.

Related: How Dangerous Are Mandrills?

While male mandrills are solitary sometimes, they can live in hordes of up to several hundred individuals. The largest horde ever recorded was around 1300 mandrills!

You wouldn’t want to get on the wrong side of one of them!

While mandrills sit at the top of the world’s strongest monkey species, it is clear that strength comes in many forms, and there are certainly a few other monkeys worth mentioning. Mandrills are the heaviest and most physically powerful but shy and generally peaceful.

On the other hand, Chacma baboons are longer and considerably more aggressive.

Hamadryas males are positively tyrannical, which one would need to be in order to keep such a large group in line.

Geladas are undoubtedly challenging, but their females are perhaps even tougher!

Despite being the second-largest monkey, being very strong and equipped with impressive teeth, the drill appears to be the only monkey who neither wants to be aggressive nor needs to be strong.

And there you have it. With this, we have concluded the “strongest monkey species in the world?” article. Thank you for reading!

Hopefully, this read was informative and fun. For the very end, here’s a recommendation of a similar article: Strongest Gorilla