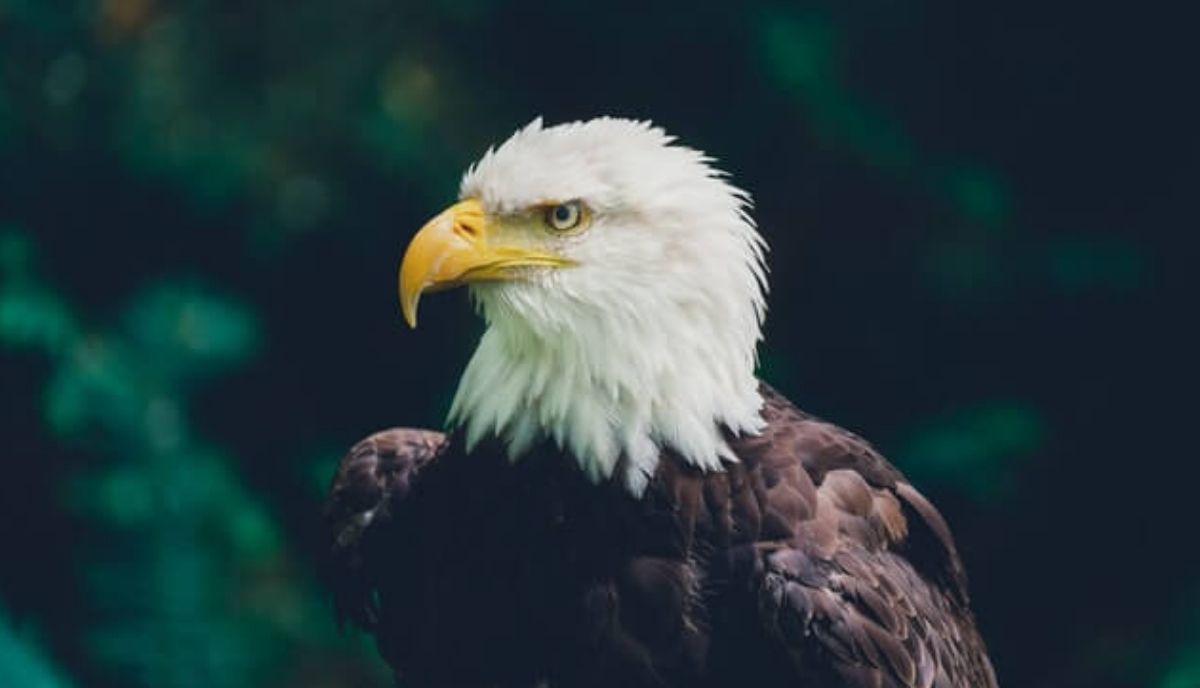 Birdwatching has been something I’ve been contemplating lately. However, I never got the chance because of the current situation.

One buddy of mine had the opportunity to do so. He was excited to share photos of the bird he spotted. One of the birds he saw was the Philippine eagle.

After doing some research, I found next:

As one of the largest and deadliest birds of prey, the harpy eagle is the strongest pound-for-pound bird on the planet. Harpy eagles have immense power, and they are able to produce 530 PSI (pounds per square inch) talon grip squeeze, which is powerful enough to crush a human hand.

However, there are many other strong birds besides harpy eagles. Let us get to know nine of them with this list! 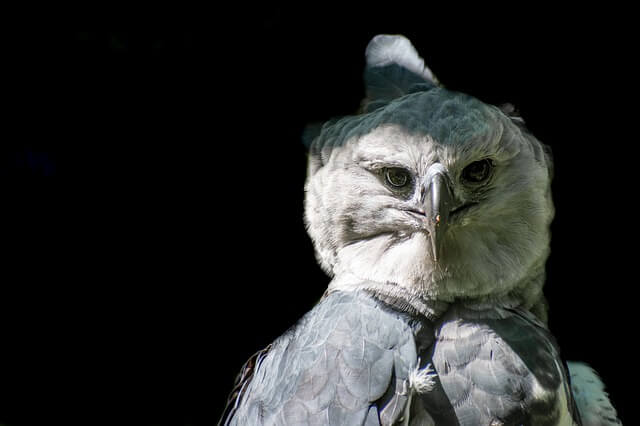 Found in the rainforest of South America, harpy eagles have a reputation for being deadly hunters. This 3.2 feet bird weighs 13 pounds and has an average wide wingspan of 5.7 feet.

With their unique build, harpy eagles can fly up to the speed of 50 miles per hour. By utilizing the force of their talons, harpy eagles kill their prey by crashing their bones, instantly killing their target.

These powerful birds prey on tree-dwelling animals, such as sloths, opossums, and monkeys.

The harpy eagle also uses its size and talon to defend itself from their main enemies – humans and big cats.

In 2010, a BBC cameraman became unconscious after being attacked by a female harpy eagle. Another crew member nearly lost his kidney after being grabbed in the stomach.

However, It is rare to spot harpy eagles in the wild. Locating the harpy eagle’s nesting site can increase the likelihood of seeing them.

One can immediately recognize them with their distinctive discoloration. Harpy eagles have a gray head, black wings, and white underside, and their legs are also white with black stripes. 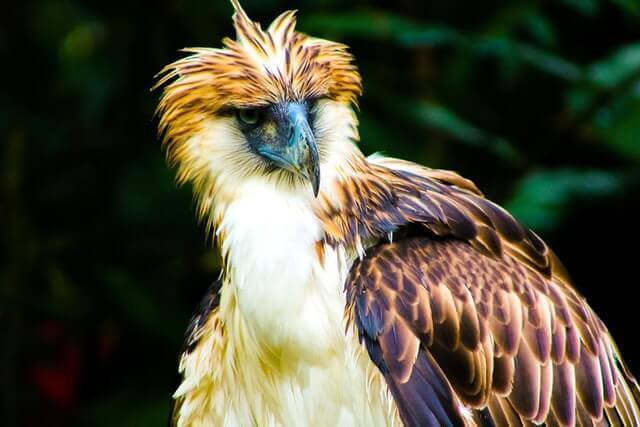 The Philippine eagle is another monkey-eating eagle found in the lush forests of Philippine Island. It is easy to distinguish it from other eagles due to its brown and white feathers and shaggy crest.

Although not the heaviest eagle, the Philippine eagle is the biggest in terms of wing size. It has an impressive wingspan of 7 feet 3 inches while weighing only up to 17 pounds.

The Philippine eagle is one of the strongest eagle species in the world. They can fly up to 62 miles per hour, which surprises anyone that passes its path.

Besides monkeys, the Philippine eagle preys on other birds, flying squirrels, bats, and snakes.

It does not care whether it preys on a large or small animal as long as its strong claw can grab it. Anything with a heartbeat is a potential target for these raptor birds.

The monkey-eating eagle also uses its speed and strength to protect itself. Although it can easily defend itself, the Philippine eagle’s biggest threat is human activity.

People hunt for the Philippine eagle for its rarity. At the same time, people continue to destroy forests, causing the loss of the eagle’s habitat.

It is estimated that there are only 400 Philippine eagles left in the wild. The Philippine Eagle Foundation was founded in 1987 to ensure the protection and conservation of this rare specie. 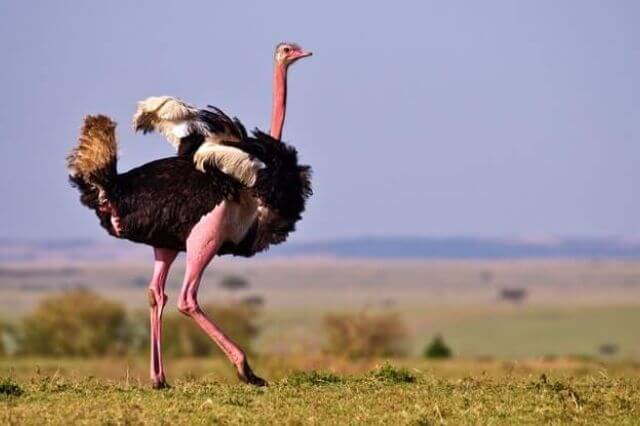 Even though it is not a true hunter, the North African ostrich is known to be fierce and strong, and it will not hold back when provoked by anyone.

This 9 feet tall bird weighs 340 pounds. Although heavy, the North African ostrich can run up to 45 miles per hour. They run fast due to the recoil of elastic energy stored in their tendons, requiring lesser muscle power.

Being a prey of different apex predators, the North African ostrich is prepared to defend itself using its two-toed feet. Their weaponry is so powerful it can kill a lion with only one well-placed kick.

The North African ostrich is an omnivore but mainly consumes leaves, seeds, and roots. However, they are not picky and will eat anything, including insects, snakes, lizards, and rodents.

Ostriches will also not shy away from consuming sands and pebbles. Although concerning, this practice actually helps the North African ostrich to grind their food in their gizzards.

Besides being athletic birds, they are also admired for their iconic black and white feathers. The male North African ostrich has reddish necks and legs, and in contrast, female ostriches have grayish necks and legs. 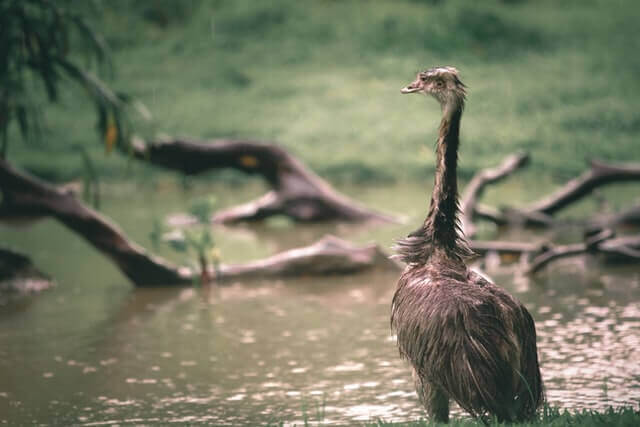 Standing at 5.7 feet, the Emu is the second largest bird globally in terms of height. The Australian native weighs an average of 121 pounds, while a female emu usually weighs 11 pounds heavier than males.

Emus’ main feature is their soft grey fluffy feathers. Unlike other birds, emus do not have tiny barbs in their feathers, and the absence of these spikes also makes the feathers flexible.

Similar to its cousin, the ostrich, emus have a plant-based diet. Emus’ meal depends on the season. It usually eats flowers and seeds during summer and spring, and in winter, they rely on herbs.

However, ostriches are also omnivore birds, and given the opportunity, they will eat different animals such as insects and arthropods.

As for their strength, emus have solid legs and lethal kicks that are powerful enough to destroy metal fencing. These leg kicks are the first line of protection against predators.

Although a large and threatening bird, emus are a target for dingoes. Ostriches will also use their muscled legs to leap quickly in order to avoid predators from reaching for their necks.

Although rarely, emus have been documented to attack humans. 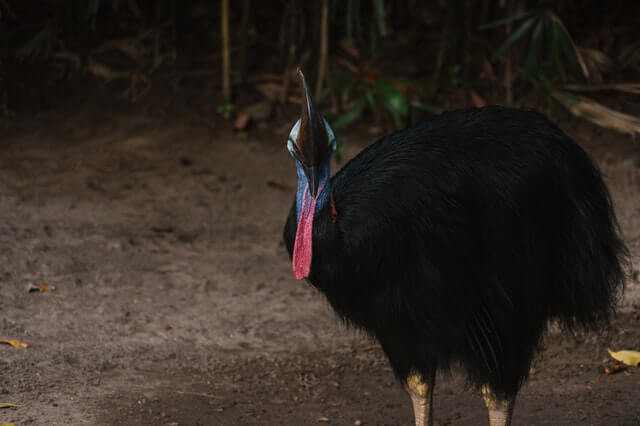 The cassowary is another set of popular flightless birds native to the forests of Papua New Guinea, Indonesia, and Northeastern Australia. Cassowaries are easily distinguished from other birds for their stark appearance.

The cassowary has a blue head and neck, with red, orange, or black colors in the mix. It also has a casque called a helmet, and such casque is covered with keratin, similar to the composition of human nails.

Interestingly, it is still uncertain the purpose of the casque on the cassowary’s head. There are suggestions as to why, including it being a sexual characteristic.

This 5 feet bird is also an agile and speedy creature. Even though it lives in a dense forest, cassowaries can run up to 30 miles per hour.

It also has the ability to jump up to five feet in the air and even swim very proficiently!

Even though they are not natural predators, cassowaries are still hazardous animals. In fact, they are often described as ‘the most dangerous birds.’

Like their flightless relatives, ostriches have three-toed feet, which they use to protect themselves. The cassowary’s natural predators include phytons, dingoes, quolls, and crocodiles. 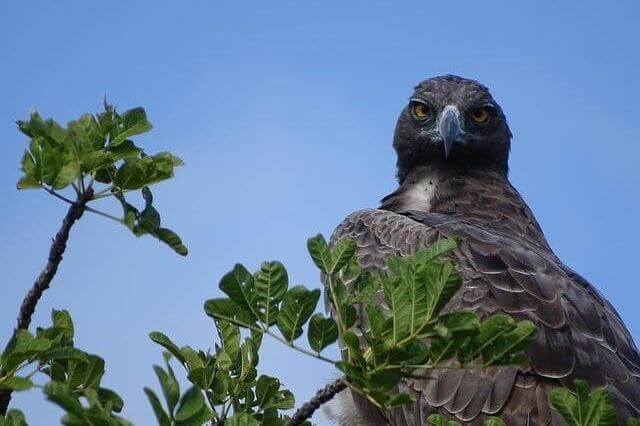 The martial eagle is considered the largest and the most powerful bird of prey in Africa. It has an average length of 2.8 feet, weighing around 8.7 pounds to 9.3 pounds.

These air predators have dark feathers that may appear blackish or grayish depending on the light condition. They are distinguishable from all of their relatives with their deep yellow-colored eyes.

The martial eagle also differentiates itself from other raptor birds by having various hunting tactics. However, most commonly, it swoops down on its target from above at frightening speeds, killing its target in mid-air.

Martial eagles can fly up to the speed of 142.9 miles per hour, souring up to a height of 18,000 feet above sea level for hours.

This mighty eagle is a carnivorous predator that preys on mammals, reptiles, and birds. They are picky and will hunt even dangerous animals such as venomous snakes, monitor lizards, and medium-sized wild felines.

However, despite its enormous speed and strength, the martial eagle is critically endangered. Unfortunately, its most significant threat is human activities, and farmers treat them as pests for stealing livestock.

Hunters also enjoy hunting martial eagles for their rarity. It did not help that humans continued to take over their habitat, which destroyed the eagle’s home. 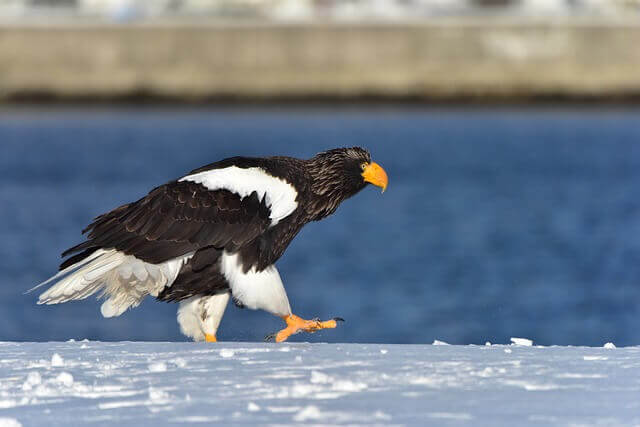 It distinguishes itself from other birds with its dark brown plumage and white wings. Unfortunately, the steller’s sea eagle’s colors make it more easily spotted by hunters.

Although it does not have natural predators, the steller’s sea eagle’s nests and hatchlings are preyed on by mammals and crows.

The Steller’s sea eagle is also considered the heaviest eagle globally, weighing up to 20 pounds. However, in terms of different measurement standards, it falls behind the harpy eagle and the Philippine eagle.

Aside from its weight, the steller’s sea eagle has an impressive eight feet long wingspan. Their wings allow them to fly 30 miles per hour, but they can dive at speeds of over 140 miles per hour.

This heavy eagle preys on fishes, specifically trouts and salmons. It hunts fishes only along in the shallow parts of the water.

The Steller’s sea eagle is a solitary bird and hunts alone. However, they are seen to flock together during August and September because of an increase in fish. 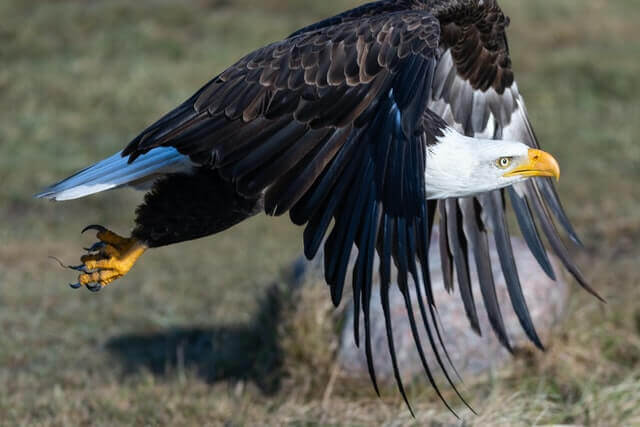 The bald eagle is a well-known bird of prey that prosper in the regions of North America. It received notoriety for being the United States’ emblem. The bald eagle was selected because it symbolizes strength and freedom.

The bald eagle has the iconic white-colored head and neck, brown-colored body, and yellow beak and eyes. Their eye color variations also make them easily identifiable.

Fortunately, this majestic bird does not have any natural predators. However, their chicks are preyed upon by bobcats, bears, raccoons, and other large birds.

Like its cousins, the bald eagle is surprisingly strong for its size. They have a grip strength of 400 pounds per square inch, which is ten times stronger than a grip of an average adult person.

The bald eagle is also quite a fast and agile raptor. With an average speed ranging from 74.5 to 99.4 miles per hour, it uses its swiftness to steal food from other eagles and birds of prey.

Besides being hunters themselves, bald eagles also feed on carrion during the cold months when food is hard to find. 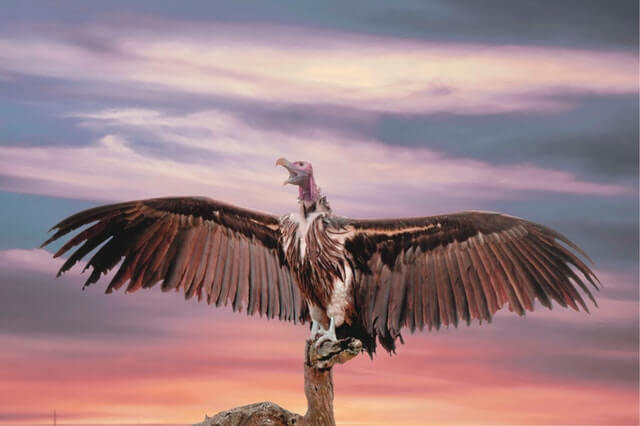 Vultures are scavenging birds, and they almost exclusively feed on carrion or leftover meat. And the lappet-faced vulture is no exception to this scavenging habit.

The lappet-faced vulture has the largest and longest winged vulture, making it one of the most robust birds in Africa. It has an average body length of 3.1 to 3.7 feet and a wingspan of nine-feet wide.

Another distinguishing characteristic of the lappet-faced vulture is its massive beak. This large vulture can fly up to a speed of 30 miles per hour.

It usually soars up in the sky to save energy, but at the same time to hunt for its next meal. The lappet-faced vulture has a pair of keen eyes that can spot a carcass over a mile away.

Although they scavenge, for the most part, the lappet-faced vulture sometimes hunts small prey, such as reptiles, small birds, fishes, and small mammals. Unfortunately, its population is in steady decline.

People have been poisoning and persecuting vultures. Besides the intentional killings, the vulture is subject to collision with power lines and electrocution.

Then, they experience massive habitat loss due to human activities. Unfortunately, even during their breeding, the lappet-faced vulture is being disturbed.

And because of these activities, the lappet-faced vulture is considered an endangered species (among many other species).

The harpy eagle takes the title of the strongest bird in the world. Although not the largest one on the list, the harpy eagle proves that it deserves this recognition with its strength, speed, and skills.

However, each and every bird from above has its strengths and weaknesses, earning its spots in our list of strongest birds in the world.

Unfortunately, many of these birds are not entirely safe, even with their great physical features. And to be even sadder, most of their population decline and habitat loss is caused by human activities.

If you like this type of post, here’s a recommendation of another popular article: Strongest Gorilla Species