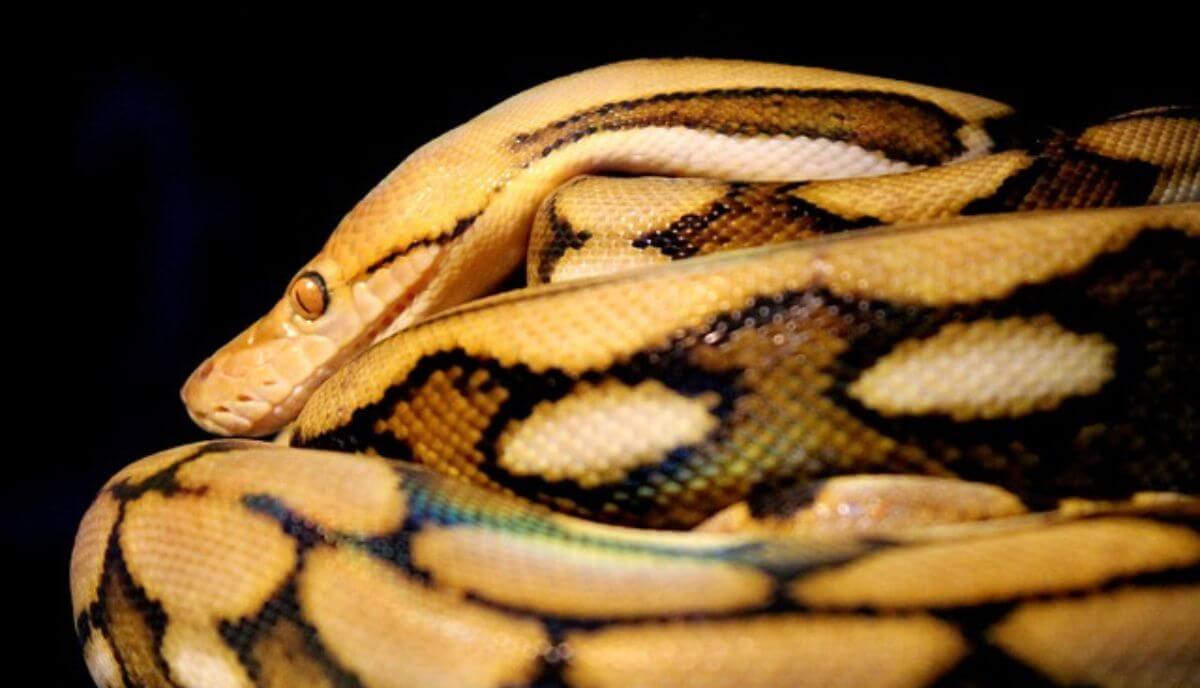 You’ve probably heard stories of humans being eaten by snakes, and you might be wondering if these are actual incidents.

So, which snakes can eat people, if any?

Well, It’s true; some snakes are indeed capable of eating humans. The only snakes on the earth that can swallow and digest a human are African rock pythons, Burmese pythons, green anacondas, and reticulated pythons.

Each of these four snakes will be discussed in detail, along with information about their habitats, frequency of human predation, and other relevant details.

There are more than 3,000 different species of snakes around the globe, with sizes ranging from a few inches to more than 30 feet.

Amongst all of them, there are only four snakes that are capable of eating humans.

African rock pythons are the largest snake species in Africa. These constrictors can grow up to 14 feet and can weigh a massive 200 pounds.

It is a no-brainer that these non-venomous snakes can attack and kill just about any size of prey – including humans.

An African rock python has an hourglass-like shape – its head being small-sized triangular shape, gradually expands as it progresses down the body and loses its size as it approaches its tail.

Their muscular bodies are covered in olive, brown, and dull yellow scaley camouflage skin, the perfect disguise to creep up on prey for a stealth attack.

Although residing in populated areas of sub-Saharan Africa, there have rarely been any reports of African rock pythons attacking or eating humans.

However, in 2002, in Durban, South Africa, a 10-year-old boy was reported dead and swallowed whole by an African rock python. (source)

Much more recently, in 2013, an African rock python escaped its pet owner’s store and strangled two boys to death in their bedroom in New Brunswick, Canada.

Other than these two documented reports, there have been several unverified reports of African Rock pythons attacking and eating humans. 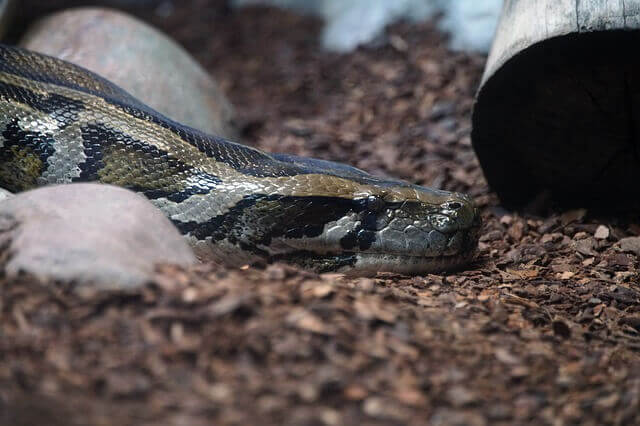 Native to Southern and Southeastern Asia, Burmese pythons are one of the largest snakes in the world. They live in swamps, marshes, woodlands, and like most snakes, any area with a body of water close by.

Burmese pythons have much bolder and lighter yellow markings on their dark skin than the African rock python. These snakes’ standard length and weight are 13 feet and 64 pounds, respectively; however, these can be exceeded.

As is characteristic of most giant snakes, Burmese pythons are non-venomous constrictors snakes. They overpower prey by constricting them to death before swallowing them whole.

In general, these pythons feed on birds and small mammals.

However, large individuals are known to kill and eat prey as large as deer, goats, and even alligators – killing and eating a small to medium-sized person will not pose a problem.

Luckily, attacks on humans by Burmese pythons are rare, and there are only a few fatal incidents.

In 2008 in Venezuela, a zookeeper was killed and almost swallowed. But other than this, there are no other confirmed cases of Burmese pythons eating humans.

Perhaps it could be because they are found in rural settings. In Florida, where they live as invasive species, it is almost certain that there are no reported deaths by swallowing.

Many movies have been produced over the past few years with the green anaconda, and every anaconda – including make-beliefs – posing as the ferocious man-eater.

Although these movies may have been exaggerated; however, the basis of their claims is not so far-fetched because green anacondas are indeed snakes that can swallow a human.

These giant reptiles are native to the swamps and marshes of the South American continent.

Green anacondas are the world’s largest snakes weighing up to 550 pounds, and are the second longest after the reticulated python spanning 15 – 17 feet.

However, some individuals can reach up to 30 feet in length!

Besides their enormous size, green anacondas are distinguished by greenish-olive-colored skin with organized dark oval patterns along their upper body.

A green anaconda’s diet consists of medium-large mammals, reptiles, birds, and fish. Living deep in the jungles, having a snake-human encounter is a rarity.

And while there have been many reports of people being eaten by an anaconda, most of such incidents haven’t been verified.

However, based on their size, weight, strong muscles, and diet, it is clear that a green anaconda is capable of eating a human.

One risk taker wanted to know for himself if he could be eaten by an anaconda and tried to feed himself to one – his mission was ‘successful.’ 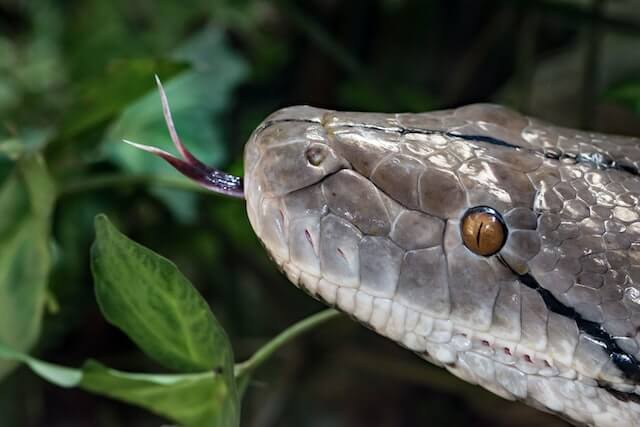 The reticulated python is the most notorious of all the snakes on our list. These pythons have the most recorded cases of all constrictor snakes attacking, killing, and eating humans.

Reticulated pythons are native to Southeast Asia and are most commonly seen on plantation farms or in thickly dense forests.

With the title of the longest snake in the world, an average length of a reticulated python ranges from 16 – 21 feet, weighing up to 300 pounds.

However, just like anacondas, these pythons can grow over 30 feet in length.

The skin of a reticulated python has a shade of yellow, black, and white patterned in a net-like format.

Reticulated pythons are extremely dangerous and aggressive to human beings. Encounters with these reptiles can be fatal.

In 2018, an Indonesian woman was swallowed by a python that sized a whopping 23 feet. In the same year, reticulated python snakes ate two more people.

They are known to attack plantation workers, zoo keepers, garden owners, and even drunk people.

In the past, these giants have attacked a tribe of small people on the main island of Luzon in the Philippines, leaving a handful injured and some dead.

Unfortunately, these attacks will keep increasing as our environments deteriorate. However, despite their bad rep, some snake-lovers still keep reticulated pythons as pets.

If you’d notice, all snakes on our list are very long, heavy, or both. You’ll also notice that they are non-venomous, which is the best weapon a snake can have for killing.

Lacking the venom would be equivalent to declaring vegetarianism. Yet, another adaptation—the size—made up for the loss.

Because of their enormous proportions, constrictors utilize their size and strength to capture, overpower, and devour prey that is as huge as an adult human.

The constricting ability allows snakes to subdue and kill prey by literally squeezing the life out of it.

The length and breadth of a large snake are covered in powerful muscles that can damage and break a human or any other mammal’s bones. Not only do constrictions crush the bones of the victim, but it also strangles them.

Once a constrictor has its body coiled around the body of a victim, or a part, all it does is close any room for the chest to expand and take in air.

With every breath the victim takes, the snake’s grip tightens until there is no more space to suck in air, causing the victim to die from asphyxia.

However, in most cases, the victim dies from lack of blood circulation rather than asphyxia.

You might be curious how these snakes, despite their huge size and strength, are able to fit the victim’s heads and shoulders inside their throat without tearing their mouths apart.

First, the snakes on our list have a feature that most carnivores don’t, a flexible jaw. The upper and the lower jaws are joined by very thin membranes, which allow the snake to open its mouth wide to a whopping 180 degrees angle.

With the jaws and the skull having lesser bones, a constrictor can move its jaws back and forth, all four jaw arches moving independently, chugging the victim slowly into its body.

On the other hand, the typical carnivore can move only the lower mandible with the upper mandible in one position.

All snakes have teeth — a valuable and adaptable weapon. The teeth (fangs) of venomous snakes act as needles for injecting venom into their victims.

On the other hand, since lacking venom, a constrictor snake employs their teeth for a different purpose. As its target struggles to defend itself, the predatory snake will hold its prey in place with its curved teeth.

In other words, the curved back teeth act as a death cage holding the prey down and rolling them into their mouth bit by bit.

Snakes swallow their food whole. Once the prey gets into the esophagus, the walls of muscles will urge the body further into the stomach.

By this time, digestive enzymes are already working to digest the body. If the snake successfully gets the shoulders of a human victim to pass the mouth and enter the body (as unusually large prey), it will use its ribs to crush the body further to make the process faster.

Every element of the victim’s body, even the bones, can be broken down by the snake’s stomach’s pH levels. However, given a person’s size, it would require more time to digest the body completely.

Yet, by strengthening cardiac muscles and the circulatory system, which causes the body to pump more blood than usual, constrictors can shorten digestion time and enhance digestion speed by three times.

FAQs on Snakes That Can Eat People

In this section, we’ll address some additional queries that you might find interesting.

Yes, adult constrictor snakes can eat humans whole. As previously indicated, there have been multiple confirmed incidents of people being swallowed up by a snake. However, snakes that tend to attack people as a food source (which rarely happens) are usually enormously big individuals.

How Often do Snakes Eat Humans?

It is impossible to pinpoint precisely how frequently and how many humans have been eaten by snakes, even though multiple instances have been reported. Children, women, and smaller men are commonly involved in fatal accidents.

Still, despite all the incidents, snakes rarely eat humans, as we are not on their regular menu. Humans are much bigger and broader than their usual prey, as most snakes capable of eating humans primarily feed on small to medium-sized mammals, reptiles, and birds.

Can You Survive Being Eaten by a Snake?

No, you can’t survive being eaten by a snake, as snakes firstly strangle their prey before swallowing. But, if you can quickly extract yourself from the snake’s fatal grasp, you may be able to survive.

Yet, even if you manage to escape, the result of the crashed bones and organs could cause deadly injuries.

Even though many people are scared of them, constrictor snakes actually see humans as a threat rather than a food source. Additionally, only the huge adult snakes have the capacity to ingest humans.

Plus, humans are not the favorite meals of constrictors. So, the chances of you getting eaten by these snakes are very slim. In fact, a person has a lower risk of being eaten by a snake than struck by lightning.

However, snakes are wild animals, and their behavior cannot be predicted; it would be in your best interest to stay away as far as possible from them.

With this, we conclude the articles on snakes that eat humans. Thank you for reading!

If you liked this blog post, here’s another popular read you might find interesting: Strongest Reptiles in the World.