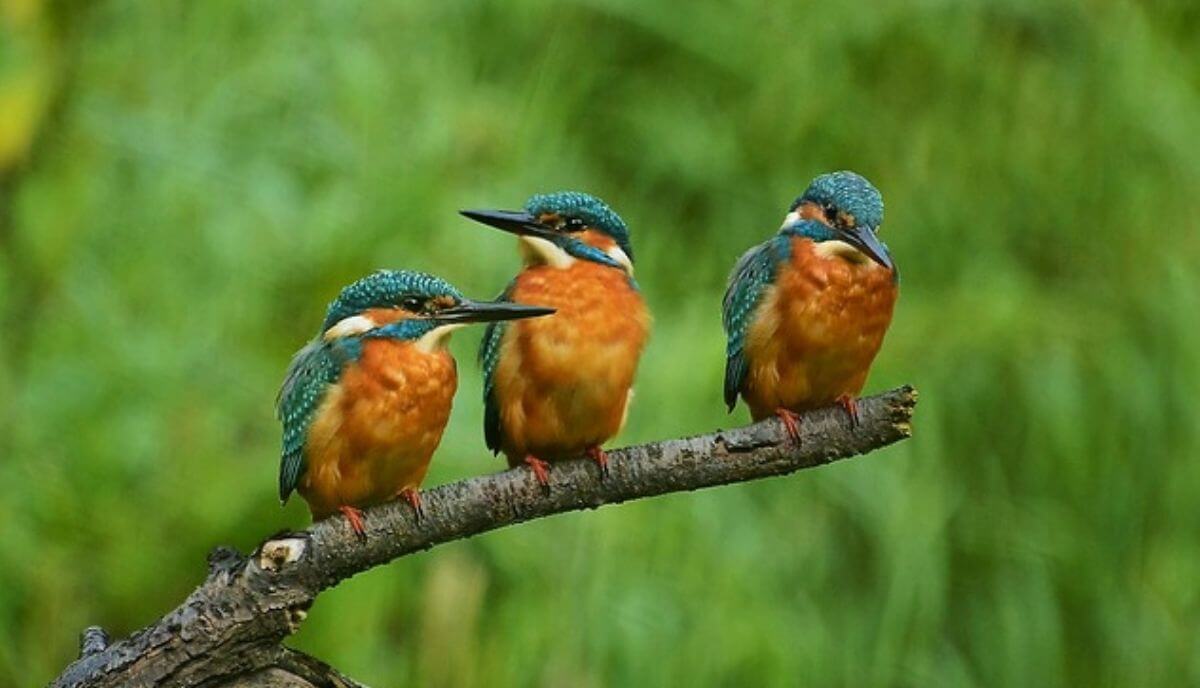 Did you know that birds evolved from a group of dinosaurs called theropods? It might be impossible to believe this, especially after looking at some of the smallest birds known to humans.

From the smallest to the most dangerous birds, from long beaks to the most colorful birds, nature has it all for us! There is a reason why birdwatching is a beloved hobby of many.

Today, we’ll be discussing small birds with long beaks. These birds are usually a little timid but are known for their curiosity.

Here is a list of some popular small birds that have long beaks: 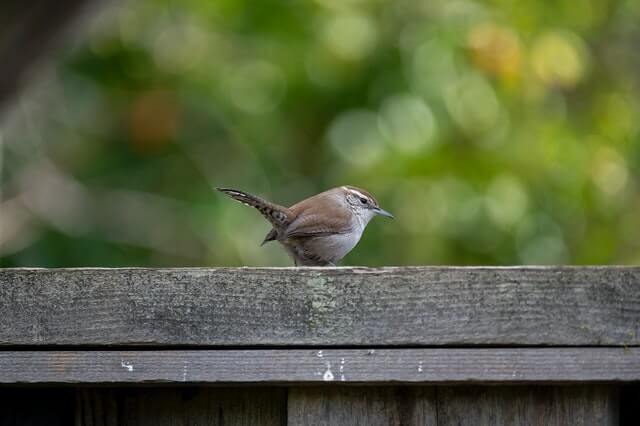 The top of their body is a rusty brown that fades to whitish-grey color on their underparts. Combined with the long tail and white spots on their face, they give quite a feisty image.

Their voice and songs vary according to the region they are inhabitants of. For example, in the west, their voice is called a ‘mystery song.’

While these tiny birds with long beaks are frequently seen near human habitats, they usually live in shrubby areas near woodlands and can also be found near streams. 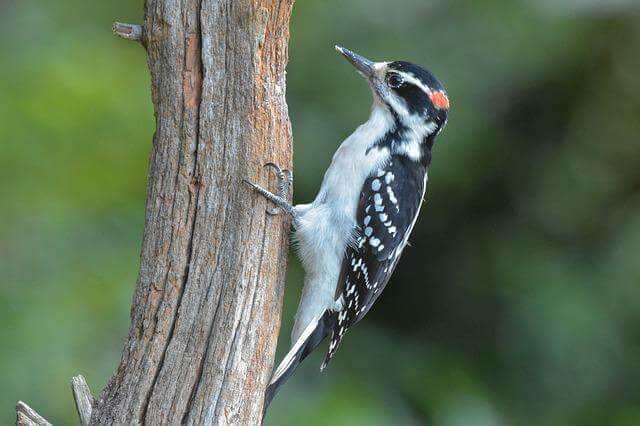 These small birds with big beaks primarily inhabit coniferous forests and woodlands but can also regularly be seen in parks and gardens.

Hairy woodpeckers mostly have a black upper body and wings with white or grey spottings, while the throat and belly can be from white to a light brown.

Their head has two white bars below and above their eyes; however, unlike females, males have red patches on their heads. 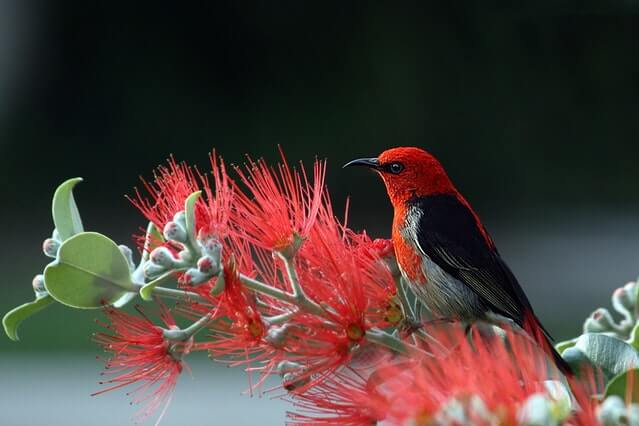 Scarlet honeyeaters are a sexually dimorphic species. While males are a striking red-colored with some black and white, females are entirely brown with white underparts and a little bit of red.

As a result of their gorgeous bright red color, they are also called blood birds.

In comparison to the other species, scarlet honeyeaters are more vocal with a variety of different calls.

Males have a tinkling, descending call, and this tinkling and bell-like sound is a clear giveaway of the presence of these eccentric birds. 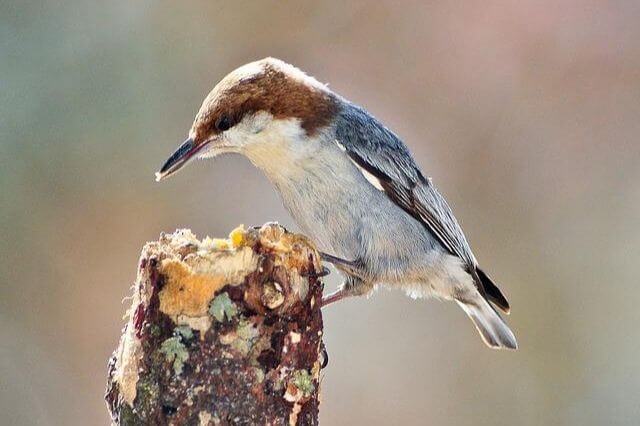 As the name suggests, they have a brown head, with the upper body being a dark grey or black and the underbody being whitish.

The sound brown-headed nuthatch makes closely resembles the whee-hyah of a rubber duck. However, they can also make a softer pit-pit sound and other more squeaky sounds when fighting.

Hummingbirds are American native birds with around 362 species, most of which are found in the tropics.

The smallest of the hummingbirds is the bee hummingbird, while the sword-billed hummingbird (from the photo) is the bird with the longest beak in the world in relation to body length!

They are known as hummingbirds because of the peculiar humming sound they make when they flap their wings at a high frequency to fly. Interestingly, they are the fastest birds relative to their size, reaching 150 body lengths per second.

Hummingbirds also show sexual dimorphism as they show differences in size (males are smaller than females).

The songs of hummingbirds are primarily chirps, squeaks, whistles, and buzzes. 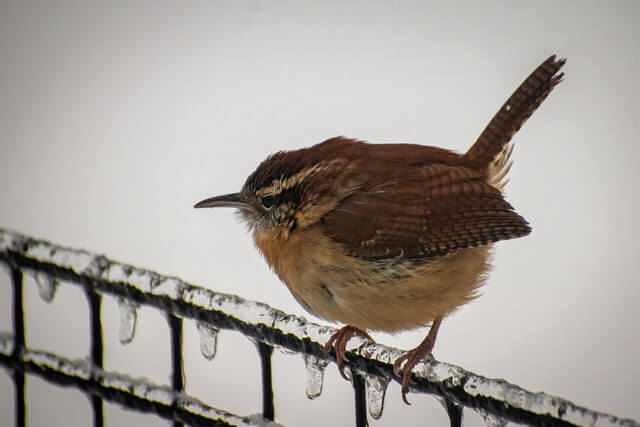 A brown shade is seen at the top of these birds, which fades into a grey and pale shade of brown for their underside. In addition, they have dark brown plumage throughout the body, neck, and tail, too.

Despite their name, winter wrens, during winter, find retreat in small, snug, and dark places like caves. 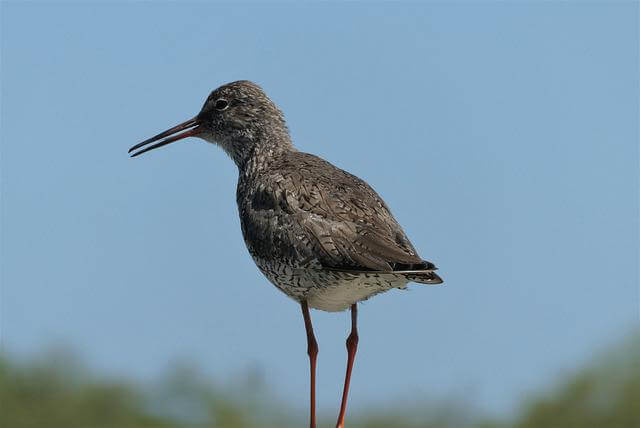 The common redshank is widely seen in temperate Eurasia, and they are a migratory species that can be found in South Asia, the Atlantic coast of Europe, and the Mediterranean.

Compared to the other birds mentioned before, common redshanks are relatively bigger because of their slightly longer neck and legs. The size of their black-tipped beak is 3 to 5 cm long. 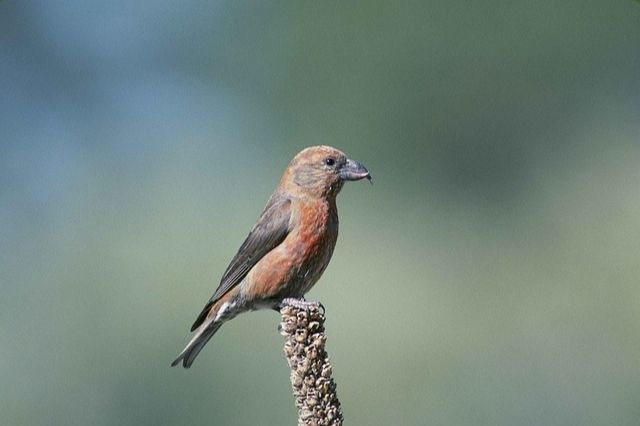 Red crossbills are around 10 to 16 cm long, with a 27 to 29 cm wingspan and 40 to 53 grams of body mass. Males are primarily red or orange, while females are yellow or green.

Their most special characteristic is the mandibles crossing at their tips which they use to separate conifer cones and extract the seeds from within them, which are their primary food source.

Red crossbills have wedge-shaped bills, a shape that is typically for seed eater bird species. 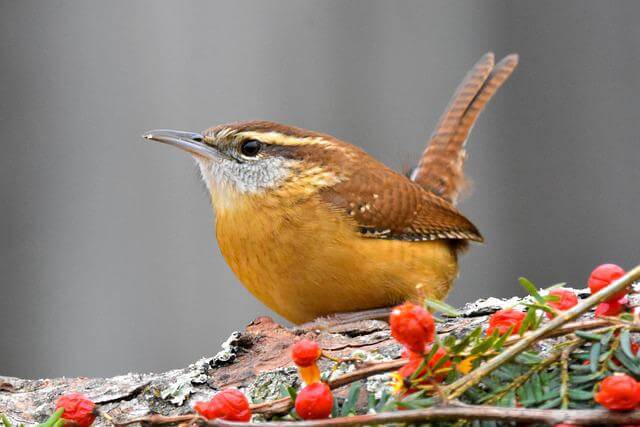 The Carolina wren is one of the larger varieties of a wren with a body length of 12.5 to 14 cm and a 29 cm wingspan.

Their upper part is brown, and so are their wings with white and black streaks. At the same time, their underbelly is a more golden brown, almost yellowish.

Also, Carolina wrens have a yellow bar above their eyes that makes them look feisty because of the illusion of them having eyebrows.

Their songs can be heard throughout the year, expert for days with harsh weather conditions. Usually, males are the ones who sing, especially during the mating season. 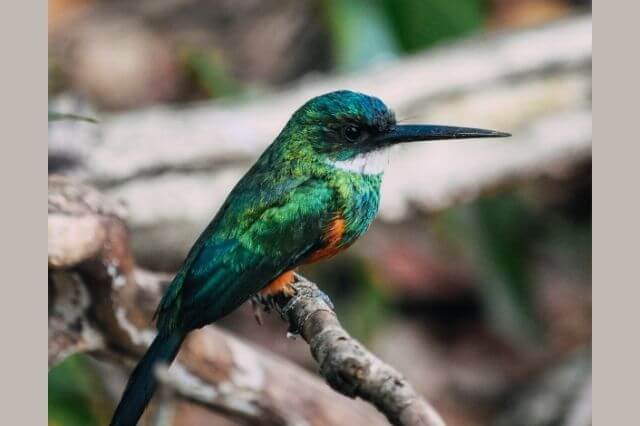 Rufous-tailed jacamars are elegant birds with beautiful bright coloring, making them highly eccentric and a favorite for many watchers.

These tiny birds with big bills have a bare bright metallic green on the upper part with a rusty orange belly and some splashes of white.

The songs they sing are usually a repetition of a high-pitched peeo-pee melody, ending with a trill.

You can find them in a range of dry and moist woodlands where they lay their two to four rufous-spotted eggs in a burrow on the bank or a termite mound. 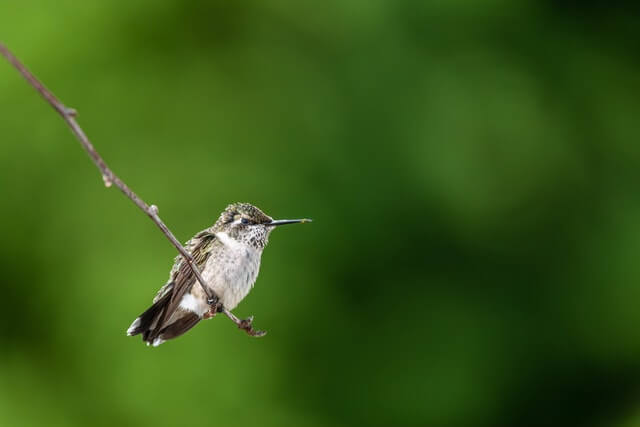 The brown creeper, also known as the American treecreeper, is a small songbird and the only treecreeper native to North America.

Adult brown creepers resemble tree bark which helps them to blend in with their environment and keep them safe from predators.

These tiny birds with long beaks breed in coniferous forests in Canada, Alaska, and America.

In addition, their high-pitched voice creates a small and thin ‘tseeesee’ sound. 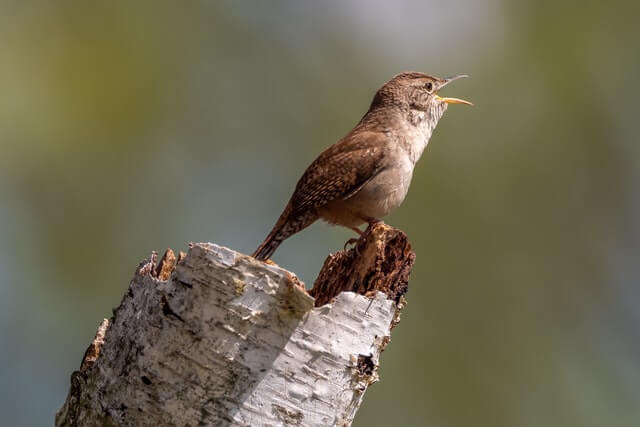 Even though they have a dull look, house wrens are known for their beautiful and effervescent songs. They are a small wren species with brown upper parts and a white/gray belly.

In contrast, juvenile house wrens have warmer feather color in comparison to adults.

Though their appearance is like any other wren, their voice is very different, with a dry quality that sets them apart from others.

They are plump, short-legged, and short-necked creatures with a mix of warm and dark tones like grey, brown, and black, which are great for camouflage.

The average length of American woodcocks is 26 cm, while their bill is a quarter the length of their entire body.

In addition, they have orange underparts, while their shoulders, wings, and head are patterned with greys and browns. 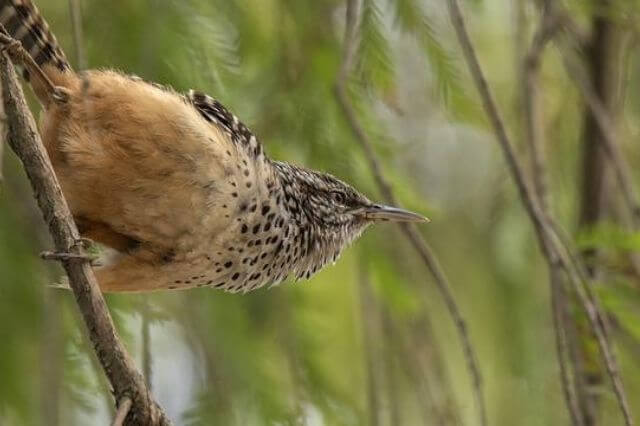 Cactus wrens are endemic to the southwestern United States and Northern and Central Mexico.

The most prominent characterization of their voice is the series of harsh and raspy jar-jar sounds. Each part of their song lasts around four seconds.

Cactus wrens have a brown plumage with a white and black pattern marking their body and a white eyebrow above their eye that goes all the way to their neck. 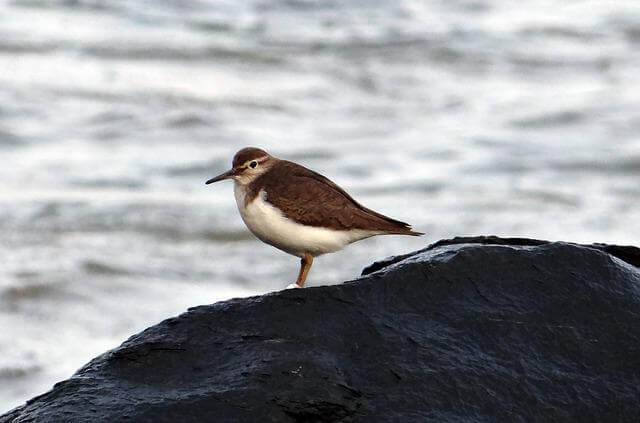 They have a dark greyish tone to their upper parts and white underparts with dull yellow legs and a beak that is paler at the tip.

You can commonly find them breeding in moderate and subtropical parts of Europe and Asia. These long-billed birds migrate to South Asia, Africa, and Australia in the winters. 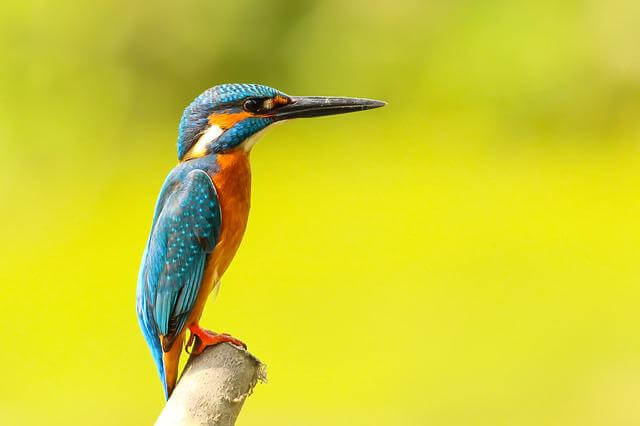 Kingfishers are a beautiful and brightly colored variety of tiny birds with large beaks seen in tropical regions of Africa, Asia, Oceania, and sometimes in Europe.

Their family consists of about 120 species and is divided into 3 subfamilies.

The plumage of most kingfishers is bright-colored with the most amazing colors, but blue and green are the most common ones. These colors are not because of any pigment but their feathers’ structure.

Kingfishers have long and dagger-like bills (around 4cm), the primary weapon for hunting their favorite food – fish.

Canyon wrens are one of the rarest wrens to find nowadays. They are 10 to 13 cm long and have a round, puffy body.

Using their thin beak, they can reach different insects that are a significant part of their diet.

Canyon wrens prefer to live in steeper and rocky environments. Still, they make short seasonal migrations from the various regions they are found in.

In addition, they have clear descending melodic notes that you’ll be able to recognize almost every time!

Unfortunately, canyon wrens don’t live for more than two years, so whenever you see them in the wilderness, just know how rare it is!

This article lists the most attractive small birds with large beaks and portrays how each bird is different in its features and characteristics.

All these birds, from the various parts of the world, are some of the most popular small birds with long beaks known to us.

So, now when you spot these in the wilderness, remember that these tiny little creatures evolved from dinosaurs. Unbelievable, right?

I hope you enjoyed this article and learned something new about all these creatures.

For the very end, here’s a recommendation of another popular read: Birds with multi-colored beaks.