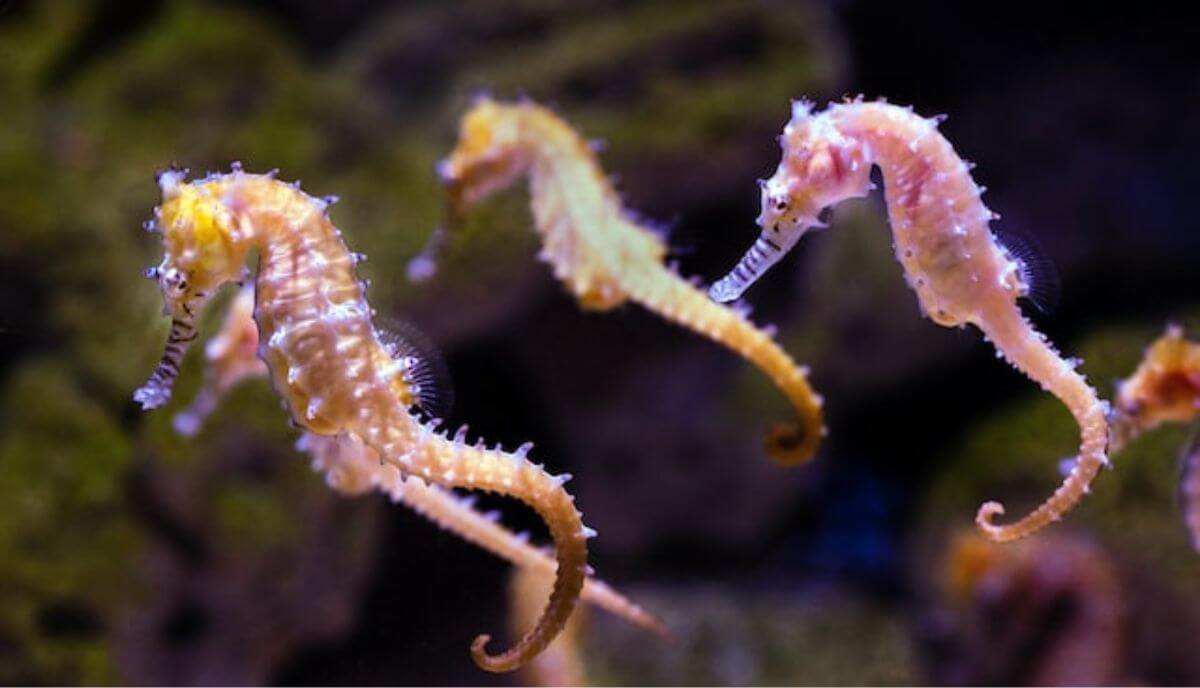 The animal kingdom is filled with fascinating beings. From strength to endurance, animals all over the world boast exceptional skills that allow them to adapt and survive in the vast wilderness.

Unsurprisingly, speed is also crucial to an animal’s ability to outlast in the wild.

However, it may be surprising to learn that many members of the beautiful fauna have adapted to a slow-going lifestyle. This leads us to the question of what is the slowest marine animal.

The slowest sea animals have learned to survive without moving at all! We call these creatures “sessile,” which means they are attached to a surface and can’t move freely. As a result, they are technically the slowest water animals!

If you want to learn more about these fascinating sea specimens, as well as other creatures that have adapted to the slow-paced lifestyle, make sure to keep reading.

The exact number of sea animals is unknown. However, scientists predict that number of species known to humankind counts over 250,000.

Among all of them, below are the slowest-moving ones.

As mentioned, sessile animals are a special group that manages to thrive in the wild without moving.

These organisms stay anchored to an environment and spend most of their lifetimes in a single place. Corals, sea sponges, and mussels are examples of these fascinating creatures.

You may wonder how they can survive without moving.

Firstly, these animals have very slow metabolisms, which means that they can survive on very little food.

On top of that, sessile marine animals produce chemicals that protect them from predators (since they have a disadvantage from being immobile).

Overall, despite not moving, this group of life forms has found a way to prosper!

An interesting example of a sessile organism is the sea anemone. 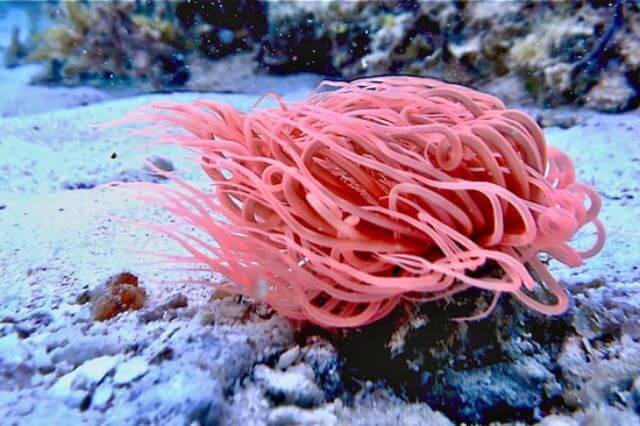 Although this creature is technically sessile, sometimes it moves from its original position. It moves so slowly that its movement can only be captured by a time-lapse. With an “impressive” speed of 1 cm per hour, the sea anemone is the slowest swimming animal in the world!

Next up on our list of slowest water animals is the beautiful starfish!

Starfish can be found in all of the world’s oceans, and even though they’ve adapted a lot of qualities, speed isn’t one of them! 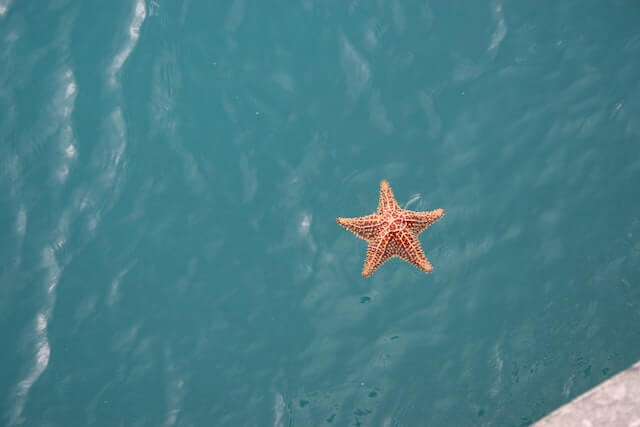 More research is needed in this regard, but it is estimated that starfish move one meter per minute, making them one of the slowest marine organisms. In fact, starfish move so slowly that they sometimes utilize the ocean’s waves to carry them more quickly.

In normal circumstances, they move by using their so-called tube feet. Species of starfish have thousands of these tube feet, and the animal uses the pressure from the water to power its movement.

Although the tube feet are the primary organs for movement in starfish, some species also use the feet to feed. More specifically, they hold down the prey using their tube feet, or if they are eating clams or shellfish – starfish use their feet to open the shells!

Despite being one of the slowest aquatic creatures, starfish have found a way to adapt to the ocean floor

Our next candidate for the world’s slowest sea animal may surprise you. It is the dwarf seahorse!

The well-liked animal may seem like a speedster, but it’s actually the opposite! 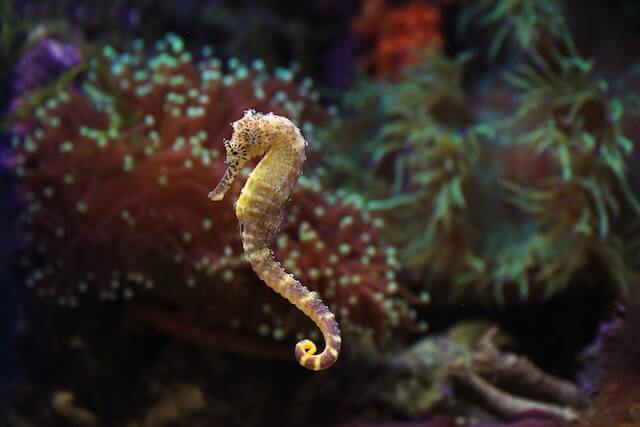 At the moment, this interesting lifeform is holding the world record for the slowest-moving fish at a speed of just 1.5 meters per hour.

You may have seen a seahorse flap its fins quickly, which are located at the top of its head. As a result, many people believe that seahorses are fast and use their fins to move swiftly through the ocean.

That’s not the case, even though their fins beat 50 times per second – it is not an indicator of the animal’s speed.

Interestingly, although the seahorse hasn’t adapted for speed – it is very mobile in the water! It can move in all directions seamlessly, including backward and sideways.

Manatees, or sea cows, can be a surprising addition to our group of slowest animals. However, once you consider that these giants weigh up to 600 kg, it makes sense that they are so slow!

After all, it isn’t easy to move all that weight around. 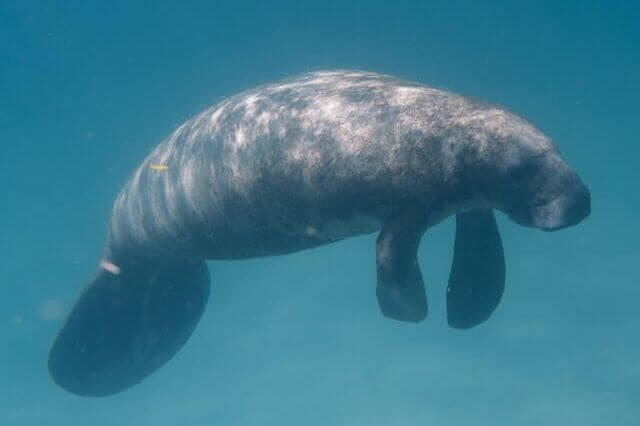 It is estimated that manatees move just 3 kilometers an hour, which is pretty slow for an aquatic animal.

Manatees have small flippers on their sides, allowing them to move through the water very slowly. They don’t have any natural predators, so they don’t need to be fast to escape danger!

These sea cows tend to stay in one place for longer periods, and they float close to the surface because of their buoyancy. Unfortunately, that makes them vulnerable to hunters.

However, despite their slow pace, manatees can reach an impressive speed of 30 km/h in very short bursts!

Last but not least on our list of the slowest ocean animals is the Greenland shark!

It may be surprising to find a shark on this list, but it’s true – this creature can swim at a maximum speed of just 2.9 km/h. In fact, the Greenland shark is considered one of the slowest sharks, as it generally moves at just around 1.2 km/h.

You may be wondering – how does a shark even survive with such a slow swimming technique?

Experts estimate that this shark hunts when the prey is asleep! On top of that, much like other animals on our list, the Greenland shark has a slow metabolism, so it doesn’t need a lot of energy to survive.

This fascinating animal has scientists stumped. The shark feasts on seals, which are much faster than its predator.

Although some believe that the animal ambushes its unassuming prey, there is no definitive answer.

Nevertheless, the Greenland shark has no problem living its slow life!