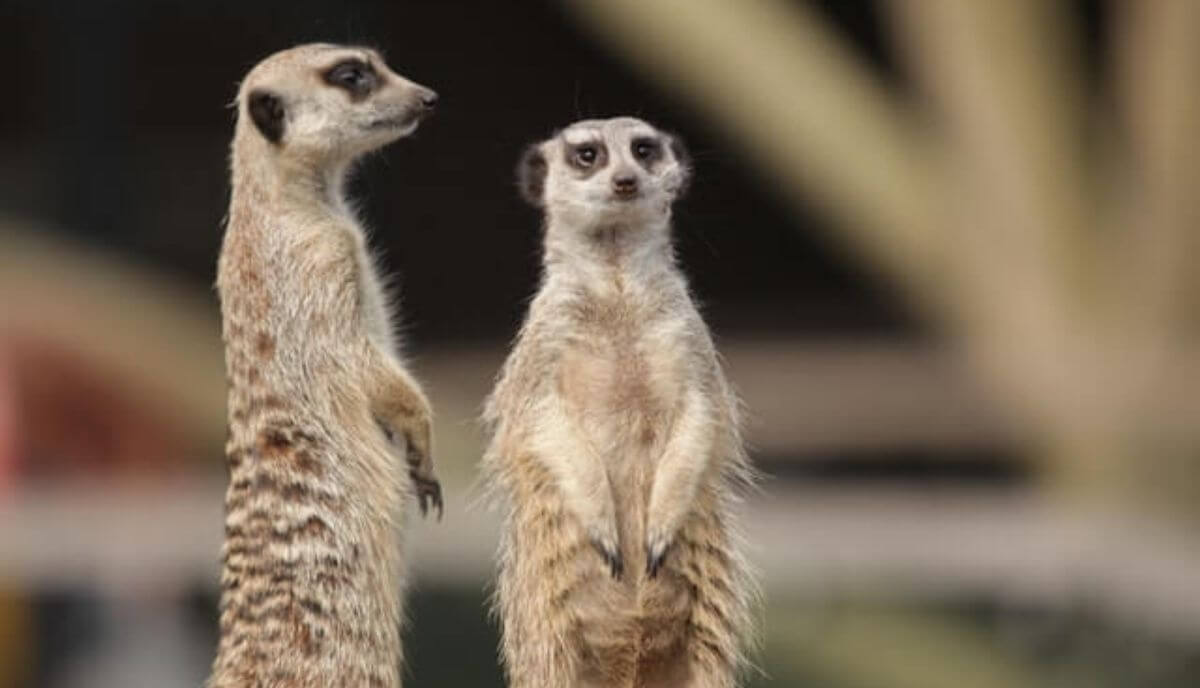 The animal kingdom is vast, and there are many animals that we might find rather extraordinary. Some of them are wild; some are cute, some are very docile, while some may be aggressive, so we should admire them from a distance.

However, in this article, we present to you a list of 16 skinny animals. These are some of the most fascinating, how they look, how they thrive, and how they look at the world. We are keeping human beings aside, as we know we are special animals, but not quite special to be on this list. 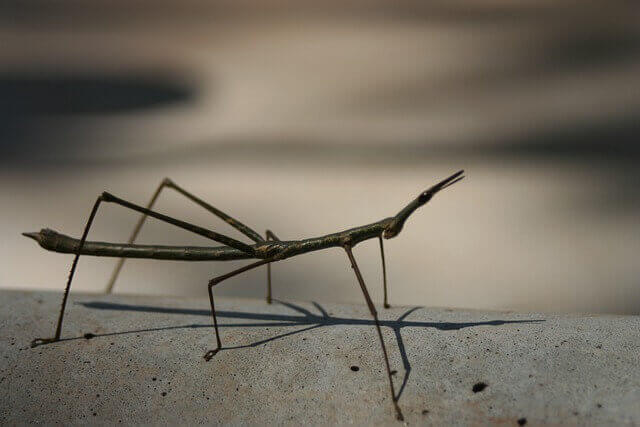 These long and skinny creatures are strange-looking ones for sure. They belong to the class of insects, and they are arthropods. You can find them everywhere around the world except Antarctica, although they like temperate and tropical regions to thrive.

These insects are masters when it comes to hiding in plain sight, as they look like small branches. You can handle them as they are not poisonous and will live up to a year. 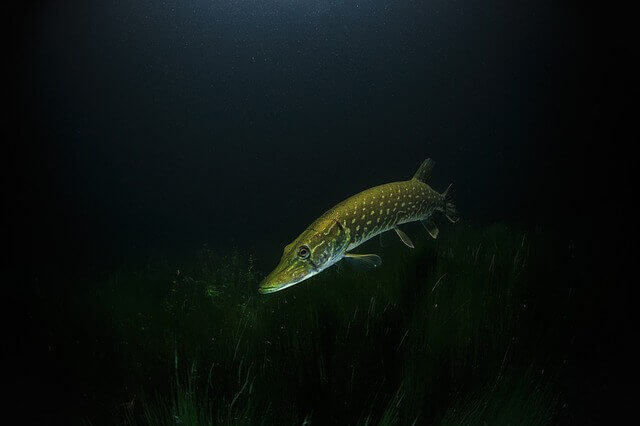 This skinny fish has a torpedo-like body with a pointy head and razor-sharp teeth. If some of you are afraid of fish, then this might be it. The pike fish, Esox, is commonly found in the fresh waters of Northern America, Western Europe, Siberia, and Asia.

They have a grey-green coloring which provides excellent camouflage in shallow waters; the patterns on each fish are as unique as fingerprints.

This species grows to quite a length – the biggest one caught was 6ft long and weighed 35kgs. These long skinny predators have a reputation for hunting smaller fish and sometimes even their own species.

Many people have also complained of pike attacks. Thanks to their long and slim bodies they deserved their place on our list. 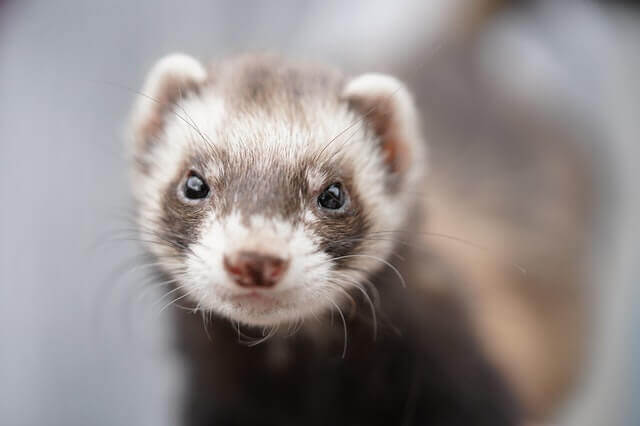 A polecat has the typical appearance which animal enthusiasts find cute; dark brown color, pale underbelly, and a darker mask around the face. They’re closely related to domesticated ferrets, mostly belonging to Europe.

Although you would think of adopting them because of their fluffy appearance, most polecats are solitary, and they hunt at night, making them carnivorous.

They are both small and skinny animals; adults weigh up to 1 – 1.5kgs. However, you may not be able to get close to them, as they release a pungent smell to repel other animals and predators. 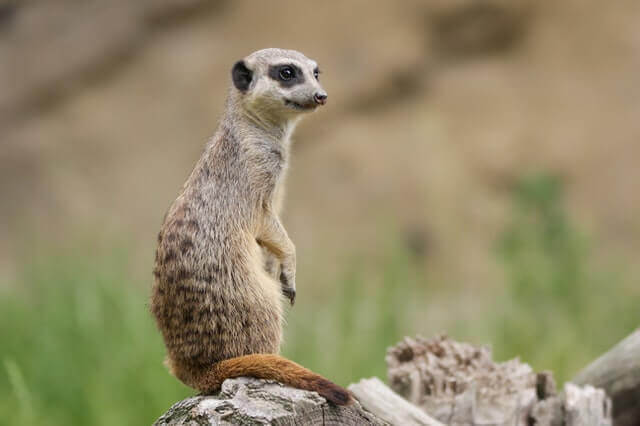 Most of us have spotted them in TV programs, where they’re seen living in the deserts with their colony. A meerkat is a type of mongoose typically found in southern Africa.

Their long tiny body, pointy snout, and tapered tail give them a skinny appearance, especially when they stand on their hind legs to look for food or predators.

These thin animals are almost a foot long and weigh around a kilo. Their furry look and curious nature can be tempting for some to keep them as pets.

However, they are wild, social animals, so they’re not good pets. Their entire colony lives in underground burrows and feeds on mostly insects and small reptiles. 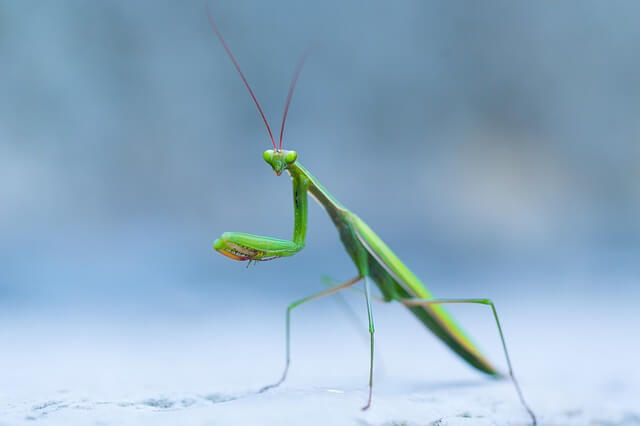 The mantis is a large skinny insect containing over 2400 species. However, we know them most commonly in a lighter green color. These creatures have a long, stick-like body, a triangular head, two large eyes, and a very flexible neck – rotating more than 180 degrees. Mantises are found in all continents except Antarctica, mostly in the temperate and tropical regions.

Adults grow up to 6 inches. However, the average mantis length is about 3 inches. Their front legs are always bent in a praying position, which is why they’re known as praying mantises. Regardless, they use those front legs to catch prey, as these are efficient predators.

These thin-looking animals are lightning-fast, and they start munching on their prey alive. That may sound pretty nasty, but surprisingly they can make good pets if anyone has a liking for them! They don’t require that much attention.

Will they bite or attack humans? It is unlikely to happen, but not impossible. However, you don’t need to worry as they don’t possess venom or any kind of disease.

Don’t go by the name, as it is a tiny salamander. The arboreal minute salamander measures up to 0.72 inches for males and 0.79 inches for females, making it almost impossible to spot if not looked closely.

Their long skinny bodies have a wider head, and the snout is pointed. Endemic to Sierra de Juarez, Mexico, these amphibians are critically endangered due to agriculture and logging in that region.

The diet of these tiny creatures is based on earthworms and invertebrates. However, given the opportunity, they’ll also feed on fish, snails, and even other salamanders. 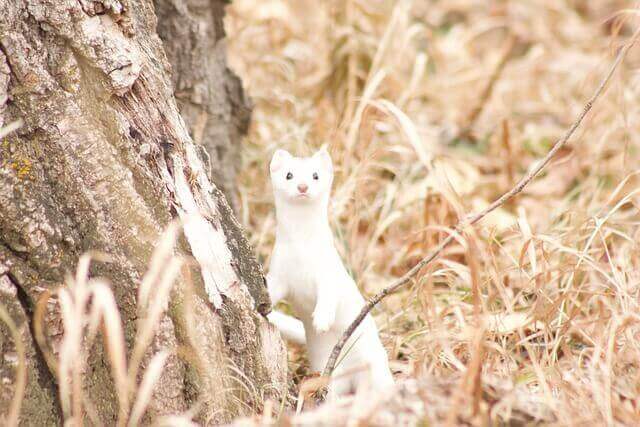 These are small, long, and skinny animals found in various habitats of the Northern Hemisphere. Stoats are related to weasels and have many physical features in common with their relatives.

These tiny mammals have small fat reserves, so they rely on being able to eat every couple of hours. And despite hunting for a good part of the day, these skinny creatures hardly gain weight. 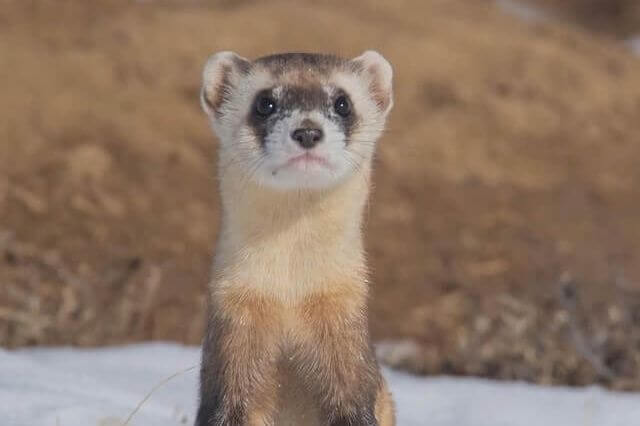 Another skinny animal that many people would want to pet, and surprisingly, some even do. Ferrets are nothing but the domesticated species, same as their European counterpart, the polecat.

Ferrets are nimble creatures, and their population is spread around temperate regions of America, North Africa, and Europe. Adults grow up to 18 inches and weigh up to 2.5 kgs.

In the wild, these carnivorous animals live in burrows, mostly in temperate regions. The idea of keeping one of these as a pet may sound tempting, but ferrets do not pet easily.

Besides, if you have young children at home, it is better not to keep them as they often bite. They can become friends with cats and dogs, but they can make a meal of other small pets such as frogs or rodents.

A gecko is a sleek, small and skinny reptile that can be a great pet. Dwarf geckos are prey-driven, so they are good for observing all day long.

As their name suggests, these geckos are tiny and only grow about 2.5 inches at most, weighing only a few grams.

This species is endemic to central and southern Africa. As they commonly show up near people’s homes, few of them end up as pets. These little creatures live quite long – you can expect 5 to up to 10 years.

Dwarf geckos feed on small insects, worms, and larvae. Many other sub-species of dwarf geckos are spread around Africa; some of them are even endangered. 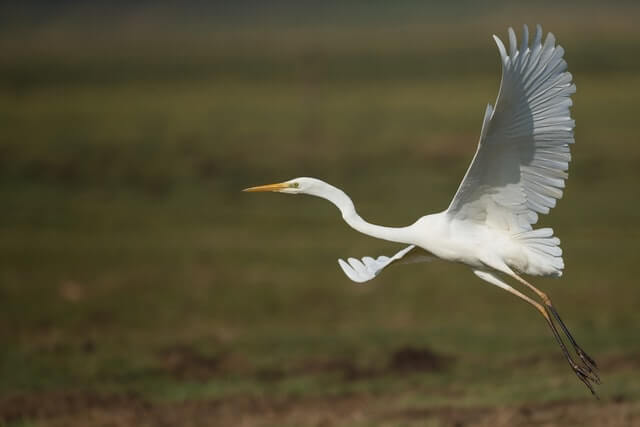 Skinny legs and necks, white plumage, and dagger-like bills, great egrets are easily recognized birds. These funny-looking tall and skinny birds are found in various worldwide habitats; however, they are fons of tropical environments.

As they are mostly found near the water, their diet is based on different aquatic creatures. They are opportunistic carnivores, consuming primarily fish, frogs, snakes, and small mammals.

Some of us might get freaked out, but this snake is as small as a penny in reality. Moreover, this species is the smallest known snake species, reaching only up to 4inches and weighs less than a gram – think about that!

Additionally, they are blind and not venomous, so some of us may even feel pity for them! This reptile is endemic to Barbados and feeds on insect larvae.

Barbados Thread Snakes are one of the smallest and skinniest reptiles in the world. 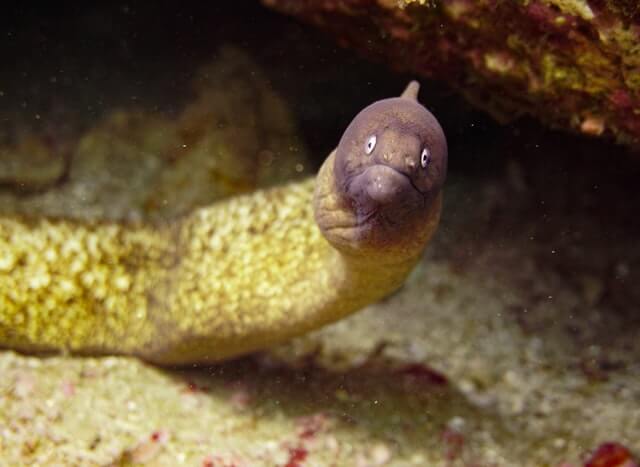 Eels, the name itself, are enough to inflict terror in some people, but in reality, you don’t need to think of electricity when you hear about eels. These snake-like creatures may look ferocious, but actually, they’re fish. Most eels do not even wield electricity; only a few species do.

Apart from their long, snake-like skinny appearance, they are quite shy and won’t probably attack unless threatened or disturbed. Eels are found in most places – from Asia to America – in both fresh and marine waters.

Furthermore, they are quite edible; some say it tastes sweet. Eels can grow from a few inches to up to 9ft and weigh accordingly. However, if you plan to eat eel, make sure it is well-cooked; else it can prove fatal after consumption.

It is another animal with a snake-like appearance. Slender salamanders are small, lungless creatures; however, they have four toes in each of their feet. These animals are endemic to northern California and grow up to 5.5 inches in length.

As small as their appearance is, they prey on small insects such as small beetles, mites, crickets, and spiders. Their predatory habit is much like frogs.

Although they look too cute for their size, most of them release toxins over their skin which can be poisonous if ingested. However, due to various reasons, their population and habitat are on the decline. 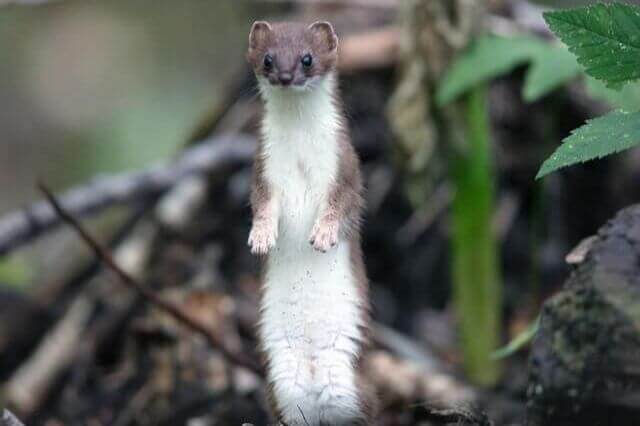 Just like polecats and ferrets, weasels belong to the same family of mammals, commonly known as the genus Mustela. Their bodies are long and skinny, with four very short legs.

These carnivorous animals mostly reside in open fields, farmlands, and shallow woods, especially near a source of water.

Adults can grow up to 12 inches and can weigh around 350grams. These mammals are active predators and are active mainly at night. Their opportunist mentality often forces people to treat them as pests.

Although the name suggests cuteness, their appearance may make you think otherwise. Needlefish, or Belonidae, are marine creatures with long jaws and razor-sharp teeth. These fish are quite experts in making short jumps out of the water with a great speed of 37 mph.

You can find these thin creatures in the western Atlantic region, but sometimes they can be spotted in freshwaters, such as streams and creeks. They swim near the water surface to catch their prey, but sometimes they become food as they’re quite edible.

Their tiny and slender appearance makes them appear on this list of skinny animals. 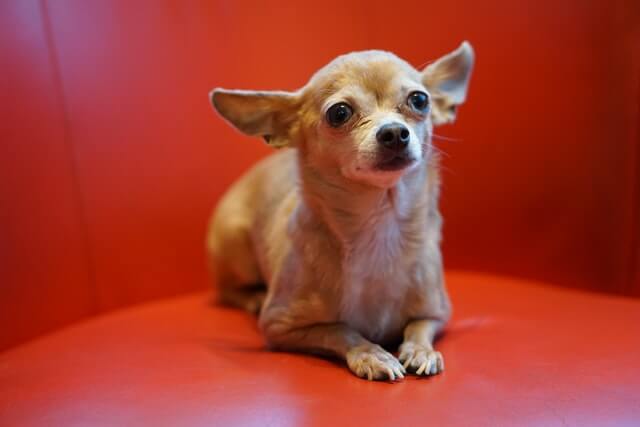 The last members on our list of skinny animals are chihuahuas. This popular dog breed is a perfect example of animal adaptation to its environment. Being native to habitats with scarce food resources, these tiny dogs became very skinny in order to survive.

These dogs are known to have energetic and playful personalities. Besides, they are loving and intelligent creatures that are fairly easy to train. Pet chihuahuas have a rather long life span; an average of 15 to 20 years. Their number one favorite meal is the meat of any kind.

With all the variety in habitat, behavior, and diet, all these animals share a common characteristic; their long, skinny bodies. Some skinny animals from the list above make good pets, while others are exclusive to wildlife and even legal in some areas.

Besides all that, all of them are nothing less than fascinating in their own right. Thank you for reading. Here’s a recommendation to a similar read: Animals With Red Eyes