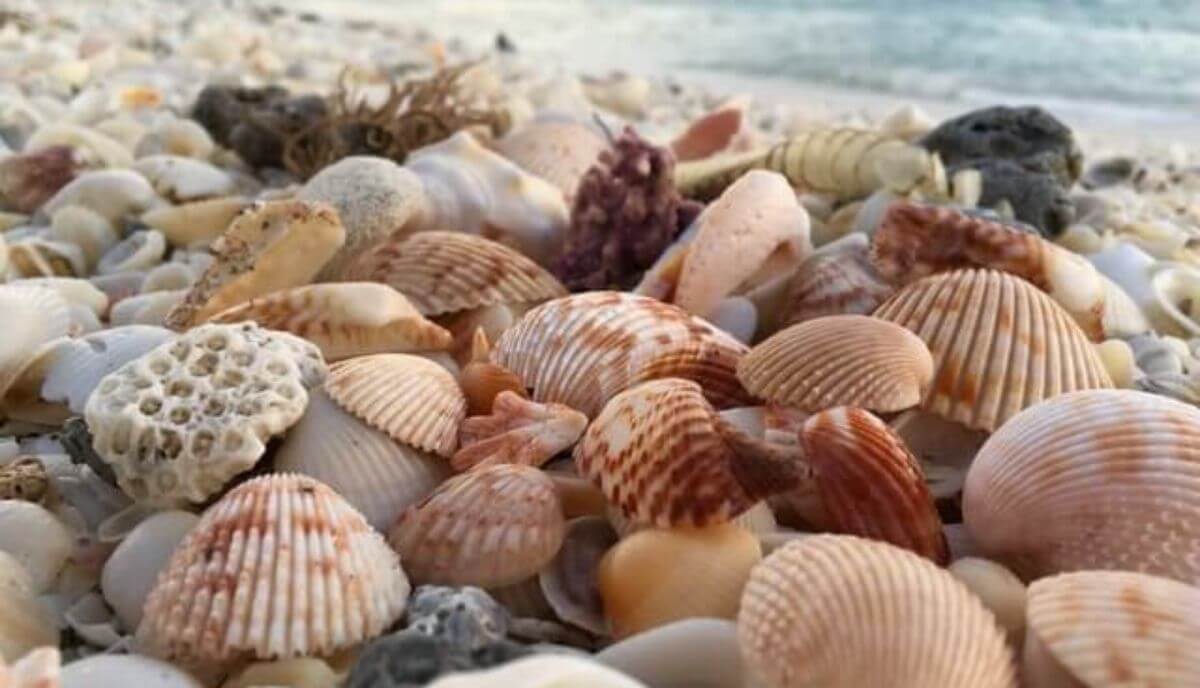 You have seen many fascinating land animals carrying their home around in shells! But what about sea creatures?

Yes, there are plenty of sea animals with shells, actually even more so than land ones.

Examples of sea animals with shells include pistol shrimps, clams, oysters, mussels, scallops, nautilus, and others. Most sea animals have hard shells that encompass their soft bodies. The shells act as protection against predators.

Some sea animals like mollusks spend their whole lives in their shells. Others like the oysters produce precious pearls in theirs!

The first creatures on our list of sea animals with shells are shrimps. The upper part of their exoskeleton is called the carapace. The carapace projects a bit forward right above the eyes to the part called the rostrum.

The rostrum is a stiff extension of the shrimp’s head, and it serves as a defensive and attacking tool. The entire exoskeleton protects the shrimp’s soft insides.

There are one pretty unique species of shrimp. It is the pistol shrimp. As the name suggests, pistol shrimp create bubbles jetting out at high speeds. This creates a pistol-like snapping sound.

Pistol shrimps are commonly found in the shallow seas of tropical and subtropical regions.

Clams are sea creatures equipped with shelled covers that are connected by two adductor muscles. They are a part of the bivalve mollusks, which also include clams, oysters, and scallops.

In order to open or close their two-parted closings, clams contract or expand their adductor muscles. However, not all clams have the same shell shape.

A species, like palourde clams, have triangular or oval-shaped shells. Its shell is glossy white with orange or yellow tints and a bluish tinge on the dorsal line on the inside. Its outer surface is mostly light brown, yellowish with dark marks.

Others, like razor clams, resemble an old-fashioned razor. Their shells are parallel-sided and elongated. Lying buried beneath the surface to depths of around 2 feet, razor clams do not travel over the bottom often.

As the name goes, this scary-looking crustacean looks just like a spider at first glance. Their long twelve-foot legs make them look like giant spiders! Japanese spider crabs are the largest living arthropod and crustacean.

The carapace width of this crab can grow up to 16 inches. They use their armored exoskeleton to protect themselves from predators such as octopuses and stingrays. Its bumpy carapace blends well into the rocky ocean floor and is a brilliant camouflage.

Japanese spider crab further deceits others by covering their shells with sponges and other animals. It shapes these animals using its mouth before attaching them to its shell.

In time, these creatures become part of the shell. This behavior hides its entire body from unwanted visitors.

The Japanese spider crab also undergoes 100 minutes of molting i.e., a regular shedding of its external shell and other coverings. The molting starts from its carapace rear and ends at its walking legs.

Famous mainly as a delicacy and for their beautiful pearls, oysters are saltwater bivalve mollusks. In some oyster species, the valves have an irregular shape and are highly calcified.

There are different species of oysters having different kinds of shells. The thorny or spiny oyster has many pointy thorn-like protrusions on its shell.

Saddle oysters or jingle shells have translucent, extremely thin paper-like shells. Their shell copies the shapes of the object it lies on. It’s usually the large shell of another creature or a rock.

Windowpane oysters, a type of saddle oyster, have capiz shells that are used to make decorative objects like lampshades.

Pearl oysters are part of the family of feathered oysters. These produce beautiful pearls between their shells.

Fun Fact: Oysters can fertilize their eggs and are self-reproducing creatures.

Found along the Atlantic coast in North America, the American Lobster is considered a delicacy by most. They are the heaviest arthropod and crustaceans in the world and weigh from one to nine pounds.

Like all other lobsters, American lobsters also have a hard protective exoskeleton. They shed this exoskeleton as they grow. This makes them vulnerable in that period. Interestingly, while shedding, many species change their color.

American lobsters are divided into different types as per their shell color. Blue lobsters get their color from a compound called crustacyanin. They are the most common kind.

Other types include red, yellow, or orange, split, and white or albino.

Just like other bivalve mollusks like clams and oysters, mussels are also consumed as a delicacy all over the world.

Their shells are asymmetrical and elongated as compared to other clams, which are more rounded or oval. Mussel shells have three layers, and they often come in dark brown, blackish, or blue colors.

The shells of mussels have strong adductor muscles that join the two parts. The shells protect the animal from predators and desiccation. They also act as a support for soft tissues.

And, an outer layer, (the periostracum) is made of the protein conchin. This layer protects the middle part of mussels from abrasion by acids dissolution.

Fun Fact: Mussels are one of the healthiest food to include in your nutrition!

Krill are tiny crustaceans creatures that represent the main food source for many ocean carnivores. Because of these, they are considered to be one of the most important animals of the aquatic ecosystem.

Its name comes from Norwegian for “small fry of fish.” Krill live for up to six years and can grow to 2.4 inches.

Similar to other crustaceans, krill have a chitinous external skeleton or shell. The shell protects the head, thorax, and other internal organs. In most krill species, the outer shell is transparent.

A krill’s specially-evolved, unique organs within their bodies are bioluminescent. In other words, krill can produce light! They use the light as a means of counter-illumination camouflage and communication.

Fun Fact: Despite their tiny size, krill swarms can be seen from space!

Although they look like mollusks because of the hard shell that covers them, nautilus is a cephalopod. Nautiluses grow up to 10 inches in diameter.

They can withdraw into their planispiral shells completely and shut themselves. The shell opening is covered by a leathery hood made of folded tentacles.

A nautilus’s shell is made of two layers. It has an iridescent, striking white inner layer. The outer layer is somewhat matte white.

The innermost part of the shell is a beautiful blue color. Their shells are pressure-resistant and only implode at depths of 800 meters.

Internally, the shells are split into different chambers. The upper layer of their shell is dark with irregular stripes. This helps them blend in dark waters.

The underside is almost fully white, making it practically unseen in the brighter underwaters.

Fun Fact: The nautilus has around 90 tentacles that they use to sense chemicals in the water for food or danger.

Another bivalve mollusk consumed as a fancy meal, scallops are often mistaken for scalloped potatoes!

Unlike other bivalve mollusks, scallops move easily, thanks to their streamlined shells. Their shells also protect them from predators.

A scallop’s shell consists of two valves, the right, and left valves. Most scallops rest on their right valve. This makes it more rounded than the left.

As opposed to other bivalves, scallops have a unique comb-like structure called ctenolium on the anterior edge of the right valve. Most scallops lose it after maturation.

Scallops have a single adductor muscle inside their shells, similar to true oysters. And because they are active swimmers, this muscle is much more developed compared to oysters.

These sea animals with shells are found in oceans all over the world, but especially in the Indo-Pacific waters.

Fun Fact: Around their mantle, scallops have more than 200 eyes!

Chitons are marine mollusks that live near the coasts. They are oval-shaped, and they use their large flat foot for clinging to rocks and for creeping over the sea floors. The sizes of chitons range from a fingertip to almost as big as a human foot!

Although they look like snails, their upper shell is made up of eight separate valves. These valves or shell plates slightly overlap and interlock at the front and back edges. A muscular skirt known as a girdle encircles these shell plates.

A chiton’s shell lets them move freely and flex upward during locomotion. It also protects them from predators. If disturbed or dislodged from rocks, they roll into a ball like woodlice.

A chiton’s shell valves come in many colors, patterns, and textures. There are around 600 species of chitons found all over the warm parts of the world.

Fun Fact: There are more than 1,000 living species of chitons!

The last members on our list of sea animals with shells are barnacles. Although different looking from others, barnacles are classified as crustaceans.

Their lives begin as free-swimming larvae with crustacean traits. They are encrusters that attach themselves to live symbionts/substrates like sea snakes, lobsters, whales, and even other crustaceans.

The most common acorn barnacles grow their shells directly on their substrate.

Free-living barnacles attach themselves using cement glands. These glands are part of a calcified plate. A ring of such plates surrounds the body of the barnacle.

Depending on the species, the plates are held together in many ways, even by fusing solidly.

Always in their shells, barnacles reach out for food in the water using modified legs to draw plankton and detritus inside. They spend most of their time glued to the bottom of the boats, rocks, and other hard surfaces.

As we have seen, sea animals with shells come in all colors, shapes, and sizes. While some look dangerous and creepy, others look beautiful with their translucent colors.

Some even produce precious materials like pearls. Most well-known crustaceans and mollusks are consumed in many parts of the world.

We have covered all the major sea creatures sporting shells on our list. If there are any missing, do let us know!

Thank you for reading! If you liked this post, here’s a recommendation on a similar read: Animals With Fangs