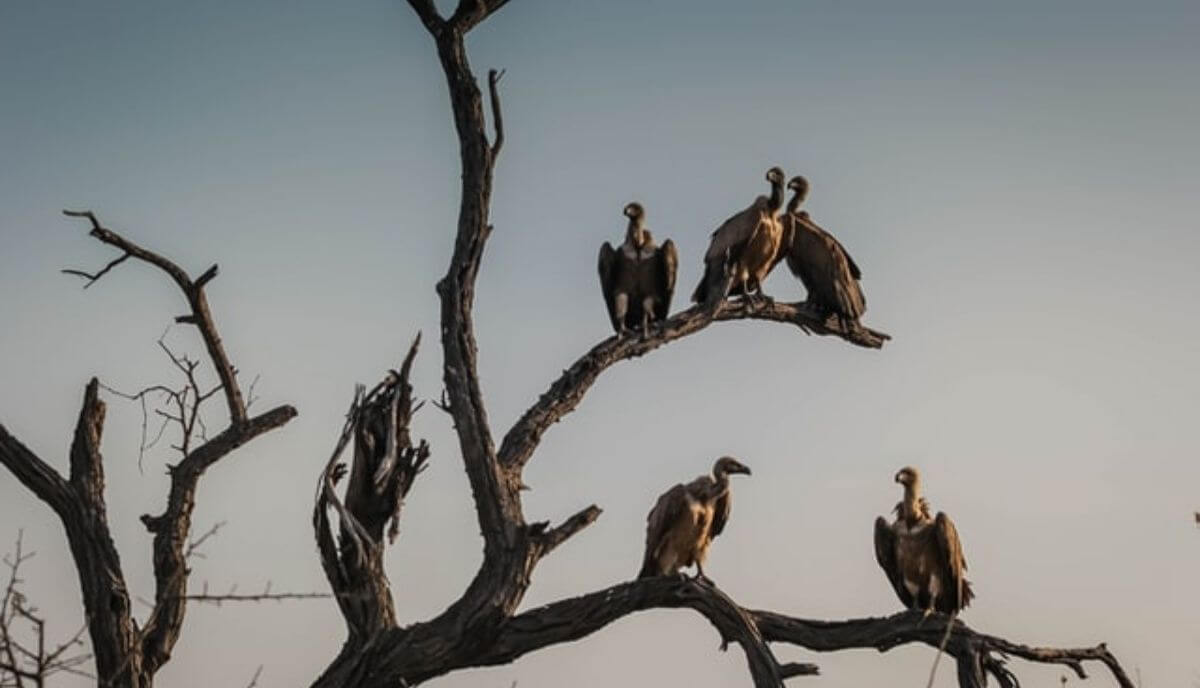 Scavengers are animals that depend on the dead carcasses or kill by other carnivores for food and therefore play a role in riding the ecosystem of animal remains.

There are a number of scavengers of different classes, but today we are going to talk about the class of birds that scavenge – scavenger birds. 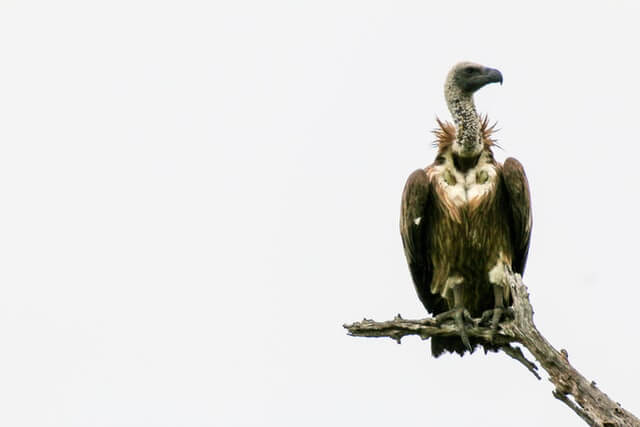 The vulture is a scavenger bird and one of which depends solely on either animal that died of natural causes or carrion – they eat everything that is not alive.

Some have powerful beaks that can tear hard meat and sometimes bones. But where some lack strength and strong features, nature has compensated.

A number of old-world vultures and all-new world vultures have bare heads that prevent blood infested with germs from sticking to their feathers when they dig deeper into their meal.

For this compensation, they can get away with eating just about any dead organism as far as excreted from living originals. 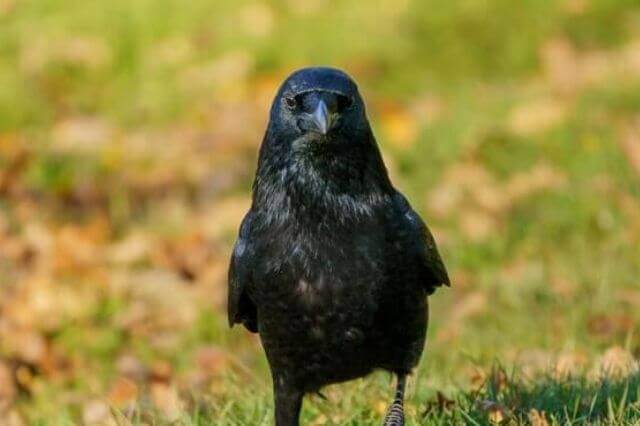 As its name implies, carrion crows are scavenger birds, but unlike vultures, they live in close proximity with humans more than in the wild. Carrion crows can eat just about any biomass that is disposed of by humans.

However, they also feed on living animals like worms. These birds can go as far as catching bigger prey or even bullying other carnivores to give up their kill by ganging up against them.

And because of their nature of bullying and stealing kills right from the mouth of the original hunters, crows pose as threats in the wild, and there are hunted down by bigger birds of prey or land carnivores.

Some of their most usual predators include eagles, peregrine falcons, northern goshawks, among other powerful raptors. 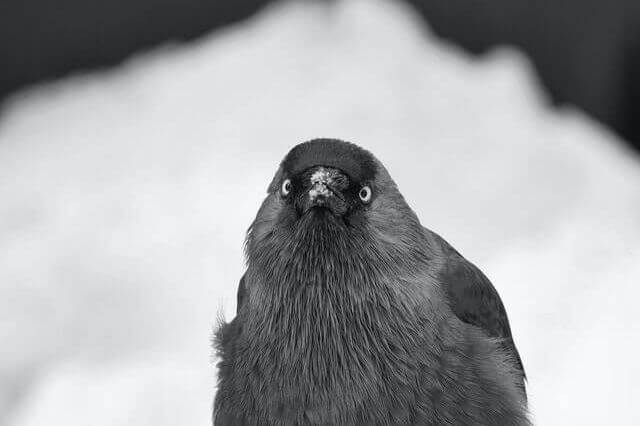 The western jackdaw is a scavenger bird related to crows and ravens. However, these small birds do not depend solely on carrion or rotting biomass.

They are not so friendly with humans in the countryside, but in big cities, they are a lot more tamed and civilized. Invertebrates are their main sources of food, but occasionally they feed on feces and sometimes roadkill.

As close to civilized as they seem, western jackdaws are petty scavenger bird thieves. They might not eat other birds alive, but they can still run away with the egg of another bird and devour it. But, we still give them credit for being the most intelligent family of birds.

Living in urban areas does not take western jackdaw off the menu. In the city, birds of prey and even domesticated cats prey on them too. They mainly prey on their eggs, but sometimes predators go for adult jackdaws too. 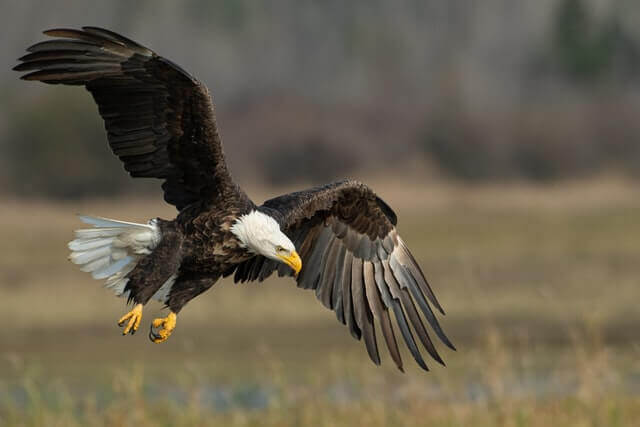 Bald eagles are predominantly hunters but also scavengers. And compared to other scavenger birds, they are a little dignified. Bald eagles are faster than many other birds in the sky and have very fluid movements.

Their large and strong talons are used to grip and catch prey on the ground. Although they are fast and somewhat strong, bald eagles are not strong enough to chase prey for a kill. Instead, they depend on the element of surprise to land a meal.

Bald eagles are animals that primarily eat fish, but by being opportunistic feeders, they also eat frogs, turtles, small mammals, and rodents.

However, they’ll often scavenge food from other smaller meat-eating birds. According to Wikipedia, 24% of their total diet comes from scavenging. 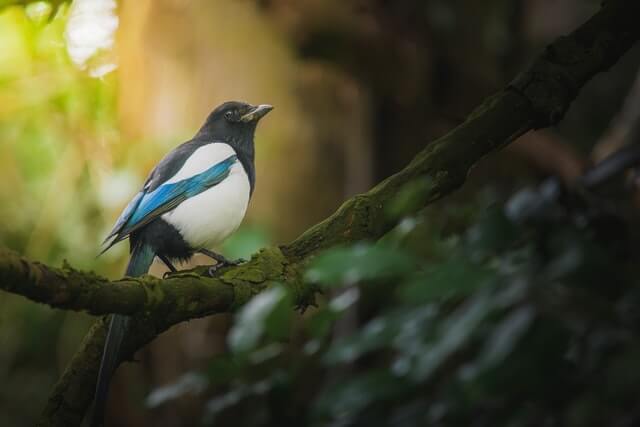 Eurasian magpies can be considered scavenger birds, but just like bald eagles, they do not only rely on carrion or rotting biomass to feed. They are quite clever birds – and they use their intelligence for stealing food from other animals.

Although small in size, Eurasian magpies can plot to hunt animals as large as life rabbits for dinner, they are in fact birds of prey.

They spend most of their time near the ground, looking for the next prey to steal. Magpies are even known to steal and hide the food underground for later use.

However, they are omnivores so they mash up eating large animals like rabbits with invertebrates and plants. It is on rare occasions of famine that they stoop as low as eating roadkill and carrion. 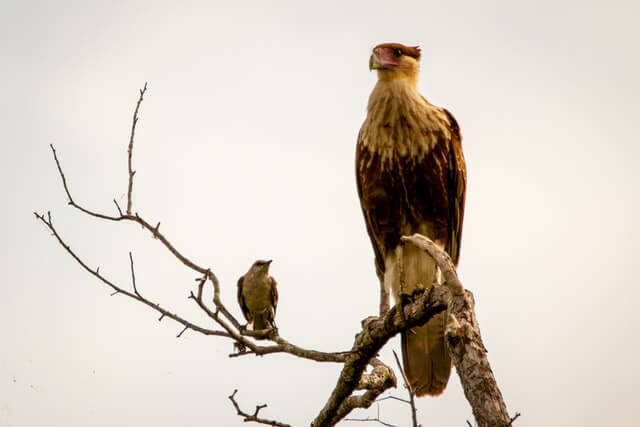 Here come the opportunistic thieves of the wild, crested caracaras. So far, we have talked about scavenger birds that manage to hunt and eat their prey in whatever little way they can, only settling for carrions or carcasses of dead animals for food when there is scarcity.

But crested caracaras are an exception. Just like vultures, they are true scavenger birds. But in the place where vultures lay in wait for when the real owners of the kill have eaten to stupor, crested caracaras refer to steal the kill right out of the hands of the owner.

They steal kills from animals on land and go as far as stealing in mid-air and flight. Eggs from other raptors like them are no exception.

The closest to hunting for food that crested caracaras have gotten is preying on invertebrates like insects or snowy egrets. Apart from that, it’s brave robberies and animal carcasses all the way.

By being predators and scavengers, American crows are not picky eaters. In fact, they will eat just about anything. However, like many other species on our list, crows are omnivores, and will also partly eat plant-based food.

Still, the bulk of their diet comes from a mixture of live prey and rotten carcasses. This includes various road-kill, reptiles, amphibians, insects, human food, eggs, and even other birds.

Crows are known for their advanced intelligence, which besides solving various problems, they use for hunting, mobbing other animals, and stealing food. 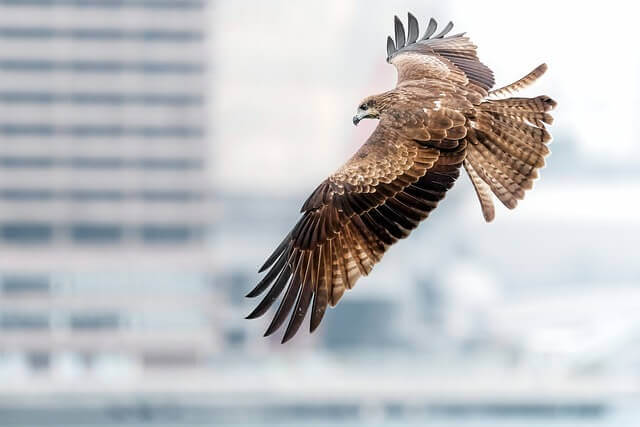 Like many other predatory birds, black kites are scavenger birds, but they hunt animals for food too. These birds are not selective eaters, and some of their most common prey include fish, mollusks, rodents, small birds, snakes, and insects.

Australians actually believe that black kites purposefully spread fire by spreading a single burning bush to the rest of the forest to lure prospective prey out and in the process stunning them before swopping in to kill them.

Black kites do happen to be around when there are fires but to be the ones to specifically start the fire is an unproven fact. However, if this statement is true, then we must pay tribute to these cunning birds. 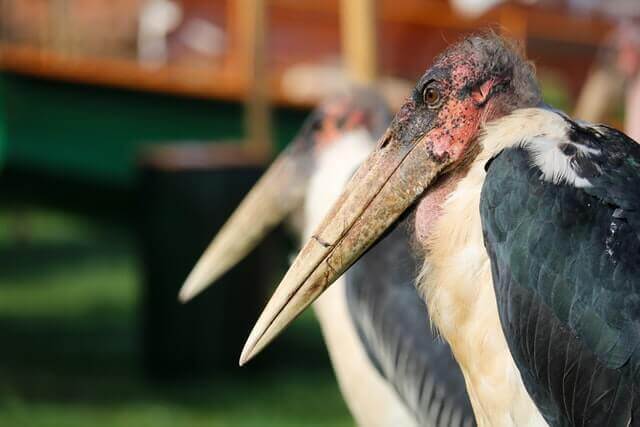 They have all the physical traits to aid their choice of food. Like vultures, the marabou stork has a bald head for blood-free feeding.

However, they sometimes accompany vultures as they have strong beaks for tearing out the flesh, to either steal the fallen pieces on the ground or straight out of their mouth – classic.

Though adult marabou storks make do with feces, carrions, and carcass of dead animals for nourishment. But when it comes to the diet of their young, they hunt for live animals.

When hunting for these live prey, they usually go for fishes, frogs, insects, and even eggs of other birds or crocs. 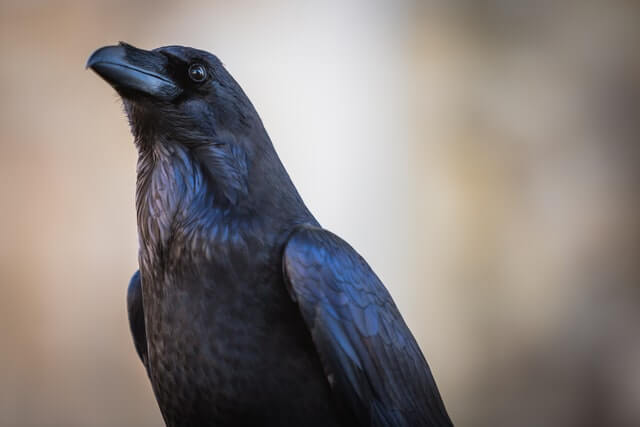 Like their cousin crows, the ravens are also omnivorous predators and scavengers. This means they will eat virtually anything, from insects, and small rodents, to lizards, human garbage, and carrion.

However, depending on their habitat, some ravens will typically get their food by scavenging, while others obtain half of their food hunting.

Sometimes ravens use cooperation in their favor to hunt big prey, prey that a single bird would not be able to take down.

Apart from that, ravens are also known as ‘wolf-birds’ due to their special relationship with wolves.

Namely, these two species created a mutually beneficial partnership, whereas birds serve as an extra eye to wolves, informing the canids about the potential prey. Animal experts also believe that wolves have learned to respond to ravens’ calls that indicate the target. 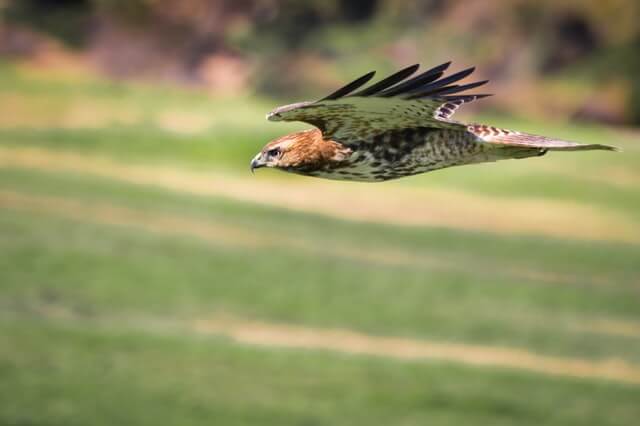 These strict carnivorous birds are known for their adept hunting skills. However, this naturally gifted hunter is also an opportunistic scavenger and will gladly snatch a slice of dead meat whenever possible.

Depending on the environment they hunt it, red tailed-hawks typically use one of the two hunting methods. Hoovering or perching.

These birds of prey are some of the finest hunters in the wild, and their main weapons include keen eyesight, great flight speed, sharp beaks, and talon grip strenght. 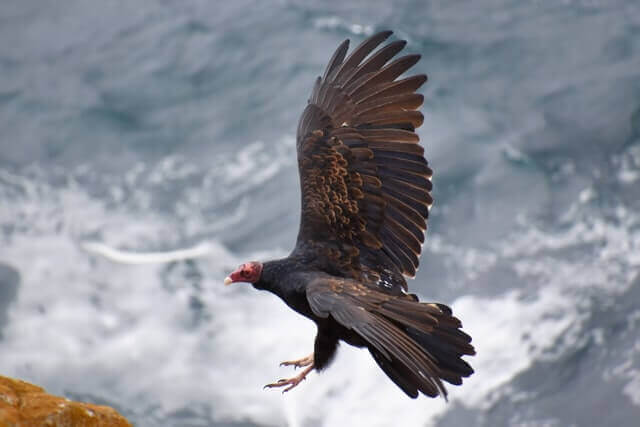 The last members on our list of scavenger birds are California condors. Found in mountains, canyons, and gorges, these birds are the largest birds of North America.

California condors are true scavengers, meaning they strictly feed on dead organisms, and they never hunt or attack any living being.

But, they will sometimes travel for more than 160 miles in one day in search of carrion. These big birds prefer the carrion of larger animals, such as deer and cattle. However, they will also feed on aquatic mammals that have died along the coastline.

Although, when food is scarce, condors will also feed on the carcasses of small rodents and reptiles.

In Summary on Birds That Eat Dead Animals

In the wild, the supreme law is survival of the fittest, in other to brave the weathering storm called the jungle. But in place of strength and size, some animals have made up for the cheat code – stealing. You can call them lazy but nature has given them the perfect back story to cover up.

Scavenger birds are very important for the environment, as they keep an ecosystem by eating carrion preventing diseases from spreading. These birds are natural sanitation services that we should be protected in order for them to protect our habitats.

Thank you for reading. Hopefully, you’ve learned something new today. If you like this post, we would gladly recommend you a similar read: Can Birds Swim?