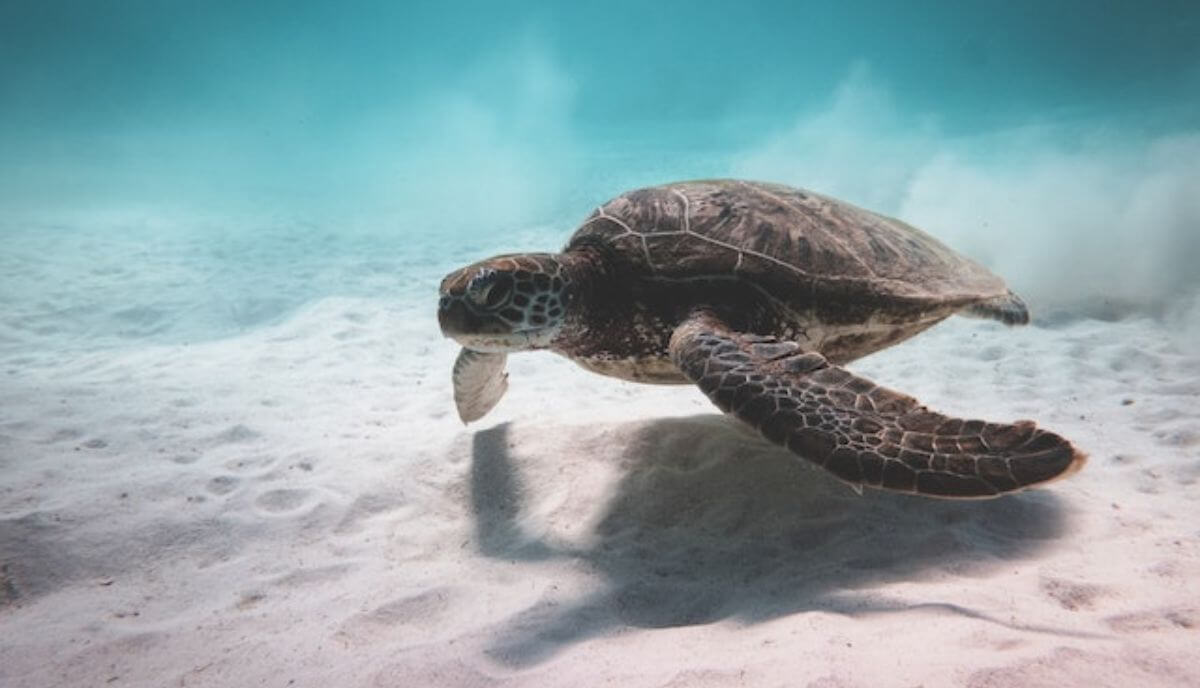 if you love the ocean and all the fascinating creatures that inhabit salty environments, you are in the right place!

From octopuses with nine brains and tusked walruses to tiny seahorses and giant killer whales in the world of saltwater animals, there is something for everyone.

Take a snorkel with you, and let’s jump right in! 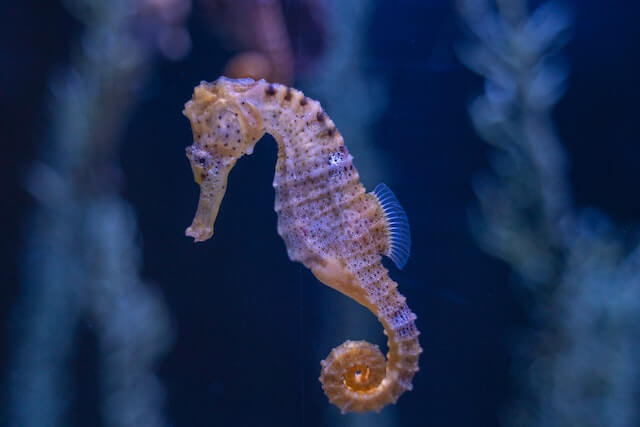 The seahorse is a tiny saltwater animal that (as its name suggests) resembles a horse. There are 46 species of seahorses, and they are easily recognizable for their upright swimming.

Interestingly, some species can change colors to attract a partner or camouflage. Seahorses can have spots, stripes, frills, and crowns, but they all have a prehensile tail used during mating or to avoid drifting.

Most seahorses thrive in coral reefs and tropical waters but also prefer shallow waters. However, a few species can be seen in estuaries since these tiny fishes can tolerate wide salinity ranges. 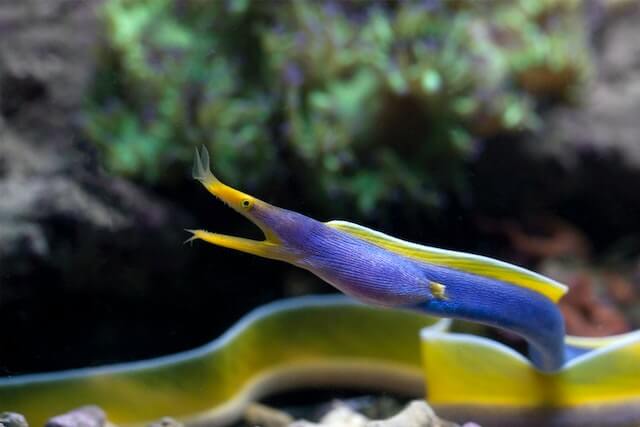 Eels are unique fish species that resemble snakes and can even be mistaken for them.

These saltwater creatures are skilled predators and have a fantastic smell that helps them efficiently hunt their prey, like mussels, frogs, and snails.

They are also known for being “night owls, “so they hunt during the night and sleep over the day. Depending on the species, they can be anywhere from 2 inches to 10 feet long.

Eels prefer shallow waters, and you will find them burrowed in the sand, among the rocks, or in the mud. During the winter, they undergo metamorphosis to endure the cold temperatures without damage. 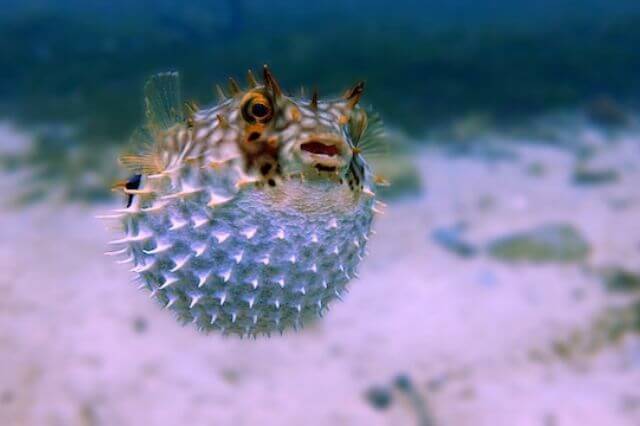 The pufferfish, also known as the blowfish, is one of the most exciting saltwater animals, known for its inflatable look.

They may look clumsy, but when faced with predators, their elastic stomachs can ingest large amounts of water or air and help them turn into two or three times bigger animals, making them huge, inedible balls.

Also, these animals are extremely toxic. One pufferfish has enough tetrodotoxin to kill 30 people, making it more poisonous than cyanide.

There are over 120 species of pufferfish, and they are primarily found in tropical waters. They prefer warm waters, and you can mostly see them near coral reefs. 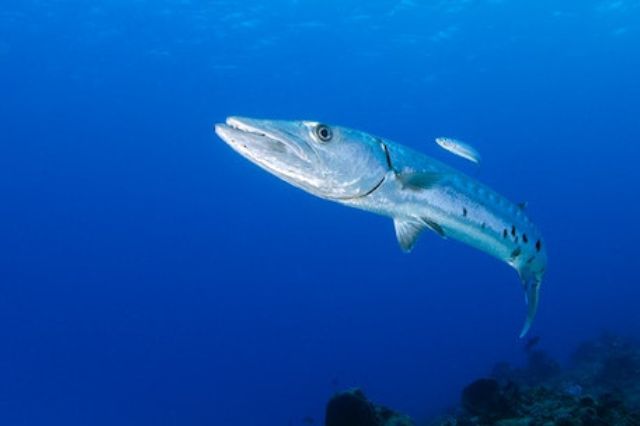 A barracuda is one of the biggest saltwater fish, with a cylindrical body that allows it to move quickly and a mouth full of sharp teeth.

You can recognize barracudas by their shiny silver sides; most species are gray or off-white. Some can also be blue on top, which would help them blend in with the sea and camouflage easily.

Big barracudas usually stay alone, while smaller species tend to form groups, called shoals, and hunt with the rest of the tribe.

Regardless of their size, most barracudas can be found near the top of the water, around sea grasses and coral reefs. 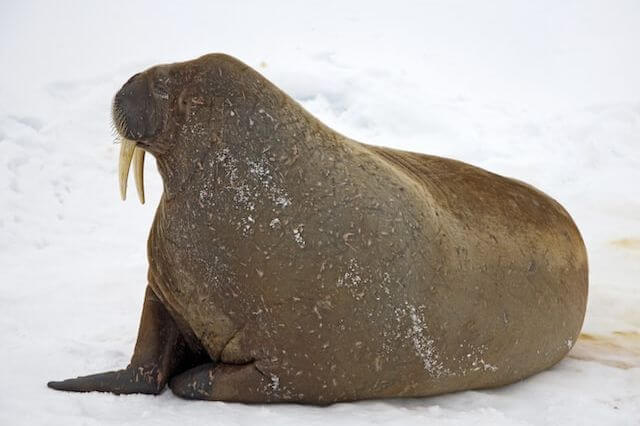 Walruses are species found in the Arctic Circle and are known for their long tusks and mustaches.

These tusked mammals spend approximately two-thirds of their awake hours in the water. When not in the water, walruses usually bask with their mates and babies; they are one of the most social mammals.

Both males and females have tusks, which work as teeth but also as their primary weapon.

Although they are not aggressive animals in general, during their mating season, they can become dangerous, especially to humans.

Walruses have several adaptations that enable them to survive in the freezing Arctic. One of them is the ability to drop their heartbeat while diving. 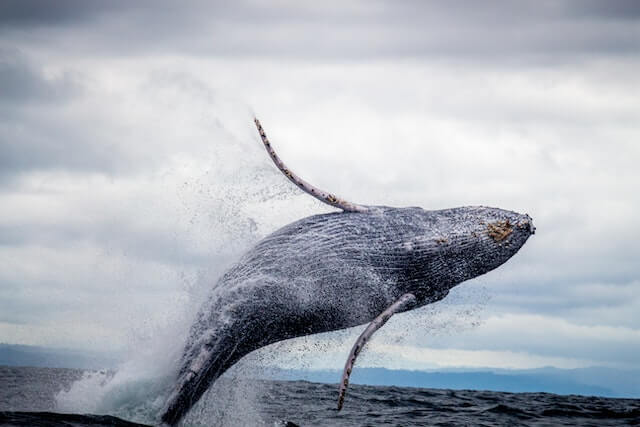 Weighing up to 200 tons, whales are the largest saltwater animals in the world. Some of them (blue whales) can be up to 100 feet long, which is the length of a basketball court.

Despite their gigantic size, whales are typically not dangerous to us humans, as we are not part of their regular diet.

One of the most interesting things about whales is that they produce specific sounds that can be heard for miles in the water. They can cry, sing a song, or howl for hours by pushing air into their heads, which is their primary communication method.

These aquatic mammals can be found in every ocean in the world, from tropical waters to the freezing Arctic and Antarctic waters. 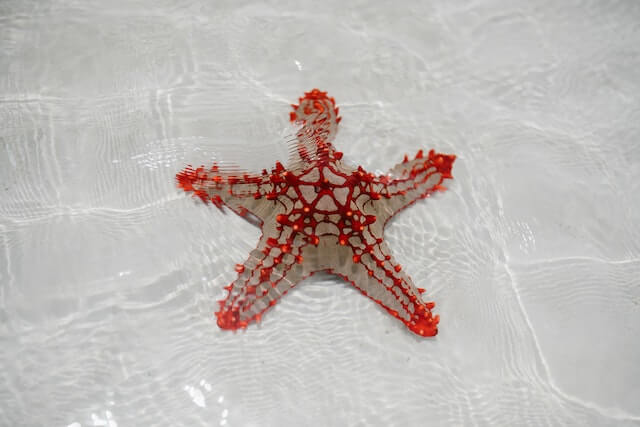 Starfish or sea stars come in more than 2,000 species, but most are five-arm creatures. They have calcified skin in bright colors like yellow, pink, or red. The skin helps them to camouflage and protect themselves from sea predators.

Starfishes are known for regenerating limbs or whole bodies by storing all their vital organs in their arms.

They are primarily carnivores feeding on mollusks, clams, and oysters by using their tube feet to catch prey.

Sea stars live in every saltwater habitat, from warm to cold waters. If you want to see these creatures, you’ll find them in tidal pools, coral reefs, seagrass, or rocky shores. 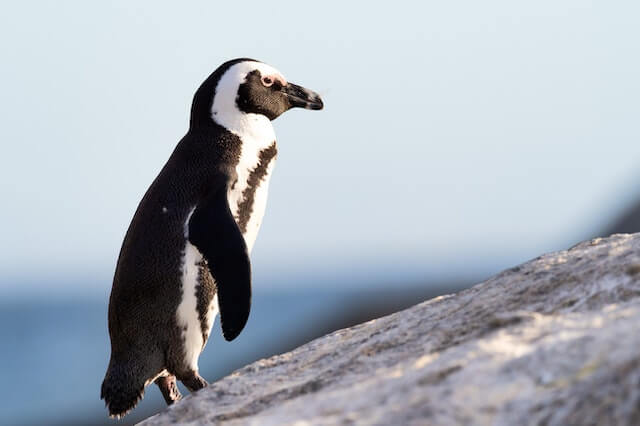 Penguins are flightless sea birds that live below the Equator. Most of the population can be found on Antarctica’s coasts and islands.

These waddling animals appear awkward when outside the water. However, they are one of the best swimmers and spend most of their lives in the ocean, hunting.

And while penguins spend 75% of their lives in the water, they tend to gather in colonies to protect themselves and get warmth on land. Additionally, penguins lay their eggs on the shore and tend to be loyal to their mates for years.

Climate change and human species are the biggest threats to penguins, and two-thirds of the species are now endangered. 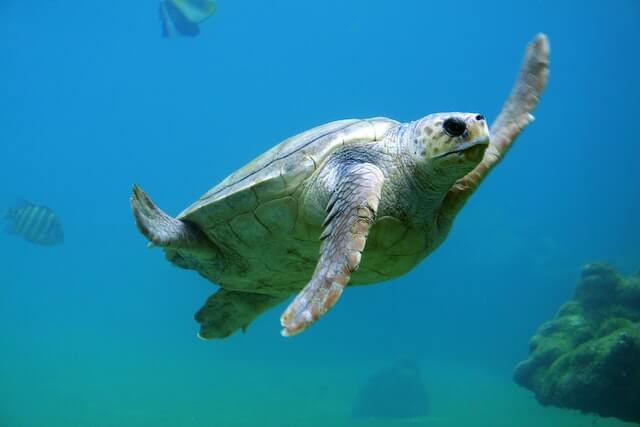 Sea turtles are known for their hard shells and long migration periods. Being reptiles, sea turtles can’t breathe underwater, but still, they have the ability to stay submerged for a couple of hours.

And while they spend 90% of their lives in the water, sea turtles lay eggs on the shore.

A female turtle digs a hole in the sand, lays her eggs, covers them, and then goes back to the sea. In about two months, young turtles will get out of the eggs and become new members of the saltwater fauna.

Sea turtles can be found all around the planet, from the tropical beaches of the Coral Triangle to the cold waters of California. Unfortunately, due to human impact, six of the seven species of sea turtles are endangered today. 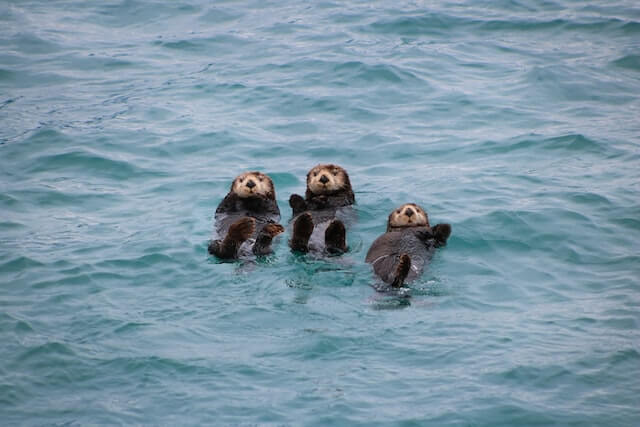 Sea otters are cute aquatic mammals that inhabit the Pacific Ocean. They are known for the fur that keeps them warm and dry in every weather and their webbed feet.

Sea otters are typically found in nearshore habitats, where they dive to the water’s bottom to hunt.

Another thing these fascinating saltwater animals are known for is their way of sleeping – by floating! Sea otters lie on their backs on the water’s surface and float through the sea, sleeping.

They even sleep in groups, so don’t be surprised to see a dozen of them sleeping together in the water.

Sea otters are always very clean and wash in the ocean after every meal. Their furry coats are waterproof, so they take meticulous care of them. 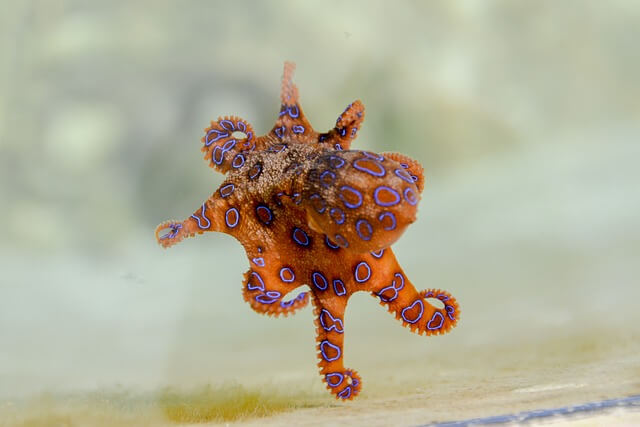 Octopuses are unique saltwater creatures known for having eight arms, nine brains, and huge eyes. You will find them in every ocean, but they prefer warm waters in tropical climates.

Depending on the species, they can live on the water’s surface or sea floor.

Every octopus swims backward by blasting water through its siphon and sucking other animals into its mouth with its arms. Their long arms also help them reach even the smallest holes in the sea floor while looking for food.

When an octopus feels threatened, it blasts ink fluid to confuse the opponent or even change colors. They tend to live alone on the rocks and go out only when they are looking for food. 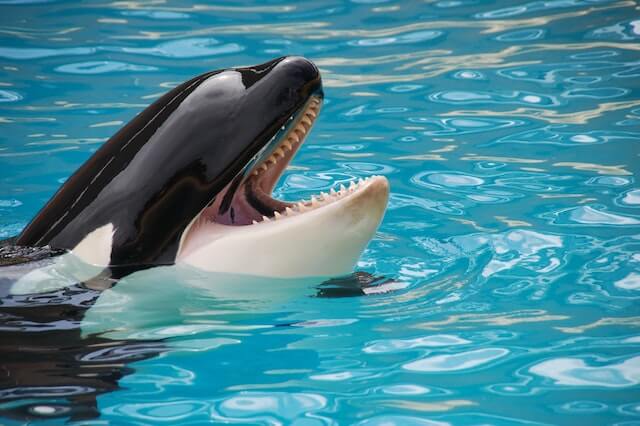 An orca, also known as a killer whale, is one of the largest predators in the sea world. You can easily recognize an orca by its black-and-white coloring.

They are quite social animals and use different sounds to communicate all the time.

Orcas can be found in all of the world’s oceans, from the Equator to the Arctic, though most are found in colder waters.

Killer whales eat everything – sea lions, small whales, sea birds, fish, and even penguins. They have different hunting techniques for different animals and tend to hunt in groups of up to 40 orcas. 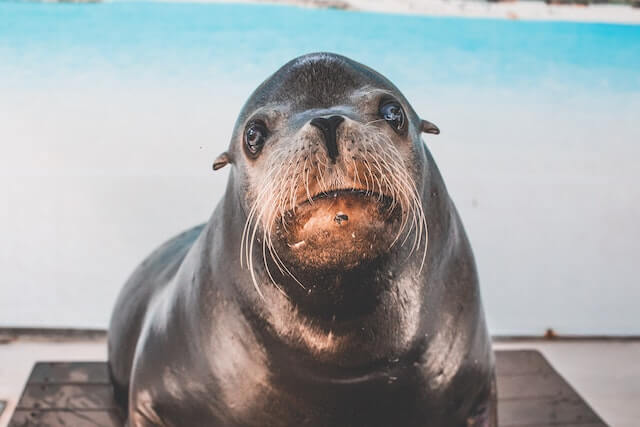 The last member on our list of animals that live in saltwater habitats is the sea lion.

Sea lions are found around the Pacific Ocean’s shore, and by residing in such frigid environments, they are able to regulate their body temperatures.

You May Also Like: Animals That Live in a Lake