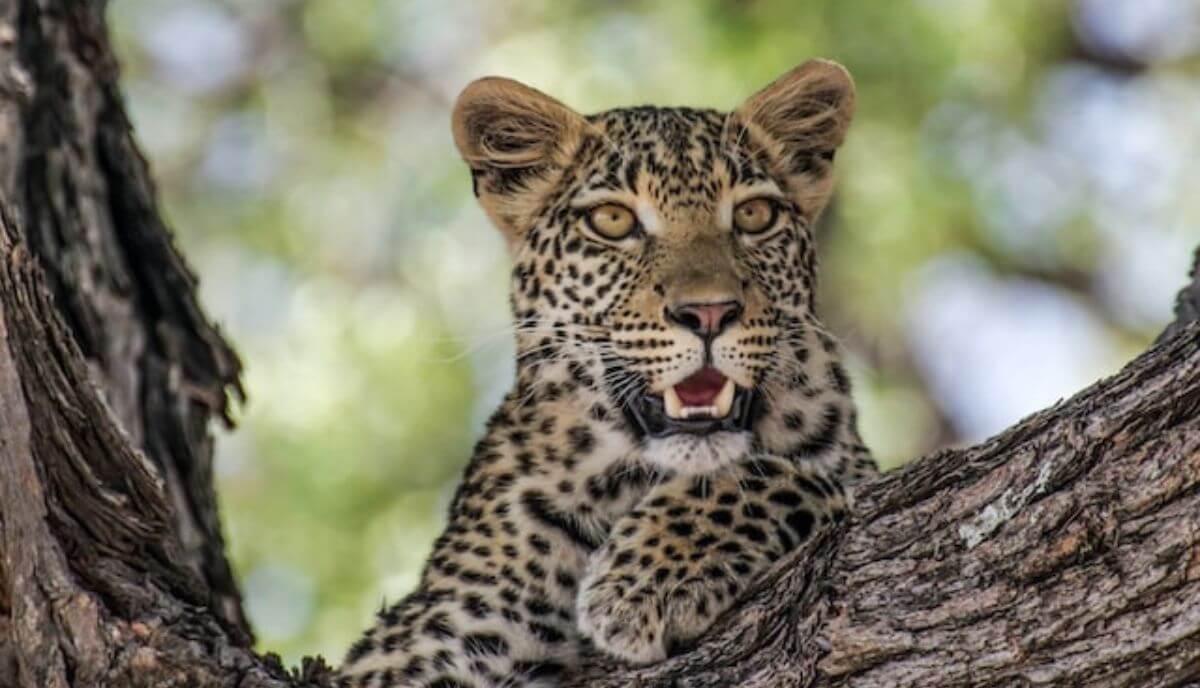 Can you keep a leopard as a pet? Legally, the answer can be yes, depending on where you live. But should you own a pet leopard? Probably not.

The thought of having such a majestic animal as a pet may seem like a cool and fun idea. But the reality is that leopards are wild predators and not housecats.

However, if you still want to learn more about keeping a leopard as a pet, which states allow it, and how much it would cost – keep reading!

Can You Have a Pet Leopard?

There’s no doubt that leopards are beautiful and majestic creatures, and the biggest enthusiasts among us have probably wondered whether you can own a leopard as a pet.

Keeping wild animals as pets is problematic for a lot of reasons. For now, it’s important to note that keeping leopards as pets is illegal in most places, and even where it’s legal, you would need to get a special license to own one.

As a result, it would be a tremendous expense that few of us could afford.

More importantly, the leopard belongs to the wilderness, and keeping it as personal property is cruel. These wild cats require much more than a person can give, whether that means creating the ideal environment, feeding them fresh meat every single day, or providing enough entertainment so they can release their energy.

Not to mention that wild animals are highly destructible. If you consider keeping one as a pet, you can kiss your furniture and personal belongings goodbye!

Is it Legal to Own a Pet Leopard?

Whether owning a pet leopard is legal depends on your location and animal subspecies. In the US, specifically, it varies from state to state. Overall, it is not legal to own leopards as pets in most countries in the world and in most US States.

Interestingly, the following states in the US allow keeping leopards and other large cats as pets with no restrictions: Nevada, Oklahoma, Wisconsin, Alabama, North Carolina, and South Carolina.

Even more, states allow these wild animals to be kept as personal property with special permits. However, it is still illegal and highly regulated in most locations in the US.

To receive a permit to keep an exotic animal as a pet, you need to prove that you can take care of it, including home inspections. On top of that, you may need to cash out a lot of money to get a license to own a leopard – and annually renew that license.

Although keeping a leopard in some US states is legal, that doesn’t mean it’s a good idea.

Can Leopards be Domesticated?

No, leopards can’t be domesticated, at least not anytime soon. Domestication is a process that takes many years of modification of DNA through a process of selective breeding, even with naturally docile animals. Leopards are not docile and certainly not a good candidate for domestication.

When an animal is domesticated, it signifies that people have complete control over its behavior. It implies that the leopard would treat people with the same respect as a dog or horse. It also means that their coexistence endangers neither the health of people nor that of leopards.

Many exotic pet owners have argued that leopards can be “tamed”; however, this is also highly speculative.

We’ve all seen cute videos of leopards bonding and playing with their trainers. Nonetheless, keep in mind that the trainers are experts in their field, and a regular person could not tame a wild leopard.

More importantly, even a tame animal preserves its natural instincts. A trained animal can “snap” at any moment and act on its instincts.

As wild cats are predators, that means their instinct is to kill. Because of this fact, leopards are dangerous and could easily maim a person if they feel threatened in any way.

It is virtually impossible to predict what could trigger a leopard to attack, which is why it’s difficult to say that any wild animal is tamed. Overall, the younger the cub is at the beginning of the taming process, the better results will be as the animal grows.

Just remember that even a perfectly trained leopard can act unpredictably, with potentially lethal results.

Leopards do not make good pets for numerous reasons.

First and foremost, leopards are incredibly dangerous predators. As previously mentioned, even if the animal has been trained as a cub, its instincts can be triggered.

Once a wild cat acts on instinct, it can seriously injure or kill someone. There is nothing that can stop it since it is impossible for a person to physically subdue a 200-pound animal.

As a result, keeping a leopard as a pet can be a ticking time bomb. Whatever your reasoning for keeping a wild cat in your home, rest assured that it is not worth a life.

These animals aren’t domesticated like cats or dogs. They are wild and will behave like it, no matter how much training they have undergone.

Finally, it is highly unethical to keep a creature that belongs in the wild as private property.

Pet Leopards are Illegal in the Most States

Even if you have everything required to keep a tiger as a pet (which is unlikely), don’t forget that keeping exotic animals is illegal in most US states for a good reason.

Leopards are considered an endangered species (Leopards | Facts & Endangered Status | Born Free), and buying one to keep as a pet is unethical.

It is safe to assume that even the countries that currently allow you to keep wild cats as pets will soon prohibit it or, at the very least, increase their regulations regarding this topic.

Can you imagine what a vet bill would cost an adult leopard? Leopards are exotic and would require special care that isn’t readily available.

To keep this predator healthy, you would need an expert on hand at all times, which could be next to impossible to find.

On a similar note, these beasts have special diets requiring a few pounds of fresh meat daily. A highly active leopard can eat up to 20 pounds of food daily in the wild, with high energy expenditure.

Even without considering the cost, providing the necessary nutrition for this majestic creature would be challenging.

Lastly, keeping a leopard as a pet would be unbelievably expensive. Even if you could afford the animal itself, you would need to get a special permit to keep it.

Then you would need to optimize your property to meet its needs, which would mean plenty of land, hunting opportunities, and a large fence.

Next, the aforementioned food and vet bills. Transporting the pet would be next to impossible, and you would need to keep expert trainers around the property at all times.

It would cost millions of dollars if you wanted to provide the leopard with a good home.

How Much Does a Leopard Cost?

The cost of a leopard depends on multiple factors, including subspecies, age, sex, etc. For example, male snow leopards can set you back over $5000. You should generally expect to pay at least $2000 for a leopard cub, no matter the species.

However, remember that these prices are just for the animal itself and don’t include licenses, permits, vet costs, etc. Even if you could afford to buy a leopard, the cost of actually caring for one would quickly add up to thousands and thousands of dollars.

On top of that, many wild cats for sale come from untrustworthy sources, aka black markets. It is impossible to ethically breed an exotic animal to be kept as a pet.

As a result, there is no guarantee of the “quality” and health of the animal you’re buying.

Keeping a leopard as a pet may seem like an exciting experience. However, getting the necessary licensing to keep one in a domestic setting is costly. These beautiful cats should not be kept in homes and cages, as they belong to the wilderness. And most importantly, a leopard staying in a household could jeopardize the health and safety of people and other animals.

If you want an elegant and majestic predator as a pet, one that will not accidentally kill you, get a cat.

Thank you for reading. If you liked this article, you might also find interesting another pet post: Can You Have a Pet Dolphin?