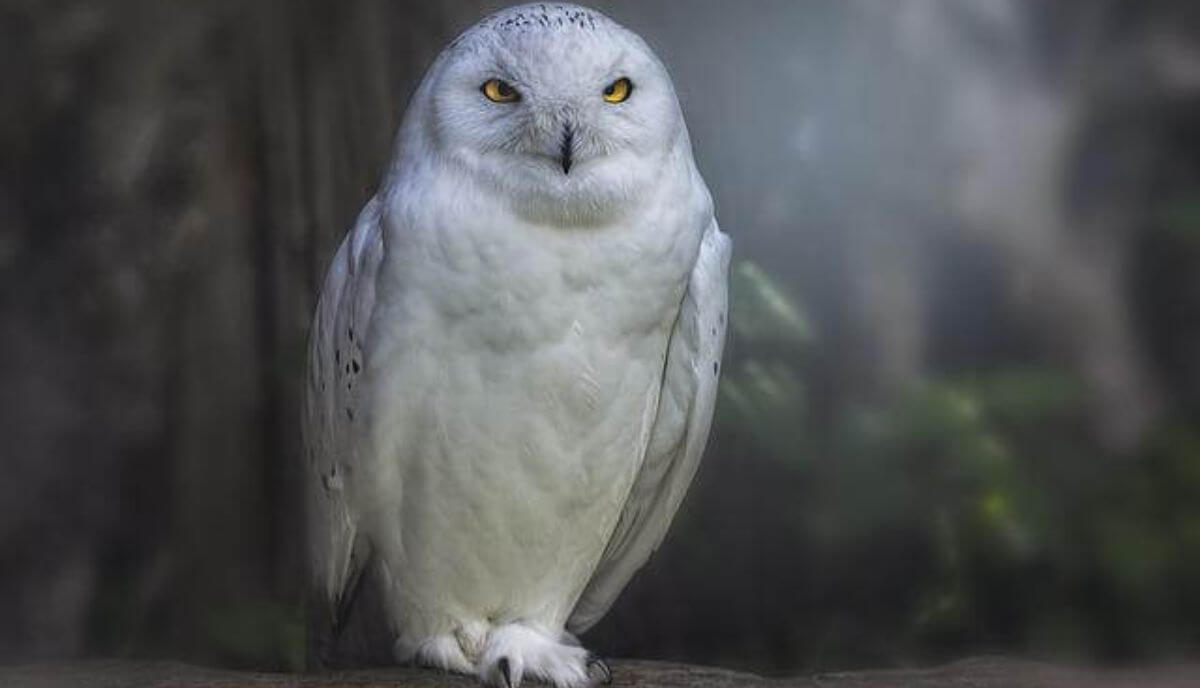 Lately, I have started practicing birdwatching, and I have become more and more interested in these mystery birds’ physical appearance. Which led me to think: how many owl colors are there?

The colors of owls can range from white, gray, tan, brown, to even rufous. These colors may vary (depending on the owl species); however, brown is the most common owl color.

These colors are more like solid colors, as owls are typically not bright-colored-looking birds.

Let us learn more about owl colors and their pretty features.

What Colors Can Owls be?

The most typical color of owl feathers is brown. However, a few other color variations can be seen in wild owls.

The color white is one of the versatile colors found in almost every animal. It helps the animals blend or stand out from their surrounding.

As for owls, some breeds have a white color to create a beacon. The purpose is to use it as a reflector, signaling other competitors about the extent of their territory.

The most popular owl with white color is the snowy owl. A male snowy owl has an all-white appearance, while a female snow owl has dark brown lines over her white feathers. 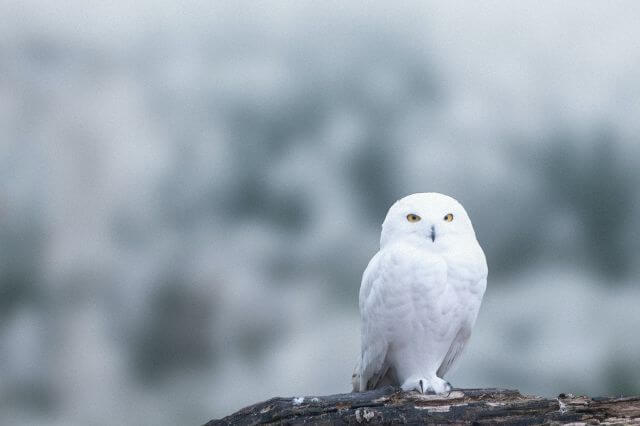 Interestingly, there are cases where some owls suffer from albinism, resulting in their white feathers. The great horned owl has been seen to suffer from it the most.

With albinism, the great horned owl can have pink eyes. Although, it is not always the case for these birds.

Albinism is not common to all birds and is treated as a rare case.

Rufous is a term used to describe a color that is reddish-brown, brownish-red, or rust. It is a bold color and not like your typical red.

Some species of owl have been depicted to have the color rufous. With its shade, the color helps the owls to blend in with their surrounding.

The rufous owl is one of the species to have this striking color. However, some rufous owls may look as if they have brown, reddish-brown color feathers. 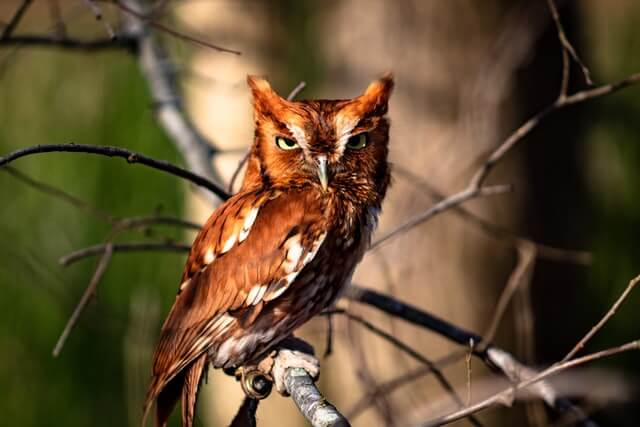 Some screech owl species have a rufous color, while others have a gray color. Even with different colors, it is easy to identify eastern screech owls due to their complex bands and spots pattern.

Gray is described as a mixture of colors, black and white. It also has a wide range of shades, from the darkest to the lightest shade.

This color is also commonly found in many owl species. Gray is usually mixed with other colors. 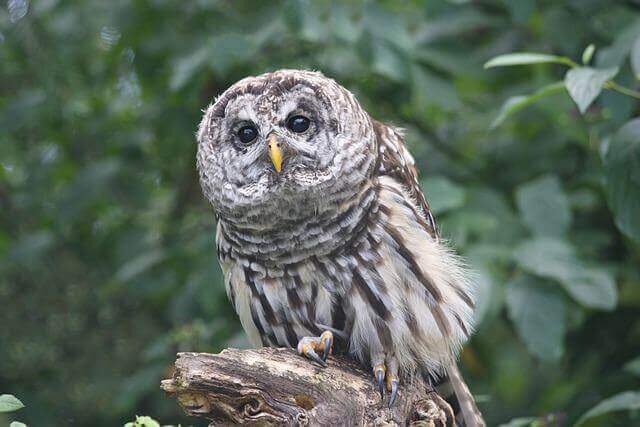 The great gray owl is also considered the largest owl in terms of length. This massive owl is found in the Northern Hemisphere, creating evergreen forests and fir forests as its home.

Their color fits well in their surroundings, which are usually covered with snow and dense forests. And, just like other owls, these owls are nocturnal animals.

Another standard owl color is tan. Just like brown and white, tan appears in most owl feathers.

This color helps owls camouflage in branches and tree trunks. Tan is comparatively known as a paler version of the brown color.

The barn owl has a good mix of colors, including tan, brown, and white. This owl is the most widespread owl species, and it can be found almost anywhere in the world, except for desert and polar areas. 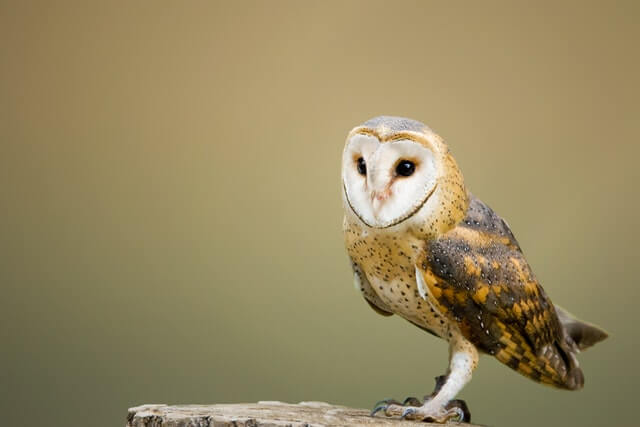 The bird’s uncanny look has been used to depict wisdom and terror in various books and movies.

Living in forests and open plains, a barn owl relies on its tan color to blend in its habitat. Being nocturnal beings, barn owls are hardly ever seen during daylight.

The most common color among owls and even to all birds is brown. It is one of the best camouflage colors as most owls live in the forest, mountains, deserts, and plains.

Brown is sometimes misunderstood as tan. However, these two colors are entirely different. Brown color tends to be bolder and darker. On the other hand, the tan shade is lighter, almost beige.

Brown-colored owls are the commonly depicted types of owls. The tawny owl, also known as the Brown owl, is one of them. This bird is found in the Eurasian woodlands.

The tawny owl has brown feathers that help it survive in its habitat. The color is passed to the next generation as the feather color is hereditary.

However, scientists observed that this brown bird is getting browner. It appeared that climate change contributed to this unusual color shift.

The tawny bird was initially more reddish and grayish in color.

What is The Most Colorful Owl?

Owls usually have a neutral color ranging from brown, gray, and white. Yet, the spotted wood owl has a more diverse color.

Unlike other owls, it has a unique yellowish-brown or rufous-colored face. Aside from the pop of color, the spotted wood owl’s feathers also have the colors brown, white, and black adorning them.

In general, though, there are no really colorful owls. Almost all of these owls have muted and neutral colors, and the most bright color an owl can have is white.

What Color Are Owls’ Eyes?

●    Yellow Eyes – Yellow is the most common color of owls’ eyes. Their brilliant color compliments their neutral feather colors, as yellow eyes easily pop in contrast to owls’ feathers.

Most owls with yellow eyes are active in daylight and sleep during nighttime.

An example of an owl with orange-colored eyes is the Eurasian eagle owl.

●    Brown and Black Eyes – Many owls have brown or black eyes or a mix of two shades. Having one of these colors means that an owl is nocturnal.

However, these colors also indicate that they cannot hunt well in the dark. Though, the dark eye color helps them camouflage better.

These colors are evolutionary traits passed on to their offspring.

What Colors Are Owl’s Feet?

The colors of owls’ feet are either black, gray, or ivory. However, their colors may also run along with these shades, and they can be lighter or darker depending on the owl species.

Although, some owls have yellow feet. These brightly-colored feet look like other birds’ talons.

Owls have serration on their feet that helps them get a tighter grip on their prey. They also use this adaptation for grooming.

The underside of owls’ feet is rough, which also serves as an additional tool for hunting.

What Color Are Owl’s Eggs?

Owls’ eggs are white, though some eggs may have discoloration. The egg whiteness is attributed to owl parents hiding them.

Owls hide their eggs out of the view, usually covered. It also means that it is not exposed to any harsh lighting that can cause pigmentation on the eggs.

As for the sizes of their eggs, it depends on the owl breed. Barn owls lay small white eggs, 30% smaller than other owl breeds.

In Summary on Owl Colors

Owls are not as colorful as other bird species. They have more neutral, tone-down, and earthy colors. Owl colors range from white, tan, brown, gray, to rufous.

There are certain instances that they have hints of other colors, such as black and yellow. These colors are present as an additional trait.

Although with earthy feather colors, owls have one of the most prominent eye colors. Most owl breeds have yellow or orange eyes.

These colors tend to stand out not only during daylight but also at nighttime.

If you liked this post, here is a recommendation of another popular read: Are Owls Intelligent?