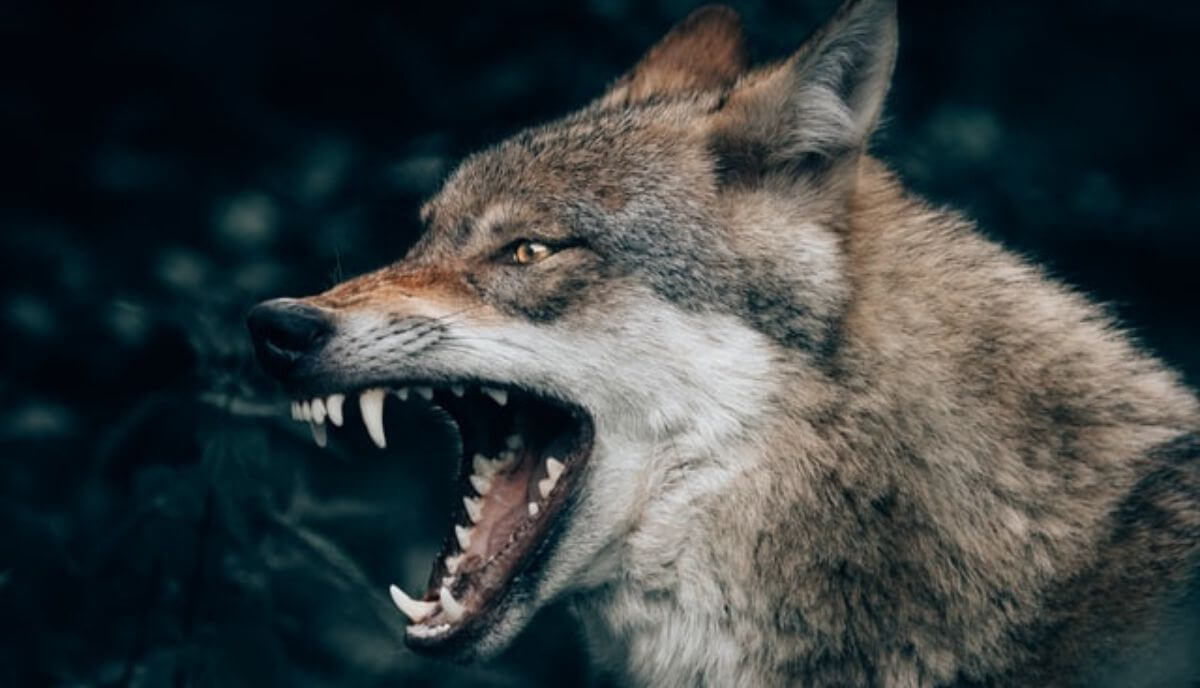 These wild and highly intelligent animals hunt in packs utilizing cooperation strategies. Wolves are relatively widespread, having occupied many regions in North America for hundreds of thousands of years.

Since they thrive in various habitats, humans often come in contact with these creatures. Despite being wary of them, wolves can attack people when provoked, but which of these attacks are the most fatal? Which is the most dangerous wolf breed?

In the rest of this article, we will discuss the characteristic of some of the world’s most dangerous wolves.

5 Most Dangerous Wolf Breeds in the World

Wolves belong to the family of Canidae, and there are three different wolf species divided into about 40 subspecies.

Among these, the top 5 deadliest and most dangerous ones are listed below:

The north-western wolf is a subspecies of the grey wolf and has roamed North America for hundreds of thousands of years. Their coat is mostly black or white with a variety of colors other such as grey or beige.

They are also known as Mackenzie valley wolves, found in the upper region of the valley they’re named after.

North-western wolves are purely carnivorous animals, and although they aren’t regular consumers of “human meat,” their carnivorous nature means it’s still an option on their menu.

These wolf breeds also hunt in packs, making them more dangerous to humans. Since they’re cursorial, running away from them is not smart as they are fast and have stamina.

Mackenzie valley wolves have a bite force of about 400 pounds of pressure per square inch, and their teeth are sharp and so are their claws.

On the bright side, these wolves are wary of humans. They will attack only when irritated or disturbed, so if you spot on in the wild, remember to keep a fair distance away from them.

Related: Most Dangerous Big Cats in the World

Arctic wolves are another grey wolf subspecies that inhabit regions above the northern tree line.

Despite being slightly smaller than the north-western wolves, the Arctic wolves are also dangerous, being the fastest wolves with an insanely powerful bite force.

They are also resilient, able to live for up to four months in the wild without food, and survive the coldest climates.

In contrast to other wolf species, Arctic wolves rarely come in contact with people. Therefore, these polar wolves (as they are also called) do not fear humans.

Over the years, there have been several accounts of arctic wolves approaching people and even going as far as making physical contact with them.

In fact, there are records of wolf attacks that occurred in one of the northernmost regions in the world, the Canadian Military base in Alert, Nunavut, where the wolves have lived in close proximity to humans and become accustomed to them.

The third species on our list of most dangerous wolves, the Eurasian wolves, are canids whose range is restricted to European and Asian countries, hence their name.

These big and strong wolves inhabit tundras, plains, and mountains of these regions and have a peculiar-looking coat, with black, white, and tan fur scattered all over their bodies.

Their size varies from region to region, with the heaviest recorded weight of a Eurasian wolf being nearly a hundred and sixty pounds.

Also known as the common wolf, these breeds are the largest subspecies of grey wolves worldwide, with the ability to live for nearly two decades.

The powerful jaws and large teeth of these grey wolves make them extremely dangerous. And to prove that point, there have been numerous attacks of wolves on humans over the years in Europe.

From cases of wolf bites perpetuated by rabid animals in Latvia to more than a hundred deaths caused by man-eating wolves in Estonia, it’s clear these creatures are incredibly vicious.

Not only humans, but it also seems that there have even been government-authorized wolf culls throughout countries in Europe in recent years due to their perceived overpopulation that led to the killing of livestock, especially sheep.

Common wolves are now legally protected in most European countries and are making a recovery.

Yukon wolves, as they are also referred to as are another subspecies of the grey wolves native to regions in Canada, particularly Yukon (hence their name), British Columbia, and Interior Alaska.

The interior Alaskan wolf has a multi-colored pelt with white, black, tan, and tawny grey fur scattered all over its body.

Like every other wolf species, they hunt and live in packs while their lifespan ranges from four to ten years.

These deadly wolf subspecies of grey wolves are also incredibly large, with the females averaging nearly ninety pounds and the males well over a hundred.

Interior Alaskan wolves measure on average thirty inches from the tip of their snout to the ends of their tails. They can take on prey as large as elks and bison, go for several days without eating, and hold up to twenty pounds of meat in their stomach at once.

Yukon wolves have a formidable and effective hunting tactic, circling their prey, so they don’t have any means of escape.

This, alongside their menacing features, makes them one of the most dangerous wolves on the planet.

The last member on our list of deadliest and most dangerous wolves is the Iberian wolf. Iberian wolves are subspecies of the grey wolves that occupy the north-western Iberian Peninsula.

They are big-sized predators, and compared to the Eurasian wolves, the Iberian wolves are slightly thinner, with several black marks on their forelimbs and long tail.

Also, unlike the interior Alaskan breed, these wolves hunt in packs that are fewer in number and also tend to prey on smaller mammals like rabbits and even fish.

Unfortunately, Iberian wolves are barely three thousand in number and hence face a serious risk of extinction. Recently, the Spanish government has initiated a ban on the hunting of Iberian wolves, as the species is endangered due to the now illegal practice of poaching.

This decision has been met with hate as farmers in the country argue that Iberian wolves are pests threatening their livelihood source.

Like many other wolves on this list and animals in the wild, the Iberian wolves are wary of humans and are highly unlikely to attack, but when they do, these grey wolves can do some severe damage.

With this, we complete our list of the most dangerous wolf breeds in the world.

Amongst 40 wolf breeds, North-western wolves are the largest and, at the same time, considered the deadliest of all. However, wolves are usually not dangerous to humans, and despite the rumors, attacks on people do not happen frequently.

Most attacks of these canids on people can be attributed to rabid wolves, and there are very few cases in which wolves have attacked humans to feed on them.

Thank you for reading. If you enjoyed this article, here’s a recommendation of another popular read: Most Dangerous Crocodile Species.