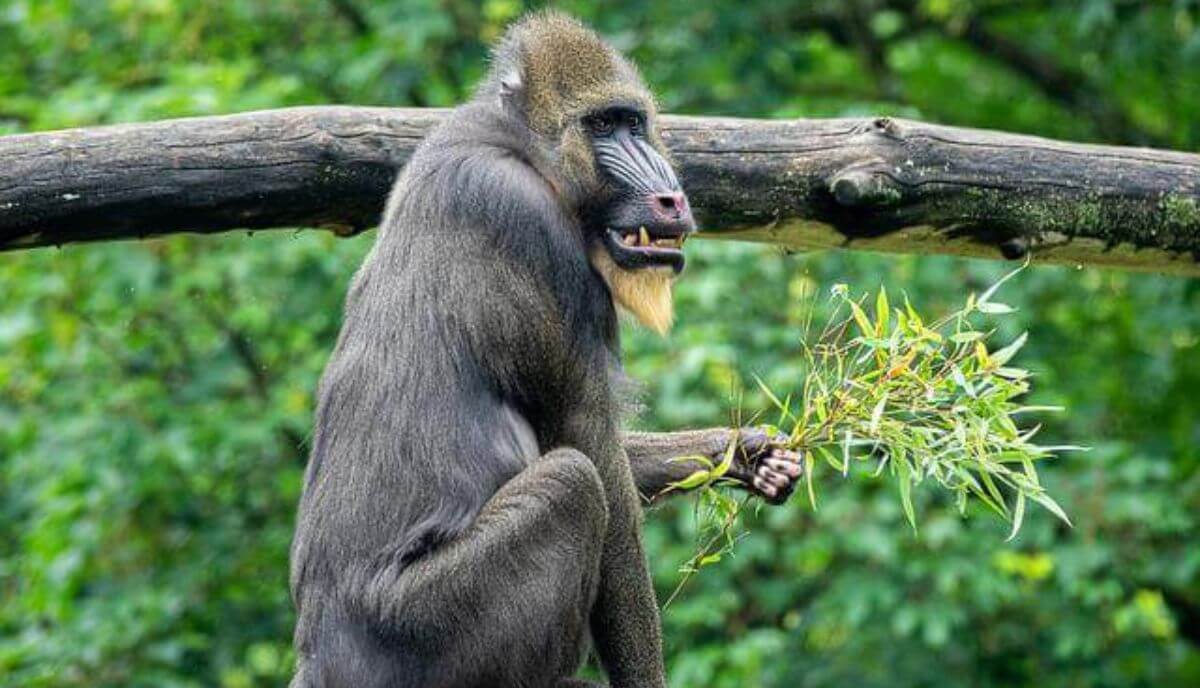 If you are out in the jungle, you should take all the wild animals seriously, but there are some that you can interact with and some that you should avoid at all costs. The same goes for monkeys, they might be cute, but they are not all harmless.

So what is the most dangerous monkey in the world?

Mandrills are the most dangerous monkey species on the planet. They are the world’s largest monkeys with 2-inc long, sharp canine teeth and powerful jaws. A mandrill bite could cause severe injuries and even rip off a part of a human’s skin.

In this article, you will learn more about mandrills and the other dangerous monkeys around the globe.

Most Dangerous Monkeys in the World 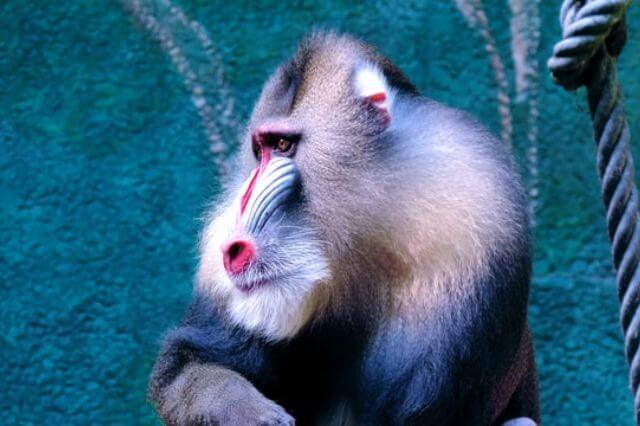 Mandrills are not only dangerous, but they are also large monkeys. Adult males can weigh up to 88 lbs. They have carnivore-like teeth, claws, and a bite that can result in serious wounds.

Mandrills would not actively attack humans in captivity or in the wild, but they may bite you out of self-defense or fear. So if you get close to one, try not to provoke it, so it doesn’t lash out at you.

Related: Are Mandrills Dangerous to Humans?

Apart from looking fierce, mandrills are actually brilliant animals that use tools such as rocks and sticks to extract food. Some evidence shows they even use tools to clean their ears and nails.

The male mandrill has an unusual coloration: blue face and lips, black hairless body, white chest, and orange buttocks. The female mandrill is slightly smaller than the male and lacks his facial markings.

These markings are a sign of health and strength. The more testosterone, the male, has, the more vibrant his colors are.

Mandrills can be highly aggressive towards one another, particularly during the breeding season. During this time, the males will fight for dominance and territory rights.

If a male sees another male in his territory, he may attack him, causing severe injury or even death if he cannot get away in time.

Female mandrills also fight aggressively during the breeding season, but this is usually only with other females who are trying to mate with the same male at the same time as they are. 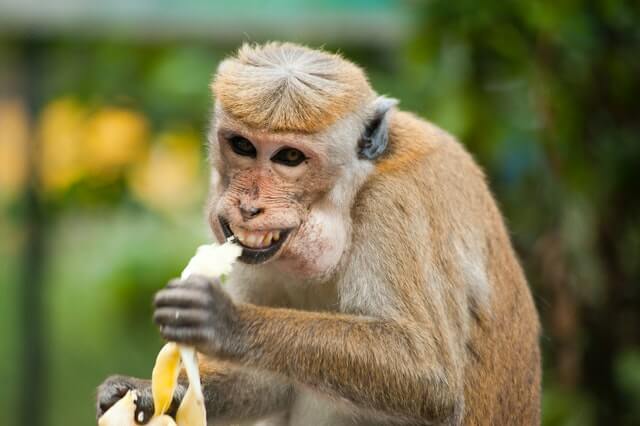 Macaques are dangerous to humans because they can transmit Herpes B through bites or scratches of an infected animal. Other threats from the macaque include pox and rotavirus.

These viruses are not harmful to the monkeys but can be infectious to humans and, in rare cases, cause death.

Most macaques only become aggressive when they feel threatened or cornered by a human being — or another animal — but this can vary depending on the individual animal’s temperament.

There are many different macaque species, including the Japanese macaque and the Barbary macaque. These monkeys are known for their adaptability, intelligence, and social behavior.

Macaques live in large groups but can live in small groups or even alone. Studies show that these animals can even display cultural differences between the groups.

A group of macaque monkeys follows a strict hierarchy. The smaller the group size, the more likely it is for competition between males over female access to females.

Males will compete for mates by fighting with each other. When they fight, they use their teeth and hands to bite and scratch each other’s faces and arms.

Sometimes they fight so violently that they break bones or tear off patches of skin! Females do not fight much but compete for food and mates. 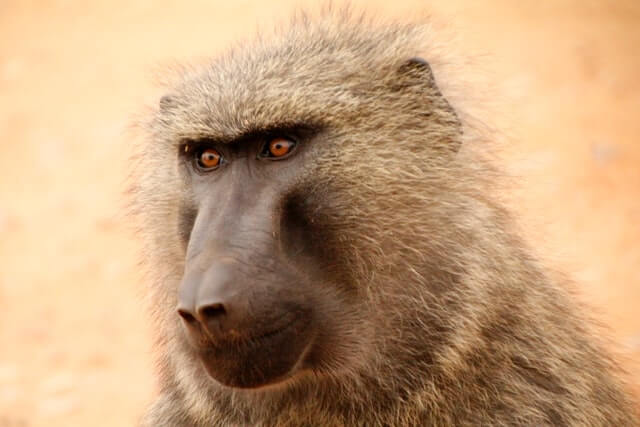 Baboons are among the biggest monkeys in the world. The size depends on the species, but the largest baboons can weigh up to 82 lbs.

In addition, they have strong jaw muscles and long canine teeth. Baboons are omnivores and opportunistic feeders, which means they would eat almost anything they can find.

Like most monkeys on this list, baboons are not dangerous to humans if they have no reason to be. But because they often come in contact with humans, these attacks do happen.

In most cases, the reason for the incident is when the monkey feel threatens and wants to protect itself or its young.

Another reason why these monkeys might attack is if they see you holding food or some item they would like to have.

This often happens in areas where tourists feed monkeys and animals have associated humans with food.

Baboons live in groups, usually with around 50 members. Size can be smaller or even up to 250 members. The attack of such a large group can certainly be scary.

In reality, baboons are more often the victims than the perpetrators. A large troop can cause severe damage to crops and farms. Due to this, attacks on baboons by farmers are common. 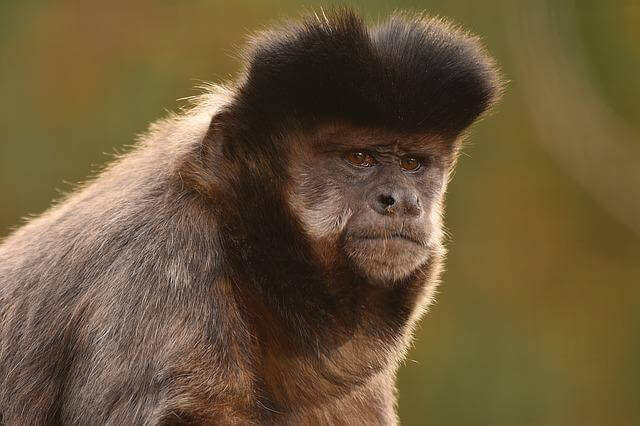 You probably didn’t expect to see capuchin monkeys on the list of dangerous monkey species. Well, under normal circumstances, these animals are not dangerous.

Capuchin monkeys are generally gentle creatures who enjoy human companionship. However, if you ever have to deal with these animals in captivity, it’s essential to understand that they may sometimes be unpredictable and dangerous.

Capuchin monkeys are very agile animals with sharp teeth and strong jaws, so if you provoke one of them by approaching too closely or making sudden movements, it could attack.

Capuchins are super cute as newborns, and that’s why they became desirable as pets. Unfortunately, as they become older, they can get quickly bored and exhibit habits that become more destructive.

They frequently become unsuitable pets, which is why many get abandoned or mistreated. They demand an enriched and active lifestyle. When raised by humans, they often do not receive enough stimulation.

You can find capuchin monkeys in many habitats, including rainforests and woodlands. They tend to live in smaller groups than other primates, with an average of six members per group.

The biggest capuchin monkey weighs about 11 pounds and has pointed canines. After puberty (usually around five years), their teeth become strong and can be used as weapons if needed.

Sharp whistling is a specific form of warning cry used by capuchin monkeys to alert other group members when there is danger. 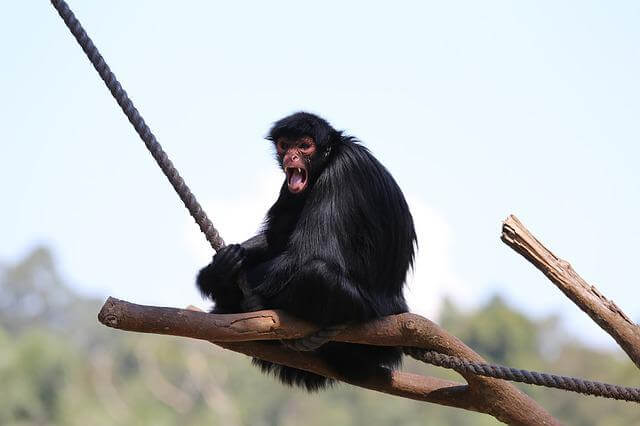 Spider monkeys are known to be fiercely territorial. Touching or getting in their personal space is unsafe because they can become aggressive and bite. There are many videos of such events online.

Even though there are no records of a fatal attack by a spider monkey, they can cause serious injuries.

If detained in captivity, the monkeys can develop mental health issues that make them bite, scratch, and harm humans. Even in the wild, it is best not to approach or feed these animals if you see one.

They’re also known for their loud vocalizations, which make them easy to spot even from a distance.

Spider monkeys are the only New World monkeys that have prehensile tails. This feature allows them to use their long arms as they swing through the trees.

In addition, they can also move quickly in this way and use their tails to help them balance when on the ground.

Spider monkeys live in groups that consist of several males and females with offspring of various ages living together in large trees.

In these male-bonded, fission-fusion societies, male spider monkeys engage in a frequent, direct, and fierce rivalry with outside males for sex with females who can move between groups.

Spider monkeys weigh about 17.5 pounds on average but don’t take them for granted.

In some parts of the world, people keep monkeys as pets. Detainment can be pretty dramatic for these animals since they lose an essential part of their freedom and often bond into ill-fated units with other monkeys.

Monkeys are known to be unpredictable and highly dangerous when they are away from the jungle. Mandrills and macaques are some of the most dangerous monkeys in the world. They can attack anything they consider a threat or danger to themselves.

However, each monkey species from the list can be potentially dangerous to humans if not treated properly. Monkeys, like every other non-domesticated animal, possess wild instincts, and in order to minimize the risk of being attacked, one should behave towards them with caution.

In the areas of the world where the jungle is destroyed and replaced with farmland, wild animals and humans can often be in conflict. In India, for example, only dogs bite more people per year than monkeys.

Thank you for reading. If you enjoyed this post, here’s another popular monkey article: Top 5 Most Dangerous Big Cats