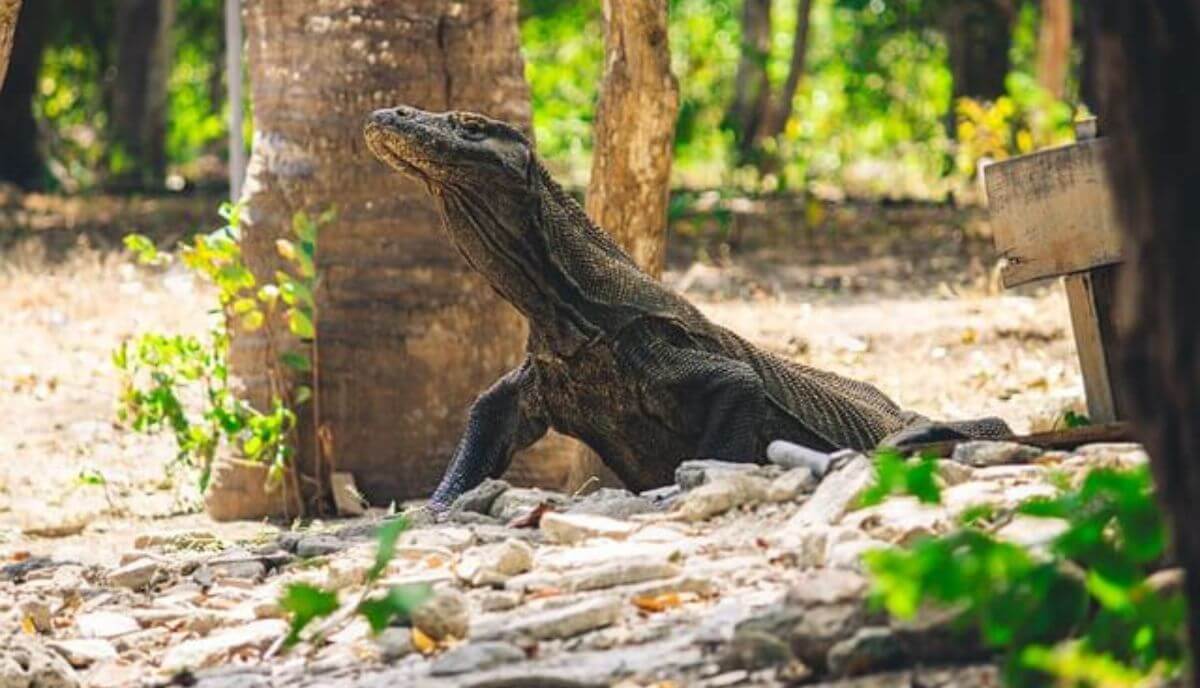 We all know the crocodile as the most dangerous reptile, but what about other members of the reptile family?

Ever wondered what the most dangerous lizard is?

Let’s look at some of the world’s most powerful, frightening, and downright deadly lizards.

Top 5 Most Dangerous Lizards In The World

There are more than 2,500 extant lizard species worldwide, ranging from 0.53 inches to 10 feet in size.

Amongst all of them, below listed are the most dangerous lizards:

Reaching up to 2.5m (8 ft. 2 in) in length, Australia’s largest lizards are apex predators, feeding on everything and anything they can.

These bulky monitor lizards can weigh over 44lb (20kg) and run at speeds of up to 25mph (40kph). They hunt by chasing down their prey and kill by shaking it in their powerful jaws.

In addition, perenties are not picky eaters. They are known to eat anything from birds, to turtles, to eggs and even other monitor lizards.

They can even tackle large, potentially dangerous prey, such as kangaroos and some of Australia’s most venomous snakes. Perenties will even go so far as to eat each other!

However, despite their fearsome reputation, perenties are actually very shy around humans. If they see a human approaching them, perenties typically either flee or freeze and flatten themselves into the ground to hide.

Bites on humans are rare and usually happen in captivity when the animal is cornered. When bites do occur, they can be very unpleasant, even dangerous.

This is because perenties, like many monitor lizards, produce oral secretions believed by some to be venomous. Venomous or not, a bite from a perentie will quickly turn septic and requires immediate medical attention.

With a name like “Gila monster,” it is no surprise that this lizard has been the subject of myth and rumor for generations. This is even though the Gila monster only reaches around 22 inches (56cm) in length.

But don’t let its diminutive size fool you!

The bite of the Gila monster is said to be excruciatingly painful, more painful than any other living vertebrate. Though rarely fatal, the Gila monster’s bite is about as venomous as that of a western diamondback rattlesnake.

The bite can cause vomiting, fever, breathing difficulties, low blood pressure, fainting, and extreme pain, lasting up to several hours. To make matters worse, these dangerous lizards tend to hang on when they bite and may not release the victim without intervention.

However, Gila monsters are slow, shy, and generally docile creatures who only attack as a last resort in self-defense.

They feed on eggs, carrion, rodents, lizards, and other small animals. It is believed that their venom evolved as a defense mechanism rather than to aid in catching prey.

Despite what their name suggests, crocodile monitors do not live in water. They are arboreal, spending much of their lives in trees.

Crocodile monitors are among the longest species of monitors in the world, reaching up to 8ft 2in (2.5m) in length on average. However, there are many claims that they can get much bigger.

Much of their length comes from their tails, which are very strong and semi-prehensile. They use their tails to grip branches when climbing, as well as for balance when leaping from tree to tree, and even as a weapon.

Not that they need weapons in addition to their sharp, fang-like teeth, powerful jaws, and slightly venomous saliva.

Crocodile monitors generally avoid all contact with humans but are known for their aggression, intelligence and unpredictability when cornered.

Despite this, only one human has ever been killed by a crocodile monitor, resulting from infection following a bite.

Unfortunately, crocodile monitors are the victims of cruel hunting practices by tribespeople in their native Papua New Guinea, largely due to fear and superstition.

In the wild, crocodile monitors feed on small, fast-moving prey, such as birds, bats, and rodents. When running, most monitor lizards experience a phenomenon known as “Carrier’s constraint,” in which their lungs are compressed by their gait, forcing them to breathe through only one at a time.

Still, crocodile monitors have evolved an adaptation that prevents this from happening, making them highly efficient endurance runners.

The Nile monitor is Africa’s largest lizard, growing up to 7ft 3in (2m) in length and weighing up to 44lb (20kg). Nile monitors are large, powerful, and dangerous lizards with voracious appetites known to eat just about anything they can.

They can hunt on land and in water and are excellent swimmers, capable of holding their breath underwater for up to an hour.

In the wild, Nile monitors face several predators, including crocodiles, leopards, and lions. Yet, they are known for rarely backing down from a fight.

They are sometimes kept as pets by reptile enthusiasts, despite their notoriously aggressive nature and resistance to taming.

While there are no confirmed cases of Nile monitors killing someone, in 2002, Ronald Huff, a Nile monitor owner from Delaware, was found dead in his apartment, being eaten by his pet lizards.

It is unknown whether he was killed by the Nile monitors or whether he died, and they began eating his corpse afterward.

However, he had allegedly been bitten by them in the past and was found slumped against the door to his apartment.

Nile monitors can deliver serious injuries when provoked, and their bites are slightly venomous and easily result in infection.

Related: How dangerous are Komodo dragons?

Komodo dragons have around 60 very sharp, 1-inch-long, serrated teeth covered in the gum tissue, which tears when feeding. This means their mouths are often bloody (attractive!).

Their skin is incredibly tough because their scales contain tiny bones, known as osteoderms, which act like chain mail.

They have 2-inch long claws, which younger dragons use to climb trees until they are too large to do so, after which they use their claws for eviscerating prey.

Even the Komodo dragon’s saliva is dangerous. It contains a selection of venom-like proteins, which prevent blood from clotting and cause hypothermia, low blood pressure, and muscle paralysis.

Komodo dragons eat anything, up to and including water buffalo, horses, other Komodo dragons, and occasionally, humans.

According to authorities of Komodo National Park on Komodo island, Komodo dragons have attacked roughly 30 people since 1974, 5 of whom died as a result.

So from the small-but-mighty Gila monster to the kangaroo-killing perentie, to the fearless-and-feisty Nile monitor and the champion-athlete crocodile monitor, there are certainly some dangerous lizards out there.

But none are as formidable as the Komodo dragon. Its massive size, deadly jaws, chain-mail hide, and lethal claws make it easily the most dangerous lizard on the planet.

But all share one thing in common: us. All 5 of these species are threatened by human behavior, be it habitat destruction, poaching, or illegal trapping for the pet trade.

As powerful as these creatures may be, none matches human selfishness. Without our protection, they may not be around much longer.

Thank you for reading. If you liked this article, here’s another recommended read on a similar topic: Most Dangerous Wolves.