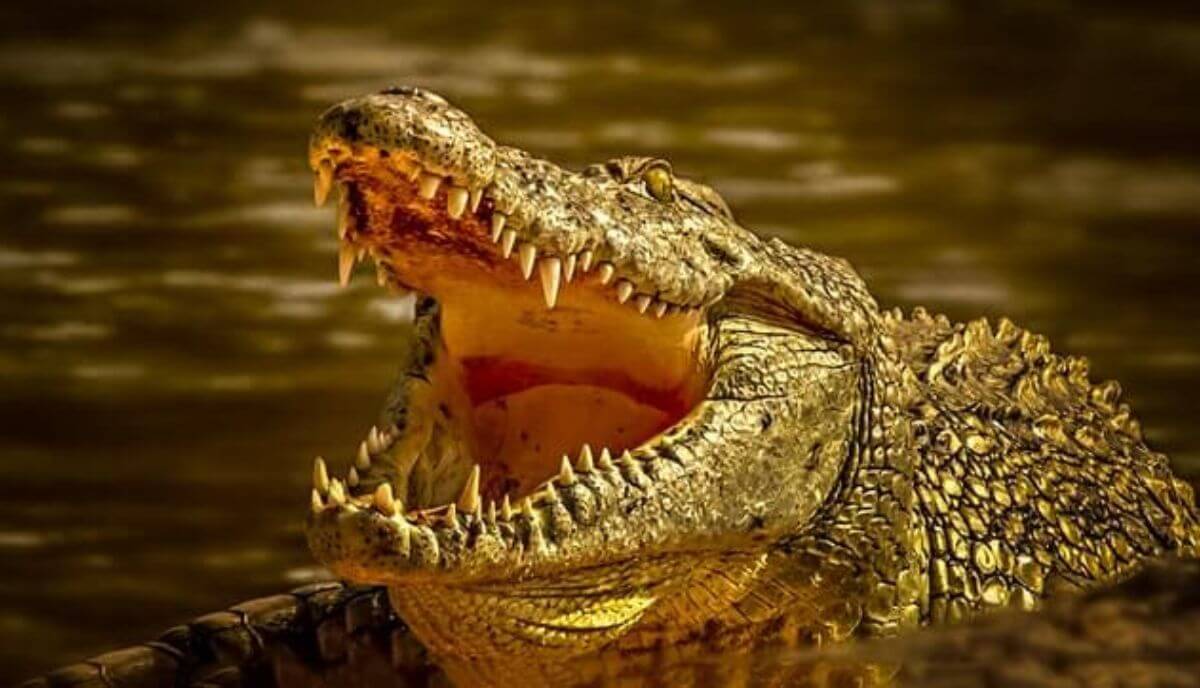 Crocodiles are giant carnivores reptiles regarded as one of the deadliest hunters on the planet. Their attack skills, bite force, and size puts them in a place of being apex predators in every habitat they live in.

Even though all crocodiles are skilled predators, but they are not equally aggressive and dangerous. Some species are more ferocious and will attack without any restraint.

Topping the list of the most dangerous crocodiles in the world is the Nile crocodile, with a 3,700 PSI bite force. It is known for its countless attacks on humans, many of which resulted in deaths.

Let’s look at some other deadly reptiles and what makes them stand out.

Most Dangerous Crocodiles in The World

In descending order, the deadliest crocodiles in the world are:

The Nile crocodile lives mostly in sub-Saharan Africa, where it inhabits rivers and swamps. It is considered the most dangerous African reptile.

According to statistics, Nile crocodiles are the deadliest and most dangerous crocodiles in the world, being responsible for up to 745 attacks on humans yearly, of which 63% result in a fatal outcome.

These aquatic monsters can grow up to 20 ft. and 1,700 pounds in weight, making them the second largest crocodile.

The most significant strength of Nile crocodiles is their 3,700 PSI bite force, earning their spots as the second strongest sea animal by bite force (after the great white shark). Coupled with their sharp teeth (64 to 68), killing prey is an easy task.

In addition, these crocs are fast swimmers who can travel 35 kilometers per hour in short bursts.

Their meals consist mainly of amphibians, fish, and medium to large land mammals. A Nile crocodile’s preferred hunting technique is based on ambushing (when hunting land animals). Sometimes they wait hours or even days for the target to get close enough.

Once they capture an animal, Nile crocodiles pull it back to the water to drown it before swallowing it. Their dark olive to brown skins helps these powerful crocodiles camouflage while hiding. They may even appear as a log of wood.

Nile crocodiles can eat up to half their body weight at a time. Even with their immense appetite, these crocs can stay months without food. Being territorial beings, the male will fight another male if he attempts to mate a female crocodile in his kingdom.

The saltwater crocodile is the largest living reptile in the world and the second most dangerous crocodile species on the planet. They reside in estuarine environments such as mangrove swamps and tidal reaches of rivers. Still, they are also known to inhabit brackish water and freshwater habitats.

Saltwater crocodiles are responsible for 30 attacks on people per year, of which 30% end up being fatal.

Large male individuals can grow up to 20 ft. and 2,900 pounds, while females grow to about 10 ft. These giants lurk in the water, waiting for their prey to come into range before blasting into the attack.

Saltwater crocodiles hunt various animals, including sharks, amphibians, birds, and humans. If it’s a smaller prey like birds, they swallow them whole but will tear bigger game with their 66 sharp teeth before consuming them.

Together with Nile crocodiles, Saltwater crocodiles have a bite force of 3,700 PSI, powerful enough to crush a bowling ball into pieces. In addition, these croc species swim as fast as 29 kilometers per hour in short bursts.

Besides their sheer strength, saltwater crocodiles also possess a long tail for defense (if anyone takes the risk to attack them).

When they’re not hunting for food, these reptiles fight over territories. Males have large domains but rarely allow other males to live with them, especially during the breeding season.

You can find American crocodiles along the Atlantic and Pacific coasts, running from Central America to the Caribbean and South American islands. They will, however, more frequently inhabit saltwater marshes in Southern and Central America and on lowlands in Florida.

American crocodiles are among the largest-sized crocodile species. On average, they range in length from 11ft. to 15ft. and weigh up to 1,000 pounds.

However, adult males can grow up to as long as 20ft. and weigh as much as 2,000 pounds. Adult females are generally smaller than males.

These crocodiles have mighty jaws and sharp, jagged, interlocking teeth, which they use to hold onto prey before swallowing them whole. They also have adept night vision and protective eyelids that help them see underwater when hunting.

All in all, they are some of nature’s finest predators and, at the same time, one of the deadliest crocodile species. You should be extremely careful if you happen to find yourself near this beast.

Mugger crocodiles, also known as a marsh or Indus crocodiles, live in the Indian subcontinent and other countries (Pakistan, Southern Iran, India, Nepal, and Sri Lanka). They are prominent for their broad snouts and live in rivers, marshes, and freshwater lakes.

Large individuals can grow 16ft. in length, weighing up to 1,540 pounds.

The muggers’ diet varies with age. Juvenile crocs typically feed on crustaceans, fishes, and frogs, while adult ones prey on larger animals like deers and buffalos.

Muggers have a good sense of smell, powerful swimming ability, and excellent eyesight, which they capitalize on for hunting down prey.

Furthermore, muggers are extremely dangerous crocodiles and are known for having the ability to rip a man into pieces. They have an incredible bite force of 2,500 PSI.

Moreover, their adult males tend to be very aggressive and territorial, especially during mating seasons.

While all fatality cases resulting from mugger attacks may not be entirely accounted for, these reptiles have attacked and killed many humans.

According to CrocBite, muggers attacked 110 persons between 2008 and 2013, with more than 30 percent of these attacks resulting in death.

The black caiman is the largest Amazon Basin animal and, at the same time, one of the most dangerous crocodiles in that part of the world.

They reside in the northern and central parts of South America (which cuts across countries like Bolivia, Ecuador, Guyana, Colombia, French Guiana, and Peru).

Adult male black caimans can grow as long as 20 ft. which makes them the third largest crocodile species in the Neotropical realm.

On the other hand, females are generally smaller than males, growing to about 10 ft. On average, these crocs weigh about 800 pounds but can weigh as much as 1,300 pounds.

Black caimans have a broad diet, and their enormous strength allows them to prey on large animals like horses, pythons, monkeys, deers, bears, otters, armadillos, etc.

They are nocturnal hunters with good vision, very sharp hearing, and dark armored skin that serves as camouflage.

Black caimans are mighty animals, but no one has ever measured their bite force. Despite being deadly crocodilians with immense physical strenght, black caimans do not eat humans and usually only attack by mistake or in self-defense.

Between 2008 and 2013, there were 43 attacks on people by black caimans, and only about one-fifth ended with fatal consequences.

The American alligator is a species of crocodiles native to North America. They are widely distributed from the tidal regions of North Carolina to as far south as the counties in Florida and far west to central Texas.

You can also spot these predators in Georgia, Mississippi, Louisiana, Alabama, Arkansas, etc. They are typically freshwater inhabitants and have low salt tolerance.

American alligators are large. Adult males range in length from 11ft. to 15ft. and can weigh as much as 1,230 pounds. Adult females are generally smaller than males and range from 8.5 to 9.8 ft.

They are apex predators, sitting at the very top of the food chain. American alligators typically feed on a wide variety of animals like snakes, fishes, birds, turtles, invertebrates, muskrats, and raccoons.

However, they also prey on larger mammals like deers and wild boars when fish and smaller alternatives are not available but are generally less aggressive to humans.

However, about 376 injuries and 15 human deaths have been reported in the United States by attacks from American alligators in the period from 1948 to 2004.

If you want to learn more about these reptiles, you can read the article about how dangerous alligators are to humans?

The gharial, also known as the Indian gavial, Indian gharial, long-nosed crocodile, or fish-eating crocodile, resides in India and Nepal. They inhabit calm, deep, quick-moving rivers and are generally better built for water than land.

Gharials are another massive crocodile species. Adult male gharials range in length from as long as 16 ft. to 20ft. Their adult females are generally smaller and typically grow to about 13ft. Regarding their weights, gharials vary in weight from 350 to 400 pounds.

However, adult gharials are more fish eaters. Their teeth, snouts, and thin jaws are well suited for quick lateral underwater snatching motions and grasping onto agitating prey like slippery fishes.

However, gharials are, in general, not a threat to humans. Firstly, they are not agile movers, as they are the most aquatic crocodile species. Secondly, although gharials are protective parents, they are a shy species and usually hide from humans.

Notwithstanding, gharials have a lethal bite force and may use this powerful weapon to attack humans if they feel threatened or under attack.

So, despite their timid personalities, you do not want to mess with such a powerful creature.

As its name suggests, the Cuban crocodile is a species endemic to Cuba. It is found in freshwater habitats such as lakes, rivers, and swamps. The male Cuban crocodile grows typically up to 11 ft. and 474 pounds. In contrast, the female is slightly smaller than the male.

They’re fast swimmers moving up to 32 kilometers per hour in water. Their long, strong limbs with reduced webbing give them agility on land.

Like all other species, Cuban crocodiles are carnivores and feed on various animals. Still, their number one source of nutrition comes from fish.

Even though they are medium-sized, Cuban crocodiles are very aggressive and potentially dangerous to people.

However, despite their ferocious personalities, throughout history, only one attack by Cuban crocodiles resulted in human death – an older adult was killed in 1995 while spearfishing.

These crocs do not go for large prey even with their numerous teeth (64 to 68). Cuban crocodiles have blunt teeth that help them crush turtle shells.

Unfortunately, Cuban crocodiles are critically endangered, with only about 2,000 left in the wild. It has been hunted for its hide and meat, which are used for luxury goods and folk medicines.

And there you have it, with this, we conclude our article on the most dangerous crocodiles on the planet.

Crocodiles are fearful-looking creatures known for attacking and hunting down anything that moves. Be careful in the wild, as these creatures can appear as wood.

According to Wikipedia, about 1,000 people per year get killed by crocodilians worldwide. However, Nile crocodiles are the most dangerous species to humans, as they are responsible for the most attacks on human beings, of which a high percentage end up in worst-case scenarios.

Thank you for reading. If you liked this article, here’s a recommended post on a similar topic:  Most Dangerous Big Cats In The World.