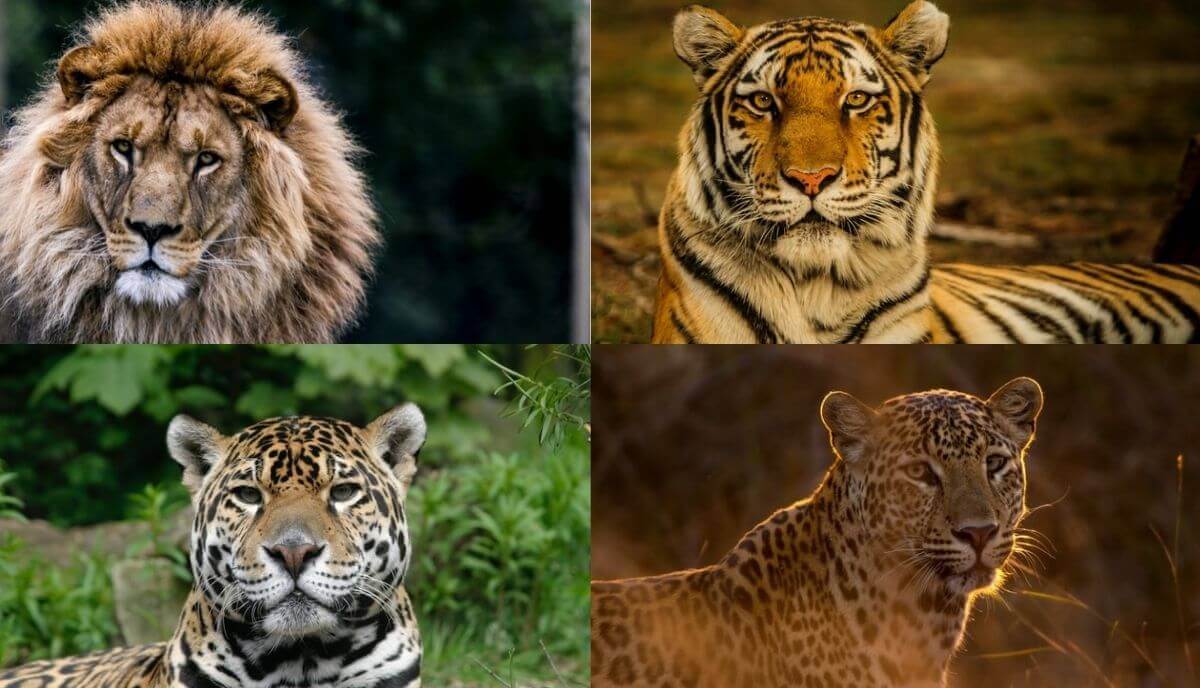 Though cute and fluffy like their little domestic cousins, big cats are deadly. These wild felines are some of the most efficient predators in the world.

That said, which is the most dangerous big cat species on the planet?

While all big cats can be aggressive to humans, tigers are statistically the deadliest and most dangerous big cats on the planet. They are responsible for 373,000 human deaths between 1800 and 2009 year. Bengal tigers, in particular, are considered the most dangerous tigers species.

If you are curious about which big cat species are most dangerous to human beings – be sure to read on.

5 Most Dangerous Big Cats in the World 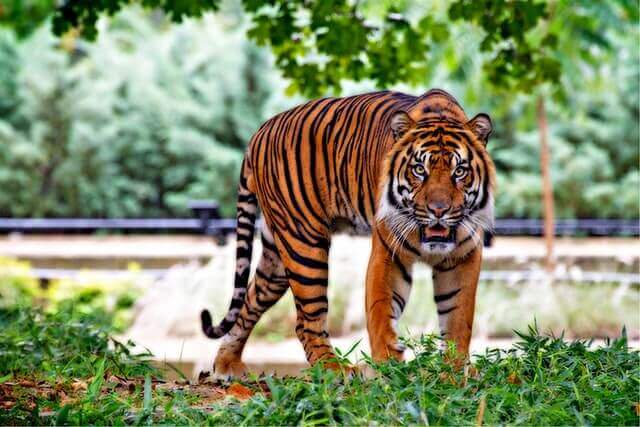 Records show that this big cat species devours more human lives than any other big cat, making them number one on this list of the deadliest big cats.

Additionally, tigers are responsible for more human kills through direct attacks than any other big cat, averaging 1,800 per year between 1800 and 2009.

Throughout the 1900s, one Bengal tigress reportedly killed 436 individuals in India. In 2008, Bengal tigers lost their habitat to Cyclone Sidr, increasing tiger attack prevalence in the Sundarbans, India (source).

Furthermore, tigers attack during the day, another distinction between these felines and the lions and leopards.

These dangerous big cats are known for maintaining large territories to have a broader prey source. Speaking of their diet, tigers can go for a few weeks without any food. However, they can consume up to 88 lbs (40kg) of meat in one sitting.

By not having consistent predators other than humans, tigers rarely have to protect themselves from attacks. But, being predators, they are often engaged in hunts. When they tackle their enemies, they tend to knock them down and use their teeth to sink into their throats. 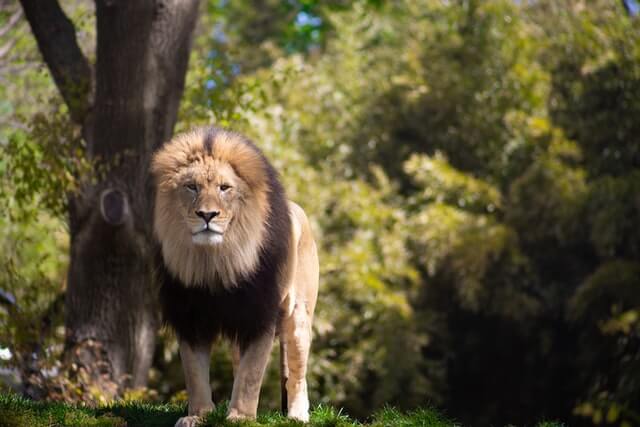 Statistics indicate that lions consistently enter human settlements at night and during the day to catch prey.

The most infamous case of lion attack was recorded in 1898 in British East Africa, currently Kenya, where two male lions devoured over 130 railroad workers.

Studies show that African lions eat humans to supplement their diet, not as a last option, making them the world’s second most dangerous big cat species.

When going after prey, lions utilize ambush techniques. They try to get as close as possible to their target before pouncing.

More often than not, lions target the weakest and most vulnerable individuals. Though not as stealthy as the jaguar or as fast as the cheetah, lions have developed an effective hunting tactic.

These big felines defend themselves using their sharp claws and teeth. Also, unlike other big cats, lions have additional behavioral adaptation – they live in groups called pride, which means extra protection.

Lions have no natural predators because of their large size and enormous strength. They usually intimidate smaller wild cats such as cheetahs and leopards by stealing their kill and sometimes preying on their cubs. 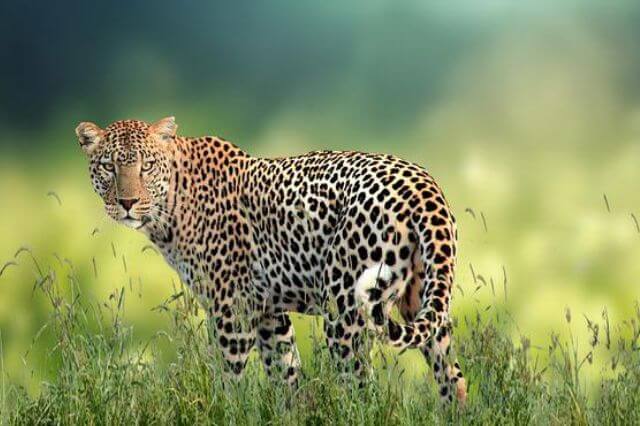 The leopard is a dangerous big cat species known for attacking and hunting humans. Though they avoid territorial aggression, they don’t back out from a challenge under invasion.

Leopards usually drag their kill into trees where they can eat unbothered by more terrestrial threats. They might not be as massive as lions or tigers, but these felines have robust bodies and immense strength that can drag carcasses weighing over a hundred pounds up a tree.

In addition, with a success rate of almost 40% are the number one hunters of all big felines. As a result of all the above, pound for pound, leopards are considered the strongest big cat species on the planet.

In general, leopards primarily feed on gazelles and impala. They occasionally prey on smaller unexpected creatures like birds, mice, and fish.

Though they are fast and can sprint at nearly 40 miles per hour, these deadly cats mostly use their camouflaged fur to get close to their prey before killing them with a single bite on their mighty jaws.

Regardless of tigers being the most prevalent big cat species, leopards are the most difficult to spot. 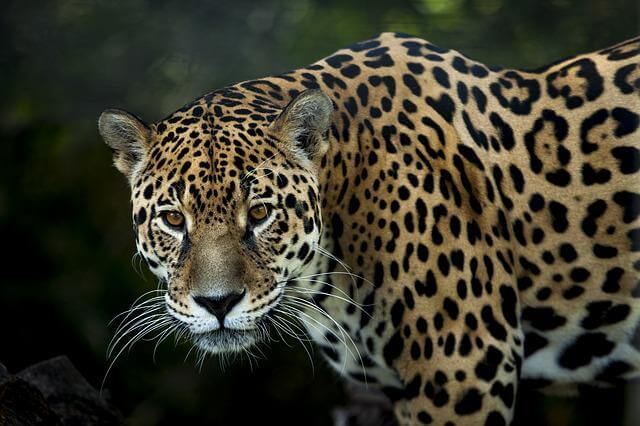 Some people argue that the jaguar might be the deadliest big cat species because of its powerful jaws. With a bite force of over 1,500 pounds per square inch (PSI), jaguars have the strongest jaw muscles of all big cats (more than double that of a lion!).

The jaguar’s bite is notably strong because of the arrangement of its jaw muscles, which is the primary way to kill its prey, unlike tigers that try to overpower the target before going for the neck.

Moreover, its jaws are slightly shorter, enhancing its biting leverage.

A jaguar’s sharp teeth penetrate the prey’s skull, and no other feline can penetrate through the animal’s head as effectively as the jaguar.

Luckily, jaguars rarely attack humans, but when they do, it is often fatal.

However, gun to the head, you’d rather be attacked by a jaguar than a tiger or lion. A jaguar is no match for its more prominent and fierce feline counterparts. 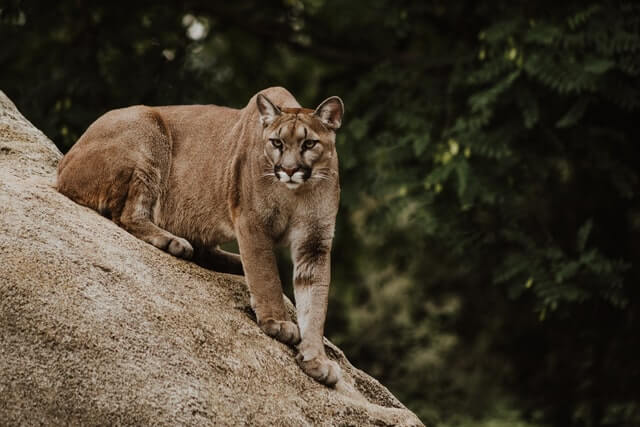 Pumas, also known as cougars, and mountain lions, hold the fifth position on this list of most dangerous big cats. Altohgout rarely, pumas may attack humans.

The most common reason for the attack is when the animal is starving (even though they would rather attack livestock than people). Other reasons are the loss of territories and self-defense.

Using the ambush technique, pumas get as close as possible to their prey before jumping on their back. They then quickly use their strong neck and jaw muscles to bite into the prey’s neck.

A cougar’s flexible spine also helps this feline to effectively carry out an attack.

What’s more, pumas have large eyes with many light-sensitive cells that enable them to have excellent night vision. They can thus see their prey way before the prey sees them.

In addition to incredible vision, the puma’s ears are developed to hear sounds other mammals can’t. This helps them precisely locate their prey.

The great hearing also makes a suitable defense mechanism as they can sense danger from miles away.

The puma’s large soft paws are another suitable adaptation that enhances its hunting. The feet enable the feline to tiptoe so prey won’t hear and run away. Lastly, the long tail also helps it change direction quickly while chasing the target.

In summary, each feline from the list is pretty dangerous; however, tigers win the number 1 spot as the deadliest and most feared big cat. It was a stiff competition between the tiger and the lion, but frankly, the latter isn’t as fatal as the former because they are ‘lazy’ and need to live in a pack to survive predation, no matter how scary their roars sound.

Tigers not only record the most human kills among all the wild cats, but they also possess the highest level of physical strength.

Nonetheless, the lion, leopard, jaguar, and puma are equally as dangerous, each portraying unique qualities that make them fierce and fearless.

So, there you have it! If you’ve ever asked ‘what are the most dangerous big cats,’ you finally have your answer, five of whom are exact.

You can now be on the lookout for your next wildlife tour or nature exploration.

Thank you for reading. If you liked this post, here’s a recommendation for another popular big cat topic: Do Big Cats Meow?