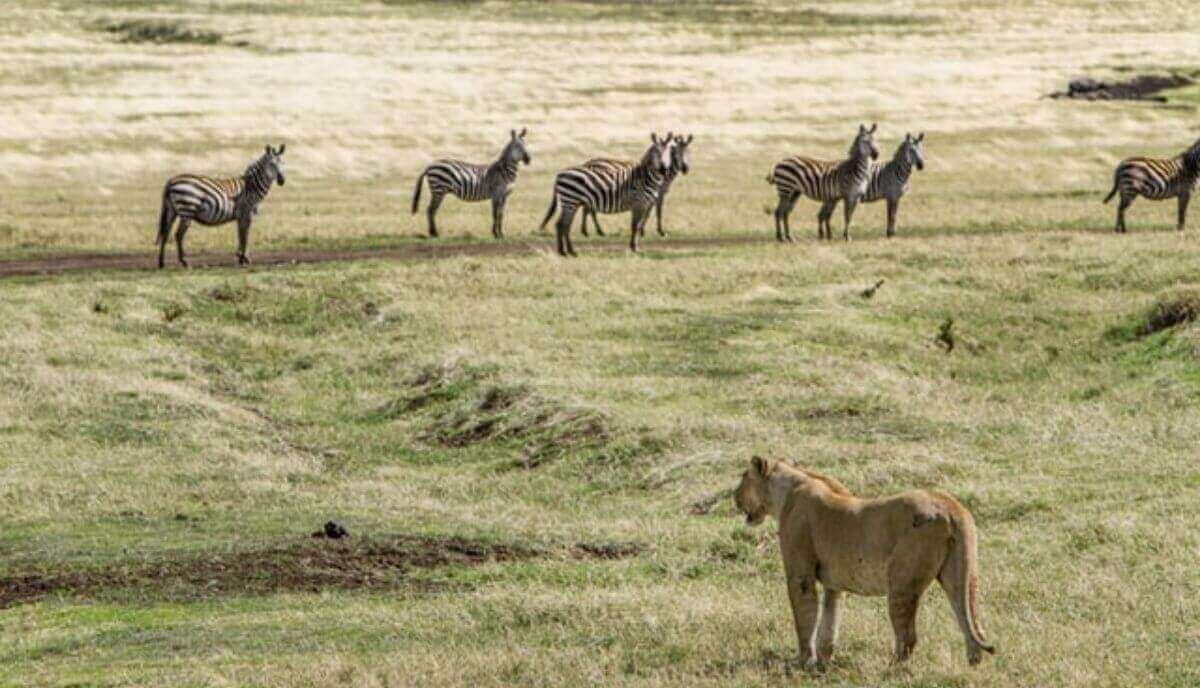 In biology, the prey is known to be an organism that gets hunted and eaten by another organism. Examples of prey animals include zebras, rabbits, goats, deer, and many others.

On the other hand, the term predator refers to organisms that feed on those same prey. There are as many predators as prey, and they are found in almost every corner of the planet.

Thanks to mother nature, predators and prey are doing a great job of maintaining the food chain balanced. Yet, wilderness can often be brutal, and it includes the suffering of many prey animals.

However, life in the wild is indifferent to suffering, and there seems to be no limit to that suffering.

For there to be life, there must be suffering, pain, and death.

Today, we are going to talk about prey animals. Animals that face suffering and risk of being slaughtered at any waking hour of a given day.

Depending on the environment they live in, white-tailed deer are preyed upon by many different animals.

Back in the time, wolves, bobcats, and coyotes used to be the main deer predators, but today, humans are their number one executioner.

Aside from their well-developed sense of smell, the primary way of protection which deer practice is running away from their potential threats.

However, despite having many natural enemies, a white-tail deer population is stable.

Due to many predators in the wild, zebras have to stay constantly on alert. Zebras are one of the most common prey animals of Africa.

Lions, leopards, cheetahs, hyenas, and crocodiles are animals that most usually feed on zebras. Besides, humans are also responsible for the declining zebra population due to frequent hunting.

Zebras primarily find protection in large groups. These animals congregate in herds of up to 1,000 members.

Besides that, zebras use their colorful bodies to camouflage and prevent any potential attacks.

Out of three zebra species, Grevy zebras are the only endangered species, with a population of only 2,800 individuals.

Domesticated rabbits are also often eaten by cats and dogs.

Even though rabbits have no defensive skills whatsoever, they have many natural abilities to evade predators. In addition to their adept senses of sight, smell, and hearing, rabbits blend in with their surroundings, masking their location.

However, the chief defense is their running talent. Rabbits can reach speeds of up to 45 mph (72 kph).

Due to their size, wildebeests are prey only for the very best hunters in the wild. The major predators that kill wildebeests are lions, wild dogs, cheetahs, hyenas, and crocodiles.

These large antelopes find safety in numbers. They are known to be highly protective and social animals that live in herds.

When under attack, wildebeests would produce loud sounds and stomp on the ground with their feet to scare off potential predators.

Besides their natural enemies, wildebeests are regularly hunted by people. Thankfully the population of these majestic creatures is stable.

Even though their architecture skills and aquatic lifestyle offer great protection from predators, beavers are still vulnerable to different wildlife.

Coyotes, otters, owls, and foxes are the main beaver predators. Besides them, eagles, mountain lions, black bears, and hawks would also kill these prey animals given the opportunity.

The first line of protection beavers rely on is their dens. However, when attacked on the ground, beavers would flee in the water to escape their enemies.

In case they are cornered, beavers would try to defend themselves against predators by scratching and biting. A beaver would try to injure its enemy with its teeth and sharp claws, creating for himself an opportunity to escape.

When raising a goat, the main concern most farmers have is how to protect their livestock from predators? This concern is legit since goats are often eaten by carnivorous animals.

While goats predators vary depending on the geolocation, the most common goat enemies are canine species, such as coyotes, wolves, and foxes.

Other animals that occasionally feed on goats are bears and eagles.

Most of the time, goats would run away from any potential danger; however, if trapped, they would use their horns to attack in order to defend themselves.

In case you keep domesticated goats, the best approach to protect your livestock is to get a guarding dog.

Swans are animals that live on land and water, but they are most vulnerable to predators while on the ground. Apart from humans, raccoons, foxes, and wolves are their top predators.

These large aquatic birds prefer to nest above the ground on already existing structures in order to stay alert from predators.

Even though swans lack any attacking protections, these waterfowl will hiss, snort, and flap their wings to drive off a potential enemy. This display is basically a bluff, as it is very little to no force behind that action.

Still, in case their defending mechanism works out, they make a triumphant sound to brag out.

As well as being the main predators of most prey animals in Africa, lions, hyenas, leopards, cheetahs are also common impala hunters. Although, young impalas often lose their lives to eagles, jackals, and caracals.

The impala also uses zig-zag running and jumping to make it even more difficult for its predators to catch it.

Although, herd surveillance of its surrounding is also a crucial way of protection.

Young capybaras have to worry about many meat-eaters in the wild. Ocelots, foxes, eagles, and caymans are their regular hunters. While adult capybaras often fall victim to pumas and jaguars.

Even though capybaras are twice as big as the second-largest rodents, they are quite helpless when attacked. When threatened, they will dive into the water and try to hide from the danger.

As a result, these giant rodents would spend most of their time in or near the water. Hidden from the predators.

Buffalos are legendary herbivores that belong to one of the “big five” members of African animals. Because of their size, adult buffalos face very few natural predators.

Lions and spotted hyenas are the main carnivores that hunt buffalos. But even these proficient killers will only attack a buffalo with the help of their family members.

Adult buffalos weigh over half a ton, and they can be quite dangerous pieces of meat. Besides their sheer strength, buffalos utilize their powerful horns to defend themselves against predators.

Apart from that, buffalos are social animals, and in case one of their herd members is in danger, other individuals would act aggressively towards their enemies.

Tigers, leopards, coyotes, and wolves are among the most common predators of a grown wild boar. However, juveniles are often preyed upon by owls and eagles.

Apart from their natural predators, wild boars are often hunted by people, as their meat is one the healthiest and tastiest game meat.

In order to evade predators, wild boars rely on their sense of smell. They will also utilize their speed abilities to flee away from any potential danger.

Wild boars are proficient swimmers as well, which is often used as another method of protection.

Mice are prey animals that are on the menu of many predators. Skunks, snakes, dogs, and birds of prey will gladly snatch a mouse given the opportunity.

However, the most common predators mice face are birds of prey. Especially barn owls.

Due to the often predation on them, the average lifespan of a mouse in the wild is around one year.

In case they face predators of similar size, mice use their teeth to defend themselves. Yet, most of their natural enemies are much larger than them, so their weapons are not as useful.

Other than that, mice would try to avoid predators by making a burrow underground.

Like goats, sheep have numerous natural predators. The most common predators include bears, bobcats, dogs, wolves, eagles, foxes, and coyotes.

According to Wikipedia, coyotes are responsible for 60.5% of all sheep deaths in North America. Followed by domestic dogs at 13.3%.

By being prey animals, their natural instinct is to run away when chased by predators. Besides that, sheep have no defending abilities whatsoever.

There have been cases when sheep died out of panic without being previously injured by attackers.

If you happen to keep sheep, the best way to protect your livestock is to get a guardian dog or to set up good fencing.

Despite their size, cows are often preyed on by several carnivore animals. The biggest cow predators are wolves, grizzly bears, coyotes, cougars, and bobcats.

According to researches, in 2015, wolves have been responsible for 3,879 cow deaths in the U.S., making themselves the number one cow predator.

The first line of defense cows utilize is cooperation. Living in herds would often be helpful to get rid of their attackers.

Yet, if cornered, cows will also use their horns as weapons of protection.

Notwithstanding being often targeted by different predators, the cattle population is on the rise.

Iguanas are usually on a diet list of birds of prey. Owls, hawks, and eagles are the main predators for both young and adult iguanas.

Apart from birds of prey, raccoons, snakes, and wild cats will also eat iguanas given the opportunity.

The first method of protecting themselves against predators is fleeing. Even though iguanas seem slow and lazy, they can move quite fast.

Depending on their attacker, iguanas hide, climb trees, or go in the water.

However, when escaping is not an option, iguanas use their tails as whips to fight back any potential enemies. They will also utilize their sharp claws and teeth as a way of protection.

If you think that humans are the only ones that enjoy chicken meat, you are wrong. Chickens are one of the most vulnerable poultry.

The only defensive weapons chickens possess are their claws. Which is often not powerful enough to protect them from being eaten.

Poultry keepers most commonly protect their flock by installing fences around their territory.