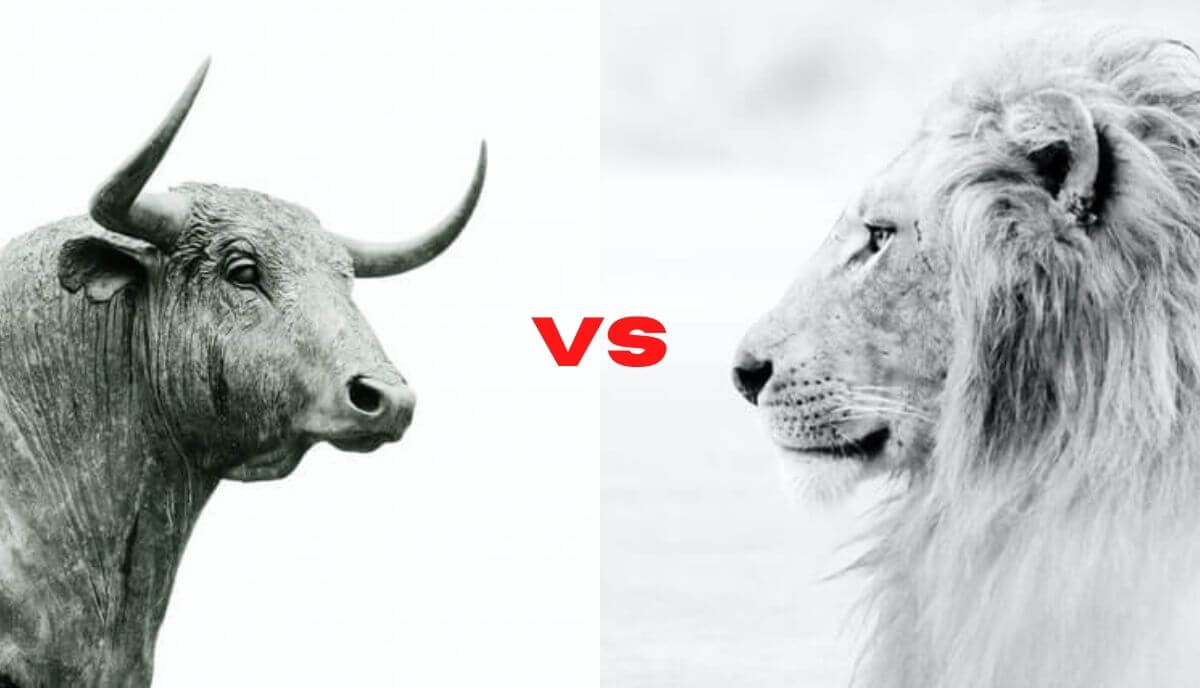 Bulls have a bad reputation in their name. They are always seen as these large, aggressive, and vicious animals. However, bulls’ strengths are misunderstood as equating danger.

Another misunderstood strong animal is lions. These apex predators have been consistently known as the King of the Jungle.

Reading about bulls and lions side-by-side, I wonder whether the King of the Jungle can live up to its name when faced with a raging bull.

As many of us will ask – who would win in a fight between a lion vs a bull?

Assuming it is a one-on-one duel, a lion will most likely come out as the winner. However, both can defeat each other depending on any present circumstance. Although a bull can overpower a lion with its sheer strength, lions are smart and skilled predators. Neither is a guaranteed victor, but we give a lion a small advantage against a bull in a potential fight.

It’s hard to know who would win in a fight between a lion and bull. So many factors come into play, like size, age, fight terrain, and others.

We’ll try to compare the two contenders in the most important categories.

Lions are massive wild cats, weighing between 286 to 418 pounds. They can also grow up to seven feet.

Bulls, on the other hand, weigh around 1,100 to 2,200 pounds. Their weight may also depend on their breed. As to their top line length, bulls can reach up to 10 feet.

Based on these facts, it is evident that bulls outweigh and outgrow lions. They have bigger and larger builds than every wild cat.

Although bulls are almost the same height as cows, they are far heavier. Thanks to its bone and muscle mass. The increase in their body mass was due to centuries of selective farming.

As for lions, although they are shorter and lighter than the bull, they have a muscular build. Interestingly, their muscles are not affected even if lions spend between 15 to 18 hours a day resting.

Lions spend so much time sleeping due to exhaustion from hunting. They spent a lot of time running and stalking their prey. So, it is understandable the time consumed in resting.

A 2010 study published by Springer discussed how size affects the fighting behavior and winning results between animals. The study suggests that even though the size is a factor, what is important is the animal’s fighting experiences.

Lions have been predisposed to be strong. They are carnivores that hunt prey for a living. If lions are not sufficiently competent to hunt for their meal, they will surely starve.

As for bulls, they are also strong due to their large muscle mass. Depending on their breed, their strength varies from one another. For example, Spanish Fighting Bulls are specially bred for bullfighting.

People prefer to raise Spanish Fighting Bulls because of their aggression, stamina, and strength. To maintain its aggressiveness, people rarely interact with such bulls.

When compared to other bulls, Spanish Fighting Bulls have longer horns. It also follows that they have stronger neck and shoulder muscles. These traits can be attributed to the way they attack.

Bull attacks in an upward motion. That’s why most bull injuries caused to humans are found in the thigh and groin areas of the body. (source)

Lions’ strength comes with speed and explosiveness. Lions can jump high, over three times higher than humans. They also have an average speed of 50 mph.

As for their physical strength, a lion’s punch is equivalent to a 400 pounds-force. It is strong enough to cripple a person with one strike.

Lions are very intelligent big cats. In fact, they are considered the smartest members of the feline family. They can communicate with other individuals in the pack by vocalization, facial expressions, rubbing, and licking.

Bulls also have the social intelligence to communicate with each other. They use their bellows and non-verbal body signals. The volume and tone of their moos and bellows indicate the message they are sending.

In terms of teamwork, lions proved their capability as a pack. They have a structure to follow that provides their responsibilities. It is an effective way to ensure that they have a meal to eat and security to rely on.

Like other cattle, bulls move in a herd with the cows. However, most domesticated bulls are isolated from the group. These aggressive animals are merely treasured for their reproductive capabilities.

In hunting, lions’ main tactic is to be sneaky. They do not immediately pounce on their prey, afraid of scaring them away. However, if the lion assists the lionesses in hunting, they can immediately corner the strongest and healthiest prey.

Due to being herbivores, bulls do not have a problem with hunting prey. However, they have sudden moods of aggression. Dairy bulls have been reported to use horns on others, causing injuries.

Mostly lions do the attacking, being the apex predator. They use their strength and skill to ensure a kill.

On the other hand, bulls use their brute strength to injure anyone within their range during their aggressive mood.

When attacking their prey, lionesses prefer to stalk the weakest or youngest prey. The hunting pack wants to have a sure hunt as a meal. However, a lion will immediately go for the healthiest herbivore around. The lionesses will corner the prey for the lion to do the majority of the attack.

Bulls have a sudden mood of aggression. Though, hand-reared bulls tend to be more aggressive than ordinary bulls. It was theorized that lack of socialization is the cause of increased aggressiveness.

As to how they attack, bulls use their horns in an upward motion to cause injuries. In a bullfighting match, they can run towards the moving flag at an average speed of 35 mph.

In defending themselves, lions mark their territorial boundaries using their urine. They will chase away any intruder in their territory. Lions are fierce when it comes to their space.

As for bulls, the way they defend themselves is similar to how they attack. Bulls lower their heads and charge toward their attacker.

Summary – Lion vs Bull: Who Wins?

Although physically weaker than a bull, a lion is faster, more skilled, and smarter than a bull. As long as it avoids the bull’s aggressive upward attack, a lion can use its agility to take the bull down. Being apex predators, lions are also cunning and stalkerish. So they are aware of how, when, and how to hunt the prey. At the end of the day, for lions, a bull is considered prey.

If you like this type of post, here’s another recommendation of a popular read: Elephant vs Bear