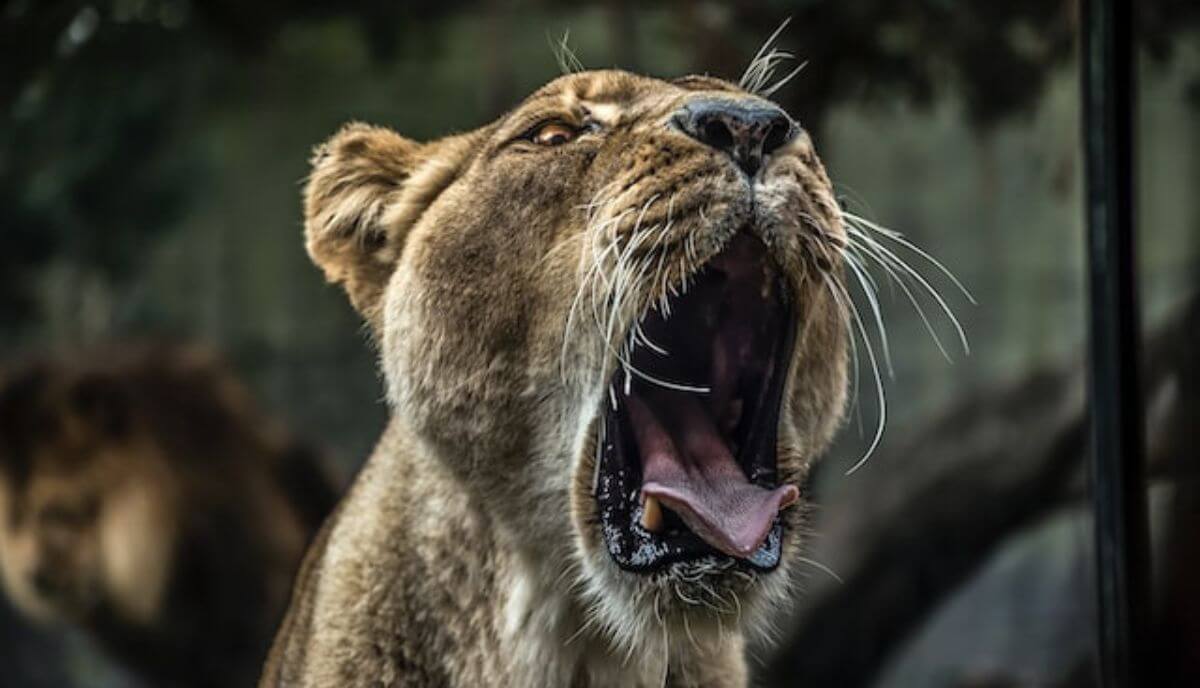 When considering what makes lions such formidable creatures, the traits that come to mind are:

It is not likely that you would consider lion tongues particularly impressive until you find out that a lion’s tongue can strip flesh from bone in just a few licks.

Let’s discover more about what makes a lion’s tongue so fitting for such an impressive animal.

Like other members of the Felidae (cat) family, a lion’s tongue is covered in tiny, backward-facing spikes known as papillae. Owners of domestic cats will know how rough their tongues are compared to those of, say, dogs or humans.

Imagine this scaled up around fifty times, and you have an idea of just how rough a lion’s tongue is. However, the structure of a lion’s tongue is not actually that different from our own; the tongue is made of muscle covered in skin and papillae.

Like most felids (cats), lions use their tongues in a range of different activities, including grooming, drinking, and feeding, and their tongues are perfectly adapted for these purposes.

As we’ve already mentioned, the spikes on a lion’s tongue are called papillae. They are the same structures that exist on most mammal tongues.

What makes lion papillae unique is their structure: they are hard, pointed, hooked, and curved back into the mouth rather than round and soft, like those of most mammals.

Papillae are hollow and made of keratin. Keratin is a fibrous, protein-based compound and is found in claws, nails, and hair. This is what makes lion papillae hard.

The papillae are attached to the tongue’s soft, flexible skin, allowing them to bend and change direction. This not only makes them more efficient at combing or raking through fur or flesh but also helps prevent injury.

The shape and flexibility of the lion’s papillae make them extremely good at removing knots and tangles in the animal’s fur without snagging or tugging.

Why Do Lions Have a Rough Tongue?

When a lion licks a surface, the sharp papillae scrape against it, causing friction. This is magnified by the fact that they face backward, like hundreds of tiny hooks. This enables the lion to use its tongue to do things a human cannot.

For example, when a lion grooms itself or another lion, the papillae act like combs, raking through the fur and removing dirt, dead skin, loose fur, and other debris.

This is one reason domestic cats are typically better at cleaning themselves than dogs and do not need to be bathed unless they encounter something truly revolting.

Lions’ rough tongues also help to remove odor, making it harder for their prey to detect them. Cleaning their fur helps lions cool off and keep from overheating under the intense African sun.

Have you ever wondered why lions lick their prey?

Well, lions can also use their tongues to strip fur or feathers from their prey by repeatedly licking to loosen the follicles and sometimes tugging on the tough spots with their teeth.

They do this because fur and feathers are difficult to digest and have no nutritional value (and, one would imagine, taste horrible). Licking their prey also helps tenderize the meat: the papillae shred it, and the lion’s saliva breaks it down before it even takes a bite.

A lion’s sharp teeth are efficient at tearing most of the flesh off their prey, but they are less good at removing flesh close to the bone. This is where the tongue comes in.

Lions lick the bones of their prey to remove every last morsel of meat, the papillae raking the meat up with every lick.

Lions often continue to lick bones even after the meat is gone. This is because their tongues are so rough that they begin to scrape away at the bone itself, providing a valuable source of calcium and other nutrients.

Finally, lions use their tongues to lap up water. The papillae provide a large surface area for the water to cling to and act like miniature cups that scoop up the water.

Read Also: Where Do Lions Sleep?

Which Big Cat Has The Roughest Tongue?

Because big cats all use their tongues for similar purposes, their tongues are very similar. The only difference is their size: a bigger cat means a bigger tongue, which means bigger spikes.

The larger the animal, the rougher its tongue. As such, tigers and lions, being the largest members of the Felidae family, have the roughest tongues.

Animal trainers who work closely with big cats and have been fortunate enough to have been licked by them (or unfortunate, considering how bad a lion’s breath is) generally report very little difference between lion and tiger tongues; both are equally uncomfortable.

Can Lion’s Tongue Rip Your Skin?

Yes, a lion’s tongue can rip your skin. If a lion were to lick your arm the same way it does its food, it would not take very long before your skin is broken and worse.

However, on the rare occasions in which humans have been licked by lions and lived to tell the tale, the lions were mostly being affectionate.

Lions groom one another in the wild as a way of showing care. Mother lions groom their cubs while they are too young to do it themselves. Adult lions use this behavior to bond with each other. In captivity, lions may choose to do this with humans they have formed bonds with too.

Yet, when grooming, lions are far more gentle than they are when feeding so that they do not hurt one another. Of course, lions have much thicker skin than humans and are covered in dense, coarse fur, which we (or at least most of us) are not.

Even the gentlest attempts at grooming a human will result in skin irritation or injury if done for too long in the same spot, so it’s fortunate that (most) lion keepers have more than one limb to offer them.

As if incredible strength and agility, deadly jaws, and razor-sharp claws weren’t enough, even a lion’s tongue is dangerous, even when trying to be nice! The remarkable structure of the cat tongue is so unique and well-adapted to a range of purposes that it inspires the development of new technology.

For example, scientists have designed hairbrushes and pet grooming tools that are more efficient at removing debris and parasites and their eggs, detangling stubborn knots, and even distributing medications or treatments evenly to the scalp or other skin.