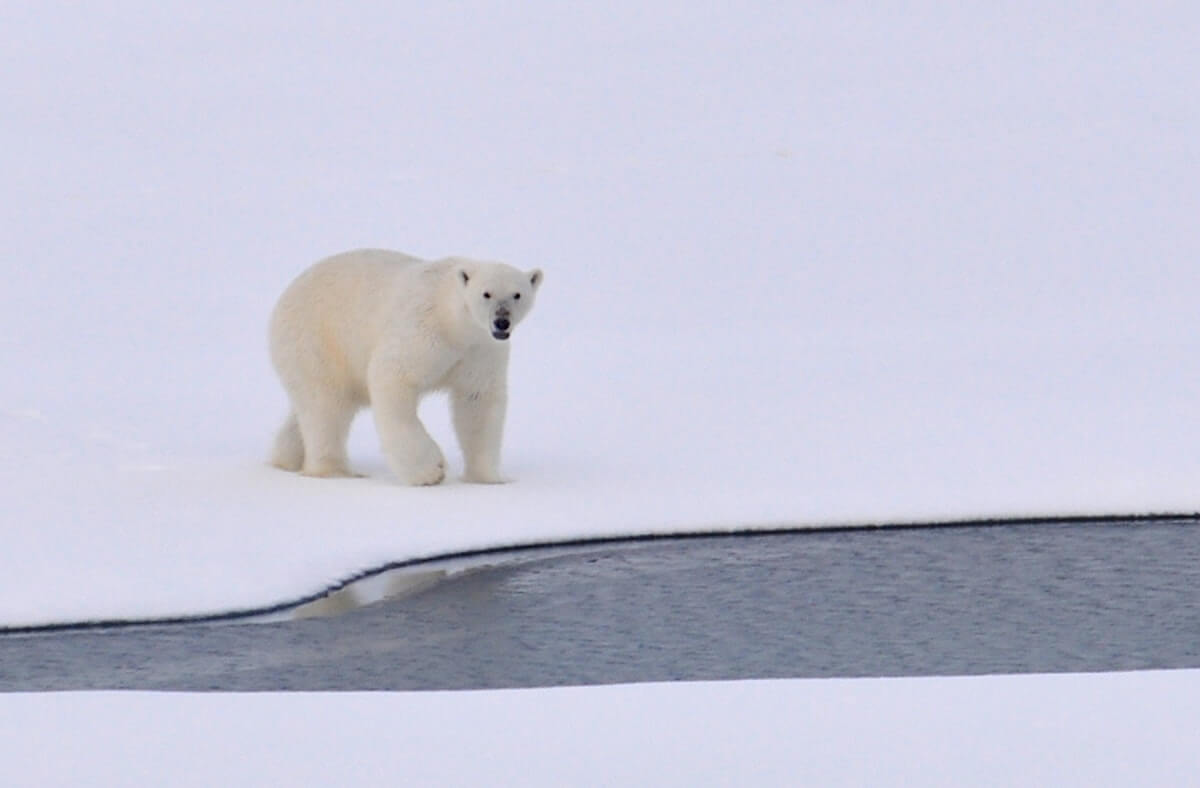 Polar bears belong to a fascinating species of bears, the hyper carnivorous bear. They are the sister species of the brown bear, but they are very much different.

They live within the Arctic Circle, alongside the Arctic Ocean and its surrounding seas and lands. And because they live in a narrow and specific ecological niche, they are fully adapted to live on ice, snow, survive in cold temperatures, and hunt marine life, especially seals.

Polar bears are the giant species of bears, and because of that, many ask the obvious question. How strong are polar bears?

Polar bears are powerfully strong; they are bigger, stronger, and even faster than other bear species. An adult polar bear can weigh up to 1300 pounds and is 10 times stronger than a human. They are so strong they can lift more than 1000 pounds of heavy icebergs.

Keep reading, as we are going to uncover some unreal facts about polar bear strength!

How Strong Are Polar Bears?

Because of their raw power, polar bears are known to be one of the strongest land animals that ever walked the earth.

They are exceptional hunters, and due to not having natural predators, they are also referred to as the kings of the Arctic Circle.

Besides their raw power, polar bears were gifted by mother nature with some superpower abilities. For instance, their smell senses are so devolved they can smell seals from more than a mile away, as well as the ones that are buried under 3 feet of ice. 3 feet of ice, crazy!

Another example is swimming. They regularly swim 30 to 40 miles; however, the longest swimming distance covered was about 430 miles. A female polar bear swam for nine days straight!

On top of that, they have a water repellent thick fur body protection which allows them to shake off the ice that forms after going into freezingly cold water.

Polar bears have five-toed feet equipped with large paws, reaching 12 inches in diameter. Their paws are designed to help them balance, easily hunt seals while on ice, and swim. In water, polar bear paws act as a paddle, while on land they serve as snowshoes.

These bears have evolved to live in the bitterly cold part of the world, which only a few other species inhabit. It is no surprise their legs and paws are powerful.

Polar bear paws are so strong that they have been known to snap the spine of many animals with a single strike.

Their claws are powerful as well, and they are about 3,75 inches long, helping them break thick ice and easily catch and hold onto their prey.

How strong are polar bear jaws?

Polar bear bitting power is frighteningly powerful. With 1200 pounds per square inch they can easily crush the skull of any large animal.

Believe it or not, polar bears have stronger jaws than the grizzly bear, the powerful tiger, and the almighty African lion, king of all animals.

Below are the top 10 of the strongest jaw power in the whole animal kingdom:

How strong are polar bears compared to humans?

Because polar bears are mighty, it is funny to compare them to us humans. But if you want to make the comparison, we will tell you that the average toughness of the human bite is 162 pounds per square inch.

It’s doesn’t seem that powerful. Well, because it isn’t. And the average strength of a polar bear bite as we have mentioned is 1200 pounds per square inch.

A typical adult polar bear weighs from 775 to 1,300 pounds. But also, a grown-up male polar bear can weigh up to 1763 pounds, which is around ten average humans. The females are a lot smaller, but they are still larger than humans, weighing from 330 to 640 pounds.

That answers the question about how strong polar bears are compared to humans? The polar bear is uncomparable stronger than any man alive, and if you ever see one, don’t get near them (even if it’s not that possible to find yourself in that situation).

Another reason why you don’t want to find yourself near a polar bear is that they are the only mammal that will actively hunt humans. Other mammals will do it if they feel endangered, but polar bears will do it just for fun, and accessible food, of course.

Polar bears are recognized as the largest bear species alive on Earth. They are bigger than the brown bear, the Kodiak one.

That being said, polar bears are, in fact, the strongest bear species that are currently alive. Indeed, we won’t see a fight between a polar bear and another bear species because polar bears live isolated on ice rocks floating in the Arctic Ocean.

But if you could see something like that, which species would you put your bet on? I, personally, wouldn’t think twice about who would have ended up as a winner.

How fast can a polar bear run?

Because of their incredible strength, polar bears can run very fast. And you unquestionably wouldn’t imagine these white balls of fur as fast animals.

But a polar bear is as fast as a horse, and we all know that horses are magnificent creatures that can run pretty fast.

The top speed that a polar bear can reach is around 25 miles per hour. It’s unexpected. The fact that they can run that fast, but they can, and they do it when they need to.

They may come to your mind as cute fluffy animals that live with Santa Clause on the North Pole, but polar bears are, in fact, fearless and vigorous animals. They are, in fact, the most extraordinary animals that you can find in the Arctic Circle and the strongest.

They are also the biggest of all bear species and could be called the kings of bears. Polar bears may look cute, but you wouldn’t want to meet one in person.