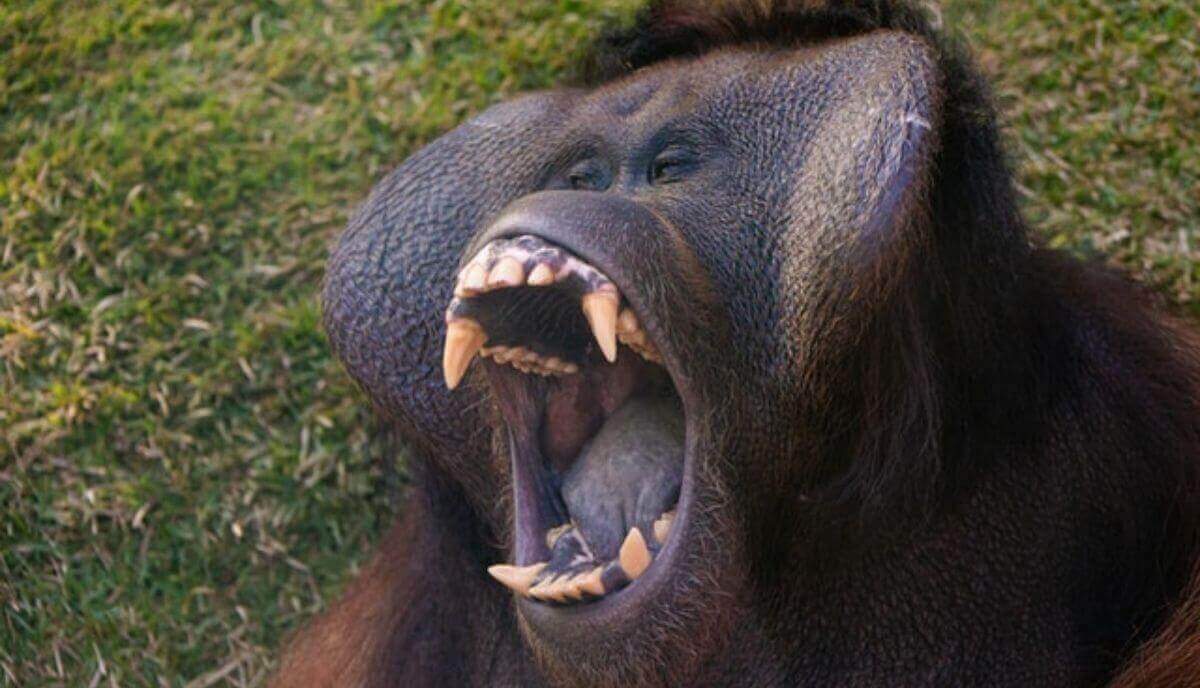 Orangutans are very unique Apes. They spend the largest part of their time in trees, and they also are among the smartest primates.

What many people wonder is – how strong are orangutans?

Orangutans are very strong animals, around seven times stronger than humans. They can lift about 500 pounds and have a bite force of 600 PSI, almost two times the bite force of a leopard. These primates primarily use their arms and shoulders to move through trees, which explains their upper body strength.

Even though they possess tremendous strength, orangutans are the most gentle of all Apes, and they barely ever get into fights as they are solitary animals.

In this article, I will be explaining the strength of the orangutans; and what makes them such strong primates.

The orangutans being quiet and solitary in nature isn’t a sign of weakness or incompetence. Orangutans, on the contrary, live up to the Ape name. They are also strong like other apes.

On rare occasions, orangutan males have been spotted in a fighting contest with each other, usually over their mate. The event was quite a spectacle and an incredible show of strength. It cannot be denied they are indeed stronger than they seem.

But the question is how strong they are and in comparison to what?

How Strong Are Orangutans Compared To Humans?

According to research, orangutans are seven times stronger compared to humans. The muscles in the arm of the orangutan are sturdy, as their main means of locomotion is through the trees, and they need these powerful muscles to carry their weight as they swing from tree to tree.

They can even use their hands to pound on a tree to produce sound… You and I both know we can’t pull that one-off.

An orangutan can even go as far as beating a human being in a tug of war with a little close to no effort; this is a proven fact.

We always had a tendency to compare our strengths with other animals, and perhaps we are stronger than a lot of animal species, but when it comes to orangutans, strength comparison is not an option.

Are Orangutans Stronger Than Gorillas?

Orangutans are not stronger than gorillas. Orangutans are arboreal; their feet were adapted to climbing and aiding swinging from tree to tree than walking on land. Gorillas, on the other hand, are terrestrial animals; they can move fluidly on the ground. Therefore, they have more advantages over the orangutans in ground fighting. Another great hindrance the orangutans will face in a fight with a gorilla is in their teeth.

Their opponents, the gorillas, might resort to using their pointed canines as a weapon, and the orangutans cannot retaliate as there is nothing compared to the lethal canines. Orangutans are heavier in size, but a gorilla is stockier and heavily built.

Although the chances of the paths of these two apes crossing are very unlikely, as they live in different habitats, if they do, the gorilla would beat an orangutan in a fight. Orangutans are strong but not as strong as gorillas.

Are Orangutans Stronger Than Chimps?

Chimps, as opposed to orangutans, are used to violent behavior. They are known to get into physical confrontations with one another regularly. But even though chimps are more experienced fighters, orangutans are much bigger than their counterparts.

Orangutans are much taller than chimps, and they are almost as twice as heavy. So, in a potential brawl between the two, orangutans would come out as winners as they have more muscle mass and strength in general.

The brute strength, in combination with their arboreal lifestyle, would be the main orangutans’ advantage.

However, encountering these primates in the wild is close to impossible because chimps inhabitant the African continent, while orangutans are native to Asia.

How Strong Is An Orangutan’s Grip?

Researchers and biologists say the grip of an orangutan is about (600 PSI) eight times stronger than that of humans. Orangutans have large and long hands, with a thumb directly opposite to the fingers that aid them in gripping onto branches and trees without falling.

Still, the exact numbers cannot be measured with precision and these number serves as a rough guide to estimating their grip strength. However, an average adult orangutan might rip off your shoulder tendons in one powerful yank.

So the next time you visit an orangutan, go in for the hug instead of the handshake to be on the safe side!

How Much Can An Orangutan Lift?

Orangutans can lift up to 500 lb (226 kg) in weight. The heaviest orangutan weighs about 200 lb (90kg), which means it can lift more than two times its body mass.

This is about the size of 7 Olympic dumbells put together!

Of course, an orangutan has never been given a dumbbell to carry. But if they were given one, It’ll be illegal to have an orangutan in a weightlifting competition with humans.

Why Are Orangutans So Strong?

The secret of the orangutan’s strength lies in their powerful arm muscles and flexible hips and shoulders. Moving their weight from tree to tree and sustaining it in mid-air for long periods of time has made these muscles strong and therefore their strength.

However, none of this would be possible without genetics. Orangutans are designed to be strong. Everyday physical activity, in addition to mother nature’s gift, is what makes orangutans so strong.

Despite all that, orangutans are the least aggressive primates. Male orangutans are more prone to aggressive behavior, but for the most part, they rarely utilize their strength, as they live a peaceful solitary lifestyle.

In summary – How Strong Are Orangutans?

Orangutans are some of the strongest apes in the world. Luckily, they are peaceful and solitary animals; if not provoked, the chances of seeing them break into a fight are very slim. They do as much as they can to stay away from trouble.

But if in any case, their indulgence in protecting their mates and status is needed, orangutans may use their remarkable strength and power to protect themselves.

Orangutans have enough strength in their arms to fight off their competition and even a couple of humans if the need arises. Although they are strong compared to us humans, orangutans do not stand a chance against fighting a gorilla except if the gorilla is ailing and on the brink of death.