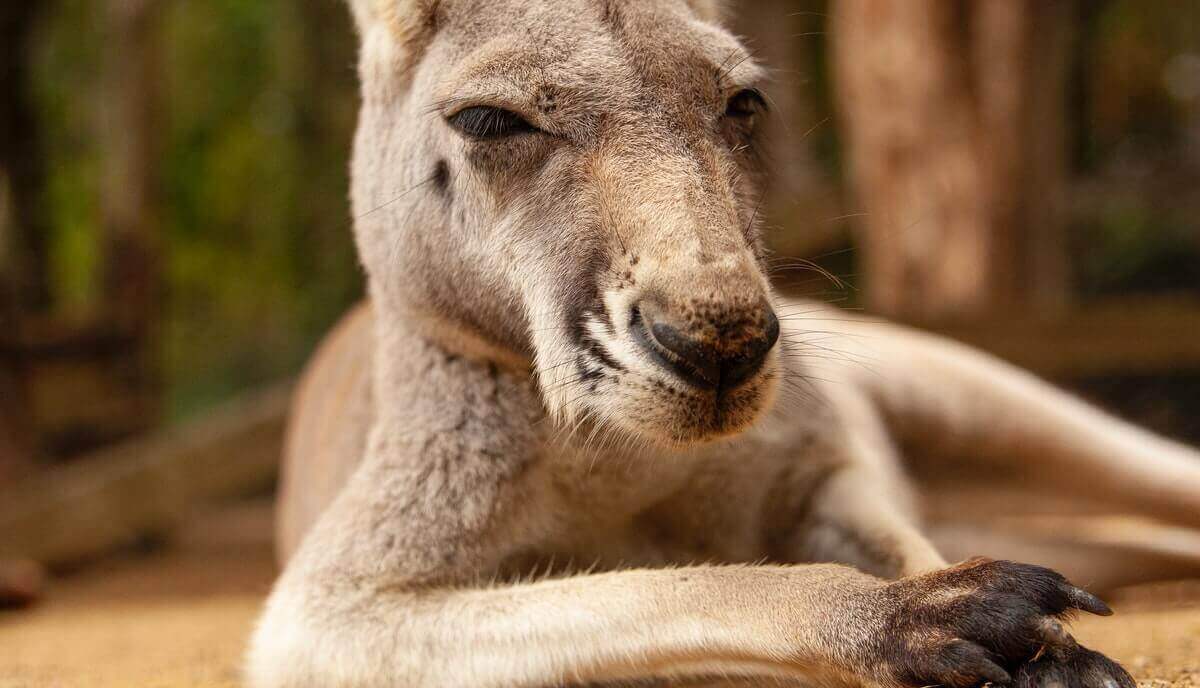 Kangaroos are the largest marsupial on the planet Earth. They are known for their big tail, strong back legs, and huge feet. Kangaroos are also the only large animal that uses hop as their primary way of movement.

They are among the most iconic animals in Australia, but how strong are kangaroos really?

Kangaroos are very strong animals. Their powerful back legs help propel them forward with great speed and agility. Male kangaroos are particularly strong because they never stop growing. As a result, the older a kangaroo gets, the more dominant and stronger it becomes.

This blog post will try to explain how strong kangaroos actually are.

How strong are kangaroo’s legs?

Ever wonder how strong a kangaroo’s legs are? Well, they have one of the strongest hind legs of any animal on earth. They can use these powerful muscles to hop up to 25 feet in one leap!

Kangaroos have large, muscular back legs that help launch them forward and upward on each step. The force of a kangaroo’s powerful leg muscles can be felt as it bounces across the grassy plains or through forests at high speeds.

It’s difficult for us humans to imagine just how much power is exerted by these strong animal’s legs with each bounding leap!

Related Article: How Strong Are LIons?!

How strong is a kangaroo kick?

Kangaroos are one of few animals that uses kick with their hind legs. And they can kick quite hard.

Their legs seem to have the most powerful leg muscles compared to other animals. Which kangaroos primarily use for defending themselves and hopping. But how strong is a kangaroo kick actually?

A single kick from a male kangaroo can send a full-grown man flying through the air. They can deliver 759 pounds of force which is powerful enough to shatter bones.

When threatened by predators like the dingo or tiger snake, these animals use this skill as a defense mechanism. Kangaroo kick is also the most important weapon when fighting against another kangaroo.

Besides their strong kick, the kangaroo’s legs have razor-sharp claws that can rip apart skin with ease.

How fast can a kangaroo run?

Kangaroo can run as fast as 44 miles per hour (71 kilometers per hour) in short bursts. According to the owlcation, kangaroos are the 10th fastest land animal in the world.

Now, what’s interesting is that every animal from the list uses four limbs to run/walk. On the other side, kangaroos only use hind legs to hop as a primary way of moving.

How strong is a kangaroo punch?

Have you ever wondered how strong is a kangaroo punch? Well, you are not alone. The kangaroo has very strange and unique anatomy. They have two hind legs, large powerful tails, and tiny arms that seem useless.

It may seem like there is no way these tiny, little limbs could be of any use to them, but it turns out that their forearms are actually quite strong.

They are used to grab onto branches when they need a break from hopping! Kangaroo arms are also one of the main weapons when fighting another kangaroo.

However, kangaroos use their arms in different defending strategies, other than punching. When attacked by dogs or dingoes, a kangaroo will run in the water and bait them to come in and use its arms to drown them.

How strong are kangaroos tails?

The tail is an important part of a kangaroo’s survival. It serves as the animal’s primary means of balance while hopping. In fact, a kangaroo tail gives as much propulsive power as hind and front legs combined.

Their tails are strong enough to carry their weight of almost 200 pounds. Kangaroos basically use tails as an additional leg. When males are fighting, they will balance on their tails completely, so that they can kick their opponents with legs.

Male kangaroos have twice the thicker skin in the abdomen area, which acts as an extra layer of protection in the fight against another kangaroo.

Kangaroo’s tail length varies by species. The red kangaroos, which are the largest of all kangaroo species, have 35.5 to 43.5 inches long tails (90 to 110 centimeters).

How strong are kangaroos compared to humans?

It is not a simple job to compare the strength of different species. From what we have learned earlier, we can say that kangaroos are buff and strong creatures.

In addition to their natural abilities, wild animals have that extra strength advantage due to everyday survival. An average kangaroo has fought dozens of other kangaroos and survived attacks from many different predators.

An average human is far away from that kind of lifestyle. The only advantage that humans have over kangaroos is arm strength.

Kangaroo arms are their weakest body part, so presumably, an average human has an advantage in that aspect. In every other aspect, a kangaroo is stronger than a human.

If you are not a skilled fighter, try not to go into a brawl with a kangaroo.

The secret behind kangaroo strength lies in its strong back legs, which are designed for jumping distances at high speeds. Kangaroo tail is no less strong; it is powerful enough to support an entire weight if needed.

In addition to that, strength plays an important role in kangaroo mating rights. The stronger and more dominant males become, the more attractive they become to the female kangaroos.